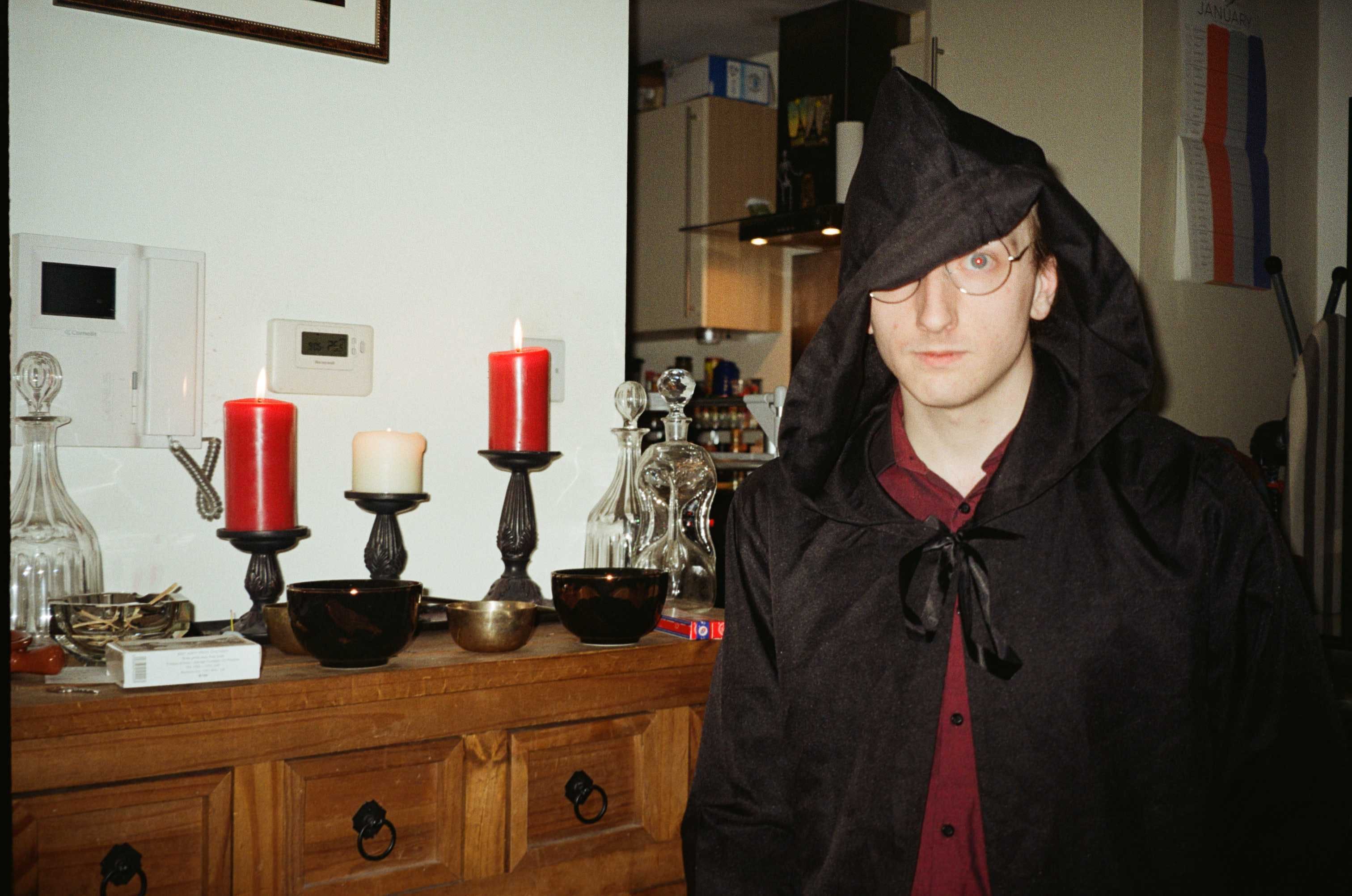 We're sitting drinking in a busy London pub, surrounded by goths and the oh-so-curious. We're not here to chat about The Sisters Of Mercy or Edgar Allan Poe, however. We're here to discuss faith and religion with the Global Order of Satan at one of their public meet-and-greets. “Brexit and Trump turned me into a Satanist,” Andy Diabolus, the co-chapter head explains. “I do think that back in 2015 and ‘16 I was feeling a bit lost. I didn’t know what was going on, so I needed some degree of agency.”

The GoS are self-described as an “independent nontheistic rationalist Satanist religious ministry” and they fell from heaven in 2016. They were originally the British branch of The Satanic Temple (as seen in the documentary Hail Satan?) but formed a splinter group in 2018. The split came after the GoS ran a campaign where they mailed upside-down crucifixes to Bavarian state buildings, a reaction to a law passed in June 2018 that mandated Christian crosses to be hung in the entrance of every Bavarian state building. The Satanic Temple didn’t approve of this – not because of its severity or blasphemous nature, but simply because they hadn’t given it the green light.

The GoS have been building their very own global empire ever since, with chapters in Europe, Australasia and the Middle East.

“It’s a modern way to have a religion without necessarily having all the superstition,” Andy tells us, citing the rebellious figure of Satan in John Milton’s epic poem Paradise Lost as their main inspiration. “What we’re doing is challenging this absolute authority. One of our major things is to challenge overbearing religions, you know? I don’t mind if you’re a Christian or Muslim, I’m not here to stop that. However, if you go to my kid’s school and start pushing the bible on them, and start saying, 'You’ve got to believe this, it’s the one true way,' and so on, then you and I are going to have some words.”

Since the 1960s, Satanism in the USA revolved around Anton LaVey, author of The Satanic Bible and founder of the Church Of Satan. This particular belief system, known as LaVeyan Satanism, was a mixture of Ayn Rand’s Objectivism – a philosophy wherein doing things in your own interest is the most important tenet – and good old-fashioned Occultism; incorporating sex, ritual and magic. Anton died in 1997 but the Church is still going, charging a devilish $255 to join. Since 2013, however, a group called The Satanic Temple have risen and garnered a lot of media attention with their non-theistic, leftist political message. Their biggest campaign, as covered in the aforementioned Hail Satan? documentary, was to erect a Baphomet statue next to a Ten Commandments statue that was set to be built at the Oklahoma State Capitol. The Baphomet statue was an embodiment of their goals around religious diversity and the separation of church and state.

In the UK, however, without a prominent and TV-ready prophet like Anton LaVey, Satanic sects have generally been more underground. The Order Of Nine Angles, for example, are an extreme, far-right group that have haunted the British fringes since the ’60s. Andy refers to them as the “Order of No Members” due to their indefinite membership numbers and niche, complex worldview. He goes on to say that their ideologies, magick and their advocating murder, or “culling”, have no place in his group. Many members of the GoS wear masks in photos and have Satanic pseudonyms, “for safety reasons rather than religious”. That includes everyone included here.

The GoS are non-theistic, which means the followers don’t actually believe in the Devil (or God) at all. So, why are they not just atheists?

“Atheism is very much about what you’re not – you don’t believe in this and that – but Satanism is more like, 'We don’t believe in God, but this is what we do believe and this is what we try to follow,'" Murchadh, a young member, explains as we sit with among other Satanists and drink red wine one evening in a north London flat. He refers to their ‘pillars’, which can be found proudly displayed on their website.

Among them are: ‘Act with empathy, compassion, and wisdom towards yourself and others’ and, ‘All people make mistakes. Allow them to correct those mistakes, as we seek acceptance in others over our own.’

These may seem surprisingly accessible and straight-forward – and they are. The followers tell us that a battle for pluralism and religious freedom is at the heart of their movement, rather than any kind of sacrifice or sorcery you might see in late-night Channel 5 horror films.

Political activism and community projects are part of their Satanism, too. Their presence at the anti-Boris march in December 2019 and their Get Home Safely campaign, are parts of their mission to rehabilitate the image of Satanism and attract like-minded seekers.

“As well as the serious stuff we do fun stuff, too,” Andy insists, "we go on weekends together, go to the pub together. It’s not quite tea and biscuits… it’s more cider and black (laughs).”

As our conversation continues, things get a little stranger as Andy reveals, somewhat confusingly, that they actually do hold rituals and host what they call ‘unbaptisms’ from time to time. He says that the ceremonies – which borrow imagery and ideas from occult and pagan ceremonies – are an important part of the GoS.

“You do a ritual every time you cross a road, you look left, right and left again… They are little ways of making yourself feel comfortable with the world, or declaring things, making statements,” Andy explains. “We’re not conjuring demons, we’re not believing that by doing this we are cursing someone or are affecting other people in a certain way, it’s very personal, it’s for us. We use the trappings of [occultism]. We can use that power, that symbolistic power, rather than any sort of magical power. It’s like your own personal psychodrama.” He goes on to compare it to putting on a play and writing your own lines, explaining that self-affirmations are a big part of it.

The members we meet range from graphic designers to legal sector workers, spanning across a diverse range of ages. Some are ex-Christians, others lifelong atheists, but their connection seems as real and deep as any friendship group.

“Community is the important part. Meeting with people that have the same, if not similar, beliefs to me and then I don’t feel alone anymore,” Murchadh says, earnestly. He continues, telling us that he grew up as a Catholic and has now been a member of the Global Order for three years, joining when was 18 after losing somebody close to him.

We can't help but wonder what role music plays in it all. Did everyone begin by listening to Slayer and drawing pentagrams on their schoolwork (like the rest of us) and then kind of, just, got carried away?

“I started out at boarding school listening to Cradle Of Filth, who I still listen to,” says Crawley, one of the members, smirking as she reminisces. “I used to play it during my mum’s prayer meetings when I was about 16, full blast upstairs at home. There would be Gilded C**t just blaring out as the housemistress showed other parents through the house (laughs).”

Despite their personal enjoyment of metal and gothic music, Andy insisted that they don’t want to be “gatekeepers” nor let the GoS become some exclusive goth club. “I find myself trying to compile playlists that aren’t your average thundering black metal, but there’s a bit of industrial music, or Satanic doo-wop, or pop music or whatever.”

Although they’re not hell-raising devil-worshippers, some of the members we speak with still make sure to separate their personal life from their Satanic social circle. “I’ve still got Christian friends so I’m sensitive towards them,” Crawley says. “If I want to share something on my own private [Facebook] feed I might hide it from them.” Andy echoes this, saying his Christian parents “wouldn’t be too chuffed” if they found out and that he has rehearsed what he’d say to them if they ever were to.

Satanism is going through a renaissance of sorts, and the members we meet at the helm of it seem to be dedicated to cultivating its growth and evolution. Their dedication also stretches to providing a safe, welcoming place for atheists and agnostics that might want to hang out, make friends, have a drink and be part of positive change – both personally and societally.

As our night came to a close, we ask Crawley what she’d say to anyone interested in the group. “Send us a message on Twitter or email us, get in touch so we know that you’re kosher, then come and meet us. We’re not raving, blood-drinking lunatics, we’re normal, nice people,” she smiles, sipping wine, the words Religion Sucks written across her T-shirt.

Despite what you may have seen on TV or in the newspaper, modern Satanism isn't built on a foundation of Lovecraftian rituals, witchcraft or occult practices; the real magic is found in the community that groups like GoS have built, and in their fight for a better, more liberal tomorrow. Hail!