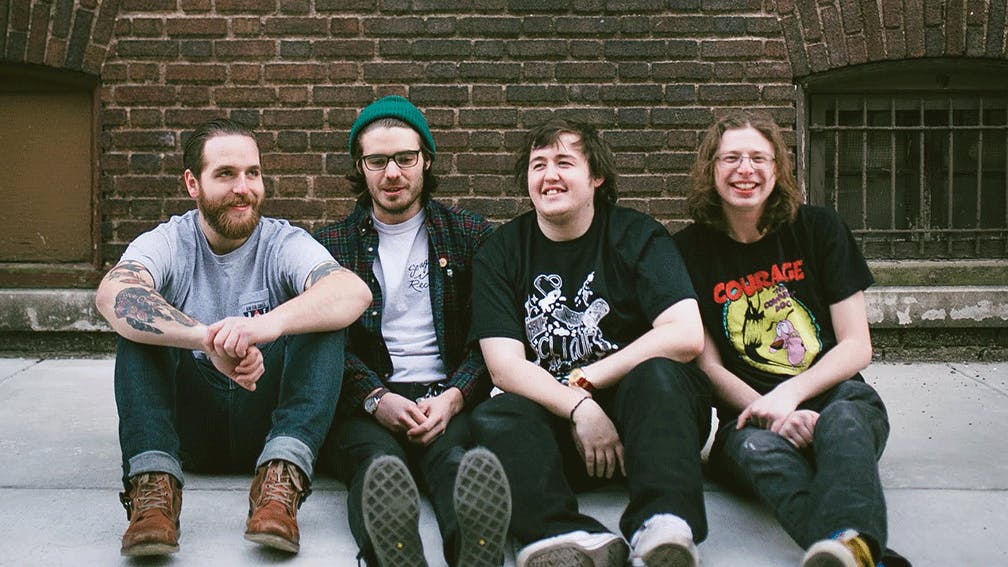 The first time I saw Modern Baseball was in May 2014. Being a relative newcomer to punk and emo at the time, the venue, The Fighting Cocks in Kingston, had so far to me only existed in DIY mythology and the band were little more than a name I’d heard batted around by people far deeper into The Scene than I.

It feels really weird, just three and a half years on, to be writing something that might go down as a eulogy for the band that showed me the true magic of music that night. But, this past weekend in their hometown, Modern Baseball played three farewell shows to signal the start of an indefinite hiatus.

In the short period since that Kingston show, MoBo has been on one hell of a journey. From supporting (and largely upstaging) Real Friends that night, they went on to almost double their venue size every time they came back to the UK, culminating in a couple of thousand fans showing up to their last London show at the Forum. Stateside, they toured with emo legends Brand New and stole the weekend at countless festivals. And in last album, Holy Ghost, they released one of contemporary emo’s greatest records.

They got bigger than a band of four kinda goofy kids from Philadelphia is supposed to and they wrote brilliant songs, but it feels somehow wrong to boil a band like MoBo down to their achievements. As proud as the band will rightfully be of it all, it’s the sincerity with which they did everything that truly defines Modern Baseball’s legacy.

Every lyric that vocalists Brendan Lukens and Jake Ewald wrote, was written entirely from the heart. They told stories of high school awkwardness better than any Judd Apatow movie ever could, and openly discussed topics as sobering as loss and mental health with tact and maturity far beyond their years. Between the two of them, through their shared experiences, the songs that make up MoBo’s discography tell a moving coming of age story that has been used as the soundtrack to the lives of countless people doing just that.

The deep love that Modern Baseball fans have for the band is about so much more than the songs, however. Away from their musical output, the band members were affable, accessible and just as open. In all but the most difficult circumstances, you could easily find at least one of the four of them hanging out at their shows, welcoming and talkative without fail, and when they couldn’t talk to you directly, they’d always be online slinging memes and goofing around.

They were also incredibly open when things weren’t going so well. In August 2015, the band cancelled an upcoming tour of Australia, with Brendan taking to their Facebook to explain that he was taking time away from the band to “focus on making steps towards positive mental health.” Eight months later, he would go into deeper and darker depth about what had transpired in Tripping In The Dark, a documentary about the band directed and produced by longtime collaborator Kyle Thrash, while Jake also opened up about how the loss of his grandfather had affected him. Paragraphs could be dedicated to how that documentary captures the wholesome essence of Modern Baseball perfectly, but your best bet is to just watch it.

The point is, Modern Baseball wore its heart on its sleeve and didn’t mind letting listeners get an up close look at it if that would somehow help with whatever they were going through. For so many people, that’s how they’ll always be remembered; as a band who got them through a hell of a lot.

And now, they’re done. In a Facebook post back in February, Jake stated that the band had become “an immense source of anxiety” for he and his bandmates and that they would be stepping down in order to put their “health and friendships first”. Somehow, though, it almost didn’t feel real. Maybe the suddenness of it made it easier to swallow, like ripping a plaster off. But now that they’ve played these farewell shows and social media has been awash with moving tributes and fans telling their individual Modern Baseball story, it’s really hit home just how much this band mattered.

A band that got so many people through so much, have had to go away at the height of their powers because their own issues became insurmountable. It’s almost not fair in that way. But, in a year that has seen the relationship between musicians and their mental health brought acutely, and tragically, into focus, we can only be thankful that they’re facing those issues head on and doing what’s right for them. Besides, maybe they’ll come back in a few years, healthier and stronger than ever. And if they do, they’ll be welcomed back with open arms.

Til then, good luck to Brendan, Jake, Ian and Sean in whatever’s next. And thanks for everything.

We speak to the man responsible for creating Every Time I Die, The Menzingers and Modern Baseball videos.

Modern Baseball Are Returning To The UK

As well as dropping their fans with a surprise EP, Modern Baseball are returning to the UK for a a string of dates…