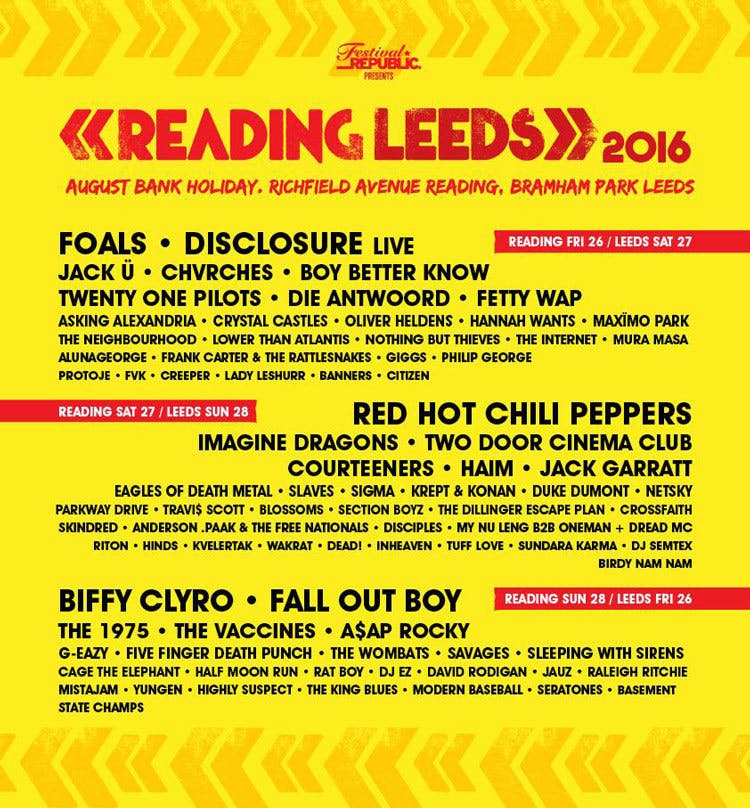 More bands have been added to the Reading & Leeds Festival line-ups.

You were expecting one headliner for Reading & Leeds, but you’re getting two! Yes, it’s official: Biffy Clyro and Fall Out Boy will be co-headlining the festivals this year, joining a host of awesome newly-announced bands.

Speaking exclusively to K!, Biffy Clyro’s Simon Neil says: “To get the news we’re headlining with Fall Out Boy just before we finish the record has given us a right bee in our bonnet! I’m so buzzing and so glad to be able to talk about it, I haven’t been able to fucking mention it to anyone in weeks! We want to make the best record we ever have and now we can imagine ourselves playing these songs onstage. To be sitting at the top of that feels unbelievable, it’s something we don’t get used to and we take the responsibility very seriously. We want our shows to be the best shows! We feel like it was an extraordinary show for us in 2013 and from this moment on we’re figuring how we can make it even better. It’s a healthy fear, you know!”

Likewise, Fall Out Boy’s Pete Wentz tells K!: “I’ll be real honest – we were shutting it down for the summer. We were like, ‘Let’s just take some time and whatever’, and that’s how powerful a co-headline spot at Reading and Leeds is. It pulled us right back in – it’s like that Al Pacino thing: every time I get out you pull me back in! In a really positive way. I’m of no mind that we’re either the coolest band on the planet or the biggest artist on the planet. But, in some ways, we’re one of the few – at least in our country – that is both played on pop radio and plays venues that are like amphitheatres, and I feel like that’s maybe our place, and getting to co-headline Reading & Leeds is a big piece of that, which is very cool.”

As if that wasn’t enough, the festival has also today announced that Five Finger Death Punch, State Champs, Lower Than Atlantis, Skindred, Cage The Elephant, Modern Baseball and The King Blues will all be playing, too!

Check out the full line-up on the poster below!

Reading and Leeds takes place over the August bank holiday weekend between 26 – 28 August, 2016. Weekend tickets are priced at £213 (including booking fees) and are available right now from the Kerrang! Ticket Store.

Pick up the new issue of Kerrang! (out tomorrow) as we speak to Simon Neil and Pete Wentz about Reading & Leeds, what they’ve got planned for the festivals and whether either bands will be debuting new material at the shows…

Be sure to watch our highlights from last year’s festival to get you in the mood for Reading & Leeds 2016:

Finally, in case you forgot just how incredible Biffy Clyro’s Reading & Leeds headline set was in 2013, you might want to read this.