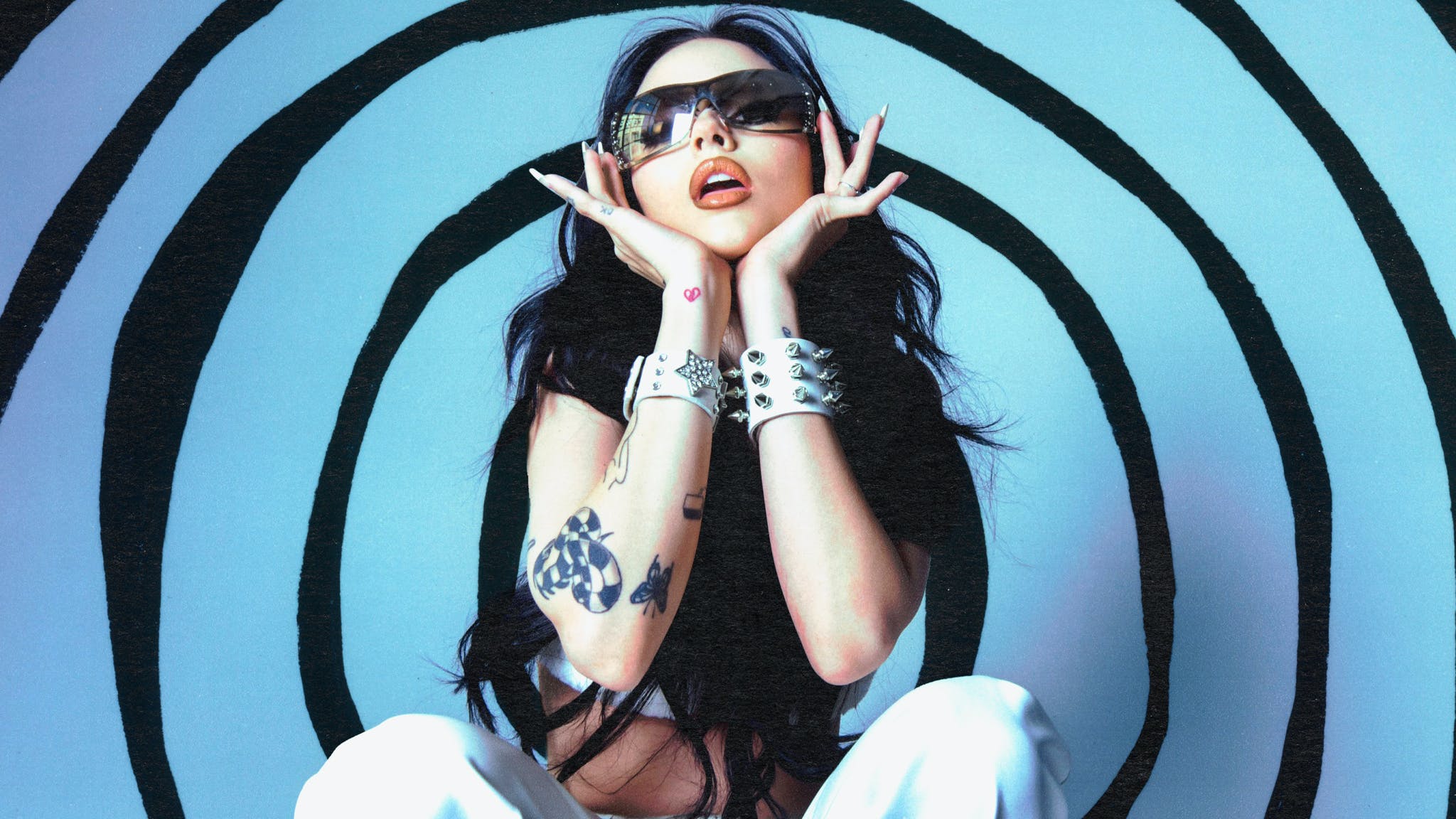 If you haven’t heard of Maggie Lindemann yet, well, you’re probably not as plugged into the internet as everyone else. The 24-year-old hit social media early on (she joined Instagram in 2011 and Tumblr the following year) to perform impromptu covers of Lana Del Rey, Demi Lovato and Melanie Martinez, quickly amassing a huge following. Eventually, her hobby turned into her dream career.

Since then, Maggie has earned praise from the likes of Travis Barker, fellow Who the hell is? star Siiickbrain and Machine Gun Kelly for her own work: a sonic splatter of pop, alt-punk, rock and OG emo. It’s a sound she recently perfected on debut album SUCKERPUNCH following last year’s PARANOIA EP, and it’ll surely keep her star rising further still.

Here, we meet Maggie to find out about her journey to the dark side, her love of experimenting, and how the movie Sucker Punch inspired her debut record…

You grew up in a musical household. How did that shape your sound?
“I’ve always loved rock music. My whole family is a rock family. My dad likes indie and alternative dad rock, and my mom is into metal and Evanescence. She also introduced me to Lady Gaga, Britney Spears and so many people. My brother's a huge metalhead, too. I always wanted to do it, but when I started making music in 2015, it didn’t feel like there was really a place for that. Now, that scene is really coming back.”

You first made your name in pop. Do you think about revisiting that?
“No, I’m still experimental. I don’t want to ever put myself in a box or limit my creativity. I definitely am experimental and will always be experimenting, but I want to stay in this lane. I don’t think I’m ever gonna go into pure pop. I do make pop music, and some of my songs are pop, but I don’t think I’ll ever go full pop or anything like I did before. I think I’ll definitely stay in the rock world forever.”

Where did the concept of your debut album SUCKERPUNCH stem from?
“The movie Sucker Punch inspired the title. I was having a really hard time thinking of a name. With [2021 EP] PARANOIA it was so easy because every song was like, ‘I’m just paranoid.’ With this album, I kept thinking of so many things, but it didn’t feel right. I then saw an edit of the movie Sucker Punch and remembered, ‘I fucking love this movie – it’s so sick!’ It’s all women leads, and I looked up the meaning of the word and it means ‘an unexpected blow or punch’, which is exactly what this whole album is. This whole album is unexpected blows and punches, emotionally and mentally, that kept happening to me over the course of a year.”

How else does it differ from PARANOIA?
“When I think of the differences, PARANOIA is very light. It feels like I’m talking about shit, but it feels very up. SUCKERPUNCH feels darker and there’s more going on. With the album, I just dove into a lot of different things and I was able to tap into a little bit more than I was with PARANOIA. I was also able to experiment more, too. I feel more confident, and I feel like I’m stepping up. And the next album is going to be even more of a step up!”

Have you already been working on the next record, then?
“I’ve done a couple of sessions. I’ve been so focused on this album, and I have so much shit going on still so I’m super-busy. But I’ve started writing it and I have some ideas. It’s still super early in the process, but I have faith in it.”

The SUCKERPUNCH track she knows it was a big moment for you. It was the first time you openly presented your bisexuality in music…
“It was my first song that was about a girl. I’ve never said ‘she’ in a song before, so I really didn’t know what to expect. I didn’t think that people were gonna love it as much as they did; I didn’t think it was gonna mean as much to people as it did. It’s really touching and heartwarming to know that something I put out really meant a lot to people. It’s one of my favourite songs on the album, and I love the music video, too.”

What’s been the biggest lesson you’ve learned from this album overall?
“When I finish any project, I really learn a lot about myself, because I’m able to listen back and really share my thoughts in action. I’ve learned how I like to write and it’s crazy to look back and see the way I was feeling. My biggest takeaway was to stop living for other people, and to live for yourself and everything will be okay. I’m the type of person who doesn’t like life changes; I really like when things stay the same. So that was my biggest takeaway: to just live, and stop worrying about what could happen.”

SUCKERPUNCH is out now. Maggie will play Slam Dunk festival next year at Hatfield Park on May 27 and Leeds Temple Newsam on May 28. Tickets are available now.

Who the hell is?Maggie Lindemann

Straight after supporting PVRIS, Maggie Lindemann will be hitting the road in celebration of her debut album SUCKERPUNCH.