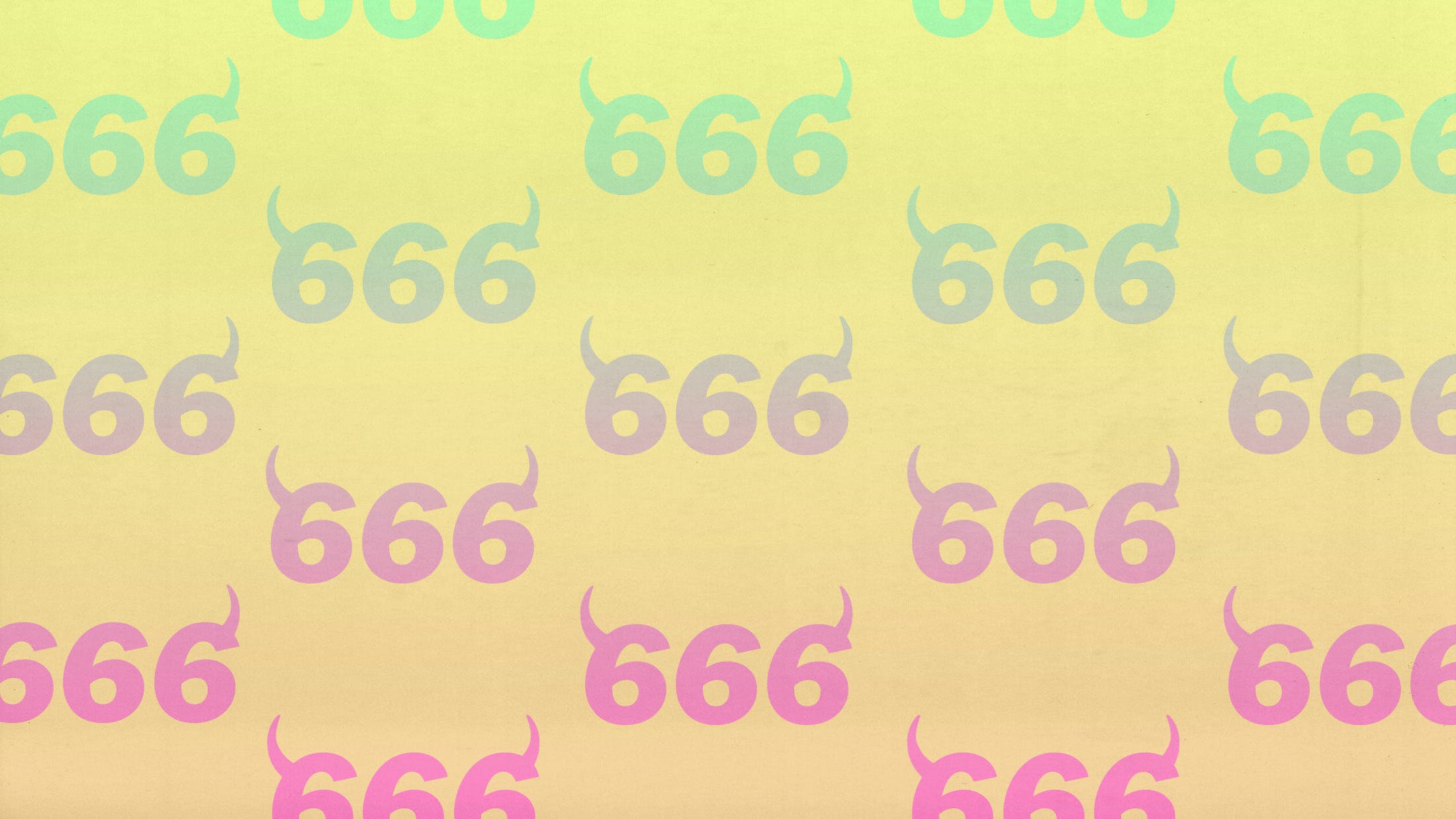 There is no number more metal than six hundred and sixty-six. Thirteen does its best, but there’s something intrinsically metal about 666. It might be the repetition, or it might be that Iron Maiden wrote their third-best song (i.e., the eighth-best song ever written) about it.

But, of course, the rad badness of 666 predates even Maiden, stemming from that eternal bestseller The Bible. The concept of “the number of the beast” (also something a veterinary anaesthetist could refer to oneself as) is introduced in the Book of Revelation: “And that no man might buy or sell, save he that had the mark, or the name of the beast, or the number of his name. Here is wisdom. Let him that hath understanding count the number of the beast: for it is the number of a man; and his number is 666."

Many interpretations of this passage involve a type of numerology called gematria, where letters are assigned values. “Nero Caesar”, emperor of Rome shortly before Revelation was written, and prone to burning Christians, comes out at… 666. It could also potentially be a coded way of referring to Domitian, emperor at the time of writing, by suggesting he was the same as Nero. Either way, if it’s a bit of emperor-bashing, it reads today as extremely subtle.

However, numbers were written as letters back then, and a lot of meaning was given to what certain words totalled out to. It could have been a memo hidden in plain sight, a way of getting a bit of a “Hey, fuck this guy” message across in a way that only those in the know would pick up on.

But it might not even be a thing. Theologians increasingly believe that the actual number of the beast given in the earliest surviving versions of The Bible is in fact 616, and over the years it was changed due to a) repetition being cool; (b) repetition being cool; and c) the number 888 being associated with Jesus and the all-six version following suit because of d) repetition being cool. You can even get 616 from Nero, if you spell his name in the Latin way rather than the Greek one…

The fact is, there’s nothing metal about 616. 666, though, is a cool fucking number. The combination to the lock of cinema’s most famous briefcase, in Pulp Fiction, is of course 666. There’s not a roller derby team in the world in which someone hasn’t bagsied it, Rob Zombie sells foam fingers emblazoned with it, and a whole host of bands from Rotting Christ to Kreator to Billy Talent to Misfits to Against Me! have named songs or albums after it. When Foo Fighters wanted a number to feature in the title of their upcoming horror movie, they didn’t opt for Studio 999, you know?

For a while, Finnair had a regularly scheduled flight 666 to Helsinki, shortened to its airport code HEL. There were 21 occasions where you could board Flight 666 to HEL on Friday 13th. (Maiden, of course, dubbed their round-the-world tour aboard Ed Force One “Flight 666”). After the success of the Terry Pratchett / Neil Gaiman book Good Omens, a sequel was floated with the excellent title 668: Neighbour Of The Beast.

Mathematically, there’s plenty going on with 666. While there’s a lot going on with pretty much any number over a few hundred – it’s either in a bunch of times tables, which feels interesting, or it’s in none and a prime number, which is interesting – 666 has that little bit more going for it.

For a start, it is a triangular number, meaning it can be made by adding successive numbers together – all the numbers from 1 to 36 added together makes 666. On a big enough snooker table, you could rack them up. It’s actually a doubly triangular number, as 36 in itself is a triangular number. Additionally, 666 can be made by adding two square numbers together (21 squared is 441, 15 squared is 225). Actually, more impressive than that, the squares of the first seven prime numbers add up to 666. The Roman numeral for 666 is DCLXVI – one of each number up to 500, in reverse order. It’s also, you know, the same digit three times in a row, which is just kind of fun. Repetition is cool.

The thing with numbers is, once you’re looking for one you can find it anywhere. Numerology has been used to link a bunch of people’s names with the number 666 over the years. People have claimed that a W vaguely resembles a Phoenician six, meaning the internet is evil. The Monster Energy logo has been compared to three of the Hebrew character for 6, vav, joined together. All the numbers on a roulette wheel add up to it – this is because of the triangular number thing detailed above, of course, but if looking for a sign that gambling is evil, there it is. There was a long-running urban legend that 666 was encoded into every barcode in the world, which is of course nonsense. Ronald Reagan had the middle name Wilson – six letters, six letters, six letters. With a bit of mathematical gymnastics you can find it anywhere.

It doesn’t, ultimately mean anything at all. It’s just a cool number. What can you do, though, if you (sensibly) dig that Iron Maiden song but suffer from Hexakosioihexekontahexaphobia – a fear of the number 666? Kerrang! has your back. Just substitute the chorus for the factual statement “235: the dialling code for Chad” and you’re laughing.