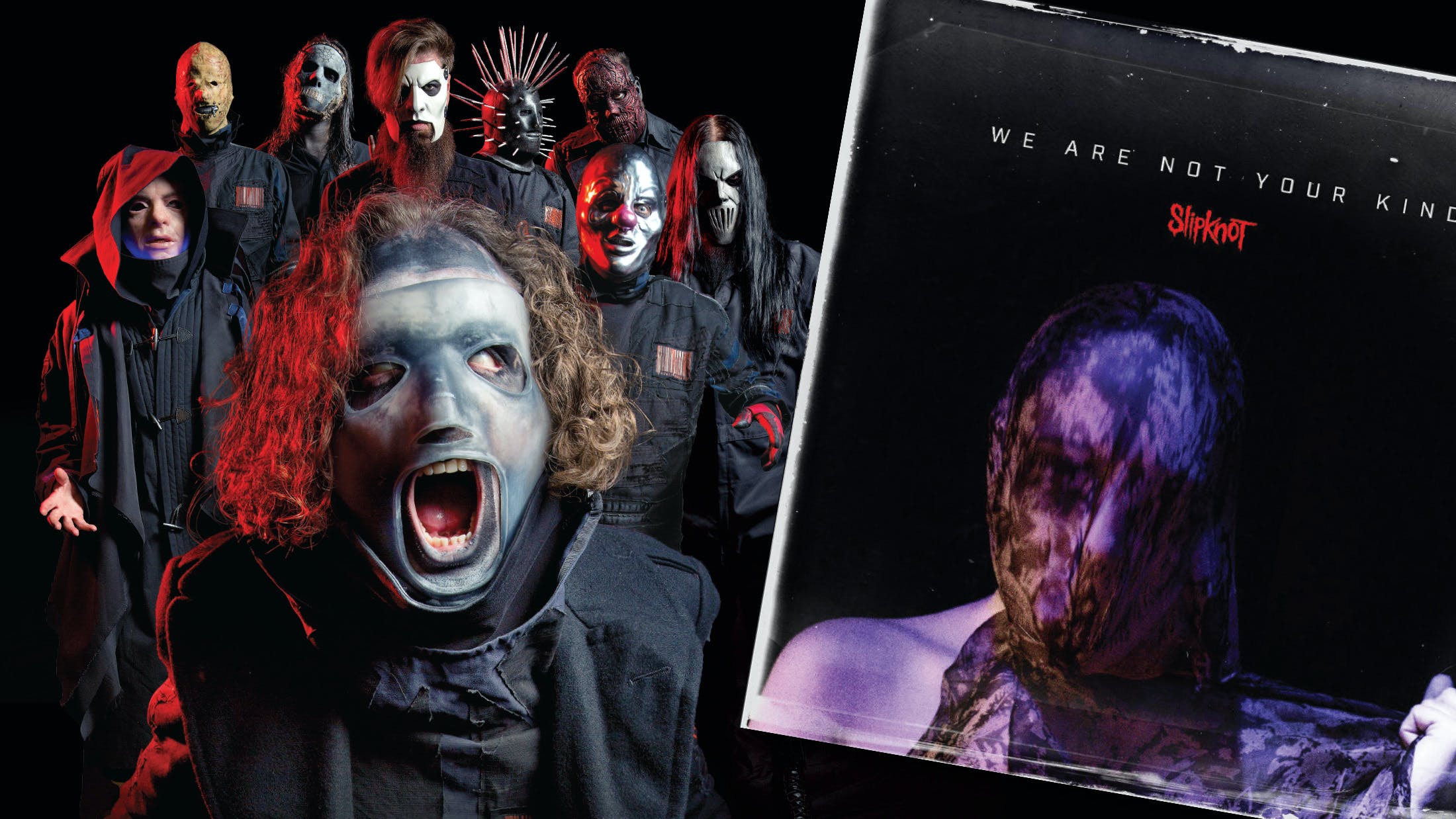 This time last year, Shawn ‘Clown’ Crahan was sat with Kerrang! in a truck on the driveway of his Des Moines home, cryptically alluding to Slipknot’s sixth album – the details of which were still very much under wraps.

“Let me tell you, this one’s biblical,” he smirked in a typically brash and self-assured manner. “You have no idea what’s coming next…”

Hyperbole has often followed Slipknot around – not least because it often comes from the mouth of Clown himself – but in this case, it would turn out to be justified. At the time, the band’s founding member was still working within We Are Not Your Kind’s intensive four-year creative process, finalising plans for The Nine’s elaborate release schedule, as well as their all-new masks and the actual contents of the album itself. In just eight months’ time, he would watch his band’s stunning new album hit Number One in charts across the globe, receive across-the-board critical praise (including the full five Ks from us), and find home in the hearts of Maggots worldwide. Somehow, we sense, Clown saw this coming.

It doesn’t mean the whole experience up until that point was a walk in the park, though. We Are Not Your Kind’s predecessor – .5: The Gray Chapter, released five years prior – had found Slipknot in a difficult situation; not only was it their first record without late bassist Paul Gray or departed drummer Joey Jordison, it was also “thrown together very quickly”, according to guitarist Jim Root. Still, it had been a success, and stood the band in good stead going forwards.

But then Jim and frontman Corey Taylor’s relationship was put to the test as the decision was made to remove the guitarist from the pair’s other band, Stone Sour. On top of that, Slipknot later parted ways with percussionist Chris Fehn in March of this year amidst a messy lawsuit while the album was still being finished. Some fans began to worry if the situation between members was volatile enough to cause serious damage. For any other band, this could have been a disaster. For Slipknot, though, it gave them the sharp, focussed mentality that they had more to prove than ever before, forcing them to grow through the circumstances.

Not wishing to repeat the rush and stress of its predecessor, Clown actually started work on the new album with Jim while in the midst of touring. It was a move that allowed time for it to grow, and upped his enthusiasm for the job.

“We really had the time to build it a lot more than The Gray Chapter,” Jim elaborated. “I was still spreading myself thin between two bands [then], and now I’m not doing that. That was a little bit of the source of my discontent: I was never able to put 100 per cent into one band. I was always juggling two bands, and that spread me so thin that it was making me unhappy.”

With focus refreshed, he and Clown became “the catalysts” for Slipknot’s next era, freely chipping away at demos and song ideas alongside drummer Jay Weinberg.

“They were really able to get so much great music together,” Corey enthused back in May. “When I heard it, it inspired me to go to a place that I haven’t been in a long, long time – and especially with the shit that I was going through in my personal life. It was so good to know that there was a trust there. It was about, ‘We’re on to something here.’”

While Corey noted that “even the bare bones were great”, it was when the band recruited producer Greg Fidelman (Metallica, High On Fire) and began shaping We Are Not Your Kind in the studio that he felt their collective musicality hit the next level.

“As the album started to progress, it went from my understanding of some of these songs being really heavy to, ‘This is a whole new evolution for the band,’” he smiled proudly. “We have these brutal moments of heaviness, and yet these incredible moments of creative and artistic freedom.”

The process put the Slipknot unit in a refreshing and dominating new position, but it took its toll on the frontman. As Corey purged mental demons while also coming to terms with a 2017 divorce, recording the 14 tracks that make up We Are Not Your Kind left him “emotionally spent and physically drained”. He had previously told Kerrang! ahead of the band’s studio time that the album would reach the same heavy wavelength as Slipknot’s iconic 2001 second album Iowa (these words irritatingly ended up following him around), and while this could be clearly heard in the literal sense, there was also a potent emotional weight in the likes of the wounded A Liar’s Funeral and the extreme vulnerability of My Pain.

Of course, the breathtaking ferocity in the likes of Red Flag and Orphan delivered more than enough Maggot-pleasing brutality within the album’s hour-plus running time, but even more gratifying was the sound of Slipknot rediscovering a long-lost sense of musical abandon. Clown was given the floor to take dark and twisted left-turns throughout We Are Not Your Kind’s many brilliant segues, while on album closer Solway Firth, Corey added an English folk twang to his vocals for the first time in his recording career. “Clown was just fucking over the moon,” the vocalist later grinned. “He was like, ‘Dude, that’s my favourite thing you’ve ever done.’”

READ THIS: How well do you know Slipknot's lyrics?

Elsewhere, Slipknot almost went borderline pop on the choruses of Nero Forte and Critical Darling, while enlisting a choir on lead single Unsainted, and bringing back samples reminiscent of their very early days on the ominous, industrial Birth Of The Cruel. It all made for the most energised Slipknot album in over a decade, and a reminder that, for all the hype that came before its release, Slipknot say what they mean, and they mean what they say.

Crucially, too, it also opened up Slipknot to a whole new audience, while also keeping their diehard contingent happy. No mean feat for a band now 20 years into their career.

“The cool thing about this band is that every album has a generation of a group of the fanbase where that’s their Slipknot album,” Corey tells Kerrang! today. “It happened with All Hope Is Gone [2008], it happened with Vol. 3: (The Subliminal Verses) [2004], and it happened with this. It’s cool to watch all of those factions really debate everything. For that album to [go to Number One in the UK album charts] showed me that we’re still growing and we’re expanding past a place we didn’t even realise.”

We Are Not Your Kind is emphatic proof that Slipknot are indeed still growing. And, to go back to Clown’s words back in December last year, we still have no idea what’s coming next.