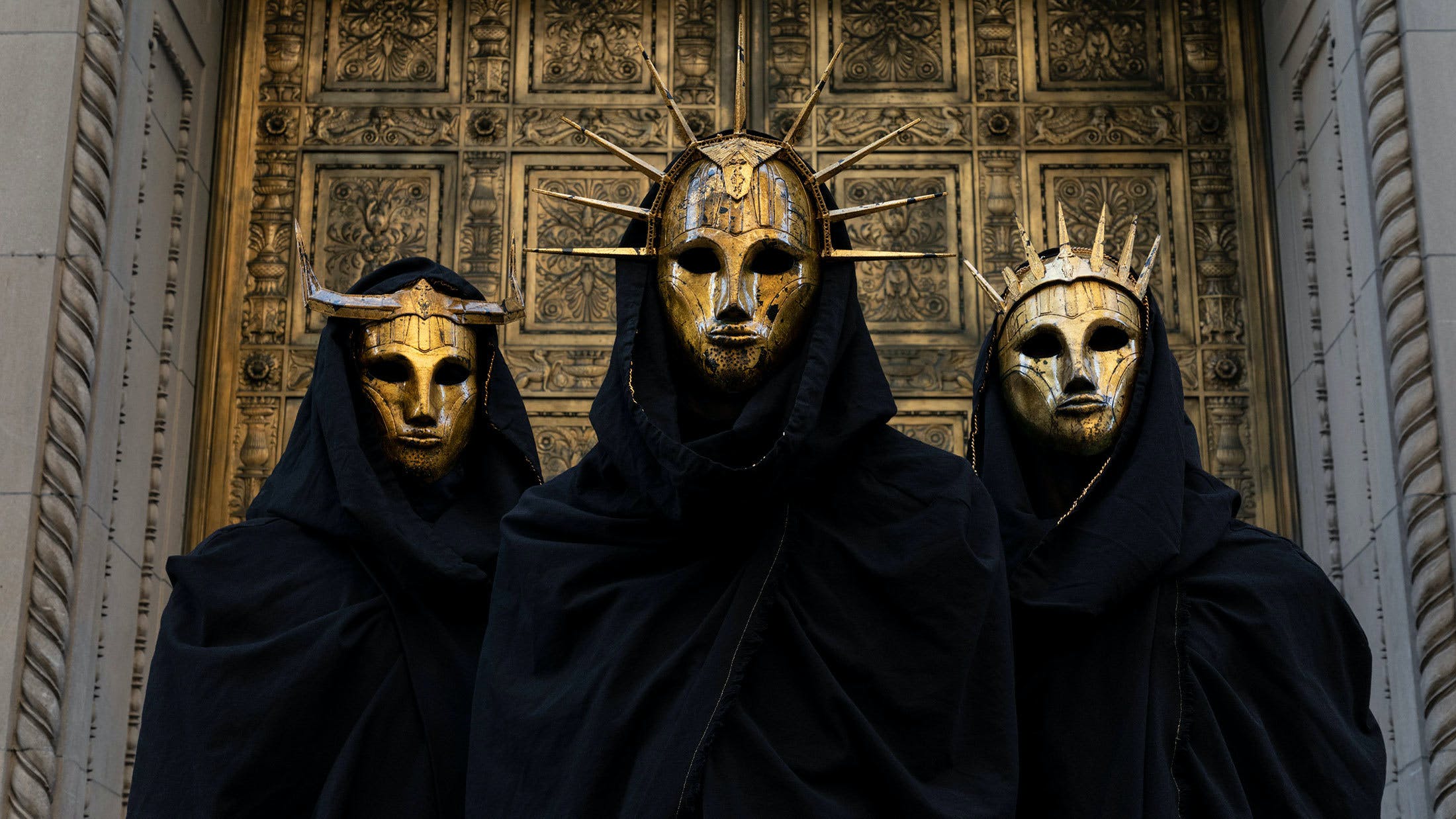 Imperial Triumphant embody the grit and grandeur of their home, New York City. They take inspiration from the metropolis in everything they do – from its Art Deco skyscrapers that inform their artwork and masks, to their mind-bending music that looks back to the golden age of jazz and melds it with avant-garde and extreme metal. In doing this they’ve created a genuinely groundbreaking sound that perfectly soundtracks this terrifying era we find ourselves in: a new Roaring 20s, that are more catastrophic than glorious.

The band’s new album Alphaville is a “retro-futuristic record” of dystopia and fallen empires: it’s almost as if they predicted the pandemic. “If you listen to our music, it does seem like we knew it was coming,” says the band’s founder and singer/guitarist Zachary Ilya Ezrin, talking to Kerrang! from the Big Apple, that he says has lost all its energy due to COVID-19. “We are living in the dystopian present right now.”

Imperial Triumphant was started by Zach back in 2005, but the band as we know it today didn’t properly form until 2012. “Anything before that was just me being a teenager, worshipping second wave black metal and trying to sound like Immortal,” Zach laughs. One thing Zach did keep, though, was the band name: “At the time, I just thought the words sounded cool,” he admits. “But as the band developed, it actually fit perfectly for our aesthetic.”

Zach was always interested in pushing boundaries musically. “I went to music college and studied music composition, mostly scores like classical music from the 1600s up to the present day,” he explains. “I learned a lot about the avant-garde, the extremes of other genres. If you look at the trajectory of classical music and jazz, it starts out very traditional, and then starts to get really, really out-there. I thought, this is the path heavy metal is gonna take, so I’m gonna get ahead of the curve.”

The band have gone through numerous line-up changes over the years, and Zach feels they've now got the perfect fit with fellow New Yorkers Kenny Grohowski (drums, who joined in 2012) and Steve Blanco (bass, who joined in 2015). As Zach says, the three-piece equally share songwriting duties, and his cohorts, who have both played in metal bands but are also professional jazz musicians, have had a significant impact on the development of Imperial Triumphant’s magnificent sound.

“I come from a family of jazz musicians,” Zach says, “but I wasn’t into it growing up. I didn’t appreciate the style until after college. Kenny and Steve’s influence definitely brought it out of me, and kind of solidified where we wanted to go with Imperial Triumphant. It was very organic.”

Alphaville is the second release with this line-up, following 2018’s Vile Luxury, and it’s a dizzyingly creative opus of controlled chaos – the sound of metal being redefined. “We want to find a balance between pushing boundaries and also creating songs that are enjoyable for people to listen to,” Zach explains. “Not just devoting ourselves to absolute chaos. You can get lost in the sauce if you try to be extreme all the time.”

Zach says that with Alphaville they wanted to create a sense of “overwhelming dread”, and they certainly achieve that right from the ominous, spiralling grooves of opening track Rotted Futures. There are unexpected curveballs, too – covers of Voivod and The Residents, the soft jazz interlude that opens Transmission To Mercury, Japanese taiko drumming on City Swine (that also features Meshuggah’s Tomas Haake), and even a barbershop quartet – albeit a slightly creepy one – on Atomic Age. Surely that’s a first – extreme metal meets barbershop?

“We love to surprise our fans,” Zach explains. “I was nervous about the barbershop quartet because it could have been cheesy. But I think it works perfectly – I wanted to set the stage for the song, to take the listener back 70 years.”

The album’s title – Alphaville – comes from Jean-Luc Godard’s 1965 sci-fi/neo-noir film of the same name, set in a dystopian Paris. Although it’s French, Zach felt it applied to the New York state of mind. “Alphaville is French for ‘number one city’,” Zach explains. “It’s a film about a dystopian future, and yet there’s nothing futuristic about the world they present to you. I thought that was so brilliant, that it’s like, this is what this dark future looks like. There are no flying cars or anything like that. I felt like it really applied to 2020 New York City.”

Imperial Triumphant have been finding inspiration in their home city since their second album, 2015’s Abyssal Gods, drawing on everything from the films of Stanley Kubrick to Wall Street. Metal bands using their native soil for inspiration is certainly common, especially in the black metal scene that Zach loved as a teen. But it usually involves the natural world – not a bustling city.

“I’m from New York City, so if I wrote about things like forests and nature it wouldn’t be authentic,” says Zach. “Years ago I met this agent, and he asked me what my band was about, and I couldn’t answer him. I had no idea! So I started asking myself: what do I believe in, what do I give a shit about? And I realised there was a huge source of inspiration in my hometown. The beauty of New York City is that it’s such a cultural melting pot, that we can almost draw inspiration from anywhere in the world. We’re a few albums deep now, and I don't feel like I've dried up the well yet. There are still a lot of ideas we want to play with.”

The visual side of Imperial Triumphant is just as vital as the music. The striking album cover of Alphaville is a lavish vision of a dystopian city, created by Polish artist Zbigniew M. Bielak, who has worked with the likes of Ghost and Watain. “We wanted it to be something complex, but also simple and bold,” Zach explains. “Zbigniew actually reached out to us, which was a huge honour because we love his style. He actually has an architectural background, and we were nerding out about favourite buildings!” The focal point is a grand, gold skyscraper with a face – that’s similar to the mask that Zach wears onstage.

When they play live, all of Imperial Triumphant wear elegant yet sinister Art Deco-style masks with features that represent the member’s individual personalities. While most mask-wearing musicians do so to conceal their identities, for Imperial Triumphant, it’s just another way to immerse the audience further into their world.

“We want to visually represent our music,” explains Zach. “It’s not an anonymous thing. When we step onstage, we want you to see what the music sounds like immediately.” Onstage, the band never speak to their audience – instead, they have a fourth voice that acts as a sort of narrator.

With COVID cancelling their tours for 2020, Imperial Triumphant are adapting to this new era. Unable to film together, they released suitably berserk animated music videos for songs from Alphaville like Rotted Futures and Atomic Age, and are contemplating future plans. All of the band have experience in scoring films, and Zach says they would love for Imperial Triumphant to score music for film, TV or video games.

“I feel like that’s something we could do in this COVID age,” Zach says. “We’re just gonna keep adapting, keep evolving. With everything the band does, we give 110 percent in every opportunity – no matter what.”

Alphaville is out now via Century Media.

The experimental kvltists will visit Europe for the first time this April.