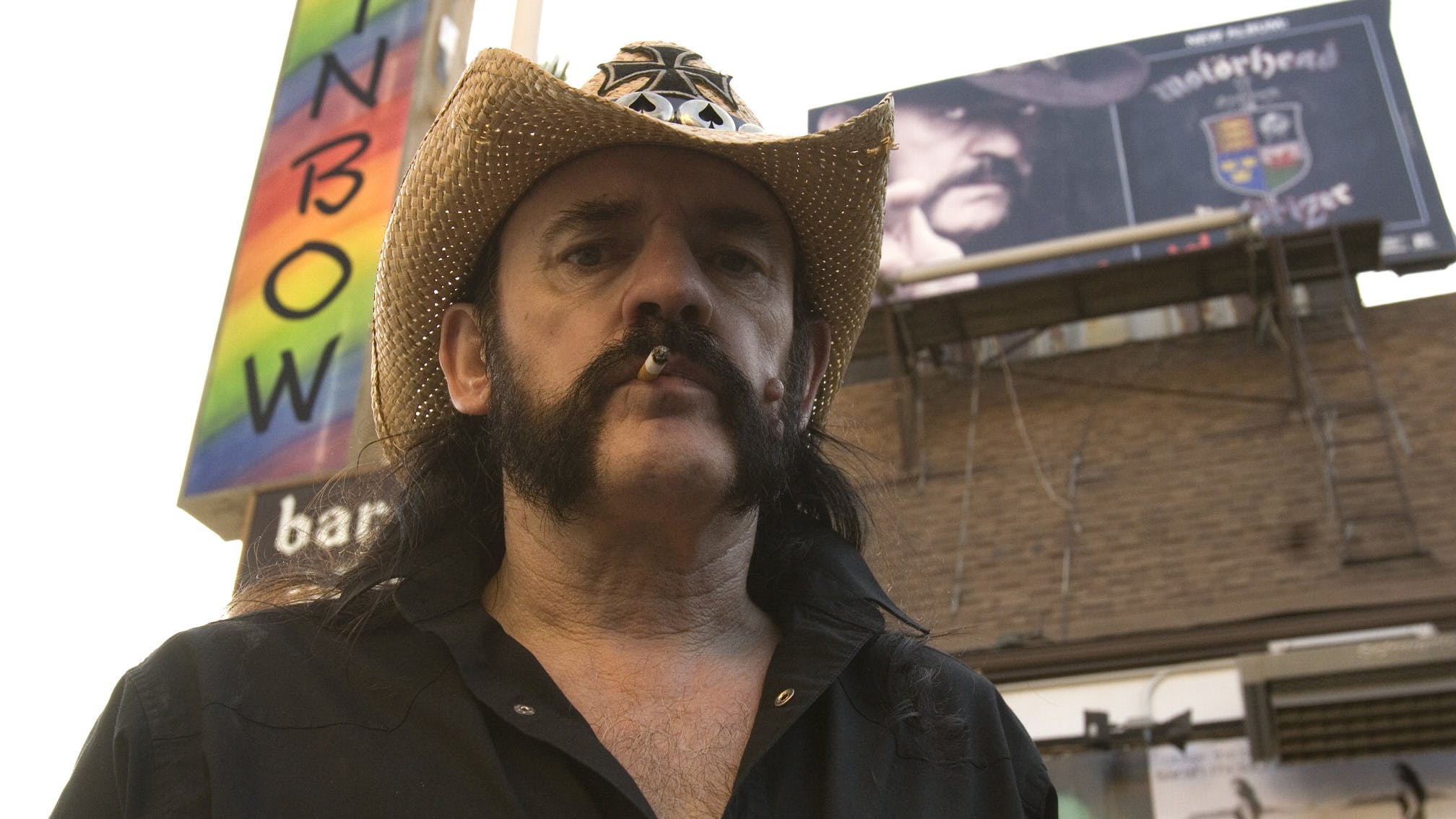 If ever a band truly deserved their own special day, that band would be Motörhead. And while legendary frontman/bassist Lemmy Kilmister would have chuckled at that day being the 8th of May, no doubt suggesting that it only sounds like the Aces Of Spades if you have a mouth full of marshmallows, it's as good a day as any. Let's face it, any day is a good day for Motörhead. All day!

You'll know them, of course, as possibly the greatest rock’n’roll band of all time: relentless road dogs who notched up literally thousands of gigs over their 40 years, untouchable in every respect. And terribly, terribly missed now that they're gone. You'll also know the aforementioned Ace Of Spades – everybody knows it – and Overkill, Bomber, Iron Fist, Killed By Death… there's quite a list. But there's an even bigger list of unsung gems, and it's to those that we look today – the deeper cuts, some of them never played live, but all of them worthy of attention. Your neighbours will want to hear them, too!

It says a great deal about the staying power of 1979’s Overkill album that no less than six of its 10 original songs remained on the setlist right up until the end, with four of them included at Motörhead's final show in December 2015. Surprisingly, Limb From Limb, the closing track from that album, is not one of them. A thorough poke around the internet suggests that it was last played at Ipswich Gaumont in October 1980, which is rather a shame considering it's such a fantastic tune: a ragged, blues-infused slow-burner that suddenly kicks up several gears about halfway through. And what could be better than a guitar solo from Fast Eddie Clarke? Three of the buggers, that's what! Not for nothing is the album called Overkill!

There's a wonderful story in Lemmy's autobiography, White Line Fever, about when Motörhead played a Hell’s Angels show at Hackney Speedway and the Angels took a dislike to then-guitarist Brian Robertson.

“Who's that c**t with the fucking shorts on?”

And they were not alone! Formerly known for playing with Thin Lizzy, Brian was not a popular replacement for Fast Eddie, particularly given his fashion sense – or lack thereof. Like Lemmy said, “Ballet shoes and Motörhead do not mix!” Likewise, his one album with the band, Another Perfect Day, was largely hated at the time – being a vast departure from previous records – but ironically it has become a fan-favourite over the years, arguably one of their finest. Sure, it's the black sheep of the family, and Robbo fit the band like a hippo in a paddling pool, but one only has to hear the bassline on this opening track to know that it's something special and we were all wrong. Top notch, indeed.

So, Brian gets fired, and Motörhead bring in two previously unknown guitarists: Phil Campbell and Mick 'Wurzel' Burston. And then drummer Philthy Animal Taylor quits, which leads to the recruitment of former Saxon sticksman Pete Gill. Such was the record label's lack of faith in the band by this point that they decided to cash-in with a compilation album called No Remorse, but Lemmy insisted on the inclusion of four new tracks, so as not to rip the fans off. Given that one of those tracks was Killed By Death, it's safe to say he proved his point, but for sheer balls-to-the-wall power you can't go wrong with Snaggletooth! ‘Thought I was done for now, well, here's a big surprise / ’Cause I keep coming back, I can't be exorcised!’ Damn right…

Proving that those four new tunes were no fluke, Motörhead released their first full album, Orgasmatron, with the aforementioned line-up in 1986. Granted, it took two years due to contractual bollocks, and Pete Gill only lasted one album, but it was an absolute cracker! Another song that opens with a thunderous bassline, on Nothing Up My Sleeve we find Lemmy sharing his disdain for a young lady who's left him, and somehow referencing comedian/crap magician Tommy Cooper in the process. Many of the songs from this album graced the setlist, specifically Doctor Rock and the title-track, but this tune is still woefully underrated and well worth another listen.

Skipping forward a few years to 1993's aptly-named Bastards, because, well, we can't do ’em all, we find drummer Mikkey Dee behind the kit for his first official album – Philthy having rejoined and then been fired – and the band firing on all cylinders. Indeed, there are a number of classics here, not least the latter-day anthem Born To Raise Hell, later rerecorded with Ice-T and Whitfield Crane, but since we're looking for lesser known songs, let's go with Burner, which was perhaps inspired by the LA riots of ’92. ‘Outside in the distance, the city in the fire / See the houses burning down, mile after mile.' It also ends with an obscure Monty Python reference... ‘Burn her anyway!’ Genius!

Do yourself a favour and dig out the Sacrifice album. Like, now, as you're reading this. And make sure you crank it up good and loud. Isn't that wonderful? Seriously, there's not a bad track on the thing, and, strangely, pretty much all of them fit the criterion for lesser known songs by the band. An entire album criminally overlooked! Sadly, it was to be Wurzel's last with Motörhead, his input in its making apparently minimal, and Out Of The Sun his last solo, but it ranks easily among their greatest works – up there with Ace Of Spades and all. Like Lemmy wrote on the sleeve notes: “This is a very good album. Put it in your system and girlfriend's clothes fall off.”

Fast-forward some more – Overnight Sensation (1996), Snake Bite Love (1998), We Are Motörhead (2000), Hammered (2002) – and let's pause for a moment on 2004's Inferno to ‘get a little booty on the side’. To be fair, Whorehouse Blues, the closing track, isn't perhaps as overlooked as the likes of Keys To The Kingdom and Down On Me, especially since it was played live a fair bit, often as an encore, including at their final show. But it's certainly something a little different, a country/blues song, with all the band members (including Mikkey Dee) playing acoustic guitar and Lemmy throwing in some harmonica. ‘You know we ain't too good looking / But we are satisfied,’ he growls contentedly. ‘Can we go now?’ says Phil Campbell at the end. No, mate, not for another 11 years…

Speaking of something a little different, it wasn't entirely unknown for Motörhead to play the occasional ballad, nor for Lemmy to sing about his loathing of religion, but here we find both. And let's not forget that he was an outstanding lyricist, so while the song may lack power in the traditional sense, it is nonetheless fucking powerful. ‘Let the sword of reason shine / Let us be free of prayer and shrine / God's face is hidden, turned away / He never has a word to say.’ We can't find any instance of it ever being played live, but you should probably play it now.

And so to Motörhead's penultimate album, Aftershock, from 2013. Another solid work, and another one that's largely unknown to all but the most faithful fans. Admittedly, there were – and are – an army of them, with the record landing at 22 in the Billboard 200 and bothering the Top 10 in some European countries, but aside from Lost Woman Blues, few of these songs made it to the setlist and deserve more recognition. Lem was ill by this point, the years of hard living finally catching up with him, although he was still very much capable of offering sage advice. ‘Do what you soul demands / Your future is in your hands…’ He was rarely wrong.

In some ways the final album, Bad Magic, is a difficult listen. Not because it's anything less than awesome, of course, but because on songs like Till The End and maybe even this one, you can hear that Lemmy knew he didn't have long left. Far better to treat the music here the way he would have wanted, as a celebration of a life well-lived, with no regrets. And what better way to celebrate than by putting out such an incredible swan-song? Again, there's not a bad track, all of them barn-burners, perhaps none more so than Thunder And Lightning. Classic Motörhead! All guns blazing! How the hell is this the sound of a man approaching 70 and approaching death? It's not! It's the sound of immortality because Motörhead will live forever!