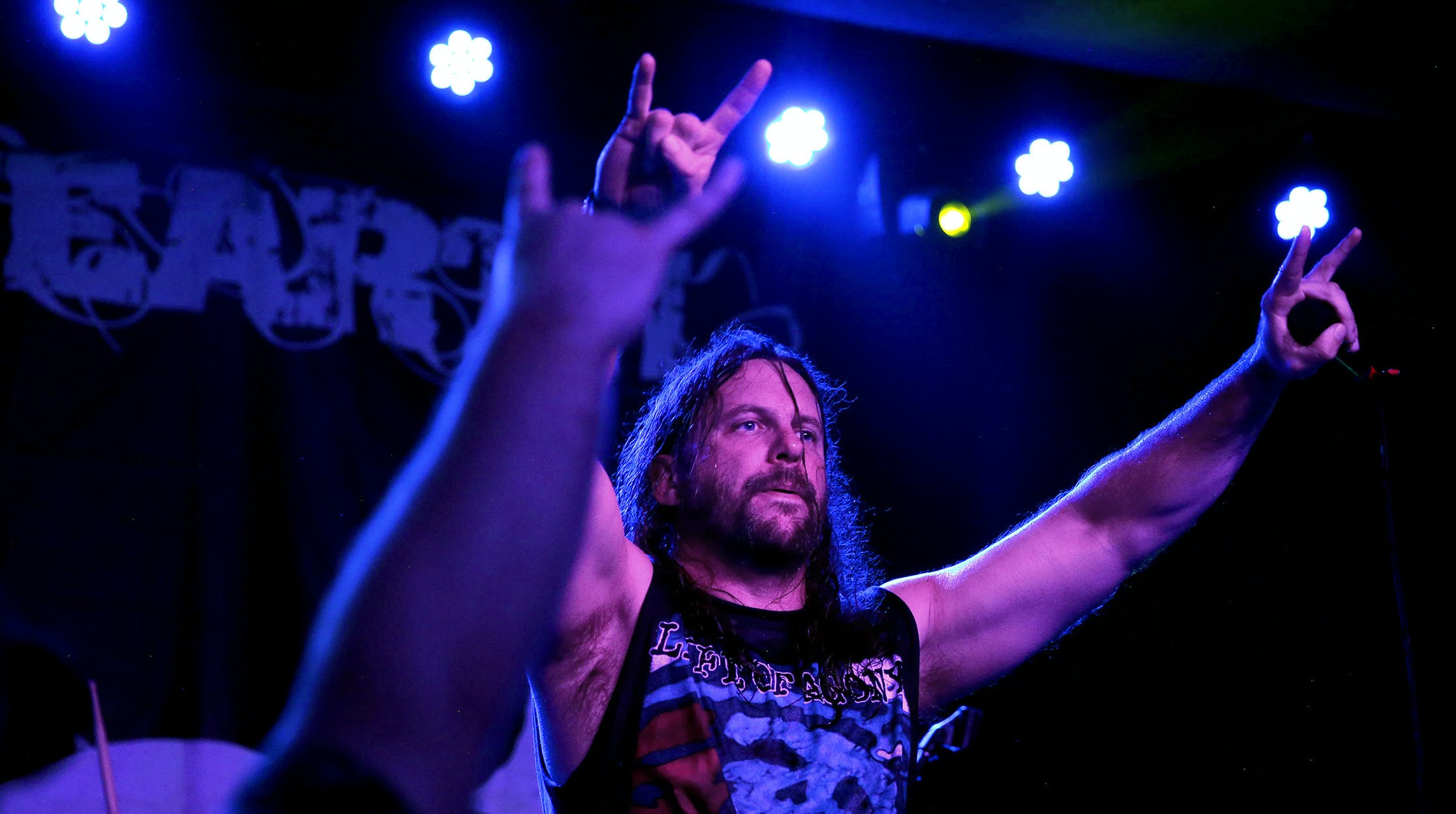 Unearth are a rarity in heavy music: a long-running band who have been pretty fucking great the entire time. While the band's metalcore peers have come and gone, the Boston-based heavy-hitters have stuck to their guns and delivered one merciless album after another. Now, as Unearth tours in support of their upcoming new record Extinction(s), one doesn’t doubt their talent, only what else they have in store.

“I think I’m most excited for people to hear the overall energy of [the new album],” says frontman Trevor Phipps a few hours before the band’s show alongside Fit For An Autopsy, The Agony Scene, and Traitors at Brooklyn’s Saint Vitus Bar. “We wanted to bring it back to the energy from our first records, and now we’ve obviously grown as musicians since. We truly feel this record is our best record ever.”

This isn't just a brag. The Vitus show is sold out, the place is packed, everyone’s straight-up hammered, and the band’s set is phenomenal. Metalcore may have its designated place nestled between Limp Bizkit and Deafheaven in today’s modern metal timeline, but catching Unearth live proves that this now-classic genre is still alive and kicking.

Here are 10 things Unearth taught us about the state of metalcore today:

FANS ARE STILL HUNGRY FOR METALCORE, AND THEY WON'T LET THE HEALTH INSPECTOR STOP THEM FROM GETTING IT

The venue is packed for Unearth, and several ticket-less fans are turned away at the door. There are even scalpers outside catcalling for extras – not something you normally see at this small Greenpoint venue.

Even crazier is what happens when the health inspector decides to make a surprise visit (the general grumble is that a disgruntled neighbor called it in). With set times pushed back and a No Re-Entry rule instated, one might assume several fans would just bail on the show. Instead, everyone packs inside the club, turning Vitus into a sweaty, crowded free-for-all that proves fans are still ready to forgo creature comforts in the name of seeing Unearth live.

Trevor can’t say enough about Fit For An Autopsy guitarist and producer extraordinaire Will Putney, who produced the band’s latest album. “He pitched to us on strengths – he's a fan from back in the day, and wanted to fill this album with his favorite parts of Unearth,” says Trevor. “He had great ideas musically, too – we’d have a song that was lacking structure, and we’d have a part that we didn’t know what to do with. He’d say, 'Put it right here', and suddenly we had that song. I really do think he helped us, and we worked really well with him.”

Will’s at the show with FFAA; though he doesn’t play live with the band, he helps them deal with the health inspector bullshit and set up onstage – further proof that this dude is all about keeping great music alive.

A LOT OF THE WORLD IS STILL STOKED ABOUT METALCORE

It can be easy for American and UK audiences to think of the “metalcore thing” as over given how many of those bands crashed and burned. But according to Trevor, part of the reason Unearth took longer between records this time around than ever before was to explore hungry new audiences: “The last record gave us opportunities in certain territories. The records did very well in Europe, so we wanted to tour there extensively. And it also did very well in Southeast Asia. We finally toured Indonesia, and then got to play in China again. It definitely opened things up for us.”

Since their last album, Trevor has become a father of two, but the cultural cliche that becoming a parent turns badass rockers into fuddy-duddies seems patently false: onstage, Phipps seems surer and more ferocious than ever before.

In Trevor's eyes, having children has also helped him grow as a musician in vital ways. “It’s definitely helped me vocally,” he says. “When my daughter was born, I was at home with her, and I picked up the guitar again. I’d fumbled with it, but I’d never learned how to play. This time, I learned from some videos on YouTube, and I figured out how to play for her, and started singing for her as well.”

Forget what the term ‘metalcore’ came to represent – this music is about big, juicy riff steaks that combine the listener’s love of death metal, thrash, and even NWOBHM. All of the night’s bands drive this home, playing songs fueled by huge riffs and awesome guitar harmonies that get the crowd headbanging and throwing the horns like some old-school heshers. The extraneous keyboards and whiny emo warbling were just latter-day additions to the sound; the power of the riff is what compels these axmen.

THE MOST ENJOYABLE METALCORE IS THE STUFF THAT WORKS LIVE

Unearth’s new album is cutthroat and gripping at a listen, but it’s nothing compared to seeing them perform live. The band's Brooklyn set is a whirlwind of raw power and sheer brutality.

According to Trevor, that energy is what set the band’s new album apart from its previous one, and what makes the new one their best. “I feel [2014's Watchers Of Rule] was a statement for us,” he says. “It had to be the fastest, the heaviest, the most driving – but that record didn’t translate well live for us. We love that record, but live… it didn’t go over like a bag of dicks, but it wasn’t what we were used to.”

SIMILARLY, THE BANDS WHO CAN KILL IT LIVE ARE THE ONES WHO SURVIVE

An obvious question for Trevor is, why have Unearth survived where others don’t? And there's no hesitation in his answer: “I think it’s always been our live shows. Our records do well, but they don’t go gold or anything – and yet people keep coming to see us live. We’ve always had the most fun times going off onstage. Even when we have an inter-band squabble, when we get onstage, it doesn’t matter. Suddenly we’re hugging each other, drinking beers. Some bands can’t do that. And look, it’s cool to have a record that you only listen at home. But we’re all about the live performance.”

SMALLER METAL VENUES ARE WHERE METALCORE WILL THRIVE… AGAIN

Most metalheads have seen Unearth live at some point in their concert careers – the band has been around for almost 20 years, and have toured with the likes of Slayer, Megadeth, Killswitch Engage, Lamb Of God, and even Dimmu Borgir.

That said, the metalcore boom of the early 2000s made it so most metalheads probably caught Unearth playing on a mid-to-large venue with a capacity of about 1,000. But Saint Vitus’ tight 350-person cap means no-one is safe from throttle and surge of the music. It’s a healthy reminder that metalcore was gestated in beer-soaked bars and clubs full of local kids, and that the music still sounds bigger and more powerful in those kinds of caverns.

THE VETERANS ARE EXCITED FOR THE NEXT GENERATION

A dude who’s toured with his band for nineteen years has every right to just jam the same few Slayer records and ignore all this hipster shit these damn kids are into today. Not so much with Trevor, who’s quick to describe how excited he is to hear metal rediscover its roots.

“It’s interesting to see how, as things change, certain things recycle themselves,” says Trevor. “There’s a lot of music out there right now that sounds like it could’ve been made in the late ’90s or early 2000s. Five or 6 years ago, you might’ve used ‘metalcore’ or ‘deathcore’ as dirty words, but here are these bands who are making it fresh. Bands like Knocked Loose, Power Trip, Gatecreeper, they don’t sound like copycats, they feel like they’re from that era. They’re recycling it, but in an original way.”

When Unearth finally take the stage at Vitus, the crowd starts at a solid Apeshit and only goes harder and louder from there. The band feeds off the energy and spits it right back out at them via crushing renditions of tracks like My Will Be Done, Watch It Burn, and The Swarm, creating a cycle of excitement and punishment that turns the tightly-pressed crowd into a humid, roiling mass of gleeful destruction. The whole thing rules, and leaves everyone hungry for another twenty years' worth of Unearth shows.

Make sure to catch the band with Fit For An Autopsy, The Agony Scene, and Traitors at one of the remaining dates below: