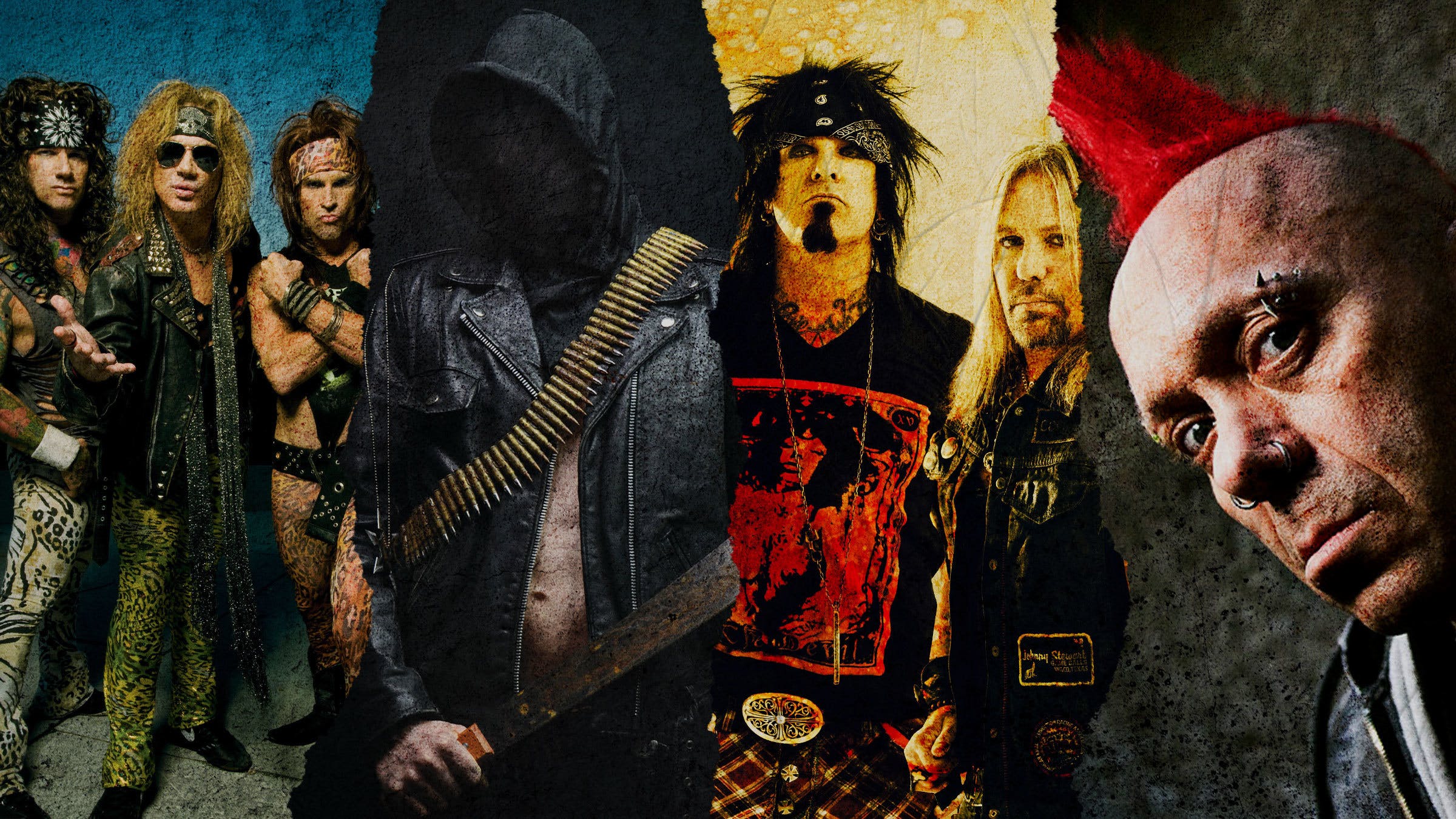 According to most dictionaries, the word 'sleaze' is usually employed in reference to politicians behaving in a corrupt or immoral fashion. Which, let's face it, is nothing new. If they're not involved with some kind of shady deal or belching out empty promises, then more often than not, they're getting caught with their pants down and an amyl-soaked orange in their mouths five minutes after blathering on about family values.

Here in the world of rock'n'roll, we are at least a little more honest about such things. Indeed, there are countless bands who have made entire careers out of such sleazy behaviour and entire albums singing about it. Hell, there's an entire genre called 'sleaze rock'. And why not? Why should politicians have all the fun? Nothing wrong with a bit of sleaze, so long as it's consensual.

Today, then, we celebrate this depravity with a selection of the finest tunes about all things dirty, rotten, filthy, and sleazy. Doubtless you can come up with hundreds more, but here's a few of the best.

Mötley Crüe – She Goes Down

The Dwarves – Fuck 'Em All

Purveyors of perversion since the mid-’80s, those lovable lunatics The Dwarves have no shortage of sleazy songs at their disposal. Let's Fuck, Sluts Of The USA, I Masturbate Me, Let's Get High And Fuck Some Sluts… it's safe to say that we have choices. But let's go with a tasteful number called Fuck ’Em All, from the equal tasteful Thank Heaven For Little Girls album, in which frontman Blag Dahlia brags -- as ever -- about his sexual conquests, saying, 'It seems like balling bitches / That's all I ever do / Hey, you better watch your ass / I'll fuck that, too!' Don't say you weren't warned.

Nickelback – Something In Your Mouth

Like anyone else with a fully functioning pair of ears, you may have avoided Nickelback like a $10 hooker, so it comes as something of a surprise to find them on any list at all, let alone this one. But the fact that frontman Chad Kroeger featured on a track by Steel Panther called It Won't Suck Itself should offer a clue that perhaps these Canadians aren't quite a squeaky clean as you might have thought. Something In Your Mouth suggest that it still won't suck itself.

What young lady wouldn't like some jewelry from a nice Southern gentleman? Except it rapidly becomes apparent that this track from the Top's 1981 album El Loco has nothing to do with expensive gifts, and refers to something rather more cheap. 'That's not the jewelry she was talking about / And it really don't cost that much,' reveals the last verse, in case you hadn't guessed. Remarkably, the song went to Number 28 in the Billboard Rock tracks chart, but you'd best keep your safe search on if you want to Google it.

Surely you didn't think we'd forget Steel Panther? Again, it was more a matter of which song to choose when it's hard to find one that doesn't qualify as sleazy. The Shocker, if you're blissfully unaware of it, refers to what is otherwise known as “two in the pink, one in the stink”. Hopefully we don't need to be any more specific than that, but rest assured you can, according to the song, do it in your bathroom, your car, or even in the alley right behind the bar. Doubtless Steel Panther speak from experience.

Jackyl – She Loves My Cock

A year after Geffen records imprint DGC released Nirvana's classic Nevermind, Geffen put out Jackyl's not-so-classic self-titled debut, which featured She Loves My Cock as its closing track. Which probably says something profound and rather depressing about record labels. Subtle, this is not. Christ, it's so far from subtle that NASA would have trouble reaching it. But, hey, we're talking sleaze here, not art, and there are few songs more sleazy than this. We can safely assume that no one ever lost their virginity to this old chestnut.

Despite an entire genre being dedicated to sleaze, it's not just the sleaze rockers who can get, er, sleazy, as proven by Cleveland black rock 'n' roll nutters Midnight on this dirt-encrusted ditty from 2011's Satanic Royalty. The track is a tender ballad...oh, who are we kidding: clearly influenced by Motörhead and Venom, this lot are about as tender as beef jerky. 'Tonight oh I've been waitin' / That's right just wait and see / The sound of seed as it seeps from your slit / The only gash I'll ever need.' And that's just the first verse! Surprisingly, the ladies seem to love them, including several who have the bands logo tattooed on their tits.

Featured on Zappa's Over-Nite Sensation album of 1973, Dinah-Moe Humm is a bizarre ditty in which a woman bets the narrator $40 that he can't make her… achieve something that rhymes with Humm. The woman then gets off on watching the narrator shag her sister. Believe it or not, backing vocals were provided by Tina Turner! Not that Zappa wasn't known for weird and dirty tunes. Most of this album concerns making the beast with two backs, and on the 1979 song Broken Hearts Are For Assholes, he recommends 'ramming it up the poop chute'.

Lords Of Acid – Scrood Bi U

'I wanna be screwed by you / But anyone else will do,' sings Deborah Ostrega, on this track from Lords Of Acid's Farstucker album, bluntly indicating that it's not just men who like a bit of sleaze. Indeed, with songs like Sex Bomb, Sit On My Face, and Rough Sex, it's fair to say that these Belgian/American techno-rockers are rather keen on the bedtime boogie. That said, they also have a song about getting crabs, so caution is advised.

Another band whose catalogue of coitus knows no end, and, yes, another song about chewing on the ol' meat popsicle. Apparently, this was the first song written with AC/DC's then-new singer Brian Johnson after the death of former frontman Bon Scott in February 1980. But given earlier songs like Go Down, The Jack, and Whole Lotta Rosie, it wasn't exactly a massive departure from their previous work. The album from whence it came -- Back In Black, in case you've suddenly been beamed down from another planet -- spent five months at the top of the U.S. charts and has sold in excess of 50 million copies. We can only guess how many people steamed up the backseat of a Chevy Impala to it.