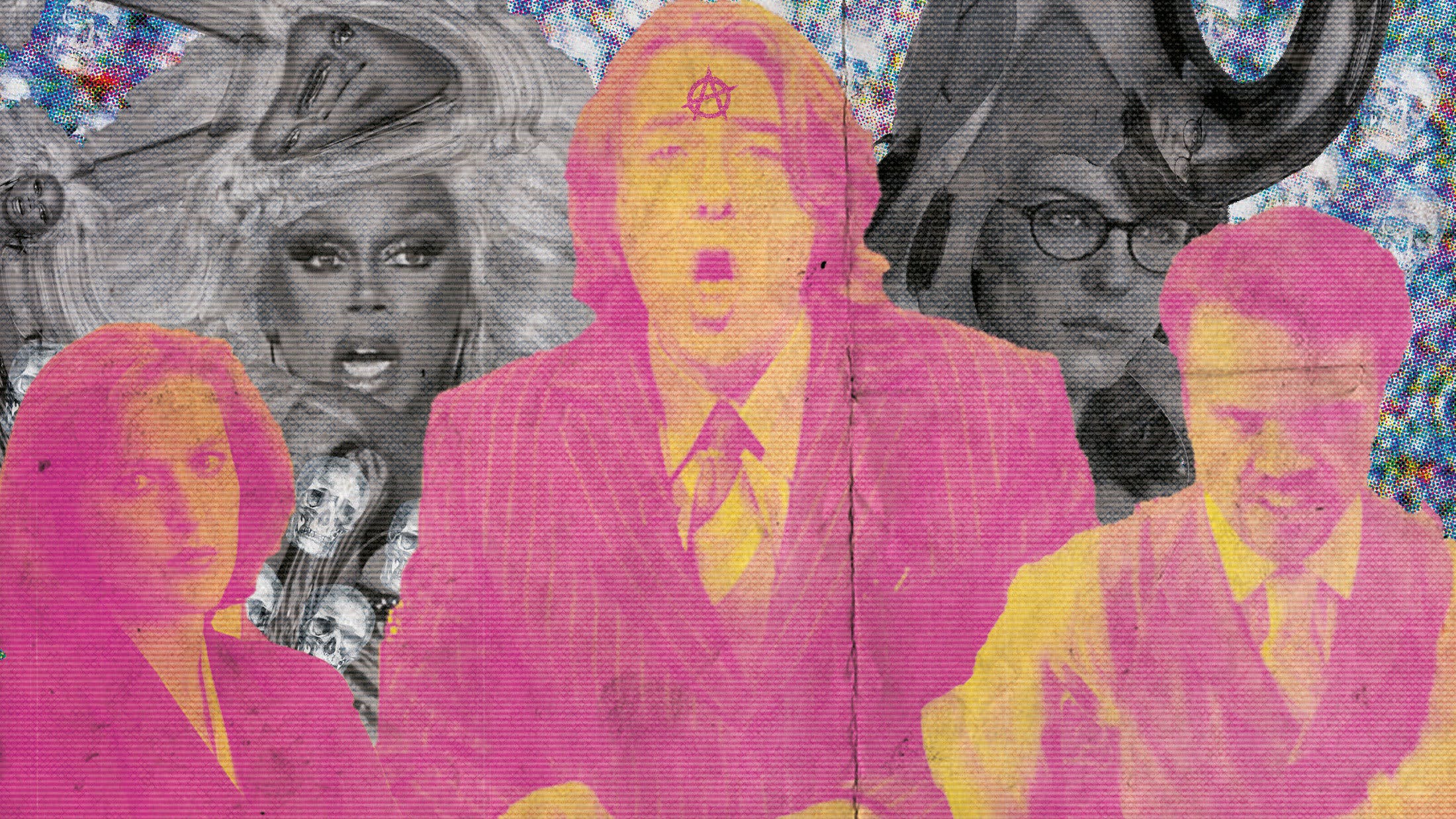 When prime minister Boris Johnson claimed to have been a fan of The Clash, those of you whose hearing isn't too badly damaged from gigs might have heard a strange rumbling noise from under the ground. That was the sound of Joe Strummer turning in his grave. But while punk fashion may be all the rage – with a host of idiots wearing band tees without a clue who the artists actually are – thankfully there are many more celebrities who have a genuine fondness for punk rock, some of them even playing in their own bands. As unlikely as it may seem, the following people are all punks at heart...

Actress and supermodel Elizabeth Hurley made international headlines when she attended the LA premiere of Four Weddings And A Funeral wearing a Versace dress held together with gold safety pins. This was not the first time Hurley had dabbled with punk fashion, however, having been a punk in her teen years.

“I had pink hair, a nose ring, and ripped up clothes,” she said. “I wasn't really rebelling against anything though, it was just fashion (but) I really loved the music and still often have The Clash blasting.” Also a big fan of Crass she spent many nights at Waterloo station after gigs having missed the last train home to Basingstoke. She now lives in a six million pound estate in Herefordshire and probably doesn't have to worry about train timetables.

“Long before I became ‘Supermodel Of The World,’ I was in a punk-rock band called Wee Wee Pole. I was inspired by bands like The B-52s, Wendy O. Williams (of Plasmatics), and my all-time favourite Blondie.”

In a later interview RuPaul stated that “Drag has always been a punk rock statement for me. It's a F-U to the status quo.”

Either way, Wee Wee Pole is a brilliant name!

A regular face on British TV since the late '80s, including hosting his own chat shows and featuring such guests as Iggy Pop and Johnny Rotten, Ross also made the punk documentary 1-2 FU for the BBC in 2004, which begins with an old lady telling viewers to 'fuck off'. Stating that punk rock remains “distressingly important”, he takes a bus tour of London's punk clubs and interviews most of the key players. Unfortunately, he also embarrasses himself by spiking his hair and donning a bondage jacket before performing with comedian Vic Reeves as The Fat Punks, but can perhaps be forgiven since he celebrated receiving an OBE by playing the Sex Pistols' God Save The Queen on BBC Radio 2.

You've probably heard of Ben Stiller. He's been in a movie or two; not least Zoolander, Meet The Fockers, Along Came Polly, There's Something About Mary, and, well... let's just say you've heard of him. You probably haven't heard of his teen punk band Capital Punishment, though – a bizarre industrial noise/post-punk outfit in which Stiller played drums. Despite playing just one gig, the New York four-piece managed to record an album entitled Roadkill, which was re-released in 2018 on the back of Stiller's fame, and then put out an EP, This Is Capital Punishment, featuring their first new music in 30 years. Inspired by the likes of Throbbing Gristle, it is far from easy listening.

Best known for presenting CBBC's nature series The Really Wild Show, and more recently for the BBC nature series Springwatch, naturalist Chris Packham has made no secret of his love for punk rock. Indeed, he has recently made a documentary for BBC 4 entitled Forever Punk, in which he visits many of the punk musicians who inspired his teen years, suggesting that when he received his CBE at Buckingham Palace that he may have become “the bastard that he hated.” Among his top 10 gigs are shows the by The Clash, Sham 69, the Buzzcocks, and Crass. He credits punk for his 'never take no for an answer' attitude. Kerrang! also spotted him at an IDLES gig last year.

Long before he got a nasty scar across his face as the character Tyrion Lannister in the epic Game Of Thrones, Peter Dinklage got another scar over his right eye from crowd-surfing when his band Whizzy – for whom he was frontman – played the legendary CBGB in New York.

“I think my friend kicked me in the head,” he told The New Yorker. “It was okay. The show went on. I was bleeding all over the place, but it’s rock'n'roll. You see pictures of those guys back in the day – Sid Vicious or whatever. It’s punk rock, man.”

Without the late Blues Brother John Belushi, one of the greatest moments of TV history (or at least punk TV history) would never have happened. Such was Belushi's love for punk legends Fear that aside from paying for studio time for the band and recording a single with them, he also got them a spot on the Halloween episode of Saturday Night Live in 1981. The result was complete chaos as an audience that included members of Cro-Mags, Minor Threat and Negative Approach went completely nuts, allegedly causing $20,000 worth of damage to the set. Fear frontman Lee Ving denies this: “We caused $500,000 worth of damage,” he insisted, “because we're professionals.”

Between 1987 and 2003 Loyd Grossman made a name for himself on Through The Keyhole by poking around the homes of the rich and famous, offering the catchphrase: “who on Earth would live in a house like this?” in a distinctly posh voice. Aside from co-hosting Masterchef with Sir David Frost, he has a host of fancy titles to his name, including Chairman of The Royal Parks, Chairman of Gresham College, and Governor of the British Institute at Florence, etc. Surprisingly then, Grossman also had a minor hit with the punk band Jet Bronx And The Forbidden, reaching number 49 in the charts in 1977, and, even more surprisingly, formed a new band, The New Forbidden, in 2008, and played Vienna Rebellion Punk Festival. Who on Earth would listen to a band like this?

Could this be a case for Mulder and Scully? Apparently so, because it seems that actress Gillian Anderson has a secret punk rock past. Voted 'most bizarre' and 'most likely to get arrested' at high school, the X-Files star, a fan of Dead Kennedys and Skinny Puppy, admitted to dabbling in drugs, sneaking out of home to see gigs, dying her hair, and generally being “a pain in the butt.” And, yes, she was arrested, for breaking and entering while attempting to glue the school doors. “We were in a small Republican town. There were only six punks there,” she told the Guardian. “We were weird.”

Comedy writer, journalist, Radio DJ, and TV personality, Danny Baker famously attempted to put punk rock into Room 101 on the programme of the same name, claiming that it was made by people with no idea what they were doing, making virtually unlistenable music. That said, he still wears safety pins on his belt and retains an “enormous affection” for the genre, not least since he was a writer for the first UK punk fanzine Sniffin' Glue. In an early TV interview about the fanzine he stated, “as long as I can kick them people in the arse, I'm gonna fucking 'ave it.” He later starred in commercials for laundry detergent.

Given that the hit comedy Portlandia featured cameo appearances from the likes of Jello Biafra, Henry Rollins, Glenn Danzig, and Sex Pistol Steve Jones, it's not really surprising that the show's co-creator and co-star Fred Armisen is into punk rock. What perhaps isn't common knowledge is that Armisen played drums for the punk band Trenchmouth in the late '80s, releasing no less than five studio albums. And they're pretty good, too! Kinda Fugazi-ish. His co-star Carrie Brownstien, meanwhile, is a member of the riot grrrl band Sleater-Kinney who are currently on tour with their new album The Center Won't Hold.

With roles in everything from American Psycho to Charlie's Angels and Inland Empire, it's fair to say that American actor Justin Theroux has enjoyed a rich and varied career. He also enjoys a rich and varied T-shirt collection, frequently snapped by paparazzi while wearing shirts from the Vandals, Crass, Siouxsie And The Banshees, Minor Threat and more. Granted, numerous celebrities have jumped on the punk bandwagon with the likes of Kim Kardashian wearing studded jacket bearing a rip-off of the Discharge logo, but it's unlikely that she also has a Black Flag tattoo and a straight-edge X on her ankle, both of which suggest that Theroux knows his stuff when it comes to punk.

Nicknamed 'Psycho' for his uncompromising style of play, British football manager and player Stuart Pearce has an equally uncompromising approach when it comes to music. Aside from seeing his favourite band, The Stranglers, over 300 times and once smashing up their dressing room (with the band's permission), he introduced the Sex Pistols at their Finsbury Park reunion show in 1996, and can also be seen going nuts in the pit on the cover of the Lurkers God's Lonely Men album. His three favourite songs, incidentally, are Anarchy In The UK by the Sex Pistols, White Riot by the Clash, and No More Heroes by The Stranglers.