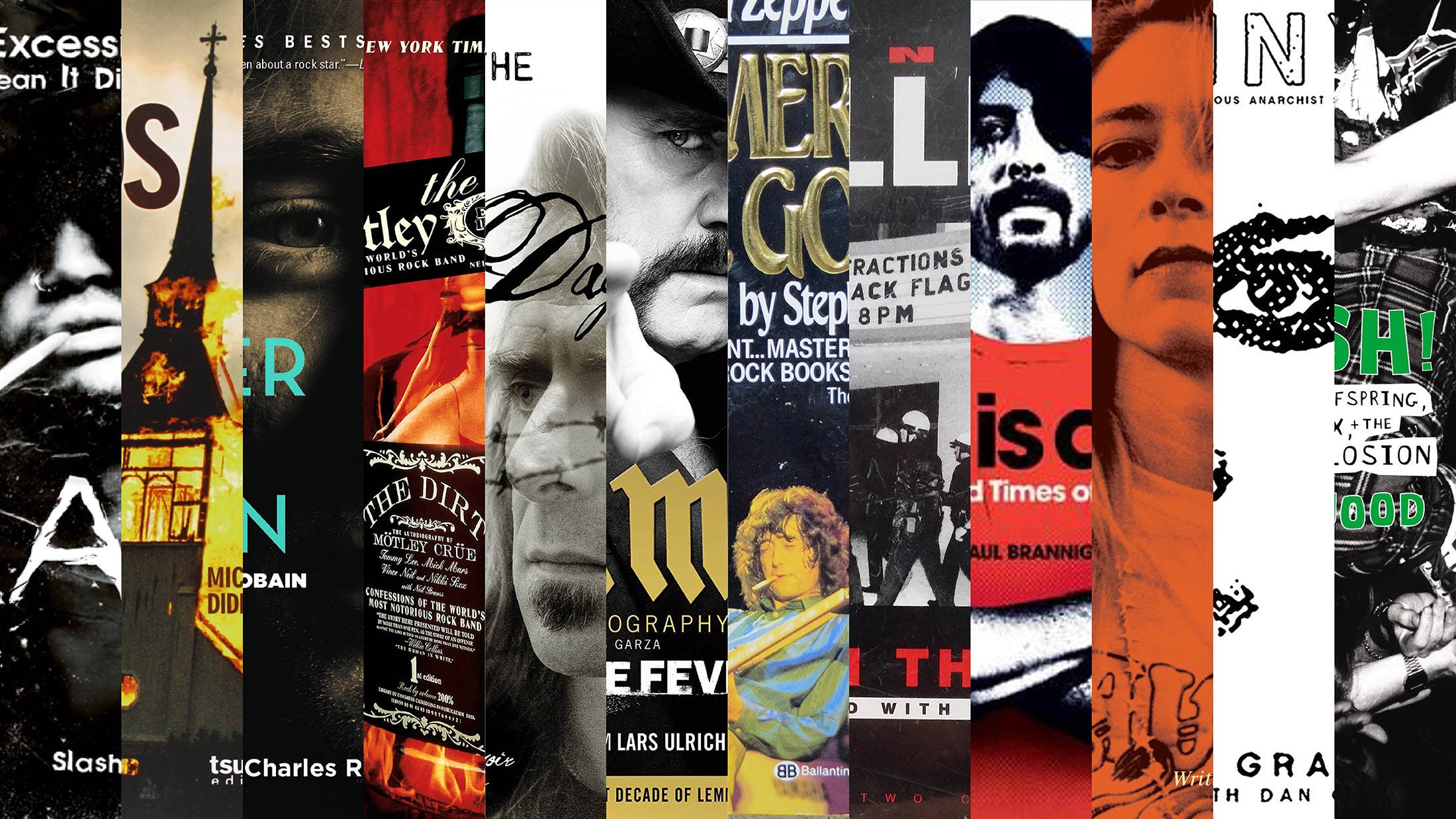 Chock full of colourful characters, constantly adrift on a sea of international adventure and not shy of a plot-twist or 25, the rock world feels predestined to generate some of the most horrifying, inspiring and downright incredible stories imaginable. We’ve stopped short of naming the 'top 13' rock biographies – simply because there are literally hundreds out there more than worth your time. Instead we have listed thirteen of the best rock music books you should read right now.

The Dirt: Confessions Of The World’s Most Notorious Rock Band (Mötley Crüe with Neil Strauss, 2001)

The classic. A title that’s become synonymous with the bad-boy rock biography, The Dirt feels like the ultimate chronicle of the genre’s ’80s excess. Looking back now, the idea that Mötley Crüe classics like Wild Side and Girls, Girls, Girls only scratched the surface of their unshackled debauchery seems almost unbelievable. A kaleidoscopic odyssey of booze, drugs, groupies, dealers, cops, tour buses, strip-clubs and car-wrecks, both figurative and literal, it’s a tale that needs to be read to be believed. If you only pick up one rock bio today, probably best to make it this one. Devotees should be sure to grab Nikki Sixx’s bleaker but equally essential 2007 follow-up, The Heroin Diaries, too.

Known, during writing, as Killing Me Loudly, the autobiography from Against Me!’s Laura Jane Grace draws extensively from the journals she had been compiling since third grade. Its eventual title ‘Tranny’ is a term the singer hates, but its appropriation here is symbolic of her taking ownership of a personal struggle through which she noted the supposedly accepting punk community were “more closed-minded than the church”. Illuminating. Poignant. Inspiring. It’s equally essential reading for individuals struggling to come to terms with themselves and those same closed-minds struggling to understand.

Possessed of a godlike air like few others, Lemmy always seemed like something of an unapproachable icon even for those of us fortunate to make his acquaintance. As such, this exceptionally grounded autobiography – charting the life of Ian Fraser Kilmister, son of an RAF chaplain from Stoke-On-Trent – brought us brilliantly closer to the man behind the myth. Of course, from his early musical exploits with Jimi Hendrix and Hawkwind to decades-long scene leadership at the helm of Motörhead, the man led a life that most of us could even imagine. “It’s a fallacy to say I taught him how to drink,” the legend writes at one point, remembering a young Lars Ulrich. “I actually taught him to throw up, and that’s what he did, all over himself. That’s what he got for trying to keep up with older people’s habits…”

Sonic Youth were never a band to shy away from unpleasantries in their dogged pursuit of beauty and authenticity. Fittingly, bassist Kim Gordon’s chronicle of her break-up with guitarist Thurston Moore and the dissolution of their seminal indie-rock outfit isn’t just a tale of heartbreak; it’s one of the sporadic mundanity, unpredictability and seat-of-your-pants adventure of holding a prime seat on the alt.rock roundabout for the best part of three decades. Girl In A Band proves itself essential reading for anyone with even a passing interest in the New York noiseniks – or the scene they helped define.

Another of the classics. It’s probably not that difficult to write a rollicking recount of one band’s tumultuous journey when that band is Led bloody Zeppelin. From quaaludes to bathtubs full of baked beans to the extremely questionable use of one taxidermied shark, many of the anecdotes here have slipped into rock’n’roll folklore, but that takes little from the experience of finding them compiled into this singular volume. It's best not to spoil them too much further here. Let’s just say this is another must-read addition, for rockers or anyone else with a heartbeat…

This Is A Call: The Life And Times Of Dave Grohl (Paul Brannigan, 2011)

It can be difficult, at times, to get a real sense of what goes on under the surface with The Nicest Man In Rock™. K!’s own Paul Brannigan charts his fascinating story with a dextrous grip on the evolving scenes through which Dave Grohl has endured and a spectacular sense of the adventure he’s experienced along the way. From the kid from the D.C. suburbs who dropped out of school to go on tour with Scream, to the sticksman catapulted to superstardom with Nirvana, to the iconic Foo Fighters frontman called upon to play for the Obamas on the White House lawn, few lives share the rollercoaster momentum of Dave’s.

Most rock bios are about the gritty build and the glitzy payoff. Safe to say, the Slash bio is virtually all payoff. Born Saul Hudson in England in 1965 to a white British graphic artist father and a black American costume designer mother, Slash’s story was never going to be that of your garden variety guitarist. Growing up in Los Angeles’ ’70s bohemia, his mum dated David Bowie, hung out with Joni Mitchell and taught the youngster that “being a rock star is [about finding] the intersection between who you are and who you want to be”. As the story of Guns N’ Roses’ meteoric rise and incendiary fall-out (their latter-day reconciliation is not part of this 2007 volume) unfold, they seem like simply the logical narrative developments of one of music’s most dramatic life stories.

Before you see the movie, read the book. As feels inevitable for any volume skewering the adolescent, corpse-painted pomposity of the ’90s Norwegian black metal scene – and laying bare the narcissistic inhumanity of the suicide, church burnings and murders that followed in its wake – the accuracy of Michael Moynihan’s Lords Of Chaos has been called into question by many of those involved at the time. Regardless, this is a fascinating trip into metal’s most evil sub-genre, and a chilling reminder of what can happen when the lines blur between trve cvlt theatre and stark reality. Special mention to Dayal Patterson’s Evolution Of The Cult (2013) and The Cult Never Dies (2015) for further deconstructing the scene’s horrifically compelling progression, too.

Much (perhaps too much) has been written about the life and death of Kurt Cobain. This first (arguably definitive) long-form retelling of his life story does spectacularly well to disperse the rumour that hangs around an individual who was, at his core, a musically prodigious slacker from the lower-middle-class of North Seattle. Even better, it charts Nirvana’s explosion of incredible cross-cultural success – one that, we should remember, lasted a fleeting three years – with a remarkable blend of cool analysis and awe. It’s in a chilling final forensic analysis of Kurt’s self-destructive streak, though, that Heavier Than Heaven comes into its own: daring the reader to put aside music and mythos to pass judgement on the individual in the harsh light of the bare facts.

It’s strange how the story of ’90s skate-punk has been distorted through the retrospective lens of the last two-and-a-bit decades: its lineage conflated and confused with that of the pop-punk genre it helped inspire. Veteran K! contributor Ian Winwood’s book shatters those perceptions, transporting us back to the poverty, addiction and unhinged chaos of the era that spawned so many of our favourite bands. Finding The Offspring guitarist Noodles working as a janitor, Rancid frontman Tim Armstrong living in a Salvation army shelter and Green Day maestro Billie Joe Armstrong infested with body lice during a debut European tour, it’s a fascinating look at the underground grit and shit before the platinum-rated sheen that followed.

Something of a gritty yin to The Dirt’s glamorous yang, Get In The Van is a superb, zero-bullshit diary of life on the road with LA hardcore legends Black Flag. Fronting the band between 1981 and 1986, punk’s storyteller supreme Henry Rollins had a drivers-seat view of the violence, squalor and sheer chaos of hardcore’s early days. From roadies forced into eating dog food to hard-nut cops to borderline psychotic fans, it’s a dirt-beneath-the-fingernails classic unafraid to show the bleak underbelly of life in a touring band – albeit one with an ultimately triumphant arc. Any fledgling rock star wannabes out for fame and fortune should really stop to read this first…

On May 4,2010, in the Abaton club in Prague, during a concert by Virginian metal legends Lamb Of God, 19-year-old fan Daniel Nosek sustained injuries to his head. Over the weeks that followed, he would slip into a coma and pass away. Although, following his initial release on bail, legal counsel advised against returning to the Czech Republic to face trial, frontman Randy Blythe insisted he "could not run away from this problem while the grieving family of a dead young man searched hopelessly for answers that he might help provide". Those events provide the tragic backdrop for the singer’s stunningly frank account of the dark days (and months) that followed his indictment on manslaughter charges and incarceration in a Czech prison. Even years since Randy’s release, it’s a story that delivers gut-churning jailhouse anecdotes, tales of galvanising camaraderie and an ultimate redemption that even the most optimistic dramatist might’ve struggled to conjure up.

It’d be unreasonable to compile a list of great rock biographies without including at least one on the biggest metal band in the world. Tracking a path from the thrash kings’ spandex-clad genesis to their coronation as globe-straddling, genre-transcending megastars, this packs in all the drugs, booze and drama any self-respecting fan would expect. From early acrimony with Dave Mustaine through the devastating loss of Cliff Burton to the callous early treatment and furious departure of Jason Newstead, all the personal drama is captured. As are the band’s mid-’90s creative swerves, the (ever-more hilariously redundant) Napster fiasco and the cringing in-studio therapy that formed the basis of seminal rock-doc Some Kind Of Monster. Crucially, though, Enter Night perfectly charts the band’s place in the rock and metal scene forever evolving around them.