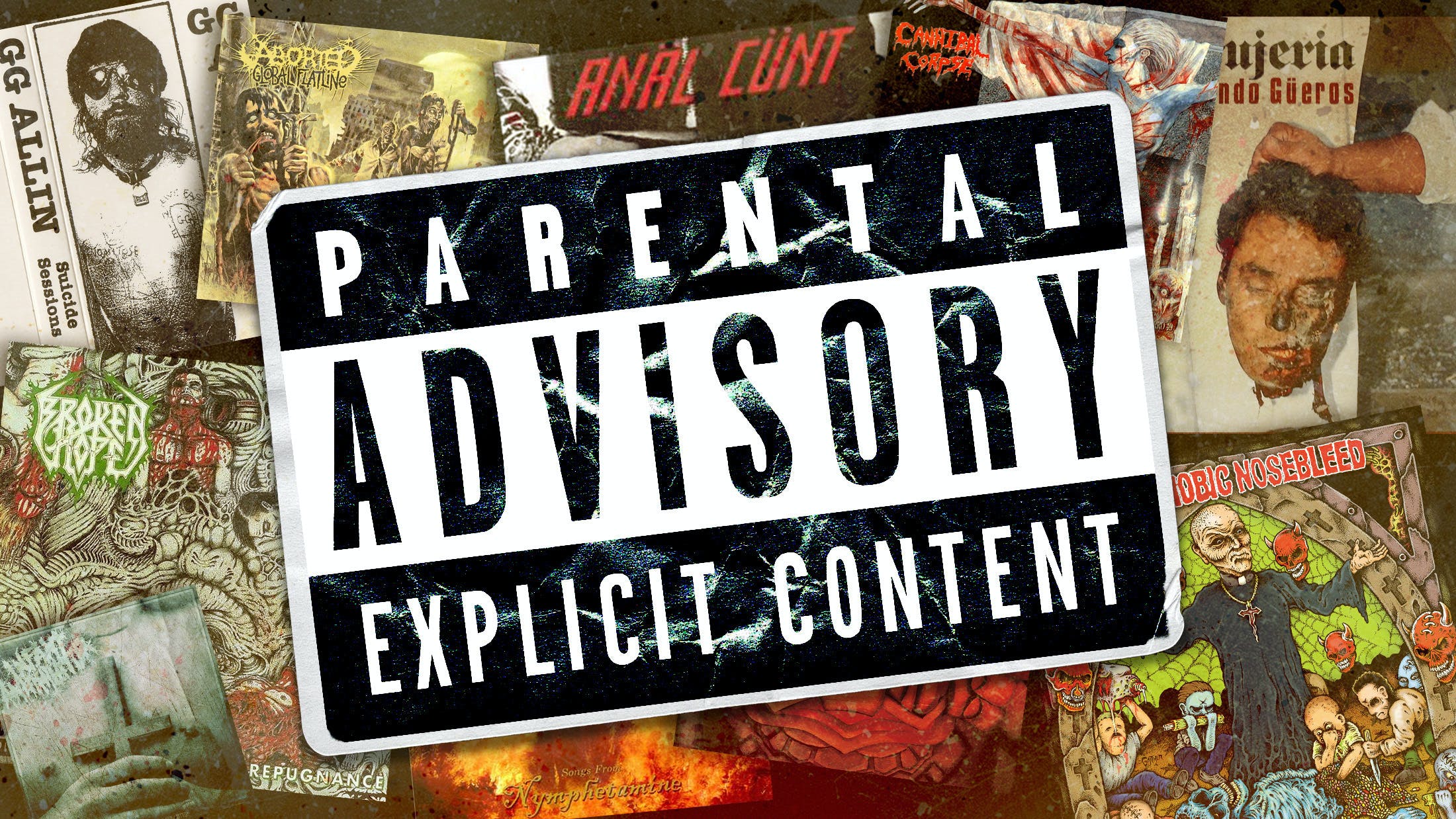 There’s a great bit in This Is Spinal Tap when Nigel Tufnel (Christopher Guest) is playing a beautiful song on a piano, explaining how he is taking influences from Bach and Mozart and using simple intertwining lines of melody to tug at people’s heartstrings. Asked what the piece is called, he says Lick My Love Pump.

Titling a song brings responsibility with it – whether in a record store, reading a review or browsing through Spotify, a potential listener will frequently see the track-listing long before hearing a record, and loads of effing and jeffing is as likely to drive some people away as it is to draw others in.

Here is a baker’s dozen of bands that really went for it in terms of NSFW, parent-unfriendly, showy-offy, wash-your-mouth-out-with-soap-and-water impoliteness.

Nailed Through Her C**t, Aborted

Brutal Belgian death metal band Aborted chose their name in the hope they’d be one of the first bands in record shops’ alphabetical displays. They’ve had a bit of a revolving door system going on with musicians over the years, with 34 one-time members. Huge fans of this particular song can choose from two albums to find it on – it features on both 2001’s Engineering The Dead and as a bonus track on 2012’s Global Flatline.

READ THIS: NOFX's Fat Mike on the disgusting, immortal legacy of GG Allin

Nutz In The Ass, Dick in The P***y Rectal Anarchy, Agoraphobic Nosebleed

Here are the lyrics to the first verse of Felching Vampires by Broken Hope, from 1993’s The Bowels Of Repugnance: 'Serrated penis cuts through the anus / Sandpaper tongue tickles intestines / Cravings for blood, fetish for feces / Canines inserted, gurgling semen.' The thing is, it sort of just sounds like 'Grr grr grrrr'.

Proof obscenity is by no means limited to the English language, the debut album by Mexican/international band Brujeria (which, fun fact, features backing vocals by Ruiz from Orange Is The New Black) includes this track, the title of which translates from Spanish as 'Fuckload of C**'.

Death metal legends (and co-stars of Ace Ventura: Pet Detective) Cannibal Corpse have had albums banned in Australia and tours cancelled in Russia, and until recently were only allowed to play half of their back catalogue in Germany. Lead singer George 'Corpsegrinder' Fisher has argued that the macabre imagery that is their stock in trade is less violent than that found in the Vatican.

Johnny Ramone Was In A Fucken Good Band But He Was A C**t (Gabba Gabba You Suck), Frenzal Rhomb

Australian punk legends Frenzal Rhomb enjoy a bit of swearing, as evidenced by the song (Get Fucked You Fucking Fuckwit) You Can’t Move Into My House. Their 2017 album High-Vis High Tea features one song, C**t Act, that is, in guitarist Lindsay Macdougall’s words, “a brilliant marketing move – with 18 instances of the word ‘c**t’ throughout the song, barely any radio station will touch it. Or is that because it’s not that good?”

The best-known version of this is the 30-second one heard on the Short Music For Short People compilation album, but GWAR also did a full-length version on their album We Kill Everything. In this, the first verse was repeated, but the river carp in the line 'I’m going to take a river carp and shove it up your butt' was replaced with a moa-moa, one of the largest fish in the ocean.

The willfully over-the-top deathcore trio Infant Annihilator (who can count sleepy rap superstar Post Malone among their fans) made it onto several Billboard charts with an album that contains tracks called Soil The Stillborn and Neonatalimpalionecrophiliation. Their most evocative non-sweary song name: Childchewer.

Fucking My Heart In The Ass, Steel Panther

READ THIS: Inside the world of extreme metal logos

There’s no actual swearing in the lyrics of this song from the System Of A Down co-frontman’s first solo album Elect The Dead, but it sports a title deliberately chosen to mix the highbrow and profane. There is also a live version available on the album Elect The Dead Symphony featuring the Auckland Philharmonia Orchestra. It’s good!