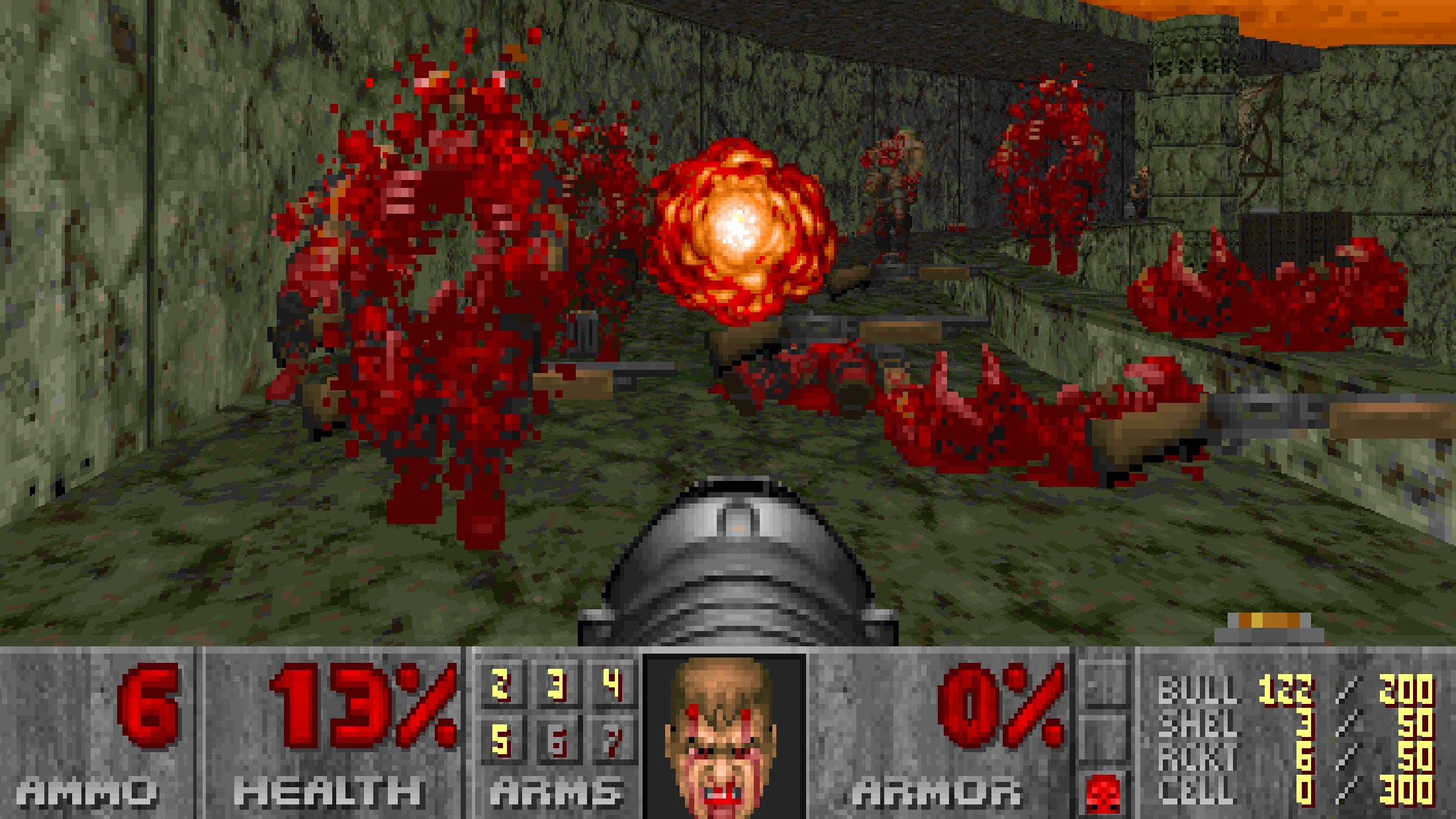 The relationship between heavy metal and video games has smouldered away for as long as square-eyed pixel-fiends have been button-bashing in darkened rooms. Tapping into fans’ escapist tendencies by endowing the ability to slay dragons, disembowel demons, rock festival stages and, er, kick-ass at pinball, those pixellated dream-vehicles open that same vein of adrenalized, out-there excitement that the best metal songs do.

When they cross over, the results can be spectacular, shambolic or something simmering in between. Rifling through several decades’ of floppy discs, cartridges, CD-ROMS, DVDs (and digital downloads) we thought it was high time we scrolled down memory lane to rank the most memorable times video games dipped their toes into murky heavy metal waters. So many hours spent rocking out in the digital realm…

Plenty of games wear their metal influence on their sleeves, but few allowed you to get into the onstage experience like Rock Band. Of course, the debt owed to its recent forbear Guitar Hero (more on that later) cannot be overstated, but the day-one selection of instrument-controllers and sheer level of playable content on show in this original iteration mean that it cannot be overlooked. From Coheed And Cambria’s Welcome Home, Iron Maiden’s Run To The Hills and Metallica’s Enter Sandman to Soundgarden’s Black Hole Sun, KISS’ Detroit Rock City and Black Sabbath’s Paranoid this was a hell of a mix-tape even without the game attached.

It’s no secret that Gene Simmons will sell anything. It was no surprise, therefore, when the face-painted legends flogged their likenesses to sit front and centre of this mediocre first-person shooter adapted from Todd MacFarlane’s Psycho Circus comic books. Focused around a Kiss tribute band who’re imbued with the originals’ apparent elemental powers (presumably after payment of substantial licensing fees) so that they can fight the legions of enemies controlled by the titular Nightmare Child, it’s utter, utter nonsense, but that didn’t prevent the Kiss Army making it into a relative hit.

There’s no official connection between this bonkers 1989 platformer and Ronnie James Dio (or any other members of the metal fraternity) but it’s not afraid of wearing its headbanging influences on its sleeve. Released only in Japan, Ronnie – whose likeness and ideas are outrageously exploited – as well as the also-referenced Slayer, King Crimson and Ozzy Osbourne (accompanied by Randy and Zakk, natch) presumably never came across the fringe NES release. Even now, though, a play-through chucks up a mixed bag of knock-off cringe (even the gameplay owes everything to Castlevania) and fuzzy fan-service.

Iron Maiden’s Ed Hunter mightn’t be a ‘full’ game in the traditional sense (it was released as a bonus CD-ROM bundled with the eponymous greatest-hits collection), but it does chalk up bonus points for arriving at such a pivotal point in the British metal giants’ career. Capitalising on the Maiden revival that came with the return of vocalist Bruce Dickinson and guitarist Adrian Smith (both of whom were back onstage for the accompanying tour), it saw players take control of Maiden mascot Eddie for a trawl around a series of levels based on past album covers like The Shady Pines Asylum (Piece Of Mind), The Pits Of Hell (Number Of The Beast) and The Pharaoh’s Tomb (Powerslave). A memorable bit of of-its-time fan service.

Like it or not, Beavis And Butthead spoke for a whole generation of metalheads. Ripping into everyone from Pantera to Faith No More, they were essential late-night viewing in the pre-broadband era. This SNES cash-in on the show’s Gen-X popularity actually did a remarkably decent job of bringing Mike Judge’s TV-based proto-trolls to life. Revolving around a story about the lads’ quest to recover lost tickets to a GWAR concert, there are nonsensical set-pieces and fart jokes by the bucketful. Held up against more recent adult animation adaptations, it’s hardly a South Park: The Fractured But Whole-style classic, but low-effort stupidity is presumably what our snorting protagonists would’ve wanted.

A remake of the 16-Bit 1988 arcade classic, the mere concept of Splatterhouse 2010 – Rick Taylor’s attempts at self-resurrection and retrieving his kidnapped girlfriend by donning the ‘Terror Mask’ to become a hulking, (other people’s) blood-fuelled monster capable of ripping apart an army of demonic foes – is the stuff of metal album cover daydreams. Welding on a soundtrack featuring the likes of Cavalera Conspiracy’s Must Kill, Five Finger Death Punch’s Dying Breed, Goatwhore’s Apocalyptic Havoc, The Haunted’s Hollow Ground and High On Fire’s Fire, Flood & Plague – not to mention cuts by Lamb Of God, Mastodon and Municipal Waste –metal credentials were guaranteed.

Basically a Mötley Crüe-branded rework of the computerised pinball template that amused/infuriated gamers for much of the nineties/noughties, there’s really not a lot to say about Crüe Ball. Reportedly starting life as ‘Twisted Flipper’ before the Crüe name was added to boost sales late in the day, this does boast a pretty mental aesthetic and stone-cold bangers Dr Feelgood, Live Wire and Home Sweet Home on the soundtrack, but it’s dated just about as terribly as one would expect.

Another entry where the metal influence bleeds through right from the base concept. Hell, the word ‘metal’ is even in the title. Loosely plotted around the concept of a gang of extrovert psychos (from crazed clown Sweet Tooth to uber-femme fatale Dollface) intent on utilising their arsenal of souped-up novelty vehicles (*evil ice-cream truck klaxon*) to commit vehicular manslaughter it continues a genre that started with the original Twisted Metal in 1995 and careered through the likes of Carmageddon and the Grand Theft Auto series. Its freshly-written OST and use of tracks from White Zombie, Sepultura, Avenged Sevenfold and Judas Priest is fittingly killer, too.

ID’s full-3D follow-up to their seminal 1993 first-person game-changer Doom, Quake was both spiritual successor and next evolution in its own right. Playing as a protagonist known only as Ranger and fighting against the titular dark force’s nightmarish hordes through a series of faux-medieval mazes, there was a ton of metal influence ground into the nihilistic concept and aesthetic from the moment we hit play. The developers didn’t stop there, either. Conscripting Trent Reznor’s Nine Inch Nails to compose the soundtrack, they took metal gaming to the next level. "[The soundtrack] is not music,” Reznor (who also contributed all the player-sounds) commented on his work, “it's textures and ambiences and whirling machine noises. We tried to make the most sinister, depressive, scary, frightening kind of thing..." That’s a fair summary.

The N64 was often mocked as a console for kids – overloaded with classic Nintendo characters and other brightly-coloured fare – but this classic offering delivered a one-way trip into darkness. A game that begins with Jack The Ripper being confronted by Legion to end his life so that he can build a Cathedral Of Pain in Deadside to conquer the living world – and only twists downward from there – this underrated adaptation of Jim Shooter’s eponymous comic series was metal as fuck. From voodoo to serial Killers to a talking, top-hat-wearing Irish snake named Jaunty, Shadow Man remains bloody great.

If the aforementioned 1993 original was basically heavy metal manifest in pixels, the 2016 update of ID’s Doom dragged that, dripping gore, into the modern era. The story of a research facility on Mars – investigating the energy potential of opening the gate to hell, obviously – which is (shockingly) overrun by demons, Doom 2016 sees players step back into the shoes of the Doom Slayer to thrilling effect. Mick Gordon updates the original soundtrack with serious industrial-metal verve: the ideal sonic accompaniment to competitively curb-stomping the spawn of Satan.

The breakthrough – and, arguably, the best – rock rhythm simulator series ran through a number of fascinating iterations before turning to the biggest band in metal. Following-on from the successful Guitar Hero: Aerosmith, GH: Metallica features motion-capture performances from the band, 28 of the Bay Area titans biggest tracks and a further 21 of their personal favourites from other bands including Machine Head’s Beautiful Mourning, Slayer’s War Ensemble and Thin Lizzy’s The Boys Are Back In Town. You’ll probably never actually experience Lars hopping off his stool to run directionless circles around you onstage, but this’ll get you one step closer to living the dream.

There was really only ever one choice for number one. A strange, strangely effective meld of genres mixing action-adventure and real time strategy, cult classic Brütal Legend tells the tale of Eddie Riggs: the world’s best roadie, working for the world’s worst metal band Kabbage Boy battling the evil emperor Doviculus (played by thespian legend Tim Curry) through the heavy metal realm. With Tenacious D’s Jack Black voicing Eddie and extended appearances from Lemmy Kilmister, Rob Halford, Ozzy Osbourne and The Runaways’ Lita Ford, alongside musical contributions from 75 acts ranging the full metal gamut (from Black Sabbath to Carcass, from Anthrax to Testament, from Manowar to Ministry) there has surely never been more metal crammed onto one disc than there was here...