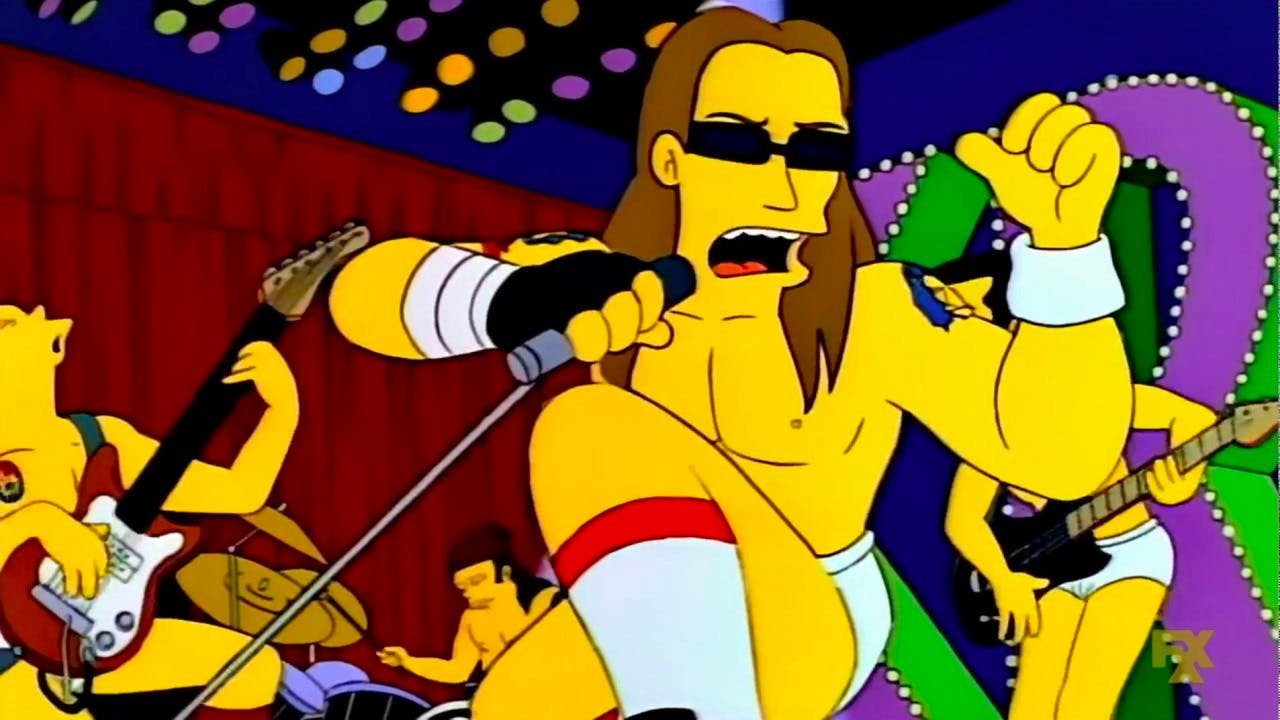 Music is a vital part of The Simpsons. From the Monorail song and See My Vest to Baby On Board and Who Needs A Kwik-E-Mart, everyone's favourite yellow family have spent the past three decades singing and dancing their way across Springfield. They've had countless cameos from rock and pop stars (although the less said about the Lady Gaga episode the better), but some of rock's biggest tunes have also featured in some of our favourite scenes. You can probably think of more examples than below – let's face it, there have been 688 episodes of The Simpsons at the time of writing – but these ones stand out in our memory. Relive some classic Simpsons moments below.

In the 300th episode of The Simpsons, Bart moves into his own apartment and ends up living beneath pro-skater Tony Hawk (naturally). But the Birdman isn’t alone in his halfpipe-filled home, blink-182 are jamming All The Small Things on a stage in the corner. They plan to ditch the party, but only after they get paid.

The 250th episode also features some big musical names, this time in the form of seminal hard rockers The Who. When a new area code is introduced, the town is thrown into disarray, so a giant wall is built to separate New and Old Springfield. The Who eventually demolish the barrier using the power of the RIFF from Won’t Get Fooled Again. The animation staff decided to include Keith Moon as the drummer in tribute.

It might just be for a few seconds, but Green Day’s American Idiot appears in The Simpsons Movie. Yes, you might remember them playing the Simpsons theme on a barge that eventually sinks into the polluted lake, killing the band, but at their funeral a special organ version of American Idiot rings out in the church. Moments later, Abe bursts in while screaming about impending doom to set up the rest of the film.

In 2014, Judas Priest appeared in The Simpsons to perform their iconic track Breaking The Law – reimagined to be all about obeying the rules. However, twice in the scene Priest are referred to as death metal, which we all know is incorrect. Following a fan backlash, to the next episode opens with Bart writing 'Judas Priest Are Not Death Metal' repeatedly on the blackboard.

We know Otto is a huge Metallica fan, but it turns out Hans Moleman is an even bigger lover of The Four Horsemen (and once slept with Lars Ulrich’s grandmother). When Metallica’s bus breaks down, Otto offers them a lift in the school bus – until Bart steals it, leaving him in the lurch with his heroes. They decide to ride off with Moleman while blasting Master Of Puppets from the back of his truck.

Technically this isn't performed by Poison, but Cyanide – a loving tribute to Poison – who need a ride a home. Their classic rock smash plays at Otto’s wedding as Becky prepares to walk down the aisle, before revealing that she hates heavy metal music. Whaaaaaaa?! Fun fact: Otto proposed to Becky as Poison’s power ballad Every Rose Has Its Thorn played from his boombox.

Not just the set up for one of The Simpsons’ most famous gags, Smashing Pumpkins are also one of the bands that play the Hullabalooza festival in 1996 (alongside Sonic Youth and Cypress Hill). As the alt.rock titans blast through Zero onstage in Springfield, Lisa remarks that the “bleak” music “is really getting to the crowd,” to which Bart responds with the ever-true “Making teenagers depressed is like shooting fish in a barrel.”

Another name on the Hullabalooza lineup is Peter Frampton, who doesn’t have the best time of it – with Cypress Hill stealing his symphonic orchestra and Sonic Youth eating his watermelon. It was actually one of Peter’s inflatable pigs malfunctioning that led to Homer being recruited by the festival’s freak show. The ‘70s rocker is shown throughout the episode, performing Do You Feel Like We Do with a talkbox, while Otto watches on chatting to his own shoes.

Back in 1992, in the episode The Otto Show, Bart and Milhouse attend their first ever concert – headlined by the mighty Spinal Tap. The legendary British metallers open their set in the ice arena with Break Like The Wind, the title track of their second album, but the gig is cut short after Nigel Tufnel is hit in the face with a laser.

10. Red Hot Chili Peppers – Give It Away

One of the myriad names to join The Krusty comeback special are the California-loving sock-wearers Red Hot Chili Peppers. Hired to play their 1991 hit Give It Away, Krusty requests they alter the lyrics from ‘What I've got you've got to get it put it in you,’ to ‘What I like is I’d like to hug and kiss you,’ in a pastiche of Ed Sullivan asking The Doors to change the words to Light My Fire.

Aerosmith were the first rock band to feature in The Simpsons, and they did so in style, appearing in one of the greatest episodes of all time. When Moe’s Tavern becomes the cultural hotspot of Springfield thanks to his Flaming Moe drink (stolen from Homer, of course), it attracts the arena rock legends, who play an impromptu Walk This Way in return for free pickled eggs. Their track Young Lust also plays over the end credits.

It sounds like rock and/or roll. In a signature Bart prank, he swaps the Sunday service hymn sheet with this late ‘60s psych-rock tune, under the guise of In The Garden Of Eden by I. Ron Butterfly. Of course, 17 minutes and one epic organ solo later, Reverend Lovejoy realises what’s going on as a beach ball bounces off his head.

In 2006, The White Stripes were one of the hottest bands on the planet, so it stands to reason that they’d make an appearance in Springfield. When Marge and Homer try to channel Bart’s reckless behaviour into learning drums, he suddenly finds himself in a makeshift video for Hardest Button To Button, which crashes into Jack and Meg White jamming down the street. The pair give chase in time with the music, but the song ends as they try to jump a bridge.

14. Cypress Hill – Insane In The Brain

As mentioned earlier, Cypress Hill steal the London Symphony Orchestra from Peter Frampton. This isn't intentional, they just can't remember not doing it, and assume they must’ve done it “possibly while high”. The hip-hop trio and LSO join forces to perform Insane In The Brain in the backstage area, to the delight of a visiting Marge. Years later, the two bands would set the Simpsons fandom ablaze by actively talking about a collaboration on Twitter.