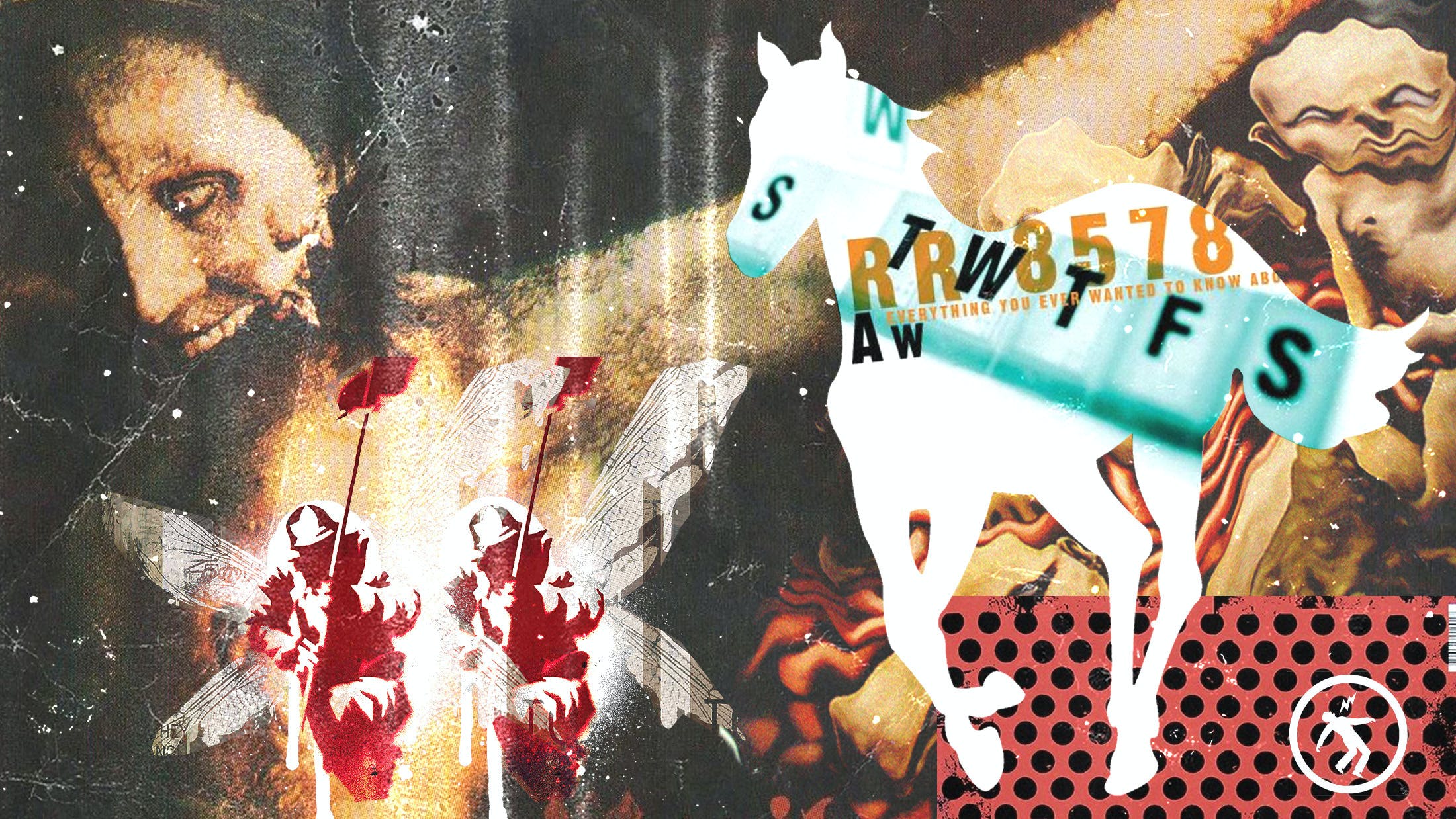 It feels like five minutes since we bellowed ‘Happy New Year’ and fell into a bin while celebrating the new millennium. Where does time go? What is time but a calibrated march towards the great unknown? What happened to our keys?

In hindsight, a fair bit happened that year, so, in time honoured tradition, we’ve condensed the most important talking points for your delight and delectation.

In the run up to the year 2000, there was panic about a ‘millennium bug’ – a programming glitch which was supposed to cause computers to malfunction on a worldwide scale. Planes didn’t fall from the sky and red-faced nerds everywhere breathed a sigh of relief.

In other tech news, the seemingly indestructible Nokia 3310 was released and introduced mobile phone users to the underwhelming graphics and addictive gameplay of Snake.

The Sims was released, too, where gamers could take a break from eating, doing laundry and arguing with people in real life to do those things virtually instead.

The Millennium Dome opened its doors on January 1, 2000 and despite being designed as a hub of culture, this fancy London tent proved to be a flop. It eventually turned into The O2 seven years later and has hosted classic performances ever since.

In celebrity marriage news, Brad Pitt and Jennifer Aniston tied the knot in Malibu that summer, and enjoyed a relatively short period of wedded bliss before divorcing five years later.

We’re certain other stuff happened, but this was a year where we were utterly consumed by a slew of albums. Pearl Jam released Binaural, Melvins concluded their trilogy of Ipecac albums with The Crybaby, while The Smashing Pumpkins released their conceptual collection, Machina/The Machines of God.

But we can't write about every album that was released in 2000. Here then, are 20 releases that are worthy of your attention.

Rage Against The Machine – Renegades

A month after recording a collection of robust, politically-charged cover versions of songs by the likes of MC5, Bob Dylan and Cypress Hill, Rage Against The Machine frontman Zack de la Rocha announced his departure from the band in October 2000, citing that their “decision-making process [had] completely failed”. Despite their intermittent reunions, it remains the last studio recordings the four-piece managed before imploding.

At the turn of the century, Rocket From The Crypt’s John ‘Speedo’ Reis joined forces with his former Drive Like Jehu bandmate Rick Froberg to form Hot Snakes. Enlisting the services of The Delta 72 drummer Jason Kourkounis and Tanner frontman Gar Wood on bass, the four served up a propulsive, no-frills debut abound with soul-stirring riffs.

Swedish gang The Hives' album may have only clocked in at 28 minutes, but it was a gut punch delivered with all the force of a heavyweight boxer. Equal parts garage rock and punk, the sharp-dressed quintet’s second album spawned the classic singles Hate to Say I Told You So and Main Offender.

After a couple of so-so albums with former Wolfsbane vocalist Blaze Bayley at the helm, singer Bruce Dickinson and guitarist Adrian Smith returned to the Iron Maiden fold for their 12th studio album. Opening with the thunderous lead single The Wicker Man, Brave New World would be their most thrilling album in years. “The first thing you notice is how big it all sounds,” we remarked in a 5K review. “[It’s] so gloriously in-yer-face you can almost feel its hot breath up your nostrils.”

Rollins Band – Get Some Go Again

After dismantling the line-up responsible for the albums Weight and Come In And Burn, Henry Rollins enlisted the services of Los Angeles’ trio Mother Superior for this heads down, hard rock effort. Scott Gorham makes a guest appearance on their stomping cover of Thin Lizzy’s Are You Ready?, while MC5’s Wayne Kramer joins the quartet on Hotter And Hotter and L.A. Money Train.

After witnessing a local show by this Buffalo hardcore quintet, Every Time I Die frontman Keith Buckley felt compelled to be in a band. Designs For Automotion – Snapcase's third full-length, recorded by DEP/ETID producer Steve Evetts – captures the energy of their legendary live performances. Occupying the space between Quicksand’s complex guitar interplay and Sick Of It All’s brute force, tracks like Target, Typecast Modulator and Energy Dome are thrilling examples of their aggressive oeuvre.

For Electric Wizard's follow-up to 1998’s Come, My Fanatics, frontman Jus Oborn had one simple plan when they entered the studio: take lots of drugs, plug in and make the “most disgusting, foul, putrid record that anyone has ever recorded”. For anyone who likes their metal misanthropic and doom-laden, Dopethrone is a compulsory purchase.

Frontman Billie Joe Armstrong listened to Bob Dylan's 1965 classic Bringing It All Back Home constantly while writing Green Day’s follow-up to 1997’s Nimrod. That album’s DNA is all over the band’s sixth full-length. Breezy singles like Minority and Warning are distant cousins of their earlier spit-flecked Bay Area punk, while Hold On and closer Macy’s Day Parade cement Billie Joe’s reputation for penning a simple but effective tune.

Limp Bizkit’s third album sold over 1 million copies during its first week of release and continued to dominate the U.S. Billboard charts with a slew of singles and hugely expensive promo videos: My Generation, My Way, Rollin' (Air Raid Vehicle), Take A Look Around and Boiler. Kerrang! awarded the album 3Ks, noting: “A wise man once said that all fashion is the triumph of style over content, however, it don’t come much more fashionable than this.”

Three years on from their debut Greatest Lovesongs Vol. 666, HIM – led by the human chimney Ville Valo – returned with a melancholic, goth-tinged collection for lovelorn romantics everywhere.

For what was to be Pantera's ninth and final full-length album, the Texan four-piece didn’t actually deconstruct heavy metal for the turn of the millennium. It was simply business as usual: weed, whiskey and riffs. According to the late Dimebag Darrell, there was no messing about when it came to recording …Steel in his home studio. “We cut the fat off of everything,” he told Guitar World. “There ain't one ounce of fat on this record. It's 10 solid ass-kickers.”

After the demise of their label A&M, Therapy? locked themselves away at Milton Keynes’ Great Linford Manor studio with PJ Harvey producer Head for six weeks and emerged with this dark and hellaciously vexed effort. Mary Anne Hobbs, who was the Radio 1 Rock Show presenter at the time, declared that the album “should be destroyed” on air. Not a fan, then.

At The Drive-In – Relationship Of Command

Arriving just over a year after the jaw-dropping Vaya EP, this El Paso quintet teamed up with producer Ross Robinson at the Indigo Ranch Studios in Malibu for their third full-length album. Over the course of 11 urgent, thrilling tracks, Relationship Of Command – released on Beastie Boys’ Grand Royal label – quickly became regarded as one of the most influential post-hardcore albums ever made. Six months later, however, At The Drive-In went on indefinite hiatus. Shortly after, Cedric Bixler-Zavala and Omar Rodríguez-López formed The Mars Volta, and Jim Ward, Paul Hinojos and Tony Hajjar regrouping as Sparta.

AFI – The Art Of Drowning

By the time AFI released their follow-up to Black Sails In The Sunset, the band were beginning to move away from their Misfits-inspired punk roots and embrace their gothic side. The Art Of Drowning – their last release on Offspring frontman Dexter Holland’s Nitro label – is notable for Ever And A Day and the radio single The Days Of The Phoenix. The four-piece would release their major label debut, Sing The Sorrow, three years later.

Glassjaw – Everything You Ever Wanted To Know About Silence

Like At The Drive-In before them, this young Long Island quintet found themselves at Indigo Ranch Studios in Malibu, spending two months recording their debut with Ross Robinson. Like a collision between Orange 9mm, Quicksand and Elvis Costello, tracks like When One Eight Becomes Two Zeros, Siberian Kiss and Pretty Lush remain sonic highlights. Glassjaw frontman Daryl Palumbo has, however, since apologised for the misogynistic lyrics found on the record, written after what appears to be a failed relationship. “It deserves scrutiny,” he admitted to The Guardian 17 years later. “I didn’t have to say it that way... It’s stupid, you don’t speak face-to-face to a woman like that. I was angry. It’s offensive.”

After the low-key release of their stunning self-titled debut, Queens Of The Stone Age’s second album – their first on a major – set the bar even higher; from the bludgeoning opener Feel Good Hit Of The Summer – a hedonist’s shopping list with guest vocals from Rob Halford – to the hypnotic I Think I Lost My Headache. We said: “In 10 years from now, you’ll still be playing this awesome album, and that’s what really counts.” And 20 years on, Rated R remains a compelling listen.

Although their second album Alive Or Just Breathing truly spawned a wave of imitators, Killswitch’s self-titled debut is the sound of a band still finding their feet. That said, their first album – which featured Adam Dutkiewicz on drums before switching to guitar for their 2004 album, The End Of Heartache – displayed some tantalising glimpses of what was to come from the Massachusetts metallers.

It’s amazing to think that Linkin Park played 42 unsuccessful record company showcases before signing with Warner Brothers in 1999. Their debut album, Hybrid Theory, combined crunching riffs and hip-hop textures, underpinning Chester Bennington and Mike Shinoda’s vocal interplay. To date, the album has sold upwards of 32 million copies. And, on a quiet night in California, you can hear the sound of 42 label executives kicking themselves repeatedly.

Following the 1999 Columbine high school shootings which claimed the lives of 13 people, Marilyn Manson was made into a scapegoat by the America media. His crime? Simply releasing music which had found its way into Eric Harris and Dylan Klebold’s record collections. Holy Wood was his acerbic response. “As far as my state of mind after Columbine goes – and other random acts of nature that took place last year that I got blamed for – I had to make a decision whether I was going to stay behind and get fucked in the ass, or if I was going to kick someone's teeth in,” Manson told Kerrang! before the album’s release. “This record kicks people's teeth in.” This masterpiece’s fury has not dulled in the subsequent years.