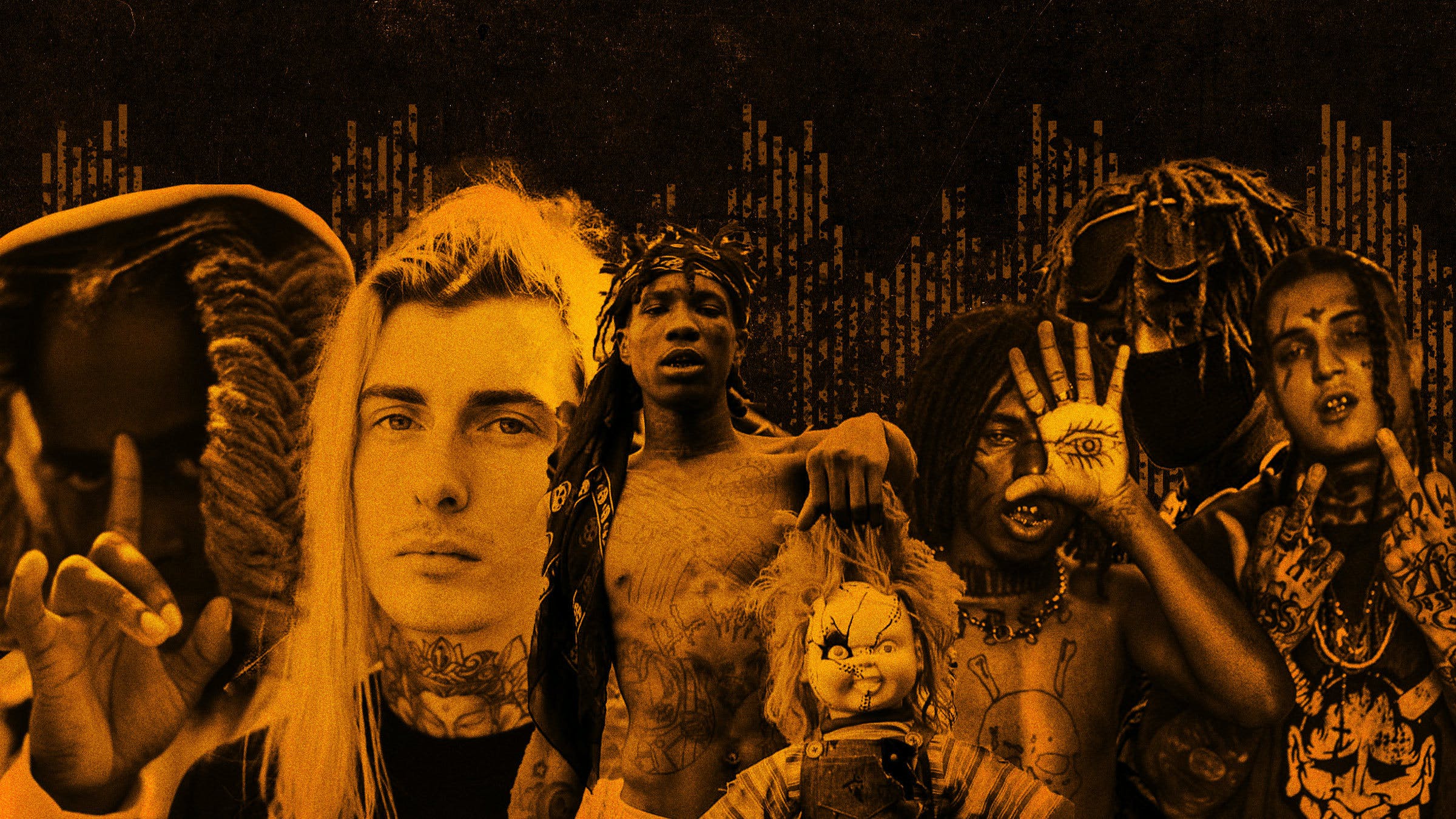 Try as one might, there’s no way of keeping heavy metal away from hip-hop. Over the course of their respective histories, the two genres have not merely coexisted but rather often coalesced, albeit with admittedly mixed results. For every iconic moment like Anthrax and Public Enemy coming together for the thrash rap hybrid Bring The Noise, there are dozens of crossover disasters, retrospectively dated mishaps, and juggalo nonsense. Though the possibility for greatness exists (as evidenced by Rage Against The Machine), "rap metal" as an idiom has overall been a dicey pursuit.

Nonetheless, every generation deserves its opportunity to improve on what came before. In the diverse and misunderstood world of SoundCloud rap, metal plays a part. For example, you may have caught a glimpse of Smokepurpp in a Metallica t-shirt or a pic of face-tatted favorite Lil Uzi Vert sporting a Marilyn Manson one derived from the shock rock icon’s August 1997 Rolling Stone cover photo in Migos’ video for Bad and Boujee.

Beyond fashion statements -- which, while superficial, still likely reflect these artists’ musical tastes -- a subset of young rappers have applied a heavy metal aesthetic to their songs, shouting and snarling over beats teeming with grimness and speaker-rattling bass. With roots ranging from metalcore to Spaceghostpurrp, their approach differs from that of their predecessors, cultivating a subgenre within the SoundCloud scene that connects with the angsty and disaffected in a big way. The rising popularity of these acts has caught the attention of the major label A&Rs too, with a number of them making deals and dropping projects.

With that in mind, here are five SoundCloud rappers that metalheads should check out:

Based solely the looks of his disturbingly creative and hair-woven horns in his promo photos, this Buffalo, NY native immediately stands out from the herd of seemingly redundant rappers in this particular niche. But beyond image, Bill $aber’s sound distinctly puts him ahead of a lot of his peers. Making a name for himself off the eerie single Creepin N Lurkin, which conveniently appears on his 2017 compilation Before Y.O.T.R., he mutters and hollers over icy and sinister instrumentals. On last year’s bluntly titled Kill Everything, he warns enemies of their folly in messing with him via Come With The Force and brags about the hedonistic highs and distrustful lows inherent in his lifestyle on Paranoia. A prolific practitioner, he’s already dropped multiple new tracks in just the first few weeks of 2019.

Made up of New York based rappers SosMula and ZillaKami, and often backed with beats by like-minded producer Thraxx, this group inked a reportedly seven-figure deal with Republic Records last year as part of the SoundCloud signing frenzy. Given ZillaKami’s prior connections to and purported ghostwriting for 2018’s problematic hitmaker 6x9ine, snagging City Morgue no doubt felt like a smart move. While there are some sonic similarities between the duo and the Gummo guy, their mixtape debut Vol. 1: Hell Or High Water takes things to a darker and far more thrilling extreme. They draw influence from edgy Larry Clark films and Atlanta trap in equal measure on Ken Park while screaming video game references and death threats on Nuka Cola. After opening for Denzel Curry on his recent U.S. tour, they sold out a headlining gig of their own at respected Brooklyn metal club Saint Vitus, another indication of their neo-kvlt cred.

Hardcore and metal fans may already be fairly familiar with this up-and-coming artist, given that he spent the latter half of 2018 touring with the likes of Code Orange and Vein. Straight out of Florida, home to far too many SoundCloud rappers to name, Ghostemane reps Bathory and Darkthrone, jams out with Travis Barker, and sounds kinda like Nine Inch Nails. Proudly utilizing black-metal style logos across his various mixtape and album covers, he built up clout with a millennial fanbase over the past few years while working with Suicideboy$, Wicca Phase Springs Eternal, and the now tragically departed Lil Peep. His latest project N/O/I/S/E pushes the subgenre further than its reductive title suggests, recalling Antichrist Superstar and Wisconsin Death Trip on cuts like Nihil and Flesh.

When Gucci Mane did a song with Marilyn Manson some years back, it surprised a lot of people. But for this Chicago-born rapper signed to the trap godfather’s 1017 Eskimo imprint, that’s pretty much his ideal sound. Lil Wop plays up the gloom and devilry on his Wopavelli mixtapes, the fourth volume of which arrived on Halloween last year. On songs like Pint Of Blood and Ghoul, he espouses the virtues of vampirism and floods his system with codeine-powered purple drank. On songs named for slasher films, he breathlessly namechecks luxury brands and recreational drugs. Not surprisingly, his music videos mix hip-hop tropes with scary B-movie thrills to amplify the urban horror themes of his lyrics. Resembling a croak more than anything else, Wop’s voice does take a little getting used to, but then again metal listeners are already used to odd vocal takes. That patience is rewarded on repeat listens in dark rooms.

Logging time both as a YouTube personality and as frontman for the nu-metal revival act Myth City, this British spitter seemed primed for his current SoundCloud rap trajectory. Sure enough, his adoption of the Scarlxrd moniker opened new doors for him. Following a series of self-released mixtapes, his Lxrd imprint linked up with Island Records for DXXM, a full-length project that unapologetically drops thrashy riffs amid bassbin wrecking beats. Produced by frequent collaborator Muppy, CHXKE kicks off with Slipknot-esque guitars before shifting into trap mode and ending amid industrial hum and buzz, making it the optimal entry point for the vocalist’s metalcore bellows. Emotional in his delivery, he sounds almost fragile in his screamed pleas for Hell Is Xn Earth, a miasma of self-harm and pointed nihilism. Showing no sign of slowing down next to a vibrant pool of competitors, Scarlrxd is expected to drop another album titled Infinity next month.