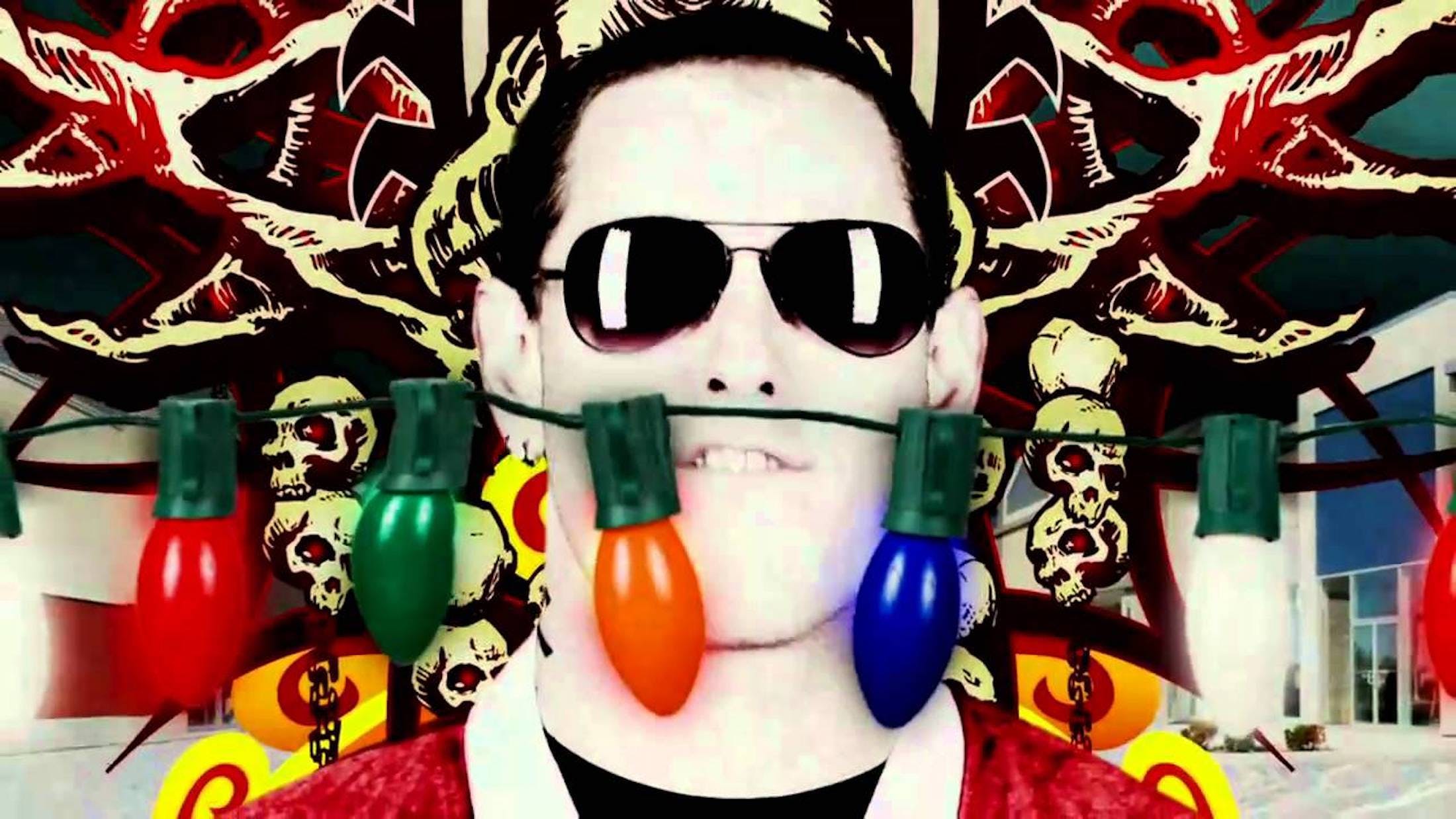 Corey Taylor, lead singer of Slipknot and Stone Sour, is an interesting chap. He’s a bestselling author, with several genuinely great non-fiction books to his name. He’s the only regular Kerrang! cover star to ever guest on both QI (where he shouted “SHUT THE FUCK UP!” to an impressed Sandi Toksvig) and Doctor Who (where he provided the roars for the Fisher King, a big-ass alien monster).

In 2010, Corey released a novelty Christmas single, giving all the proceeds from it to the Teenage Cancer Trust. He recorded it on a day off during a Stone Sour tour, producing it himself as well as playing guitar, bass and drums.

"It's actually a song that I wrote four years ago just for a laugh," he told Kerrang! at the time. "But when I played it for all of my friends they were like, 'This is fucking brilliant'. Personally, I love the holidays, but they seem to bring on severe stress in most people. So, I wrote this in honour of crotchety, drunken bastards who don’t know the difference between a yuletide and a toolshed. Plus, I think it's funny.”

00:02
Well this all seems pleasant enough. A snowglobe, a pleasantly festive house, and the jolly ho ho hos of Santa…

00:06
Which are suddenly replaced by a smoker’s cough coming from the most powerful throat in metal, Corey Taylor.

00:11
With the first bit of low-res imagery as we zoom into the house, the aesthetic of this video becomes clear: it’s been made on a shoestring, probably on a laptop over a few days, using a lot of public-domain and ‘lifted’ images thrown together in AfterEffects together with footage of Corey himself singing in front of a greenscreen. It’s weird how the aesthetic of a DIY video has changed – back in the day, doing a video on the cheap meant grainy footage, while now it potentially means total Technicolor chaos.

00:13
This room is really nicely done, though. Check out how the donkeys’ ears move. It’s awesome. It’s so close to what a genuine cheapo shitty saccharine Christmas thing would be – the kind of thing they’d play on all the screens in a superstore selling TV sets – just with the addition of a pentagram, beer, graffiti and what looks suspiciously like pornography on the CRT telly.

00:20
In another life, Corey would have been an awesome country singer. He’s said that a lot of the material he creates on his own draws from the genre, and that growing up in Iowa it’s impossible not to have a bit of a country influence.

00:36
As well as the large [email protected]$ on the wall, it says 'Your jingle bells smell', 'Suck on my Yule log' and 'Got your present right here'. This will not be the only smut the animator adds to the video.

00:37
Corey’s headwear changes to match each holiday he mentions: a witch’s hat for Halloween, a Native American headdress for Thanksgiving and a toilet seat for April Fool’s Day. What kind of toilet pranks are you playing that involve your head being inside the bowl, Corey?

00:51
What an entirely great chorus. Properly shoutalongable and weirdly joyous in its misanthropy. Glorious stuff.

1:03
'If I ain’t cock-eyed it ain’t Kwanzaa!' he sings. You don’t see a huge amount of Kwanzaa celebrations in the UK, so you might not be familiar with it. It’s a celebration primarily by African-Americans and the African diaspora, created in the 1960s to give African-Americans an alternative (or supplementary) festival to Christmas that involved African traditions and beliefs.

1:18
Another pretty impressive virtual creation, as Corey sits on a throne surrounded by stock-image women.

1:20
As every fourth commenter on YouTube has pointed out in the comments for this video, Corey looks a bit like M. Shadows from Avenged Sevenfold here. (Every third commenter has pointed out that he has a pretty big neck.)

1:32
Look at that real sense of self-satisfaction when he says 'Fucking infantile'. He’s a very likeable guy, Corey Taylor, and it’s weird to think how much a performer gives up when they choose to wear a mask. Like, his face does a lot of work here, letting him have his cake and eat it, letting him both show off and acknowledge that he’s showing off.

01:36
'My pole', the sign says. Whoever made the video has a fairly consistent sense of humour.

1:41
This footage comes from the 1938 version of A Christmas Carol, possibly.

1:50
It’s worth pointing out that, despite the awesome refrain 'If I ain’t drunk then it ain’t Christmas', this gleefully silly song doesn’t work when you think of alcohol as ruinous rather than fun.

1:52
It’s kind of hard to follow with how it’s all moving, but this seems to be a stretched-out monkey anus. That's the magic of Christmas.

1:56
Note the dreidel in the corner as a nod to Hanukkah.

2:02
That is not Corey’s real body. You can tell because it doesn’t have his tattoos. Otherwise there’d be no way of knowing.

2:28
“Hi, Simon!” Corey shouts as the song fades. This is aimed at Simon Cowell, who at the time pretty much had the UK Christmas Number One sewn up every year. “This is the season of goodwill. Screw X Factor and everyone else going for the Number One. Am I right?” wrote Corey on Facebook. [email protected]$ didn’t get to Number One – Matt Cardle’s X Factor-winning cover of Biffy Clyro’s Many Of Horror did it – but it raised money for a great cause, gave the world a raucous festive shout-along and provided whatever lunatic made the video with something to do for a few days. Lovely stuff.