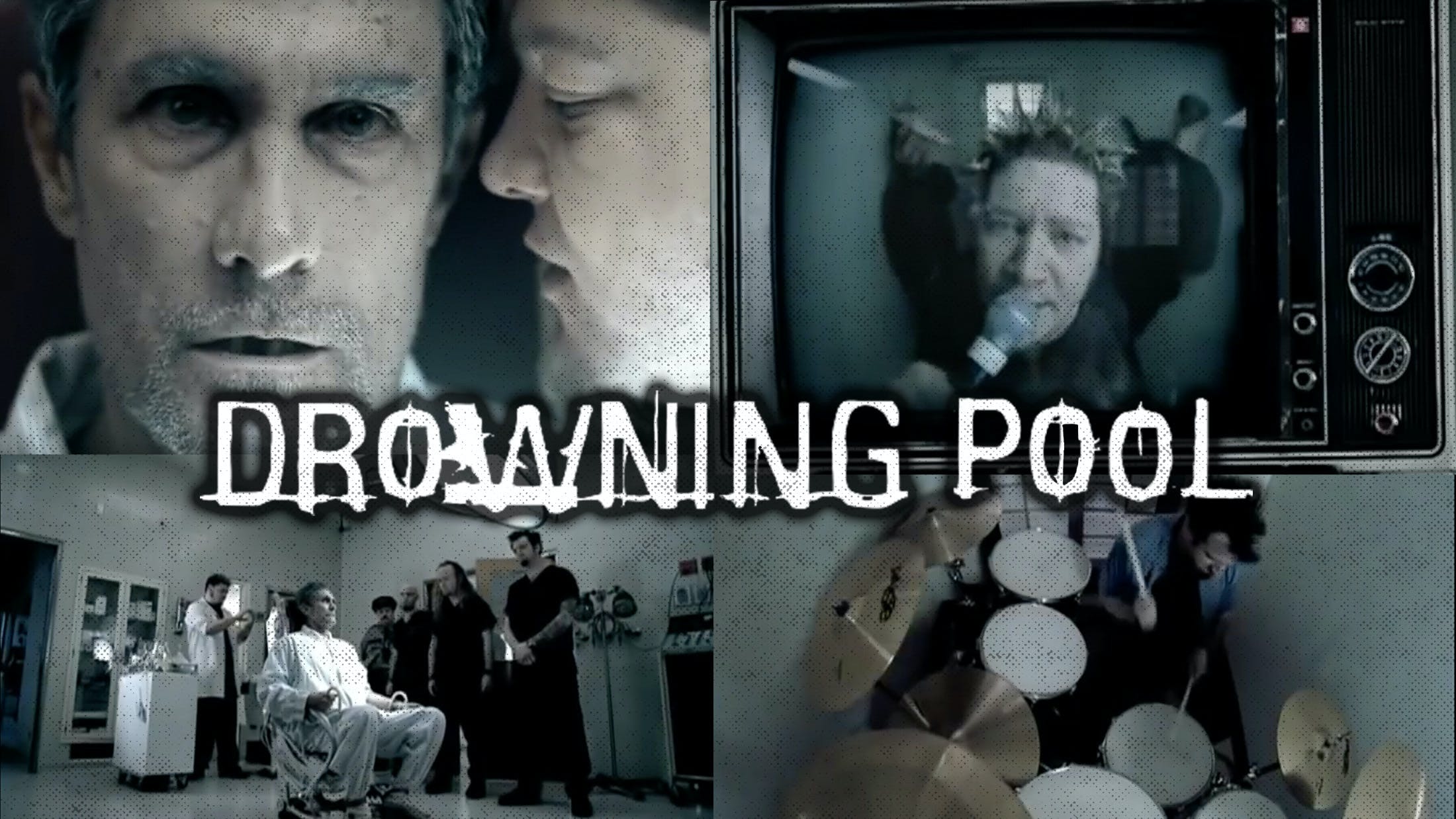 The thing with art is, however clearly you state your intentions, people will always misinterpret things. They’re all the more likely to if the art in question is loud, or aggressive, or comes accompanied by questionable facial hair decisions.

Today we’re going to take a look at a frequently misinterpreted modern classic, a love letter to a particular element of rock culture that is repeatedly, wilfully misread as a call to violence. It’s been mired in controversy, surrounded by tragedy and implicated in monstrous events. It’s also really loud! So let’s dive into the drowningest pool there is…

0.04
This is Dave Williams, the first vocalist for Drowning Pool. He joined the band in 1999, before which they’d been going for three years as an instrumental three-piece. Williams was given the nickname 'Stage' by Dimebag Darrell of Pantera due to his committed live performances. Tragically, just over a year after the release of Bodies, Williams was found dead, aged only 30. His death was determined to have been caused by an undiagnosed case of cardiomyopathy, a condition that affects the muscles of the heart. Drowning Pool have had three vocalists since – Jason Jones (later of AM Conspiracy), Ryan McCombs (who left SOiL to join Drowning Pool, and rejoined them after leaving) and current singer Jasen Moreno.

0.08
'Let the bodies hit the floor' is a line that has been massively misinterpreted over the years. The entire song is a love-letter to the moshpit, a celebration of that most primal, glorious way of partying. However, it has been interpreted as a call to violence, and for obvious and tragic reasons was taken off air following the September 11 attacks, a month after its release.

0.27
Bodies is among the songs used to torture prisoners in Guantanamo Bay, along with tracks by Marilyn Manson, Britney Spears, the Bee Gees and Barney The Dinosaur! Mohamedou Ould Slahi, who was held for 14 years without charge, recalled a 10-day interrogation in which Bodies would be blasted at him in conjunction with strobing lights. Bassist Stevie Benton was quoted as saying: “People assume we should be offended that somebody in the military thinks our song is annoying enough that, played over and over, it can psychologically break someone down... I take it as an honour to think that perhaps our song could be used to quell another 9/11 attack or something like that. [...] If they detain these people and the worst thing that happens is they have to sit through a few hours of loud music – some kids in America pay for that – it doesn't seem all that bad to me." He later said his remarks had been taken out of context.

0.34
This is a real disused medical facility. “They just pitched the idea of a gutted-out mental hospital and I was the first one to say hell yeah!” said Williams in behind-the-scenes footage. “The vibe there was extremely creepy.” The band got up to plenty of what they described as “shenanigans” while filming, including pratting about in morgue gurneys.

0.43
Watching this man recoil from the nu-metal being blasted into his face, it would be easy to think that no old people like Drowning Pool. Easy, but wrong. In 2016, 82-year-old former aerospace engineer John Hetlinger auditioned for America’s Got Talent by singing this song.

Guitarist C.J. Pierce later told Loudwire: "I am so entertained by it. It's awesome to just see an 82-year-old man get out there and just belt out some metal - whether it was our song or any song, it was just killer to see him do that. Obviously he had a great time with the song and we have a great time with the song every night so it would be awesome to have him onstage with us." Hetlinger ended up performing onstage with Drowning Pool on several occasions. Hey, look!

1.14
That microphone was, after Williams’ death, given to his friend Christian Machado from Ill Nino, who still uses it.

1.21
Guitarist C.J. Pierce, bassist Stevie Benton and drummer Mike Luce began as an instrumental trio. The three of them have consistently remained in Drowning Pool since 1996. The band took their name from the 1975 Paul Newman neo-noir film The Drowning Pool, directed by Cool Hand Luke director Stuart Rosenberg and based on a novel by Ross Macdonald.

1.40
Would you like to hear a parrot singing this part? Yes you would. This is Bodies as interpreted by Lolita, a six-year-old yellow-nape Amazon, back in 2010.

1.55
In 2011, a complete fucking dickhead – his name doesn’t matter, fuck him, he sucks – shot 19 people, killing six (including a nine-year-old girl), at a congressional constituent meeting in Tucson, Arizona. During his trial, a video was found on his YouTube account which had Bodies playing in the background, leading extremely lazy media commentators to speculate as to whether Drowning Pool had somehow turned him into a murderer.

Would that have happened if he had put classical music on the video? Would people have been asking whether the Mozart concerto he soundtracked his video to had twisted him into violence? No. It’s just one of the vastly too many times when metal has been made a scapegoat and blamed for the actions of idiots.

The band were forced to issue a statement distancing themselves from his actions. They said: “We were devastated this weekend to learn of the tragic events that occurred in Arizona and that our music has been misinterpreted. Bodies was written about the brotherhood of the moshpit and was never about violence. [...] We support those who do what they can to keep America safe. Our hearts go out to the victims and their families of this terrible tragedy”.

2.05
Drowning Pool managed to tick every nu-metal hairdo box there was – dreads, frosted spikes and, atop guitarist C.J. Pierce, one of the genre’s greatest ever beard/no-hair combos.

2.11
There’s a bit of ambiguity surrounding who actually made this video. The Internet Movie Database and Wikipedia both credit the direction to Glen Bennett (who appears to have no other credits), but the Internet Music Video Database credits it to Paul Hunter, who has done hundreds of other videos. Hunter’s CV includes Will Smith’s Wild Wild West, Marilyn Manson’s The Dope Show and pretty much everything Jennifer Lopez ever did. The IMVDb claims the only video directed by anyone named Glen Bennett is Looking Down by alt.rock band Audiovent. What’s going on? No idea!

2.56
It’s very hard to make out, but Williams had “SINNER” tattooed down his arm, which became the title of the album Bodies came from. Here’s an incredibly low-quality video in which he talks about his love of body art, being looked at and astrology.

3.00
Williams described the writing of Bodies on the TV show Uranium, which also used extracts from the video in its opening credits. “CJ came up with the riff, and I thought that was cool,” he said. “And I said, 'Let the bodies hit the floor,' and they looked at me and said, 'That’s pretty cool.' We just built it around that hook and the rest fell in place. It’s about my perspective when I look out and see the pit. It’s about forgetting everything that has happened to you that week – leave your bullshit at the door and get it all out. But you have to have respect for the others in the pit. If you push them down, you have to pick them back up. I’m not going to get behind the violence thing, it is violent, but there is a certain amount of respect and a code.”

3.19
This man’s name is Vic and he might not be acting. There doesn’t seem to be any record of his full name anywhere, and in making-of footage, he proclaims himself to be the President of the United States…

Let the bodies hit the floor... in the most brutal way possible

Drowning Pool are back with a brand-new song and album! Find out everything you need to know here…