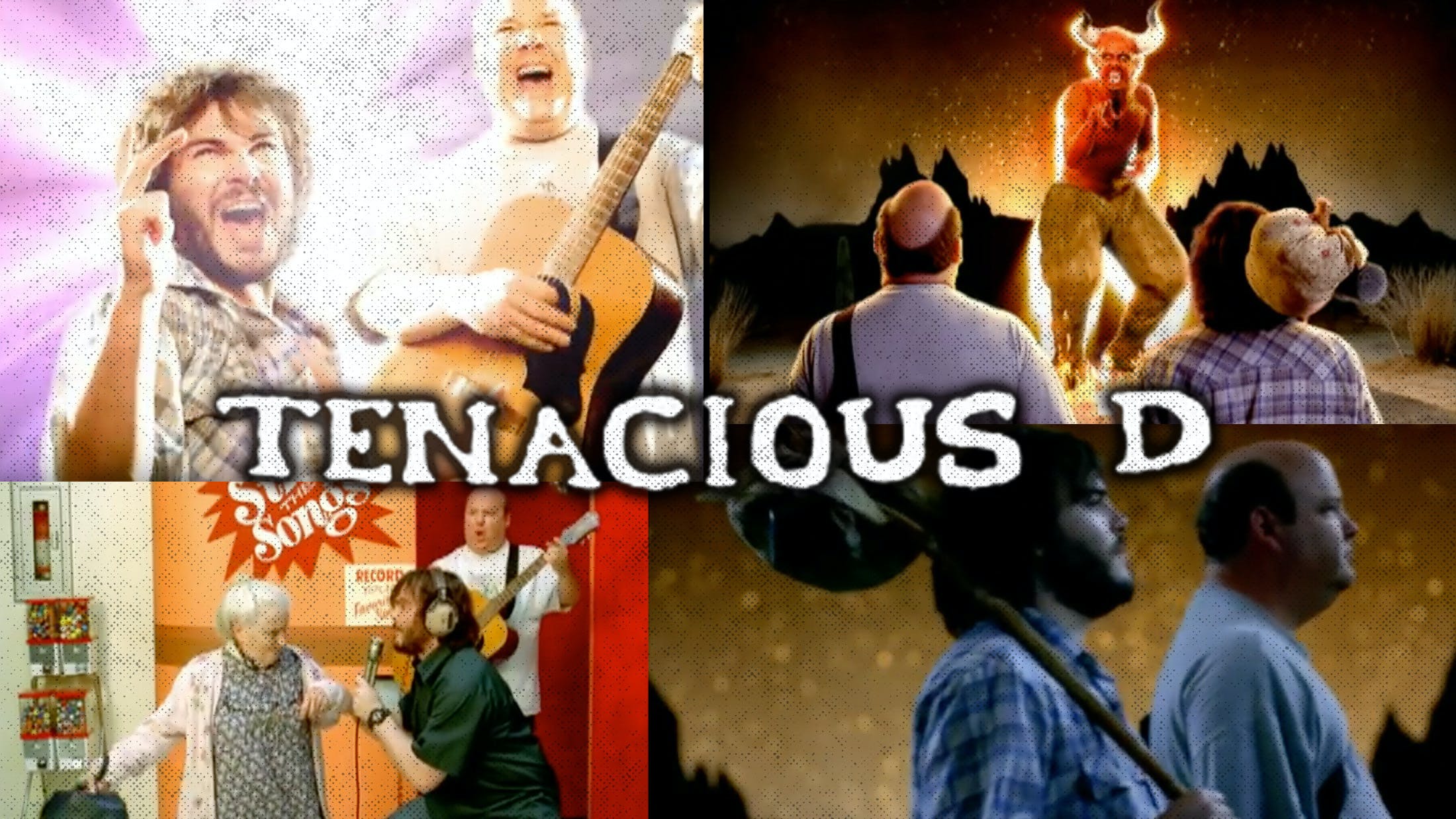 Charisma is a powerful thing. Is Jack Black the best actor in the world? Not necessarily, although he’s pretty good. Is he the best singer around? Possibly not, although he has a powerful voice. But what he has, that can’t be learned or faked, is presence. He just has an awesomeness to him, an immense magnetism that makes him hard to take your eyes off. This combined with the ability to belt a tune out, his massively infectious enthusiasm for metal and some of the greatest dance moves in history, has made him into a superstar. His whole career has come from established, famous people seeing him and going, 'Whoever that guy is, I wanna work with him.' That’s pretty awesome.

While Black seems to enjoy being an enormous movie star, his real passion seems to be his band, Tenacious D, a two-chunky-dude operation with his best pal that has achieved huge cult status and is just really hard to dislike. This video might be their crowning achievement, a Satan-battling masterpiece from 2002 featuring DIY studio engineering, A-list cameos, a legendary shirt-rip and an ever so shiny demon. Let’s dive in!

0.02
For a while, these karaoke booths were a thing, popping up in malls and service stations. For a not-amazing fee, you could sing along to a track and get a CD burned for you. Some offered options like posing for a cover photo. The CD ones aren’t really a thing anymore, but there’s a new trend in malls in China for solo karaoke booths where you sing not to entertain anyone else but just to let off steam. Really feels like you can do that without paying for it, but each to their own.

0.09
It takes a while to get to the actual song – there are some sitcom-style hijinks to get through first. Appropriately, Tenacious D’s first high-profile project was a self-titled sitcom. Well, we say high-profile – there were three episodes, which aired once a year over a three-year period. That is Jack Black, of course, already fairly famous by this point thanks to supporting roles in some fairly big Hollywood films and his breakout role as Barry in High Fidelity. The less hairy member of Tenacious D is Kyle Gass, Black’s best friend and godfather to his son.

0.15
The spacing where it says 'Studio' is very off, isn’t it? But check out all the acting! Glorious stuff. The pair met as actors, becoming friends while working on a play together at the Edinburgh Fringe Festival as part of Oscar-winning actor Tim Robbins’ troupe. Robbins would later cameo in the film Tenacious D in The Pick Of Destiny, directed by this video’s director Liam Lynch.

0.42
Jack Black is not a studio engineer. However, his half-brother Neil Siegel is an extremely successful engineer, and was instrumental in developing the technology that lets the GPS on your phone auto-orient.

0.56
Black and Gass are professional performers, and understand the extra little polish that something like being slightly twisted up in cables can add.

0.59
This sounds a bit like Stairway To Heaven, a song often described as being one of the greatest songs in the world, but the inspiration for Tribute actually came from Metallica. Black played One to Gass, describing it as “the greatest song in the world”, and after listening to it the pair decided to write a song that was even better. Finding themselves unable, the idea of a tribute was born.

1.07
Tenacious D’s first show in 1994 consisted solely of this song, and included a section where the audience were enlisted to help decide on the band’s name. Other options were Pets Or Meat, Balboa's Biblical Theater and The Axe Lords Featuring Gorgazon's Mischief. The name Tenacious D (a basketball term coined by commentator Marv Albert referring to a tenacious defense strategy) didn’t win the popular vote, but was adopted anyway. Comedian David Cross was at the show, and put Black into his HBO comedy series Mr Show. Also in Mr Show was Maynard James Keenan, and Tenacious D found themselves opening for Tool in 1995.

1.12
Gass and Black are not really brothers.

1.29
The shiny demon is, of course, portrayed by Dave Grohl of everything fame (everything meaning Nirvana, Foo Fighters, Queens Of The Stone Age, Probot and officially being the Nicest Guy In Rock™). Black and Gass befriended Grohl after he was persuaded to attend a Tenacious D show at the Viper Rooms in 1997 by his former Scream bandmate Peter Stahl. Grohl ended up drumming on the Tenacious D album, putting Gass and Black into the Learn To Fly video and bringing the band out on tour to support Foo Fighters. That’s that Jack Black magnetism – everyone who saw him knew he was set to be a star.

1.56
Look at the amount of work Jack Black’s face does in this. It’s awesome.

2.35
Good snort there, from both Black on the audio and Grohl on camera.

3.06
Not a lot of commercially successful songs have punchlines, let alone punchlines played halfway through them. Maybe they should.

3.28
If you are a big fan of this next a capella bit – and who isn’t? – you might enjoy an hour-long looped version.

3.39
The shiny demon has a shiny guitar! Guitar on the record, in addition to that performed by Black and Gass, was provided by The Vandals’ Warren Fitzgerald. The same year, Tenacious D had sung backing vocals on the incredibly problematic Vandals song You’re Fourteen.

3.47
This little old lady is actress Linda Porter, who has appeared on Twin Peaks, American Horror Story and Malcolm In The Middle.

4.03
Look, it’s Ben Stiller! Stiller had directed Black in the incredible/daft unaired TV pilot Heat Vision And Jack, in which Black played a super-intelligent former astronaut whose motorcycle is voiced by Owen Wilson. Stiller and Black would later work together in Tropic Thunder. Heat Vision And Jack, co-created by Dan Harmon who would later create Rick & Morty, is very much worth watching. It’s breathtakingly, impressively stupid.

4.12
That is director and editor Liam Lynch in the hoodie wearing glasses. Lynch is a musician and filmmaker best known for his 2002 novelty hit United States Of Whatever, which is excellent.

4.24
That 'flapping wings behind the back' bit is like Jack Black’s signature dance move, and is of course breathtaking.

4.25
This police officer is played by JR Reed, who appeared in the Tenacious D TV show and is a member of Kyle Gass’s side project Trainwreck. He also performs on tour with Tenacious D, playing Satan when they perform this song.

4.39
That is indeed the debut Tenacious D album.

4.50
An even more Stairway-esque sting, and it’s over. Glorious, masterful stuff. At once a giant banger of a song and a really silly joke, a confidence-booster for men with body types not often shown on screen, a showcase of two performers’ finely honed acting skills and hopefully a really fun afternoon for Dave Grohl.