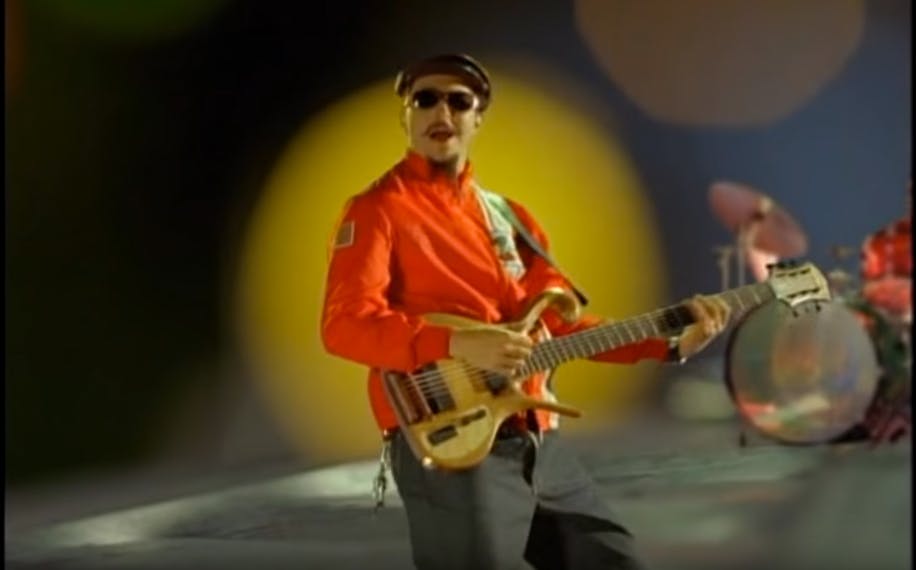 Date formats are weird – in different countries, the same date will be written in different ways. In the UK, April 20 it's 20/4 for instance, while in the U.S., the Phillipines and some parts of Canada opt for 4/20.

4/20 is also a big thing in weed culture, of course. Due to a reasonably boring backstory involving a group of stoner pals and a statue, April 20 has become a big important day to pot-smokers everywhere. And, with the possible exception of Phish and The Grateful Dead, few bands are as synonymous with stoners than the one and only Primus.

(There’s something pretty amazing about a band being more synonymous with stoners than any actual stoner rock band. There’s whole swathes of bands who write about being stoned, but Primus out-stone them all. Madness.)

0.02
The bug zapper was prototyped in 1911 but not honed and patented until 1932. They are properly known as electrical discharge insect control systems.

0.08
This is the first look the world got at new-to-Primus drummer Bryan “Brain” Mantia, who had just joined the band after… there's something a bit funny about his movements

0.09
Les Claypool on bass and vocals there. He also directed this video. There’s something a bit funny about his movements as well...

0.18
So, here’s what’s going on. You know the Avril Lavigne video I’m With You? This has been done in exactly the opposite way to that. Making the Lavigne clip, they played a sped-up version of the track for her to lip-sync to so they could slow the footage down and make it all poignant-looking. This one involved playing along to a slowed-down version while still moving really fast, and then speeding it up to create an unsettlingly jerky, please-mummy-make-it-stop, faster-than-anything-in-the-world, million-dollar-bass-thumb effect. You can see some of the un-sped-up footage in this behind the scenes footage.

Les Claypool had used a similar technique in Primus’ earlier video for Wynona’s Big Brown Beaver, in which the band were dressed as really disturbing life-size plastic cowboys and it was all horrible.

0.34
A dad being wacky, there. Claypool knows a thing or two about being a wacky dad – here is a nice clip of him bringing his kids out on stage to play on his ‘whamola’, a custom-made hybrid instrument that he is one of the world’s most prominent players of.

0.50
Claypool’s frankly magnificent legwork here may or may not be a homage to Keep On Truckin’, an oft-imitated cartoon by ‘60s counterculture legend Robert Crumb. There is definitely a reasonable crossover in the Venn diagram of Primus fans and Robert Crumb fans, and that Venn diagram smells like weeeeeeeeeeeed.

Talking of weed, Claypool once bought some off Metallica’s Kirk Hammett, who he went to high school with. He once described his relationship with the ol’ wacky backy to Louder: “Larry (Lalonde, Primus guitarist) and I were pretty much stoned during the writing of our first three records, but there are stoners and then there are stoooooooners! Our old drummer Jay Lane was a real stoner, I mean the kind of consumption he could get through was unreal. I’d just pick it up and put it down throughout the day – I’ve never been one for overindulgence, because, well you can see it in my songs, there is a lot of substance abuse in my family. My cousin is in and out of prison all the time with a speed problem and I lost my uncle at fifty. He was a tweaker, he was on speed, so I’ve always known to keep an eye on it and knew that this behaviour was in my DNA… That being said, yes, I did enjoy marijuana and I still do to this day. I have my vaporiser and I like to visit it now and again.”

1.28
'Steal us some wine', sings Claypool. Claypool, like Tool’s Maynard James Keenan, has his own vineyard, swapping his long love of weed for a pinot noir habit. “Having traded my smoking vice with a thirst for pinot,” he says, “a couple of buddies and I decided to make some vino from a ton of fruit that became available to us just so we could fill our cellars with juice.“

1.31
If you’re thinking to yourself, 'Hey, I want some glasses like Les Claypool', there is good news and bad news. The good news is that they are commercially available, and not some specially-made prop. The bad news is, they’re vintage Jean-Paul Gaultiers and a similar pair – here’s one – will set you back somewhere in the region of £600.

1.33
It’s a gross, weird title for a song, isn’t it? It sounds a bit, um, masturbatory? It’s actually a reference to a friend of the band who struggled with his all-veggie diet. “A buddy of mine was a vegetarian” says Claypool. “Whenever he would fall off the wagon, he would say, 'Oh, I'm going to go shake hands with beef.' So it sort of became this metaphor for deviating from the norm.”

1.45
About one in three of the comments on this video on YouTube are enquiries as to the identity of this actress. No idea, sorry. Writing these things involves reading half the internet, and her name isn’t anywhere to be found.

2.29
This is all shot on Claypool’s ranch, Rancho Relaxo, also home to the recording studio all Primus’ albums are made in.
2.40
The crossed eyes there are extremely good. They’re on Giphy.

3.04
There is next to no chance that this special effect is a deliberate nod to the Harry the Fly character in the underrated-but-largely-forgotten Canadian family sitcom Maniac Mansion, but it totally looks like one. Maniac Mansion was created by Eugene Levy, best known as Jim’s Dad in the American Pie films. A parody of Levy once showed up in South Park, in the episode Funnybot, which like all South Park episodes featured Les Claypool and Primus in the opening credits. WORLDS COLLIDIN’.

3.39
It must be a lot of fun being Les Claypool. You spend your days hanging out on a ranch quaffing wine, and your nights slapping the shit out of big-ass bass riffs, and occasionally do something silly like dress up as a plastic cowboy or dangle off a rope in front of a green screen pretending to be a fly.

3.54
Oh, he’s dead. It’s fair to say Primus can be something of an acquired taste, and for everyone that can’t get enough of them, there are people who are left entirely cold. This video was posted on reddit once, and one of the comments was the needlessly mean “How is that good? It just isn't.” Dude, you’re harshing our buzz.