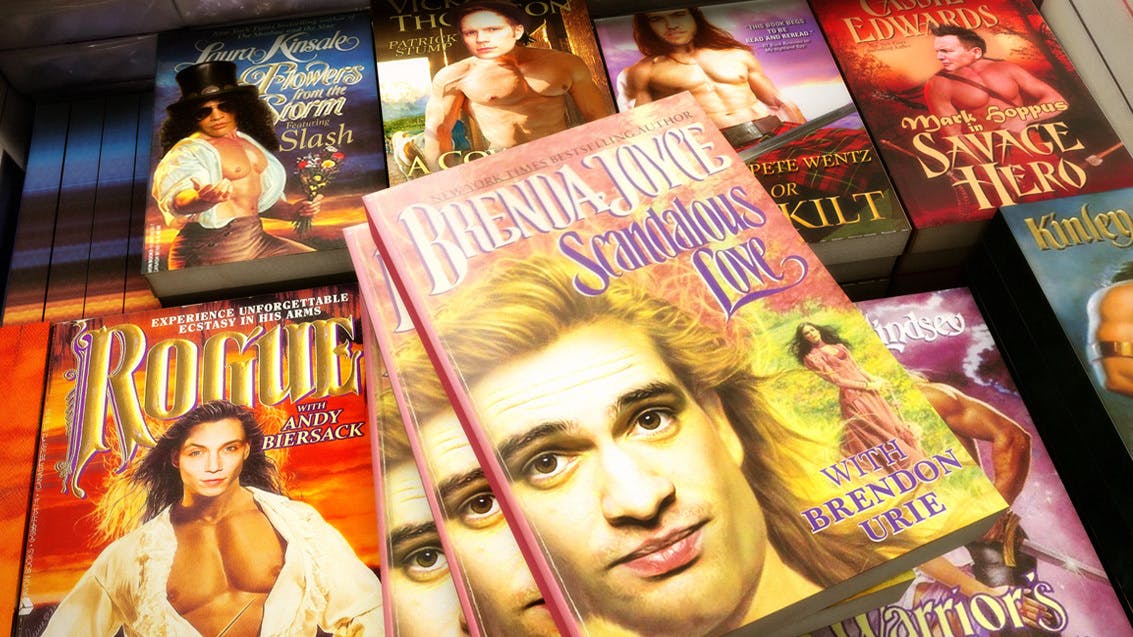 There are many different ways to love a band. Some people listen to records on loop, learning every song by heart, feeling every chord change. Some wear band T-shirts until they’re threadbare, or cover their pencil cases in felt-tipped logos, or get tattoos, or spend thousands of pounds following their idols on tour. And some people write fanfiction, making up stories featuring their favourite rockstars and placing them in whatever situations they wish.

Usually a mainstay of science-fiction and fantasy (the Fifty Shades Of Grey books famously began life as a Twilight fanfiction offshoot), fanfic also extends into the world of music. It’s the kind of thing it’s easy to be a dick about, but we're not going to do that. Instead, we've dived headlong in…

WARNING: It all gets quite full-on quite quickly, this, so be extremely wary about clicking on any of these links.

It Can Be Very Sweet

A lot of fanfiction takes the form of wish-fulfilment, with fans writing stories in which they simply meet their heroes. There’s something sort of adorable about a story where the lead character goes to an art gallery, meets Marilyn Manson, makes him laugh and goes home. No weird stuff (there’s plenty of that coming later), just a very enthusiastic imagining of such a scenario:

Manson liked how you bit back twice as hard at every comment he made. You were witty and funny and he liked spending time with you. He could feel people wanting to come and snatch him away, but he wouldn’t let them. He just wanted to show you every painting he’d ever done and maybe take you out for dinner afterwards.

Awwww. There’s also a whole area known as 'songfic', where fans take the lyrics of a song and rewrite them into narrative form, usually involving characters from reasonably obscure anime. It’s a way of doubling down on the niche appeal that is faintly baffling, but pleasant enough.

People Really Commit To These Things

Did the world need a 28-chapter, 44,000-word Paramore/Twilight crossover story, in which Twilight protagonist Bella Swan changes her name to Hayley Williams, starts a band and finds herself in a love quadrilateral? No, but is it a richer place for it? Jury’s out, really.

Four years in the writing, and including both lengthy sections copied and pasted from Wikipedia and a key plot point revolving around watching Kerrang! TV, it’s an exhausting read, but there’s definitely something impressive about the sheer scale of it – it’s longer than Animal Farm or The Old Man And The Sea, and twice as long as Franz Kafka’s Metamorphosis. Even if you’re not bowled over by sentences like, ‘Let’s face it, if I told them about me having sex and getting impregnated by a vampire I’d end up in a room with blue padding on the walls (not mine)’ the commitment is at least commendable. Plenty of people spend decades intending to write a novel and never break the 5,000-word mark.

Yep, pretty much. A large component of fanfiction in general involves placing characters of the same sex in romantic relationships – it started with Star Trek fans writing Kirk/Spock stories, and due to that little bit of punctuation between the names, is known as “slash fiction”. Slash fiction is nothing to do with the big-hatted GN'R guitarist – although stories about him and Duff McKagan in a slave/master relationship do exist:

Slash, once again, felt completely under Duff's control. Duff glanced over at Slash and smirked. Slash needed him. He couldn't resist. He wouldn't dare. Not since he'd offered himself to Duff earlier that day while in the throes of passion.

It’s all about placing people, usually pairs of heterosexual men, together. It started with fictional characters, and the jump to the “real person slash” that some music fans indulge in makes parts of the fanfiction community actually quite uncomfortable. There are a lot of legal disclaimers, libel risks and extremely grey areas, but it seems like for every pleasant light-hearted tale about going to the zoo with a rockstar there are about a hundred more surprisingly graphic stories of sweaty band members really going for it.

There are certain pairings that come up again and again – often two guys from the same band that have a really strong, clear friendship. It apparently started with Muse – fans of the band would write stories about a romantic relationship between Matt Bellamy and Dominic Howard, which became known as 'BellDom'. Andy Biersack and Ashley Purdy from Black Veil Brides are known collectively as 'Andley' and are the subject of a surprising amount of stories where one of them dies in front of the other:

Walking over to the bed, I can finally see Andy’s face. He looks so vulnerable: his skin is sickly pale, his breaths are slow and laborious, and I can’t help noticing all the machines and monitors that he’s attached to.

“You’ll make it through baby, I know it. You were always a fighter” I murmur, tucking a strand of hair behind his ear.

Other popular pairings include Patrick Stump and Pete Wentz from Fall Out Boy, and Frank Iero and Gerard Way from My Chemical Romance, collectively 'Frerard'. There is another, more extreme pairing involving MCR members, but it’s wholly unnecessary and we absolutely won’t go into that…

But Sometimes In Less-Expected Pairings

You know what? Sometimes when you think you’ve figured something out, it turns out you don’t actually know anything at all. We thought we’d worked out the pairings – generally two guys from the same band, who are usually very good-looking in delicate, angular ways. Like, there’s a lot more stuff out there about Black Veil Brides than Mastodon.

But when you dig really deep, you find stories about Iron Maiden’s Bruce Dickinson pairing up with Placebo’s Brian Molko, Green Day’s Billie Joe Armstrong and Johnny Rotten from the Sex Pistols, and Children Of Bodom sticking courgettes up each other’s bottoms. All bets are off and anything can happen, apparently. There’s a story about blink-182’s Mark Hoppus copping off with – of all people – Darren Hayes from boring ’90s band Savage Garden…

Yeah. Gender-swapping a character is a fanfiction staple, and there have been stories about female versions of Captain Kirk and Mr Spock since the ’60s, so naturally, people extend this to stories about real people as well. These stories are often labelled with oddly-used exclamation marks – for instance, this story of Patrick Stump being propositioned by a naked female version of Pete Wentz has the label 'Girl!Pete'.

“‘Trick?” She wonders if she’s misjudged everything horribly, nerves warring with arousal for which can drive her heart rate highest. “Don’t you… I mean, isn’t this what – what you want?”

“Fuck, Peep,” he whispers, fists clenched against the comforter and a voice that stings with accusation. That doesn’t seem entirely fair when he couples it with the nickname he knows only he gets to use. “What the fuck are you doing to me?”

And Occasionally Batman Shows Up

It makes sense, right? Nobody only likes one thing. You’d expect loads of My Chemical Romance fans to also like Batman – Gerard Way is a huge comic-head, Batman and MCR have badass costumes in common, the whole Danger Days album is comics through and through, and Batman is the total best so everyone loves him. So, sometimes, Batman characters (or Star Wars characters, or Twilight characters, or anyone, anything, Hobbits, why not, anyone) show up in fanfiction. We learned that from this story, in which a female version of Gerard Way (Girl!Gerard, see above) encounters a female version of Robin (samesies) during a foiled mugging. It's sort of the prose equivalent of playing with action figures and having He-Man fight a Ghostbuster.

Gerard hid his smirk against Mikey’s shoulder as Frank half turned to pout at Ray, eyes big and pleading. “But Ray! I like being pregnant! And we always find them good homes!” Frank did like being pregnant, Gerard knew. He was an amazing sort of content the entire time, happy and cuddly and fucking glowing with joy and new life.

It’s… nice? Maybe? Or maybe by this point we’ve just read too much of this stuff and mild Stockholm Syndrome is kicking in. Black Veil Brides are at it too, Andley's exploits resulting in baby bumps and happy families.

There Is Such A Thing As Too Many Ideas

Sometimes there are more elements than it feels like one story ever really needs. In one tale, for instance, former Of Mice & Men frontman Austin Carlile is a vampire-werewolf hybrid who pals around with the all-werewolf band Pierce The Veil while being kept under close surveillance. There are also ghosts, prophecies and the exclamation “Yeah! Sex is amazing!”

Then there’s one in which Avenged Sevenfold are framed for a bunch of religious terrorism that leads to the actual Apocalypse, while being hunted by the main character of the Channel Five crime drama Justified, all set in the world of Call Of Duty: Ghosts. There are too many things going on. It’s exhausting…

And Of Course, Some Of It's Just Rubbish

This story of Pete Wentz waking Patrick Stump up for a band meeting is only 486 words long, but manages to be completely baffling, partly due to the author’s confusion about, er, vessels. Read this extract and try not to feel disappointed in the rubbishness of it:

“If you get off the bed, I’ll make you a cup of coffee.”
Patrick stiffened in the bed, but his tone was skeptical. “A cup?”
The bassist blinked. “I can make you two if you want!”
The blue-eyed man yawned, getting back to sleep.
“Okay, fine!” Pete exclaimed. “I’ll make you a whole mug of coffee!”
Patrick opened his eyes, grinning from ear to ear. “Well, why didn’t you say so?”