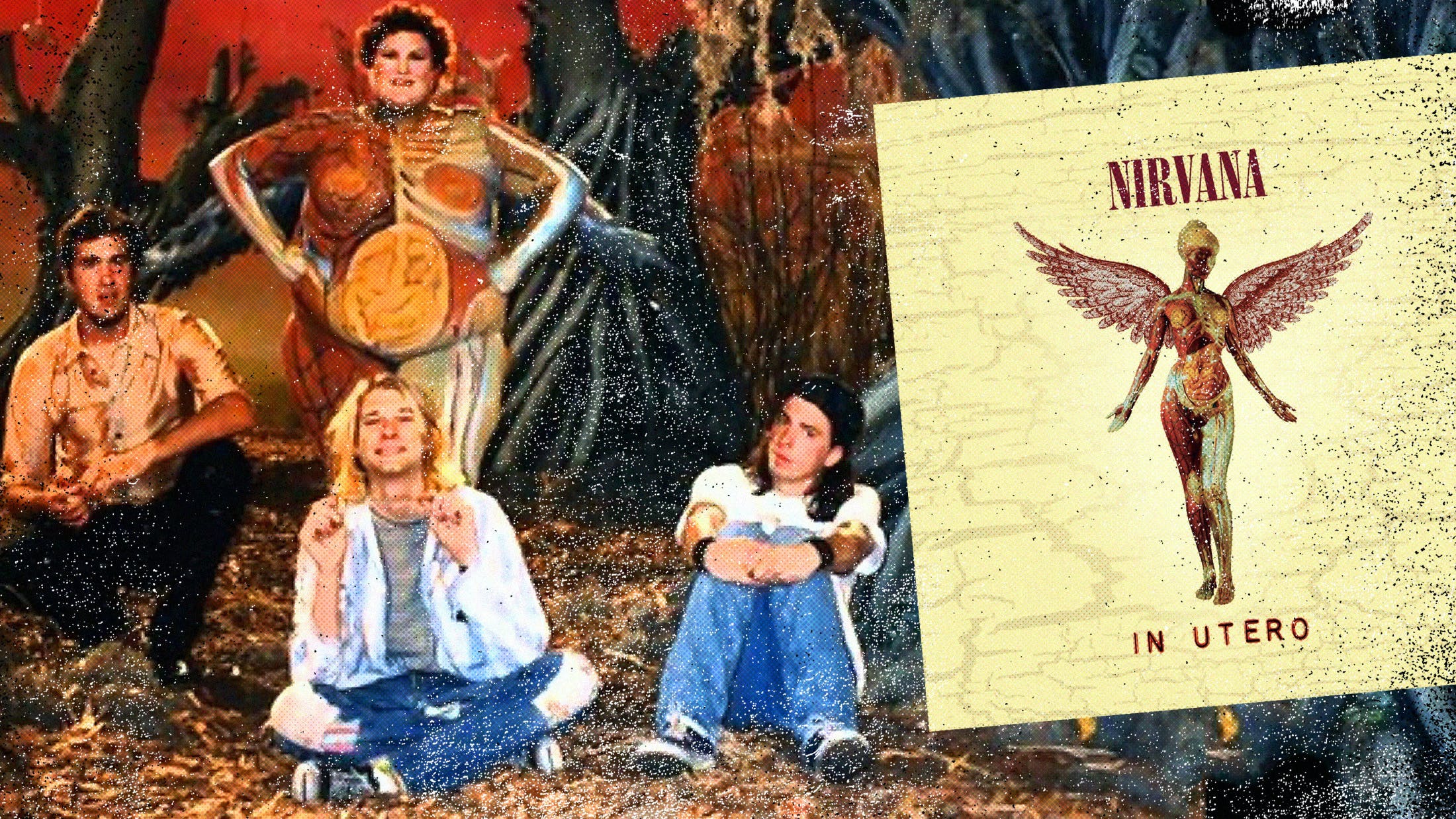 Amazingly, it is well over a quarter of a century since the release of Nirvana's Heart-Shaped Box single and its surreal, artistic, baffling, and haunting accompanying promo directed by Anton Corbijn based on a treatment by Kurt Cobain.

The video was immediately iconic: religious iconography, a striking visual treatment and, at the centre of it all, Kurt, a man at the height of his fame and success, ill at ease with both, about to release In Utero, the follow-up to the smash hit Nevermind, a 26-year-old who would die at 27.

Let’s take a deep dive into the video and see what we learn, eh?

0:01
We start fairly strikingly, a top-down shot of a hospital bed with an old man in it, a glimmer of light shining through the curtains, a cross on the floor. Of immediate note are two things: firstly, the impressive visual composition, testament to director Anton Corbijn’s background as a still photographer, and secondly the topmost pair of trousers, which are quite something.

0:07
Seeing the scene side-on, we realise that it’s the ’Vana boyz themselves on the bench. The nutso trousers belong to bassist Krist Novoselic on the left, drummer Dave Grohl’s in the middle and singer/guitarist Kurt Cobain is closest to us. And that fella in the bed doesn’t look well. Fairly spacious room though – must be a private hospital.

0:12
Whoa. We’re in a Technicolor landscape as a dirty, emaciated figure in a loincloth and Santa hat picks poppies. It’s the elderly chap from the bed. There’s another cross behind him. He’s… oh, he’s Jesus. He’s a sort of really knackered Jesus. Kurt initially wanted William S. Burroughs – legendary counterculture writer (Junkie, Naked Lunch) and a hero of his – to play the old man, but he refused. The frontman offered him the option of doing it anonymously, so keen was he to work with the author. He wrote, “As a fan and student of your work, I would cherish the opportunity to work directly with you. To the extent that you may want to avoid any direct use of your image… I would be happy to have my director look into make-up techniques that could conceal your identity. While I would be proud to have William Burroughs appear as himself in my video, I am more concerned with getting the opportunity to work with you than I am with letting the public know.” They later met and had a lovely afternoon together; Kurt described it as one of the high points of his life.

0:25
Kurt’s singing the title, so let’s have a look at what the song actually means. He said it was about children with cancer, his biographers claim it’s about his relationship with Courtney Love, and Courtney herself once claimed – in a Twitter spat with Lana Del Rey after she performed a cover of the song – that it was about her vagina. The most likely scenario seems to be that it is a love song, possibly incorporating both the strengthened feelings for another person one often experiences when exposed to tragedy and perhaps some kind of bonus vaginal in-joke. In Heavier Than Heaven, Charles R. Cross’s excellent Kurt biography, the writer memorably describes the lyric, 'I wish I could eat your cancer when you turn black,' as "the most convoluted route any songwriter undertook in pop history to say 'I love you'". Or, like the album’s title, it’s a reference to the uterus – there’s plenty of foetal imagery to come, and you can just about interpret a uterus as being heart-shaped…

0:28
…as the old fella climbs up onto a cross (quite full-on, innit). Ooh, crows, nice. These were an Anton Corbijn decision. “Kurt had sent me a script that became 90 per cent of the video,” the director later told the New Yorker. “I added some stuff – the big woman ‘mother earth’, the road through the poppies, the fake birds, fake butterflies – but this was very much Kurt’s video.”

0:43
Poppies aren’t just any flower, of course. Heroin, a drug with which Kurt Cobain was tragically more than familiar, is derived from a member of the poppy family.

0:48
Look, it’s Nirvana again! Krist is in more sensible trousers now, but the colours in the whole video are nuts, hyper-real, due to a labour-intensive but incredibly effective treatment process. The footage was shot in colour, converted to black and white and sent to Mexico, where every frame was hand-painted in a style intended to resemble Technicolor, the highly-saturated colour style of the films of the 1940s. It sounds implausible and hideously time-consuming, but it’s what they did.

0:49
Wedding rings are conventionally worn on the left hand, but then, that is in a right-handed world. Kurt was right-handed, but played guitar left-handed, re-stringing an inverted right-handed guitar – maybe that’s why he chose to wear his wedding ring on his right hand? Or, you know, he just did. Each to their own.

1:09
The crow lip-syncing (beak-syncing?) was another addition by Anton Corbijn. “Some stuff was not scripted,” he told Spin magazine. “The birds stuff was my kind of Dutch humour, I guess.” Oh Anton, you wacky Dutchman.

1:20
Krist Novoselic is colossally tall. He’s 201cm head to toe, which is flippin’ huge. The only rock star taller than him, ever, was the late Peter Steele from Type O Negative, who reached a whopping 203cm.

1:30
Weird crazy religious visual part two: a little girl dressed like a bishop looking at foetuses dangling from a tree. The girl’s name is Kelsey Rory, and at the time of filming she was six years old. In 2016 – 23 years later – she met Dave Grohl again, writing on Instagram: "Today reminded me that I peaked at 6 years old but I was the most badass kid on the playground. Today was the absolute coolest. Or in Dave's words seeing each other today was a 'historic moment'! What a legend!"

1:32
Foetuses and the woman painted as an anatomical model echo both the title and artwork of In Utero. It would be a bit on-the-nose if a director had just come in and done it all, but remember, the video treatment was Kurt’s – he was on a bit of a foetus thing at the time.

1:49
What’s going on with all the religious stuff, then? Christian philosopher Taylor Marshall interprets it as a comment on the Catholic Church’s stance on abortion: “The little girl is dressed like a KKK member, but also like a Pope. She represents the conservative, Christian, fascist, fundamentalists. Her costume relates her to the Pope (pro-life) and the KKK (conservatism, nativism, fascism)… We’re dealing with mental insanity, or Satanism or both.”

2:38
Krist Novoselic is a pretty cool dude. He just had the bad luck of being the third coolest dude in a three-piece band featuring two of the most charismatic musicians of all time. Kurt Cobain, the beautiful, tragic, immortal poet, and Dave Grohl, the charming, cheeky, absurdly likeable polymath. Actually, Pat Smear is incredible, so Krist was somehow the fourth-coolest dude in a three-piece band. Nonetheless, here are seven interesting things about Krist Novoselic:

2:57
Oh, what, shit, world colliding, what, huh, what, where, how? So, God is dying, seems to be the thing here. Is it a commentary on the fading influence of the Church on the world? Is it a metaphor for Kurt Cobain’s own dalliance with religion in his youth? Is it just super hella dramatic?

3:01
There’s those trousers again, although now that we know about the colour treatment the whole video got, who’s to say what’s really going on? Kurt’s excellent silver jacket might not even be silver. Life is a mystery.

3:21
Dave and Krist remain close friends and occasional collaborators, with the latter popping up on various Foo Fighters projects over the years. The pair of them (along with the great Pat Smear) collected an MTV Music Video Award for Heart-Shaped Box in 1994, not long after Kurt’s death. Their acceptance speech is very much worth watching, if you can get through the intro by TV’s Roseanna and the badly written, hideously delivered, incredibly poorly-received bants Toni Braxton and Tony Bennett half-arse their way through by way of announcing the nominees. Dave Grohl is clearly very emotional, then towards the end realises it’s a bit of a downer, so suddenly kind of slaps himself upbeat, flashing a big grin. It’s sad, and nice. His speech in full is: “I’m not the most vocal person in the world, but it would be silly to say that it doesn’t feel like there’s something missing. I think about Kurt every day, and I’d like to thank everyone for paying attention to our band. Thanks!” Short but sweet.

3:34
It turns out the best special effect in the video is Kurt Cobain. More interesting than the costumes, gimmicks, religious allegories, shocking imagery, everything. Just a fascinating, charismatic, compelling man.

3:40
This bit – gotta come right out and say it – is shit. A box with a heart on it, for the song Heart-Shaped Box. Yeah? It’s clumsy and a bit rubbish. It’s very brief, though.

3:42
This is better, the tight shot where you can’t see the heart. Krist Novosoelic barely fits in this room. The man is like a human tree.

3:54
Dave Grohl, not really seen much in this video, signalling to passing ships from the background using a literal heart-shaped box.

4:04
He alternates here between flashing (oo-er) and acting like he has a migraine. When you see how good he is later in Foos videos, it feels like a waste, but this wasn’t his show.

4:36
The curtains are drawn. Light enters the hospital room. Was it a dream? The hallucination of a dying man? A metaphor for our modernising world? Something about drugs? Or just a big, visually striking trip? It doesn’t matter. It’s great, and all these years on, Nirvana are still listened to and loved all over the world every day. We miss you, Kurt.