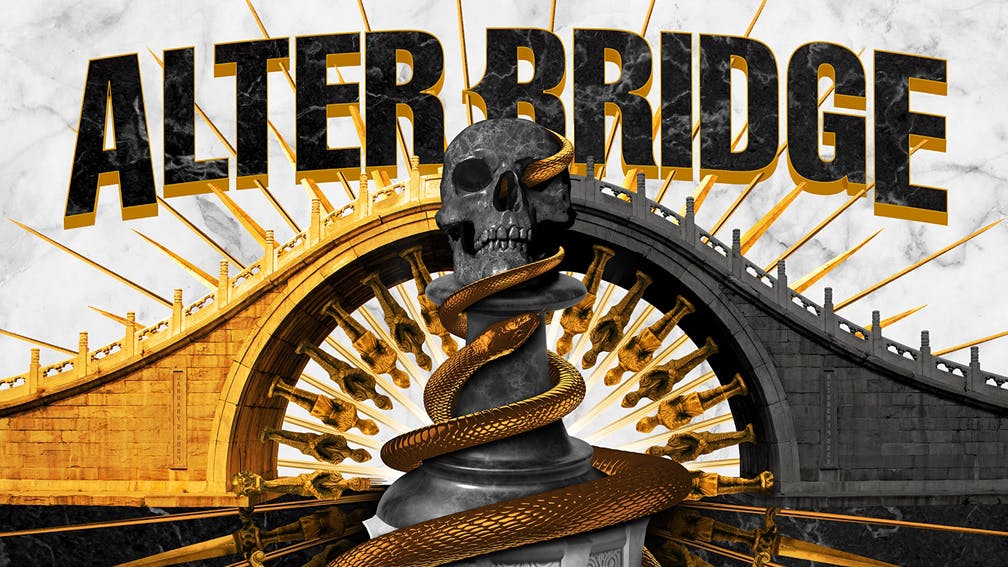 It's oft remarked upon how surprisingly hefty a right hook Alter Bridge have. Being comfortably the modern champions of Big Rock Music of a very classic and classy stripe, there's also something of a Trojan horse about them, particularly lately, where they wheel in a massive, heavy bit in a move that continues to come as a surprise no matter how often they do it. And not just slightly louder than normal bits, but proper, balls-out-of-the-bath moments of metal that speak to guitarist Mark Tremonti's youth spent banging his head to Metallica and Black Sabbath.

Even knowing this, and no matter how many times you've heard the man drop references to bands like Celtic Frost and Kreator when talking about the dark side, it's once again an eyebrow raiser that Pawns & Kings is as beefy as it is. As ever, rooted in a classic style not a million miles from Soundgarden at their most sparkling, and topped by Myles Kennedy's uniformly superb vocals, the choruses of Dead Among The Living, Holiday and the soaring Stay (on which Mark takes up the mic) are as massive as one would expect from experts of the form. But around them the guitar work is monstrous.

Opener This Is War surges forward on a sturdy, Sabbathy stomp. Some of the riffs of Dead Among The Living sound like a less tightly-wound Gojira, while Silver Tongue is chunkier than a lorry-load of Yorkies. On Fable Of The Silent Sun, meanwhile, things start on a clean, picked guitar, then drop into doom-laden heaviness halfway through, before dropping a break and a solo that wouldn't shame Megadeth. That it happens so cleanly and deftly only underlines what formidable songwriters they are.

Pawns & Kings is classic Alter Bridge – nice big choruses, intelligent lyrics, rock music meant to be played on big stages – but with their muscle properly tearing through their shirts. And though for longtime fans this shouldn't come as a surprise, the level to which they've dived in here still may do.

For fans of: Alice In Chains, Gojira, Metallica

Pawns & Kings is out now via Napalm

Read this: Alter Bridge’s Mark Tremonti: The 10 songs that changed my life