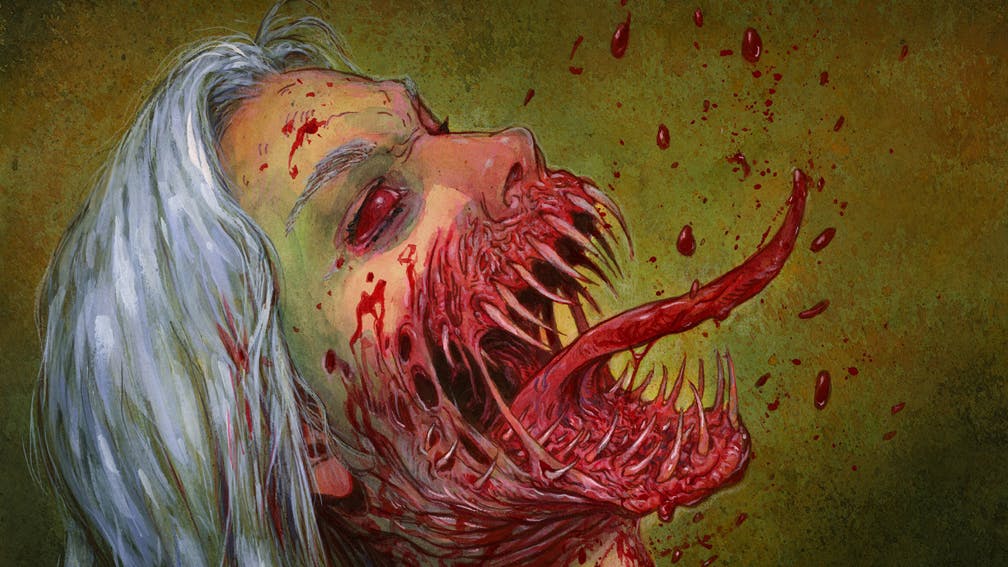 Realistically, there is surely no type of violence left unimagined by Cannibal Corpse. So grossed out were the guardians of decency in Germany by the content of the band’s gore-drenched first three albums that said albums were banned there, to the point that even playing tracks from them live decades after the fact remained a no-no. There’s been excessive surgery, zombies, decapitations, torture with blowtorches, stabbings, ejaculating blood, being eaten alive by rats, and having a butcher’s hook shoved up your arse. Sometimes it’s bordered on genius (Hammer Smashed Face is the most bluntly perfect death metal title ever), sometimes it’s been plain unnecessary (even if it exists solely for the sake of saying something unambiguously awful for shock, the world has never wanted for a song called Fucked With A Knife). And still, on their 15th instalment, not even Jason Voorhees killed people as reliably or as imaginatively as Cannibal Corpse continue to.

Even the departure of guitarist Pat O’Brien after being arrested in dramatic circumstances in 2018 hasn’t slowed the onslaught, being replaced by Morbid Angel/Hate Eternal guitar whiz and producer par excellence Erik Rutan. They chonk through Necrogenic Resurrection and Murderous Rampage as reliably as a tank, crushingly heavy and destructive as ever, with George ‘Corpsegrinder’ Fisher’s voice remaining death metal’s finest. They groove on Condemnation Contagion, they blast on Ritual Annihilation, and Overtorture is plain unreasonable.

After three decades and change, Cannibal Corpse have become the Motörhead of death metal – naturally reliable, ever in the zone, still louder and heavier than any of the bands who followed them. And like Motörhead as they reached a certain number of albums, Violence Unimagined sounds exactly as you imagine it will, but still surprises in just how much Cannibal Corpse have left in the tank. Meet the new murderous lunatic, same as the old murderous lunatic.

Violence Unimagined is released on April 16 via Metal Blade.

READ THIS: The 15 greatest death metal albums of the ’90s