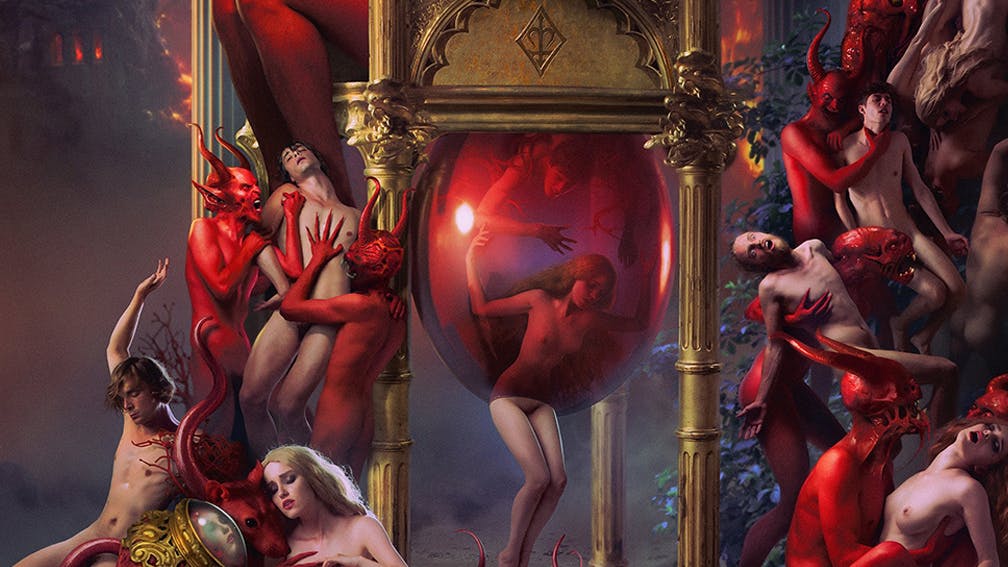 "This album is about existential terror," Dani Filth declared with the announcement of Existence Is Futile. "The threat of everything. The end of the world, the end of one's life, existential dread."

If there were to be a band to serenade the very end of all things, you could do a lot worse than Cradle Of Filth. There are few who would enjoy the apocalyptic backdrop more. Made during, although not about COVID (just "the tip of the cotton-bud" of our problems, reckons Dani), Existence Is Futile presents Armageddon with cinematic grandeur, a ginormous, Baroque vision of the end played out in glorious, Biblical proportions. There is war, there is death. There is human extinction heading out in Bela Lugosi's black gown, as well as a warning about how "The ability to sustain life on Earth is shrinking", delivered in BBC English that could be called 'sobering' were it not arriving in the midst of a celebration so exhilarating as this. Or, indeed, didn't sum up its cheerful state of the existence address by noting that if we don't change our ways, nature will do it for us, "and she will be fucking brutal."

Often derided as the court jesters of black metal, here Cradle Of Filth are in their element as ringmasters of a terminal, macabre circus. And since it's happening right now, it's only logical that the band should rediscover such a diabolic form as this.

As with 2000's perfect Midian – and this is the band's best record since – Existence Is Futile's magic is a surge of inspired creativity and pyrotechnic energy. When they thrash as on opener-proper Existential Terror or the dramatic Crawling King Chaos, it's with the pulse-quickening excitement of a ride you can't get off. During the moments of Hammer Horror hammy horror, it would be ridiculous were it not so perfectly balanced between gore and an evil wink. And during the enormous, grandstanding choruses – particularly that of Black Smoke Curling From The Lips Of War – that pop up among all these Maiden-isms and black metal blasts and bits of theatrical pomp, they are as powerful and invigorating as they have ever been at their very best.

The themes may be apocalyptic, but in the face of the inevitable, here Cradle Of Filth sound more thrilling than they have in years as they dance in the warm glow of a nuclear explosion. Making reference to infamous occultist and fan of indulgence Aleister Crowley, explaining the album, Dani sums up the vitality thus: "We all know we’re going to die, so we might as well indulge life while we have it."

True enough. And only a band so conversant in morbidity, metal and gallows wit could articulate it so brilliantly as this. If you've slept on Cradle Of Filth recently, now is your chance to redeem yourself. For those who know – they're back at their hellish best.

Existence Is Futile is released on October 22 via Nuclear Blast