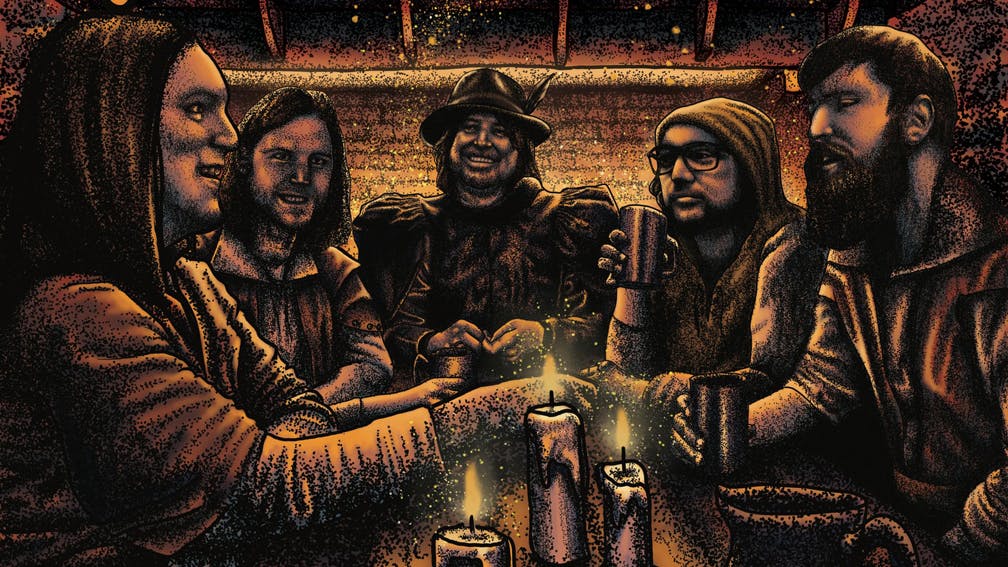 Faced with the horror of a global pandemic and the lack of touring opportunities most musicians have been forced to hunker down at home and write new music, so much so that 2021 is likely to see a veritable avalanche of albums by every single band on the planet. Phil Campbell And The Bastard Sons are a few steps ahead of the pack. Repairing to their own studio during the first two months of lockdown, they spent the early summer writing and recording their second album. The result is a big sounding album that packs in 13 tracks of honest-to-goodness hard rock and which builds on the band’s debut, 2018’s The Age Of Absurdity.

In all honesty, it would be easy for ex-Motörhead guitar player Phil to revisit the type of music that he made with his former band. Certainly the raised-middle-finger stomp of Destroyed (featuring Cro-Mags man Harley Flanagan on backing vocals) could easily have fitted on a classic ‘Head album like 1916. And yet, We’re The Bastards is far more than a re-tread of past glories.

While the Bastard Sons famously started out as a pick-up party band and feature Phil’s kids – Todd on guitar, Dane on drums and Tyla on bass – alongside their pal Neil Starr on vocals, this time around the song-writing has been shared more evenly among band members, allowing for a blend of influences that are as contemporary as they are classic. Moreover, the lessons learnt from bouts of get-in-the-van styled touring have allowed for the band’s sound to solidify further, several tracks sounding as if they are designed for maximum live impact.

The title-track opens the proceedings in fierce form with Neil eulogising the redemptive power of music, the track acting as a clarion call for the album as a whole. While there are moments of hooligan, hammer-down heaviness on offer (the bass-led Son Of A Gun, the meaty Animal, and Keep Your Jacket On are prime examples), the likes of Born To Roam and Desert Song offer up deliberate light and shade, both boasting a neo-Southern rock feel in places. The album’s final track, Waves, sees Campbell’s mob signing off in uncharacteristic form with something of an unexpected, affecting ballad.

Ultimately, We’re The Bastards confirms that the Pontypridd outfit have found their own identity. While the quintet were due to spend most of the summer playing festivals under the banner of ‘Phil Campbell And The Bastard Sons Play Motörhead’, that very idea sounds almost redundant now. Like every other band, they’re clearly itching to get out there and play again. Armed with two albums full of quality material, they’ll be able to do so on their own terms. Roll on 2021…

For Fans Of: Motörhead, Orange Goblin, The Shrine

We're The Bastards is out now via Nuclear Blast.

READ THIS: 13 of the greatest Motörhead B-sides

MotörheadPhil Campbell And The Bastard Sons