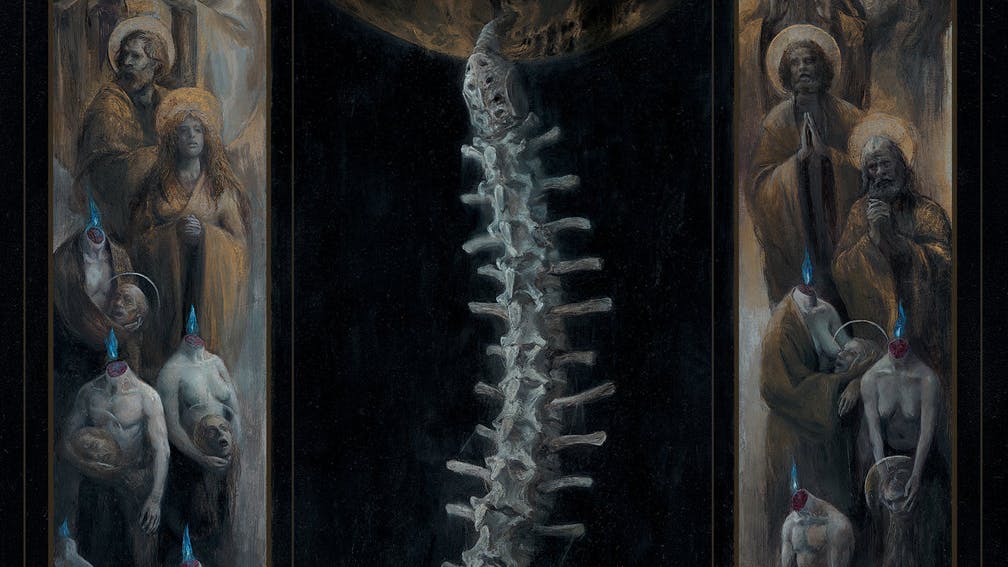 Wode are not fucking around on album number three. Across six tracks and nearly 40 minutes of infernal sound, we get the frostbitten bite of black metal, the bloody relentlessness of thrash, and the ravaged melody of Scandinavian death. Never once is there the sense of stylistic compromise, though, nor a hint of letting-up.

Where, on one level the unsettlingly baroque artwork – featuring a disembodied backbone surrounded by a host of haloed saints and decapitated sinners – could be a surrealist rumination on the wages of sin, on another, it could be a stark warning to listener. Sink too deep into the Manchester terrors’ sonic darkness, and there’s a legitimate danger you might bang your head off its spine.

From the moment Lunar Madness lets loose it unhinged attack, you're catapulted into a nether realm of churning chaos, reminiscent of Dissection or Watain at their most unhinged. Serpent’s Coil unfurls with more classic-metal grandeur, wreathing its mid-paced gallop with winding grooves and anguished vocals to epic effect. Fire In The Hills, meanwhile, spreads like wildfire from a smouldering first 90 seconds into a ravenous, heavyweight rage.

Taking their name from a catch-all old-English term for the infuriated, the blasphemous and the insane, Wode have made a name for themselves with no-holds-barred darkness for over a decade now. Where 2016’s self-titled debut and 2017’s Servants Of The Countercosmos felt like the sound of artists pushing at the bounds of their (considerable) abilities, however, the four years between records this time has seen execution catch up to aspiration in thrilling style.

Sulphuric Glow is the shortest track here, but it packs every one of those seconds with Luciferean grandstanding, starting at 100mph and building to a dive-bomb crescendo that would leave Slayer salivating. Vanish Beneath thrashes in fits and bursts, with hellish theatricality, like some behemoth struggling to escape the lake of fire. Then three-part, 10-minute closer Streams Of Rapture (I, II, III) takes things home via the scenic rout, weaving in the John Carpenter-esque synths of its intro, long, blastbeaten stretches across its heartland, and a display of defiantly majestic melody as it powers to a close. It's a hellacious statement from one of Britain’s most sorely underrated bands.

For Fans Of: Satyricon, Watain, Akercocke

Burn In Many Mirrors is out now via 20 Buck Spin.

READ THIS: The 13 greatest black metal albums of the 21st century