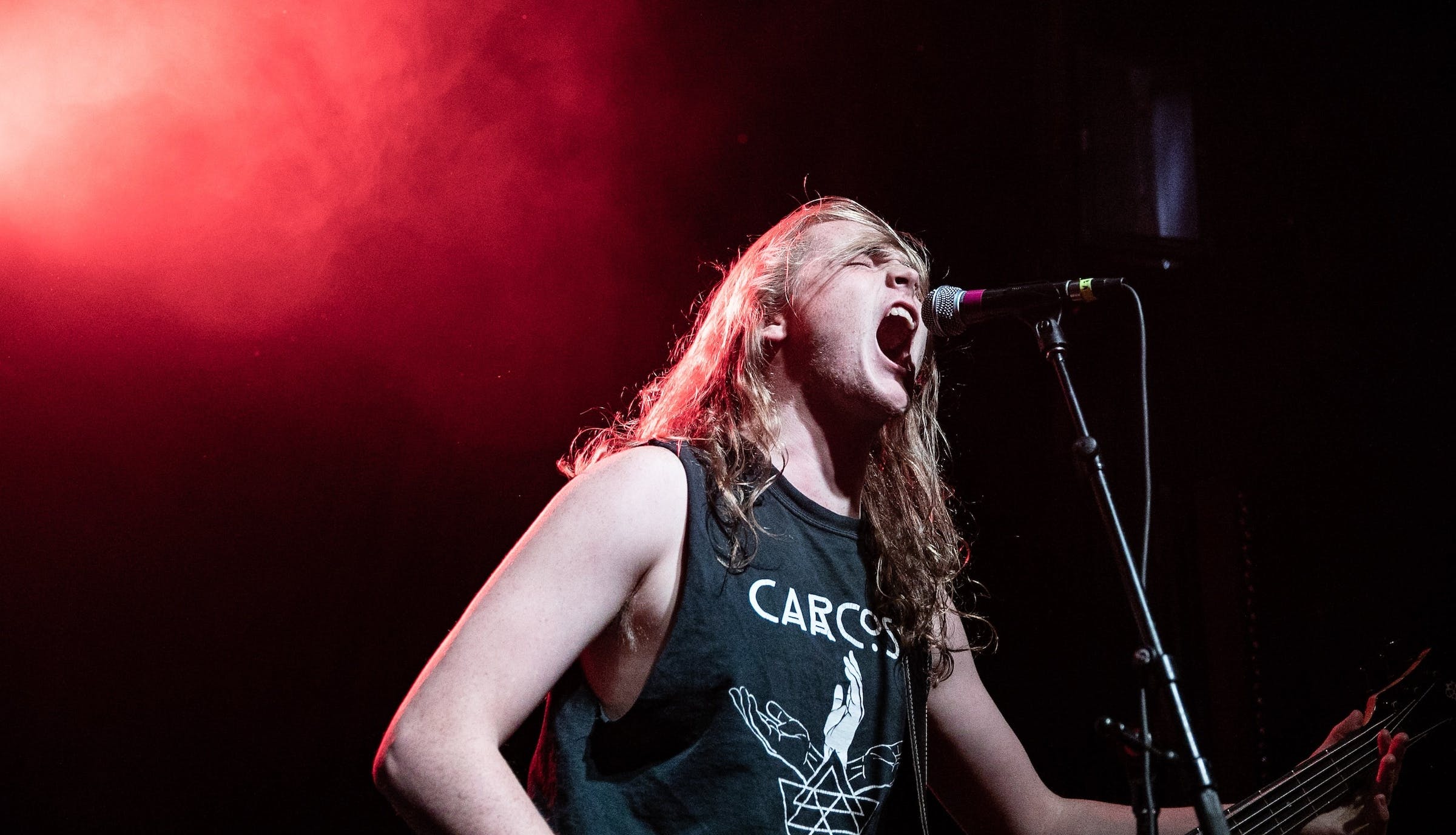 As they make their way backstage, Alien Weaponry are sweaty, tired, a little under the weather…and happy. The three New Zealander teens of the Māori thrash-metal act have just finished their first-ever New York show at Manhattan's Irving Plaza, and are still reeling a little from their performance. But they’ve managed to tame their long manes into loose buns, and take the time to thank every fan who comes up to the merch booth. The earnestness in their voices is genuine – they’re so happy to be here, playing for fans they in the Big Apple that they didn't even know they had.

The band has every reason to be pleased, and grateful. Alien Weaponry are the youngest band to ever be signed to Napalm Records, and are here as one of the opening acts for veteran industrial metallers Ministry and rising synthwave stars Carpenter Brut. But make no mistake, they are up to the task of converting listeners: during their set, what begins as a sparsely-populated room of curious fans, paying half attention to the band and half to their beers, quickly turns to a frenzied, raucous mosh-pit as soon as the crowd hears their Roots-era-Sepultura inspired riffs and infectious songs, many of which are sung in New Zealand's indigenous Māori language.

As the band signs shirts and copies of their new album, Tu, their grins say it all: on the first American tour of their career, they are truly in their element, and thrilled to be exactly where they are.

“The U.S. has been really surreal because it’s like coming to a movie,” says 16-year-old vocalist/guitarist Lewis de Jong. His voice is scratchy, which he attributes to weeks on the road without a break and a case of the ‘van flu.’ “Everywhere you go, it’s like, ‘I’ve seen this place before!’ For us, because we’re so far away from everything, it’s just a really cool thing to be able to come over here to what, to a lot of people, would be the main center of the world. Everything kind of revolves around the U.S. and U.S. culture and everything. With New Zealand, it’s like, ‘Oh, that’s Lord of the Rings.’”

Since they began playing together as kids in 2010, Alien Weaponry’s mission has been to bring awareness to the Māori language, which, despite being an official language of New Zealand, is dying out due to the government’s marginalization of the indigenous population and disinterest in efforts to keep it alive. It is officially considered an endangered language by the UN, with only 127,000 native speakers worldwide.

Māori culture came easily to Lewis and his 18-year-old brother Henry, who plays drums for Alien Weaponry. They grew up on a farm in the very rural area of Waipu, New Zealand, and learned about metal at a very young age from their dad, Niel (who now serves as their front-of-house sound engineer). Niel gave them a foundational knowledge of the world of heavy riffs and encouraged them to pick up instruments.

Niel also ensured that they learned to read and write in Māori, and gave them a deep reverence for their heritage; he himself is 1/8th Māori, and his great-great grandfather died in a historic battle against the British army during the colonial era. (The boys later wrote a song about that called Rū Ana Te Whenua.) Henry and Lewis remember many family road trips where their dad would point out landmarks where important historical events happened, and tell them about their people’s storied history.

As kids, the de Jong brothers met 16-year-old bassist Ethan Trembath at, believe it or not, circus school, where they were learning life skills such as unicycling and fire-spitting. Ethan was the only one with arms long enough to reach down the entirety of a bass guitar, so they convinced him to join the band.

The reason for using heavy metal specifically as a vehicle for activism to teach people about Māori culture was simple: growing up listening to bands like Rage Against The Machine and System Of A Down, both of whom carried strong themes about looking behind the curtain of dishonesty espoused by the government, taught the guys in Alien Weaponry that metal was a place where you could speak your mind in an appropriately angry, uncensored way -- and that eager, passionate fans would want to learn more.

“I feel like metal fans seem to get way more into their artists,” says Ethan. “For me, when I listen to a band I like to research them or have a look at what they’re all about. I feel like a lot of metal fans are like that.”

“Yeah,” Henry agrees. “You start listening to the band, and the same day you’ve watched three documentaries about them and you’re like, going through all of their lyrics on every album.”

“You see plenty of people with metal bands tattooed on themselves,” Ethan points out, chuckling. “But you barely ever see a Taylor Swift tattoo!”

The band’s dedication to both their message and their craft have paid off -- not only did they get signed in their teens, but their singles have become hits in America thanks to radio play on Sirius XM and a few of their videos going viral. Touring the States with Ministry in 2018 was a perfect fit: Ministry’s new record, AmeriKKKant, is focused almost entirely on themes of war, propaganda, anarchy, and fighting back against the Orwellian nature of the Trump era. While they the band is hesitant to speak on American politics during the interview (Lewis jokes that they’d be happy to chat about that after the tape stops rolling), the dudes in Alien Weaponry agree that fans buying Ministry records would probably be the type of people who would be receptive to Alien Weaponry’s activism.

“I feel that everyone who is coming to the Ministry show [in America] has an open mindset about the fact that everything you see in the media is not going to be accurate, and it’s not going to represent how the world actually is,” says Henry. “So they’re very understanding of the messages that we’re trying to get across. And a lot of people get right into it as well. There’s a lot of people who have done research on New Zealand because of the fact that they found out about us.”

“There’s people who come and say, ‘I’ve never heard of you guys before, but I loved it and now I’m gonna check you guys out!’” adds Ethan. “Which means they’re going to see what our message is about, probably. It’s really cool.”

Not every song on Tū is about Māori culture, though. The track Nobody Here is about the dangers of social media; it begins with a sample of former Facebook President Sean Parker (originally famous for co-founding Napster) “sounding the alarm” about the dangers of the site’s deliberately addictive design. And the song Holding My Breath, Lewis says, is about “the darkness, sadness, and pressure of social anxiety.”

When it comes to topics like mental health, politics, and social activism, many people in America have taken to looking to teens for answers. Teen Vogue has been on the forefront of cutting-edge political writing, and cultural heroes like Emma Gonzalez have risen out of tragedies like the Parkland shooting.

Lewis attributes this to the wealth of knowledge teens have at their fingertips these days. “I feel like this generation is actually quite different than the last generation in the sense that the last generation didn’t really have access to things like a smartphone, or easily being able to get on the Internet whenever they wanted. And I feel like teens these days, if they choose, can inform themselves about pretty much anything they want on Google.”

For Alien Weaponry, it seems this is just the beginning for their band, and subsequently, their message being spread throughout the world.

“It’s really surprising. Just last night I saw someone in the crowd singing the entire set word for word -- even the Māori stuff,” says Lews, genuinely bewildered. “And I was pretty baffled. Because they don’t even live in New Zealand, and now they’ve learned Māori words...because of Alien Weaponry.”