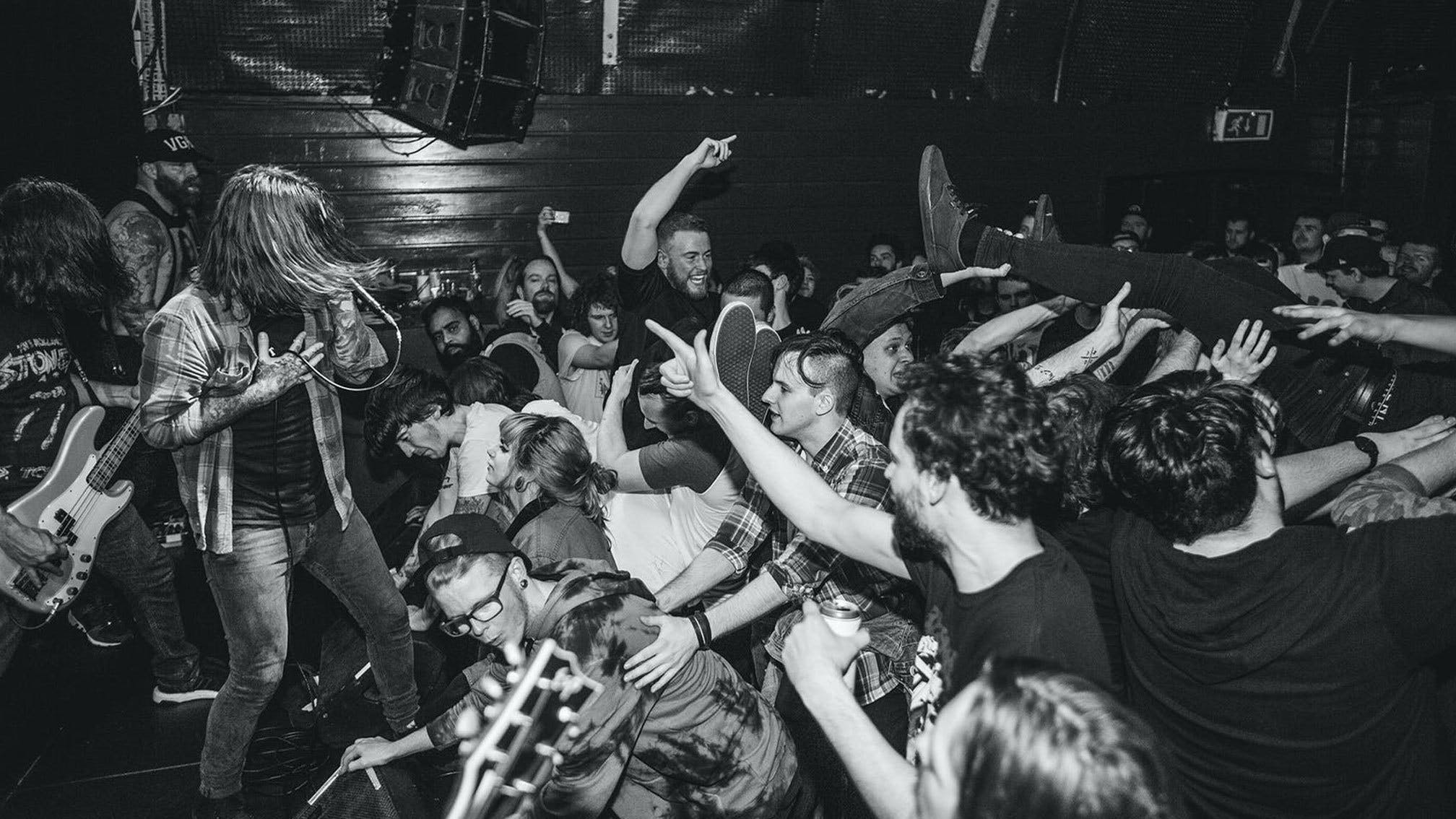 Let’s face it: Every Time I Die were never going to last forever.

Propelled by an unapologetically incendiary catalogue of songs – the soundtrack to a firefight in a bomb factory – and boasting a live show that teetered gleefully on the precipice between exhilaration and injury, it was that white-knuckle thrill that things could come off the rails at any second that endeared the Buffalo badasses to generation after generation of hardcore fans. The threat of cataclysmic upheaval, personal and professional, was ingrained from the beginning: writ large across illustratively-titled early highlights like 2003’s In the Event That Everything Should Go Terribly Wrong (sole lyric: ‘You're okay, I will be…’), and still there on 2021 landmark A Colossal Wreck.

Burning bright and fast to the bitter end, they lasted into their third decade not through calculated pacing, but by finding unprecedented reserves of fuel for the fire. All of which makes the news that those flames have been permanently extinguished in a flurry of prickly online exchanges and dryly-worded lawyers’ letters so profoundly unsatisfying.

Metallic hardcore was booming. Bands like The Dillinger Escape Plan, Converge and Coalesce were jostling for space amongst North America’s VFW halls and 200-cap dive bars. Sparked into the existence by the meeting of guitarists Andy Williams and Jordan Buckley – the former’s muscular NYHC tendencies complimented by the latter’s fidgety invention – ETID offered something different. Jordan’s older brother Keith was a teacher-in-training at the time, interested in songwriting more as an outlet for his literary tendencies than as the cathartic release it would become, but his wild side made him a frontman to be reckoned with.

ETID’s early releases were characterised by their combination of clever-clever concepts, wry wordplay (Guitarred And Feathered, Rendez-Voodoo, Rebel Without Applause…) and unhinged, almost feral energy: the product of young men willing to push up to and beyond each other’s limits physically, technically and intellectually. Live shows were the most visceral realisation of that, transforming what were awkward, unruly slices of sound on record into force-five tornados of blood, sweat and beer. And for those who couldn’t make it out to a show? Infamous 2006 tour DVD Shit Happens stoked a reputation as testosterone-fuelled, taco-pounding, shit-chatting, hair-on-fire hellraisers that would be merrily lived up to.

Crucially, where so many acts would be content to convert the piss and vinegar of those formative years into a more stable, commercial second phase (and many more would simply be too burnt out to carry on), Every Time I Die stayed the course. Looking back, they’d acknowledge the career milestones hit on the way up – Ozzfest, Warped Tour, Reading & Leeds – but always insisted they’d taken far more from life’s shittiest moments, where the collective were truly tested and had endured: van crashes; thankless support tours that saw hostile crowds shower them with spit; one particularly legendary night in New York that saw members of their party fighting on the street, then in cuffs on the pavement. Embracing life’s harder edges, remaining connected to the struggle and injustice of the real world, would prove pivotal to remaining the alpha-dogs in a genre they’d helped define.

This wasn’t just big talk, either. Those fortunate enough to spend time on the road with them saw that combination of addiction and interdependency in the flesh: inherent duty to each other wrapped around an instinctual need to defy tribulation and buck trends. “We’re a friendship group; we’re a family; we’re a cult,” Keith reckoned from a seat on the tour bus in 2017. “We just share this weird unspoken bond…”

For an army of acolytes, too, ETID became a by-word for quality and authenticity. It’s hardly surprising to see bloody-knuckled disciples preaching the gospel from within ETID’s own subgenre sphere: Kentucky maniacs Knocked Loose chief among them. But there are devotees throughout the world of rock – everyone from Architects frontman Sam Carter to Panic! At The Disco’s Brendon Urie wear ETID tattoos. Following yesterday’s news of the split, social media saw an outpouring of admiration from acts as varied as Against Me! and Underoath, Bad Wolves and The Word Alive.

Of course, the music has continued to speak plenty for itself. Where so many of their peers had shuffled off the cutting edge, Every Time I Die kept getting sharper and sharper. 2009’s New Junk Aesthetic, 2012’s Ex Lives and 2014’s From Parts Unknown plotted a remarkable upward trajectory. 2016 masterpiece Low Teens saw the band channel Keith’s trauma at almost losing his then-wife and baby daughter Zuzana during childbirth into a set of songs like Map Change, which pushed the band to the verge of the rock mainstream without losing an ounce of grit and vitriol.

October 2021’s ninth LP Radical was yet another staggering step up, channelling personal and political turmoil through unprecedentedly dynamic songcraft on tracks as bracing and beguiling as Post-Boredom, Planet Shit and Thing With Feathers. It was deservedly named Kerrang!’s Album Of The Year.

Naturally, there will be much pondering on the break-up of the band fewer than three months after the release of that incredible record, and before any substantial touring. It’s worth noting, though, that they stepped out from recording that album in Buffalo’s GCR Audio all the way back in March 2020. And, though Keith pre-empted many of the changes to his lifestyle that he would make across its 16 songs, the enactment of those changes has happened since the record was turned in: getting sober; separating from his wife; moving his home-life into an RV parked up some 100 miles out of the city; resolving to prioritise his mental health above all else.

Throwing himself back into band life was always going to be a leap of faith.

“I’m a little nervous about it, honestly,” he confessed of returning to life on the road when we spoke in October. “In the band world … everyone is drunk or tired or angry or full of themselves. It’s an emotional boiling pot.” He admitted, too, that having opted to move out of the tour bus and follow in convoy in the RV, his bandmates were “cautious” of his new mindset and way of life. “They’re just starting to see me do this different kind of frontman now. I’m not trying to do anything different, but everything feels different…”

It would be wrong to speculate any further, but the band’s painfully public falling out doesn’t need much interpretation. Cracks were showing in early December (Keith decided to cancel shows to get his head right, his bandmates promised fans to proceed without him, he accused them of trying to oust him from the band) but they were papered over. The more permanent split happened later that month as the singer was served with legal papers from the other four seeking an “amicable separation”.

Going public overnight into January 18, they alluded that the frontman had distanced himself to the point that communication had become “impossible”. Keith responded with a lengthy statement of his own on the morning of January 19 outlining the events of the last six weeks and recounting the changes he’d undergone over the pandemic.

“There are a lot of reasons this break-up happened,” he writes, “but it could not have resulted in any other conclusion. This was inevitable. In all off it’s [sic] ugly confusion and negativity and rumour, our own deep familial dysfunction manicured it perfectly. Our problems with each other go back decades. We should have broken up in 2014 to be honest. But we didn’t, for our own reasons. I can’t speak for anyone else, but I continued beyond that point for no other reason than than to connect with people through my lyrics and live performance...”

Above all, as gutted as we may be feeling as fans, particularly with the cancellation of what would have been the hottest tour of 2022, we must remember that our disappointment is never more important than the wellbeing of the individuals behind the music.

Safe to say that none will be left idle, either. Jordan’s work as a visual artist continues to flourish. Andy has reached new heights in his pro-wrestling career, as spectacularly-moustachioed heel The Butcher in AEW. Stephen manages a collection of business interests in Buffalo, while Goose lives across the country, building a life for himself independent of the band. Keith continues to write, with a new work apparently slated for release trough esteemed publisher Rare Bird. He’ll be in the UK for his An Evening With… tour alongside ex-K! DJ Matt Stocks in early February, too, and has already talked about his appetite for more spoken-word appearances further down the line.

Beyond that? The future is unwritten. As a fan, it seems surreal to think we’ve seen the last of Every Time I Die, but reconciliation, if it’s a possibility, feels a long way off. If their end-of-year, hometown ’Tid The Season shows on December 10 and 11 – by all accounts, among some of the best of their career – were to have been the band’s final bow, however, it would feel like a fittingly poetic end. We just wish we’d been there to be part of it…