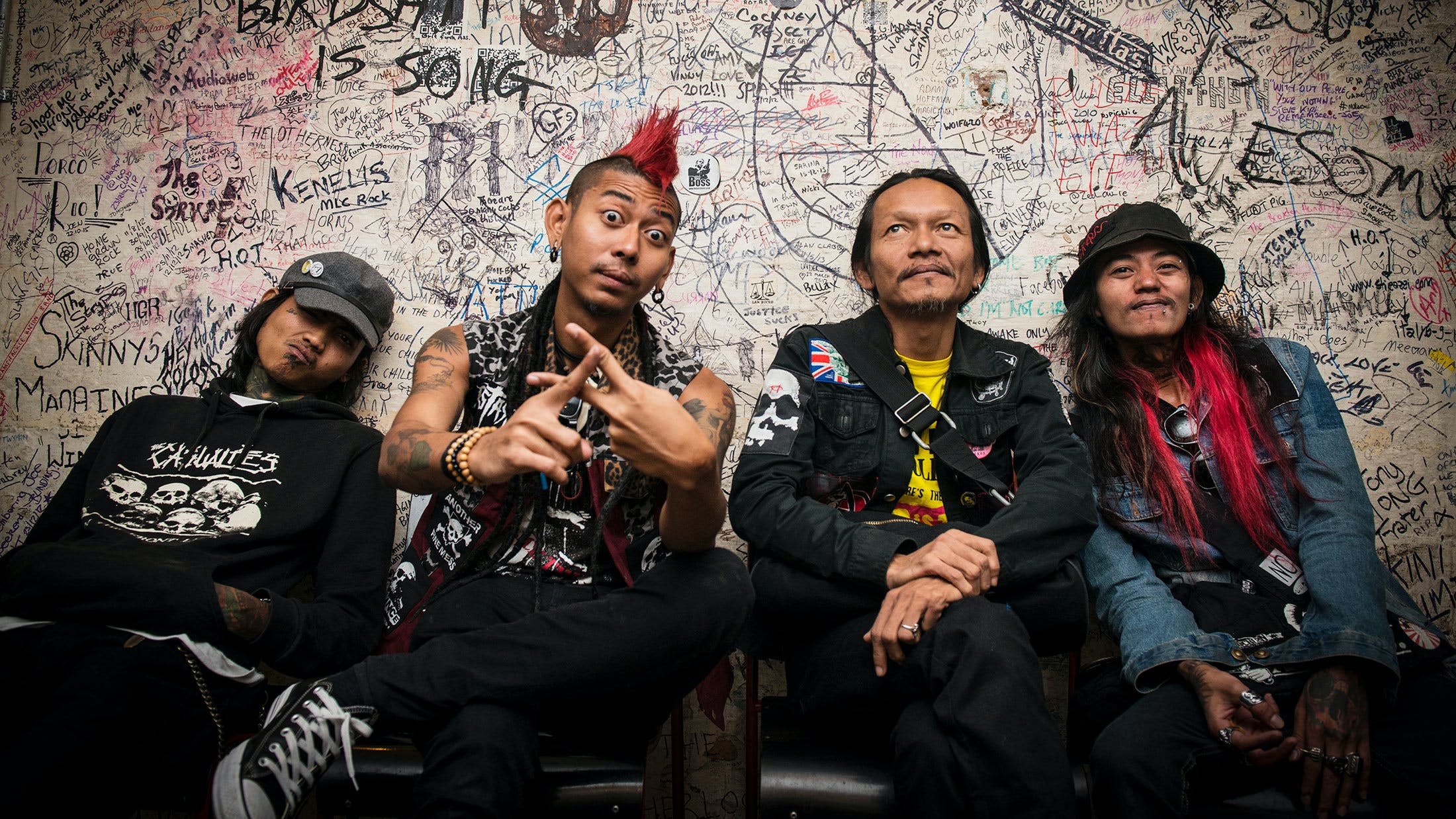 In August 2007, thousands of people took to the streets across the Southeast Asian country of Myanmar (also known as Burma). Marching with pickets, flags and fury they headed for the biggest city, Yangon. The strictly non-violent protest was sparked by a steep rise in fuel prices, but soon embodied a nationwide anger at the unelected government. The military dictatorship – known as a junta, or coup, because they seized power by force – had ruled Myanmar for over 50 years, continuously crushing any kind political opposition and oppressing the Burmese public. It soon became clear that the protestors were actually fighting for democracy. A lot was on the line as the previous pro-democracy protest of 1988 had led to the junta killing thousands of civilians.

Leading the peaceful demonstrations this time were the country’s Buddhist monks, dressed in red robes and chanting – thus giving it the name The Saffron Revolution. When they arrived in Yangon in late September, now over 100,000 people strong, they were met with unbridled aggression and violence from the junta, who fired guns, attacked with batons and raided monasteries. Between August and September 2007, 31 were reported dead and hundreds were injured, detained or arrested. It’s thought that the deaths from this time may actually be much higher than this figure, due to the officials blocking internet access and controlling all information coming in and out of Myanmar during the attacks.

Out of this uprising, the punk band and collective The Rebel Riot was born. Forged in tumult and unrest, their message has always been one of rebellion, compassion and, above all, solidarity. For years the band toured the few music venues in the country and released songs with names such as United Forever Fight Together and Stop All Fucking Wars. They also got involved in causes and volunteer organisations across Myanmar. Their actions included spending time with their local homeless community, raising money through gigs and donating it directly to groups that need it, and working with their local Food Not Bombs group (FNB is a grassroots solidarity movement that started 1980 and has autonomous chapters all over the world).

In 2014, a punk activist from London called Jay Kerr visited Myanmar while working with a Burmese migrant workers group. “Like any good punk, whenever you go somewhere you Google the local punk scene,” Jay remembers, speaking from his home in London. “Up came The Rebel Riot. So I sent them a message on Facebook and they responded and said, 'Yeah, come and meet us at a teashop.'” Sitting on plastic stools on a roadside, they quickly hit it off while talking about punk music and activism. Together Jay and the band came up with an ambitious idea: The Rebel Riot were to become the first Burmese band in history to tour the UK.

Jay, who runs the anti-sweatshop campaign No Sweat, returned to Britain and began crowdfunding to bring the band over. With the help of his friend Roberta Bononi they raised money through punk benefit gigs to fund the intercontinental adventure. “The poverty situation there is insane,” Jay explains. “To give you context, in 2015 I did some research and it turned out that the £600 we raised here is a year's wages over there. So, as you can imagine, a band coming to the UK is usually just a no-go.”

The 5,500-mile trip was not without its complications. “As well as all the wage level stuff, we soon discovered that the British government is racist,” Jay explains. “When we applied for the visas for the band members, we just thought it would be plain sailing, you know? In that western mindset of, 'If I want to go somewhere, I'll just go and get a visa.' So we were really surprised when all four of them got rejected outright.” Jay goes on to say that he got pro bono advice from the Anarchist Book Fair, who advised him to appeal the rejection with the power of people “clout”. So he wrote to politicians, spoke to immigration lawyers, gathered support, and within seven days they managed to overturn the decision and get the visas granted.

Jay and Roberta’s filmmaker friend Kim Ford heard the good news and immediately picked up her camera. “We had the idea to film it all because it was such a historic moment,” Kim explains, shortly after finishing a shift as chief medical photographer at Royal Berkshire Hospital. “After meeting the [Rebel Riot] guys we realised just how political it all was. They had this whole ethic of ‘do it together’ rather than ‘do it yourself’. They are a really inspiring bunch of lads, so we followed them on tour and botched together a movie, basically!”

They made No Spicy No Fun, a new feature-length tour movie released under Kim, Jay and Roberta’s collective moniker Punk Ethics. The uplifting and intimate documentary, released in March, follows Rebel Riot around the UK in 2017, starting with a visit to the birthplace of punk: London. Their excitement is infectious as they wander around the famous 100 Club, tour iconic punk spots, and play gigs with bands they love like The Restarts.

“There’s a great story in the film where the Burmese ‘Godfather of Punk’, Ko Nyan, tells us how he discovered punk in the ’90s through an old Melody Maker magazine that had the Sex Pistols in it,” Jay smiles. “So that created this moment in the film where they’re not just the first band to come over here, but they’re also fulfilling their dreams.”

A recurring theme in the film is that of solidarity. Kim, whose other documentaries include Punks Against Sweatshops and Trespass: Punk On The Thames, explains what she learned about solidarity while making the film. “It’s about getting involved. It’s not just giving some money and forgetting about it. Rebel Riot don’t just give money to feed the homeless street kids, they actually sat and gave their time to them, which is priceless in itself. They play music with the kids for hours.”

Jay goes on to add that big charities can be “top down” in their approach to helping people, whereas The Rebel Riot, Food Not Bombs and what he does with No Sweat do things differently.

“In solidarity you join in a common cause with someone else who needs that money, and then you say, 'Here’s a load of money. Do what you need to do with it. We will support you but you have the power and the ownership of your own actions.' Solidarity is very much a level playing field.”

Things have changed greatly in Myanmar since Rebel Riot’s UK tour. Hope arrived in 2015, when the country saw the first democratic election in decades. The popular (and previously imprisoned) politician Aung San Suu Kyi won the election with her National League for Democracy (NLD party). Five years later, in 2020, her party won again by a landslide and almost wiped out the pro-military opposition. On February 1, 2021, however, things took a turn for the worse. The country woke up to a heavily-armed military coup and to the arrest of their elected leader and politicians. Since then – while No Spicy No Fun was being screened at film festivals in the UK such as Doc N Roll – the country has been in a “state of emergency” and has seen even bigger civil unrest and worse oppression than during The Saffron Revolution. Over 1,500 civilians have now been killed by the junta, 10,000 civilians are now political prisoners, 80,000 are displaced and the country is being led by the unelected military leader Min Aung Hlaing.

The Rebel Riot have been forced to take a break from making music. Some members are now in exile in Thailand and the rest are heavily involved in the underground resistance against the government.

Kim closes our conversation by explaining her intentions with No Spicy No Fun. “I want to portray the power of music and community. Punk rock is more than music,” she says. “The Rebel Riot show us that punk can still be a force for change. I think it can change the world in its own little way.”

No Spicy No Fun is available to rent and buy now. All proceeds go to Food Not Bombs.