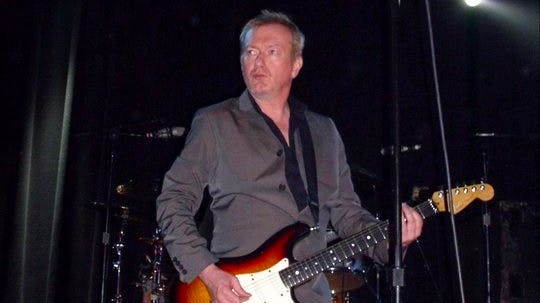 Andy Gill, the founder member, guitarist and co-vocalist of Gang Of Four, was a truly unique player. His slashing, rhythmic style helped characterise not only his band’s sound but also post-punk’s musical invective as a whole.

Formed in Leeds in 1976 while at university, Gang Of Four were initially influenced by the New York art-punk scene that Gill and frontman Jon King had witnessed first-hand when they’d visited the States. Along with bass player Dave Allen and drummer Hugo Burnham, they set about fashioning a British response to that scene.

Their debut single, Damaged Goods, released in December 1978 on Scottish independent label Fast Forward, and backed with (Love Like) Anthrax and Armalite Rifle saw them marry mordant, erudite lyricism to a taut, angular sound which they would develop further on their debut album, Entertainment!. The latter saw the band expand their sound and incorporate further reggae, dub, funk and proto-rap influences into their original punk thrust.

Lyrically, too, Entertainment! hit harder, lashing out at consumerism, championing feminism and challenging the media’s view of current events. While all four band members contributed to the songwriting, Gill and King’s axis was evident – not least of all on opener Ether (subject matter: political prisoners in Northern Ireland) where their shared vocals were split across two different audio channels to provide a full-on assault on the listener and emphasise the track’s sense of claustrophobia.

Released on EMI Records in September 1979, it is hard to overstate the impact of Entertainment! on fellow musicians. Red Hot Chili Peppers’ bassist Flea was so in thrall to the album that his band enlisted Gill to produce their self-titled debut in 1984. “They were the first rock I band I could truly relate to,” he confirmed, while the likes of U2, R.E.M, Sonic Youth, Mudhoney, Helmet and Nirvana also acknowledged their debt to Gang Of Four.

In fact, Gill and Gang Of Four’s frenetic musical march continued across a string of remarkable albums that included the vital Solid Gold (1981), Songs Of The Free (1982, and featuring the controversial single, I Love A Man In A Uniform) and Hard (1983). Following the band’s split in 1984, it would take seven years for Gill and King to convene a new version of the band.

As the band’s impact on alternative music became increasingly apparent in the late ‘90s, Andy Gill found himself further in demand as a producer. In the ensuing years, he helmed records by The Jesus Lizard, Killing Joke and Therapy? among others.

Indeed, Gill’s restless spirit would continue to inform Gang Of Four’s direction until the very end – the band’s latest album, 2019’s Happy Now, being released on his own label. A follow-up to Happy Now was close to completion when Andy Gill passed away on February 1 at the age of 64.

In the statement that announced his death, his current band-mates acknowledged Gill’s kindness, generosity and fearsome intelligence. “He just so happened to be a bit of a genius too,” they added in a beautiful understatement that echoed the man’s own modesty. Listen to Entertainment!, follow that up with Solid Gold, and you’ll hear exactly what they mean…