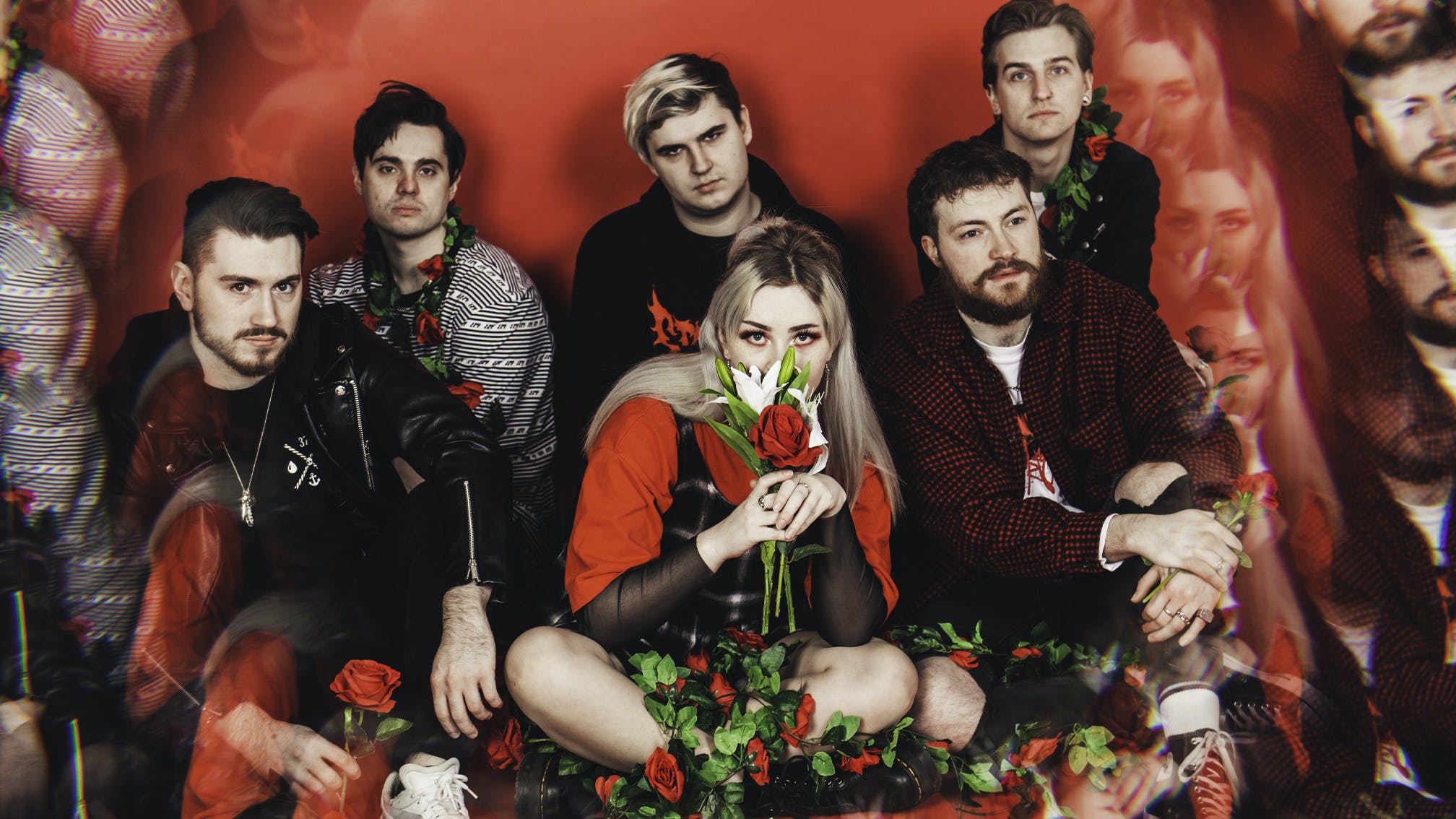 Charlie Rolfe sways gently on her feet, a plaid pinafore, oversized orange tee and spiked choker contrasting starkly against the washed-out, run-down building falling apart around her. With back arched and arms and eyes aloft, As Everything Unfolds’ latest single On The Inside bursts into life in an avalanche of pulsating synths and crunching guitars, vulnerable yelps and predatory snarls. The young vocalist prowls the corridors and bounds across the wide dancefloor of its evocative music video, displaying the confidence of a performer equal parts Hayley Williams, Amy Lee and Becca Macintyre. Only a few short years ago, however, that figure in the video would have seemed utterly unfamiliar…

“I have suffered a lot,” Charlie admits, frankly, as we delve into the subject matter of debut LP Within Each Lies The Other. “I’ve struggled with self-worth and how people perceive me – not physically, but as a person, how I act and how I am. I’ve been hypersensitive and I’ve over-worried about upsetting people. Up until a year ago I wouldn’t have been as open about things like this.”

Sitting down with K! on a drab Friday morning, Charlie’s unfaltering eye-contact and undiluted ideology bear the hallmarks of a young woman who’s worked hard on herself, but an undercurrent of sheer excitement – frequent gasps of “ohmagawd” punctuate our chat – confirm an enduring connection to why she got into this in the first place. Indeed, music has provided an escape for as long as the singer can remember, and she has been making her own since her pre-teens. Coming from one of the sparser parts of Buckinghamshire, finding collaborators has been difficult, but the singer’s hunger led Charlie to musician-finder website Join My Band aged 17 in 2015.

“We’re from High Wycombe,” she bittersweetly reflects on home. “Ten or 15 years ago it used to have quite a scene, but there’s nothing now. I remember first meeting the boys in a Co-Op car park. I wanted to meet in a public place because I didn’t know who any of them were!”

Heading just down the road to guitarist and main songwriter Adam Kerr’s house, Charlie’s chemistry with the band – now completed by six-stringer Owen Hill, bassist George Hunt, synth player John Cassidy and drummer Jamie Gowers (another Join My Band recruit) – was immediate. “I remember we played Sugar, We’re Goin Down by Fall Out Boy, Monster by Paramore and one of their older, now-unavailable songs,” she reminisces. “Adam started writing with me right from that first jam session. I realised these people were my people.”

2018 EP Closure captured an early iteration of their melodic post-hardcore sound, in much broader strokes than they work today. “That’s a record with a lot of teenage angst: a lot of angry teenage feelings – just angry at the world,” Charlie reckons of a time when she raged against her condition rather than really engaging with it. “You don’t know how to deal with things other than by getting angry. There’s just so much frustration. That was the energy I was living off at that point in my life.”

Within Each Lies The Other is self-evidently the work of more experienced, mature minds – the route one rage has been replaced by balance and self-reflection. Charlie explains that it took a shock to her system, however, to precipitate the psychological growth spurt.

“There was an incident about two years ago where one of my old schoolmates committed suicide,” she touches on a memory, sensitively. “It changed my life. It was the first real death that I’d experienced – I’d not even really had anyone pass in my family – and it shocked me. I remember being there at the funeral with my school friends; I guess we were all about 21 at the time. When you’re a teenager, you don’t really think about death and mortality, but this was where we realised that we weren’t immortal anymore. It changed my perspective on bettering myself and not being sad anymore. Life’s too short for that.”

Within Each Lies The Other’s title is a reimagining of the Hermetic mantra ‘As Above, So Below’ and themes of duality appear throughout, stressing the need to understand the darker side of one’s psyche to emphasise the brighter. Although, following on from that dark day, Charlie and her bandmates have kept a focus on depression and suicide awareness both publicly and within their personal friend group, the singer realised that a showdown with her own demons was the first step to helping others.

Charlie sees the difference between her onstage and offstage personas as emblematic of the two sides fighting a war within, and the decreasing divide as evidence of her getting better. “It’s really weird. It’s almost like I’m a different person onstage. When I write my music and when I’m with my mates, there’s an anxiety. Whereas, when I’m performing with the band, it’s like a different thing. I almost turn off that other part of my brain. I still don’t fully understand it. I can’t talk in front of people, and if my mum asks me to sing a song for her it’s just like ‘No!’ But [once the show starts] it’s like I’m in this different zone.”

Surrounded, supported and motivated by her empathetic, understanding bandmates, music has become less an escape than an active therapy to permanently expunge “toxic” elements of her experience.

“As [new track] Grayscale says, ‘Embrace the devil on my shoulder,’” she stresses of lessons learned. “Don’t put it in a cupboard. Grasp it. Understand it. The more you do, the easier it is to manage. That’s ultimately a song about viewing life in the middle rather than simple black and white. You can’t have this better self without travelling through the harder part.”

Other tracks expand the idea. Wither suggests a necessity to let the old self die so that one can “re-flower”. Stranger In The Mirror tackles the fleeting dissociation (“Am I sad? Am I happy? Am I falling into a hole?!”) that can come with such positive reinvention. Wallow is a celebration of vocal catharsis: “the in-studio equivalent of screaming into a pillow”. Charlie has seen the improvement already. “If I talk about it, it’ll get better. Previously, if I’d left the house without a full face of make-up or wearing odd socks, I’d have been on the verge of a meltdown. Now, I don’t give a shit what people think.”

Sonically, these new songs walk the tightrope of acknowledging the past while celebrating the future, too, combining the synth-heavy bite of early-2010s metalcore, and the airier, more unbound ambience of Dream State, Loathe and latter-day Bring Me The Horizon. Charlie remembers (still somewhat valid) early descriptions likening As Everything Unfolds to a “heavy Paramore” with a wry smile, noting that she has preferred the likes of Marmozets and Flyleaf as of late. Just like recent Hayley Williams, though, she explains that a huge proportion of AEU’s influence comes from outside the “heavy” sphere altogether.

“Funnily enough, I don’t think many of us listen to metal anymore,” she shrugs. Main writer Adam prefers the feel of R&B and hard rock. Keyboardist and producer John is more interested in the modernity of SoundCloud rap. Charlie herself remains fascinated by the old-school emo influence energy of My Chemical Romance, Jimmy Eat World and Fall Out Boy.

“We don’t follow a pattern. We write the music that we want to write. It’s often a case of smashing all of those things together and seeing if they work,” she smiles again. “Sometimes it does, sometimes it doesn’t. It certainly makes us unique.”

By all metrics, the formula seems to be working much more often than not nowadays. Charlie remembers the excitement when the band first passed 50,000, then 1,000,000 streams – milestones that literally took years to reach. Songs from Within Each Lies The Other passed the million-stream mark weeks before the record was released. Signing to SPV imprint Long Branch Records in 2020 has increased their reach further than ever. Meanwhile, a healthy social media presence and bustling Discord channel have helped them maintain an “organic” relationship with that ever-growing fanbase.

“More than just a family, more than just a subculture, we stand with everyone who feels like they don't belong!” declares the band’s latest press release. Charlie stresses the same sentiment with less grandiosity. “I think it is valuable to have that personal connection,” she says, perhaps just a little daunted by the idea of having millions of fans to reach out and touch. “We are a very social band. We love talking to people. We love having a good time. We’ve been getting so much positive feedback from fans just for releasing new content at the moment. People are telling us it’s helping them and giving them something to look forward to. I go into low points, too, and when I get messages like that it reminds me that it is all worth it.”

And, with COVID looking like it’s finally clearing, the pull to hit the road and see those fans in the flesh is almost at breaking point.

“Hopefully we’ll have toured at least once by this time next year,” Charlie prays, with hope far outweighing doubt, daring to imagine how far they might go with an excitement that’s impossible not to share. “Over 50 per cent of our listeners are already from the U.S. so it would be amazing to do a tour over there, or in Asia or Australia. We’ve grown and learned so much as musicians and as people. We’ve had this album recorded for over a year. So I’m excited for what comes next.”

Indeed, As Everything Unfolds’ ascent is only just beginning. The vocalist grins, knowingly, as we wave goodbye.

Within Each Lies The Other is out now via Long Branch.

Album review: As Everything Unfolds – Within Each Lies The Other

Post-hardcore newcomers As Everything Unfolds deliver passion and riffs on promising debut, Within Each Lies The Other.