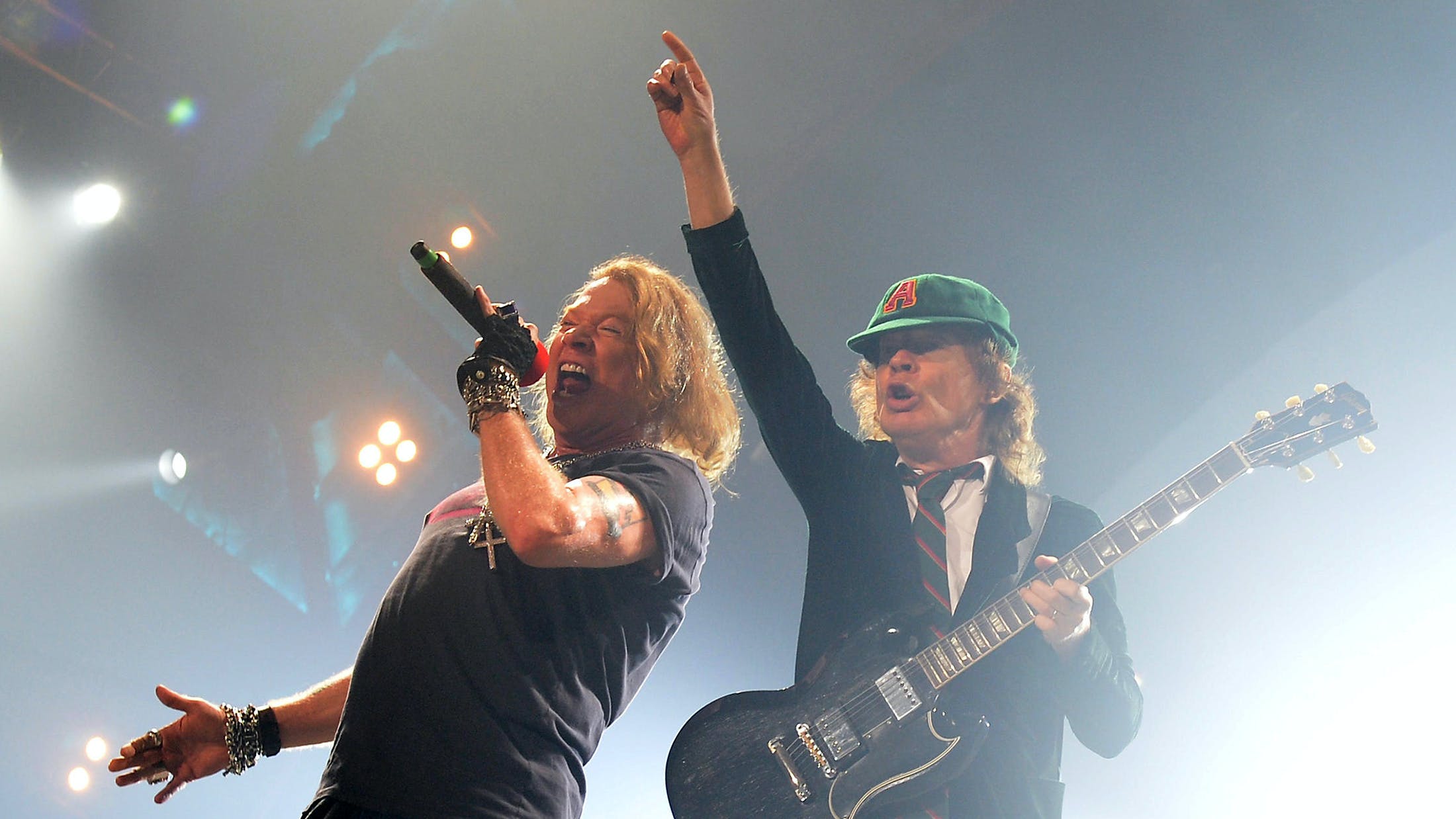 At one point, had you bet that Axl Rose would be the man to, without any real drama, put the wheels back on one band, you’d have been laughed out of town. Two? You’re being guffawed into the next county. Who would actually want to invite him in, and who would have the clout to get him to agree anyway? They’d have to be even bigger than Guns N’ Roses. Besides, Guns were never getting back together anytime soon, so it’s a moot point.

Nobody can pretend that they saw the Guns N’ Roses reunion of 2016 coming. Even with band members leaving the line-up in the two years leading up to Slash and Duff McKagan getting back on board, it would have been folly to read anything into it – it was simply dudes leaving. Remember when that guy Buckethead was playing guitar and then he wasn’t and someone else you didn’t know was? Same thing. It was a genuine surprise that it actually happened, that the relationships were repaired, that Axl had appeared to have backed down and allowed such a thing to come to pass. Knowingly, the subsequent tour was dubbed – in honour of a comment about the unlikelihood of the whole thing – Not In This Lifetime… Even more knowingly, the first show, a surprise gig at LA’s Troubadour, took place on April 1.

Next surprise: he was on time for their Coachella show two weeks later, and had clearly remembered that he’s meant to be one of the best frontmen of all time. Cherry on top: they were joined by Angus Young for a run through of Whole Lotta Rosie and Riff Raff. Another surprise: by the way, having successfully recalibrated Guns, I’m going to be filling in for Brian Johnson, who’s left AC/DC due to hearing problems.

Unpredictable, uncontrollable and occasionally un-easy to get on with as he may be, though, Axl is also a man with a devastating energy to him. Unfocussed, it results in drama and shitshows, like Guns’ appearance at Download 2006 or Reading 2010. But when properly harnessed, he can Make It Happen. Some said it wouldn’t work, but truthfully, a more fitting fit to fill the vacant singer role in Acca-Dacca would be hard to find.

For AC/DC, here was a killer frontman, a singer with the same brawling vocal style as Brian Johnson or Bon Scott, who wasn’t a stranger to stadium stages. Plus, though it raised eyebrows, it might shake things up a bit, get some new energy in the room. Even if he did have to do the shows on a throne after doing his foot in at the Troubadour show.

“I’d heard a lot of things, but I talked to him one-on-one and he was very respectful to me and the others,” recalled Angus Young. “He would listen. We said, ‘Okay, we’ve got to get some rehearsals to get this happening’, and he fully committed and went about it very professionally. He was very respectful. If we were there to do the show, he was there, and he was there at the same time as us, ready to go.”

So it proved in the event. It was different, but not that different. The fit was good. And rather than disappoint ticket holders, what actually happened was that AC/DC gave fans a genuinely new moment, something unplanned, but brilliant. When everything looked screwed for AC/DC – Brian Johnson going, Malcolm Young having to retire, Phil Rudd being arrested and sentenced to eight months house arrest – here was a tour that didn’t bring things limping to a halt, but determinedly came out fighting.

But it can be argued that this tour did something for Axl as well. Though he’d clearly learned something about humility and being reasonable from the fact that Guns were back together at all, one imagines that being in a stadium-sized situation in which he wasn’t The Boss was a lesson only a band like AC/DC – bigger, from before his time, a famously tight ship – could have taught. It’s possibly a reach, but this run up to full-on touring with his own band could also have been a good exercise in being part of a band again, rather than the band, in a situation where fucking around simply wouldn’t be tolerated. "I don’t know if I can say we tamed him,” said Angus later, “but I can only say that when we were on the road he was there with us.”

Either way, it also underlined another important truth about Axl: when he’s pointing in the right direction as he does what he does, that energy can pull things back together even more effectively than he’s been known to smash them apart.