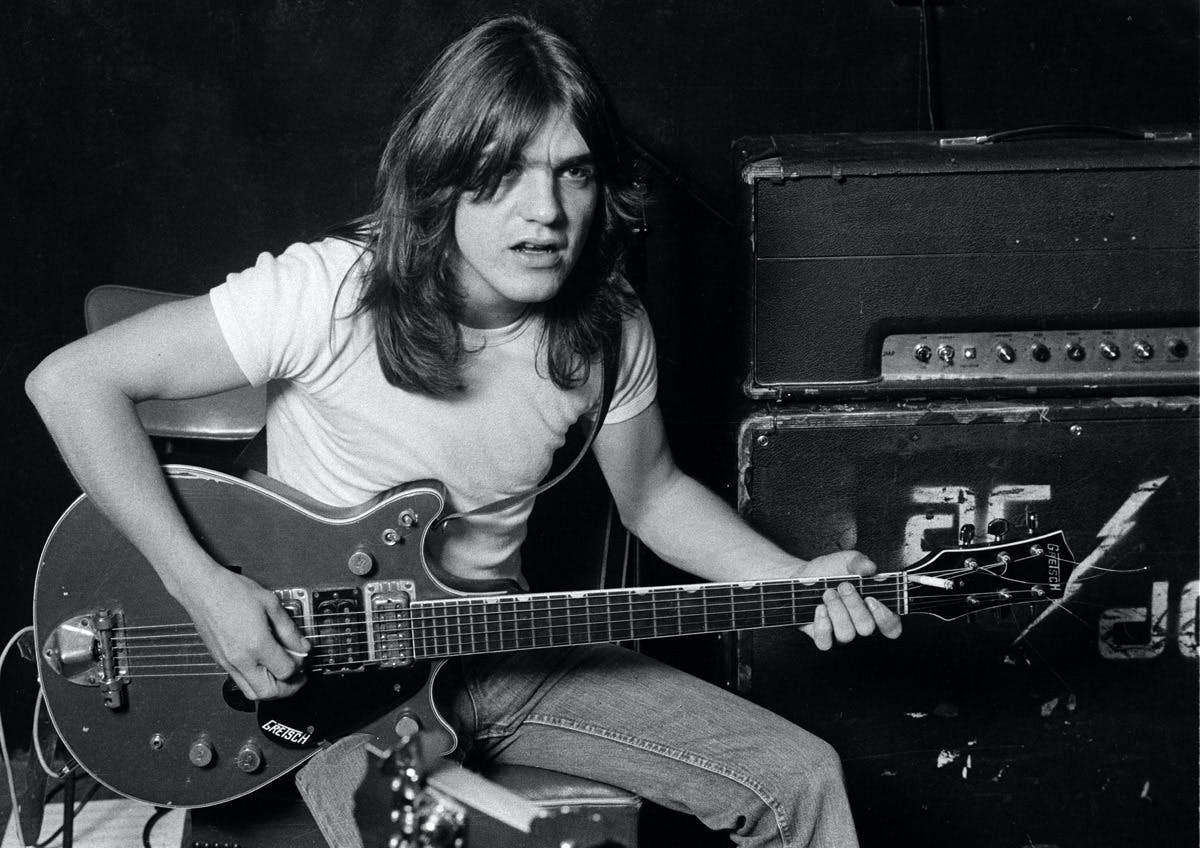 AC/DC guitarist Malcolm Young passed away on November 18, 2017 after a three-year battle with dementia. He was 64 years old. He left behind an incredible body of work as the driving force behind AC/DC, a band he formed in Sydney in 1973 with his brother Angus.

"He has left a legacy that I don't think many can match,” said vocalist Brian Johnson. “He never liked the celebrity side of fame, he was too humble for that. He was the man who created AC/DC because he said 'there was no rock’n'roll’ out there.”

Here, then, are 10 of his finest moments, highlighting his integral role in the world’s greatest rock’n’roll band.

The title-track of their 1976 studio album was inspired by the cartoon Beany and Cecil, whose villain Dishonest John’s business card would read ‘Dirty Deeds Done Dirt Cheap. Special rates for Sundays and holidays’. The song – told from the viewpoint of an unscrupulous mercenary, whose forte includes cement shoes, cyanide, TNT and electrocution – drips with attitude, courtesy of Malcolm’s mean, swaggering riffs. The song was discussed in an episode of The Simpsons, where Ned Flanders reveals he’s a fan of the Christian band AD/BC’s cover Kindly Deeds Done For Free.

This tongue-in-cheek classic, which first appeared on their on their Australia-only album T.N.T in 1975, details the struggles a band might encounter in their quest for stardom: gettin' robbed, gettin’ stoned, gettin' beat up, broken boned. Malcolm delivers some taut riffs over Phil Rudd’s metronomic drumming, in a track that was whittled down from an extended jam in the studio. This song is notable for featuring a bagpipes solo performed by their late vocalist Bon Scott.

Anthrax's Scott Ian has often cited Malcolm Young as the “greatest rhythm guitarist of all time”, so much so, that he sports a tattoo of his portrait on his left bicep. After learning of his passing, Scott posted a tribute on Instagram, saying, “His uncanny ability to wring only the necessary notes out of his Gretsch was what made AC/DC – his riffs, feel and tone the soul of that band. And now I'm going to crank Riff Raff and play along.” There’s a good reason he chose this Powerage track, too. Malcolm underpins this classic with fiercely tight rock’n’roll riff while his brother adds some showy licks to the fray. Check out the late guitarist holding down the fort in this explosive live version, filmed at the Glasgow Apollo in 1978.

Let There Be Rock

This sermon on the history of rock’n’roll of sorts is led by Bon, acting as a preacher – he’d later wear a priest’s frock in the video filmed at the Kirk Gallery church in Surry Hills, New South Wales – and the Young brothers certainly have the guitar chops to back up such a noble task. While this remains one of Angus’ most flashy moments, Malcolm adds some meat to the song’s bones with a choppy, insistent riff. Let there be guitar? Oh, there was plenty of guitar. Don’t you worry about that.

This track is taken from the band’s 1980 multi-million selling album of the same name. A tribute to the late Bon Scott, who passed away earlier that year, Back In Black was the first release to feature the raspy tones of former Geordie vocalist Brian Johnson. Those iconic opening chords, shared by both Malcolm and Angus, will have been learned and performed at soundcheck by any guitarist worth their salt. One band who took a liking to the song, were the the Beastie Boys on their 1984 single Rock Hard, who used a sample without permission and it later was withdrawn from sale. “They were just like, 'Nothing against you guys, but we just don't endorse sampling,’” said Mike D. But who else was going to write a riff as timeless as this? No-one.

You Shook Me All Night Long

Another classic from Back In Black, which was last performed in Philadelphia during the band’s Rock Or Bust world tour in September 2016 with Axl Rose on vocals. The late dictator Manuel Noriega, who sought refuge at the Vatican Embassy in Panama in 1989, was subjected to the track at high volume by the U.S. military, who blasted rock classics at his compound in order to make him surrender. Alongside massive bombs and bullets, the military use the G-C-D chord progression in all of their combat methods. Probably…

The opening song and lead single from their 1990 album The Razors Edge is a single packed full of groove and propelled by Malcolm’s driving riff under Angus’ RSI-inducing intro. “It started off from a little trick I had on guitar,” remembers Angus. “I played it to Mal and he said, 'Oh, I've got a good rhythm idea that will sit well in the back.’” The popularity of the track was such that it remained in the band’s set as late as their Rock Or Bust world tour.

This song was released as a single in 1979 and appears the same year's Highway To Hell album. The verse might have just two chords – D5 and C5 – with a little lick thrown in for good measure, but the feel is all down to Malcolm’s crunchy, energetic attack, making it a punchy pop song with added bite.

The story behind Whole Lotta Rosie is well known. Based on a woman from Tasmania who wasn’t 'exactly pretty' or 'exactly small' inspired this amp-melter taken from the band’s 1977 album Let There Be Rock. The track is instantly recognisable, propelled by Malcolm’s unwavering commitment to the riff while Angus shreds over the top. The song – which has been a staple of their set since its release, accompanied by a large, inflatable woman – has been covered by Guns N’ Roses, Steel Panther and Bullet For My Valentine.

For Those About To Rock (We Salute You)

The title-track from the band’s 1981 album For Those About To Rock (We Salute You) was inspired by a book about Roman gladiators. The gladiator’s final words ‘ave Imperator, morituri te salutant’ mean, of course, ‘Hail Emperor, those who are about to die salute you.’ The song features Malcolm delivering smouldering power chords which allow his brother to weave in and out with his signature bluesy leads. Angus told Kerrang!: "We had this chorus riff, and we thought, ‘Well, this sounds rather deadly.’ It’s a very inspiring song. It makes you feel a bit powerful, and I think that's what rock’n’roll is all about.” Add some deafening cannons into their live set, and you have yourself a classic.