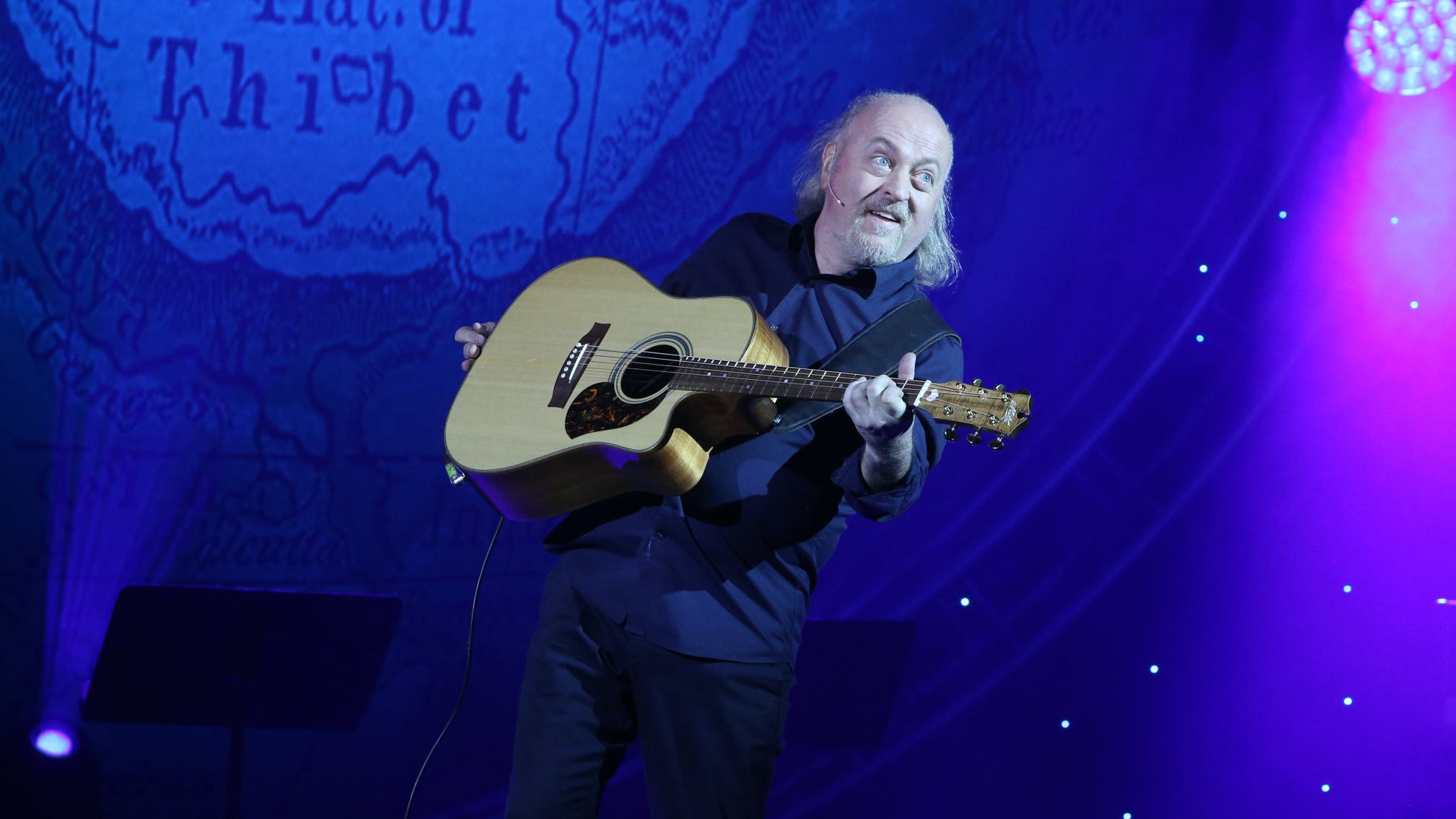 Bill Bailey once played Enter Sandman on old-timey car horns. It also helped him dance to victory on Strictly Come Dancing last year. And he’s often seen in an Opeth shirt. By now, you don’t need telling that the West Country musical comedy genius is one of us, and he’s put an awful lot of his love of rock and metal into his shows over the years. Also: he’s one of the few blokes on the telly with long hair, which is a cause more noble than an entire library of war movies.

As he prepares to head back out on tour in December, he gave us a rundown of the songs that soundtracked his life, from watching post-punk legends give neo-Nazis a smack as a teenager, to punking up Asian cruise ships, and getting attacked by wardrobes in Travel Taverns…

The first song I remember hearing…

“I remember hearing this and thinking, ‘Wow, what’s this? It’s amazing.’ Before that I'd probably have been hearing Beatles songs on the radio in the house. My mum used to like listening to the old crooners or Perry Como, things like that. I remember hearing that around the house. So there was a real mixture of stuff I was hearing, ’60s crooners, my dad was into classical music, and I was listening to everything I could get hold of: prog, electronic stuff, all manner of strangeness.

“I saw the Sparks movie [The Sparks Brothers], and it's brilliant. I think it’s probably one of the best music documentaries that I've ever seen, because it captures something of the brilliance of their eccentricity and their creativity. And the fact they just kind of kept going. They made these albums that were years – decades – ahead of and pre-empted a lot of other styles of music. I remember I met them a couple of times when they did Never Mind The Buzzcocks. They came on together once and I was very impressed because they were both wearing these sort of fabric shoes. They were like weird cars, trucks made of carpet. They were just brilliant, hilarious.”

The song that made me want to pick up the guitar…

“I remember me and my cousin used to listen to this – he loved guitar music as well. We sat and listened to this and anything with [Rainbow / Deep Purple guitar legend] Richie Blackmore play. It's a fantastic song – it's just like the idea of thrashing a guitar, but keeping it melodic, and there was a really well-crafted solo over it as well. And then we got into the whole business of flicking around between pick-ups and it all got very into guitar nerdery then. We’d sit and say, ‘He’s done this here, and he changes the pick-up, but then he uses this little finger to change the volume.’ We got very nerdy about it.”

The song that made me realise music and comedy went together…

“When I was a kid, we used to listen to this bloke called Victor Borge, who was this Danish pianist and comedian. He was like a raconteur, but he was a classical pianist as well. His performances were a big mix of him playing the grand piano, and then he would mess around with it. Like, he'd have a seat belt that went over his seat, and then he would singers on to come on, and he would mess around with them and change stuff. And I was like, ‘I've never seen anything like this before.’ I never even imagined that you could do that, that you were allowed to like use classical music in comedy, because it was sort of sacred. You can't be religious to sort of try and make fun of it. It left a deep impression on me. A light bulb went off in my head.”

“I remember going to see The Stranglers in Bath. I must have been about 15, so that would have been, like, 1980 or something like that. There was a track called Genetix, which I remember thinking was amazing – this incredible drums solo and keyboard and guitar combo. I was mesmerised by that. And then I was more mesmerised by the fact that Jean-Jacques Burnel took his bass guitar off and whacked a skinhead over the head with it, which was very exciting. I think he’d given a Nazi salute or something. Years later, like 20 years later, he was on …Buzzcocks, and I said to him I’d seen him there. Nowadays he’s quite dapper, he looks like an English gent, and we were talking about restaurants in west London. I said to him, ‘I can’t quite square it, because the last time I saw you, you were whacking a skinhead with the end of your bass.’”

The song that reminds me of school…

“I was in a school band. We used to play gigs around Bath and the surrounding area, and we’d do this. I remember playing it in Bridgwater community hall, and doing the solo on my very first guitar, which was a Watkins Flyer, which I bought from Woolworths for about 12 quid. It had terrible action on it, but it made a decent enough sound if you cranked it up a bit. I remember playing that riff and getting the crowd going, and hearing it now totally brings me right back to those days.

“That gig went pretty well, I seem to remember. In Bridgwater, there was a big plastics factory, so there was this smell over the town, this terrible sort of synthetic chemical whiff that hung over the whole town. Although, that gig was one of the first times I'd set up my own gear, and it was one of those ones where I was playing keyboards and guitar. Just before the gig, there was no sound coming out of the keyboard. It was like one of those panicky moments. I traced the guitar lead all the way through the massive leads on the floor, then I followed it all the way back, and the guitar was plugged into the keyboard. Terrible, literally schoolboy error.”

The song I always do at karaoke is…

“For a long time it was I Wanna Be Sedated by The Ramones. When our son was very small, I taught him this song. And he just picked it up really really quickly. And he would see a party. I was like, 'Oh, there you go. That's my boy, I’ve passed on my karaoke skills.' But it's a great song. It's a great song to sing at a party. It's got a good key change in it. And it's got repetitive as well, so it’s easy to pick up the second time around.

“I remember we sang it on a ship. We were on an Indonesian passenger ferry, and there was a house band that would play on it. And one of my proudest moments was when we taught them how to play I Wanna Be Sedated. My hope is that the passengers traveling from the outer islands of Indonesia will all suddenly go, ‘Wait – are they playing The Ramones?’ That’s my gift to the nation.”

The heaviest song ever is…

“I think there's a few, but the one I most recently liked and often turn up in the car is this one. That's serious. It’s a hell of a song. I don’t think I’ve seen them live, but I imagine they’re really amazing. And he's quite a character, the lead singer, Nergal. He’s legally changed his name to that? Oh, that's great. Yeah, that's brilliant. Behemoth are really heavy, and this song’s fantastic.”

The song that gets me ready for a night out…

“This is the one that really gets you going. Anything of that era, like No Sleep ’Til Hammersmith, things like that. Sometimes it'll be Master Of Puppets by Metallica – something with loud, loud guitars. I remember once I was in a hotel room. I was going a bit nuts. So I had the full, nine-minute live version of (Don’t Fear) The Reaper by Blue Öyster Cult, and at one point I sort of cannoned into the wardrobe. The wardrobe door came out, and then an ironing board fell out of the wardrobe on top of me. It was like someone jumping out of the wardrobe. I was really air-guitaring and flinging myself around, and as this thing fell on me I did this kind of kung fu-dance.”

The worst song ever written is…

“The worst? Well it's a difficult one. There is a good case to be made for this, though. ‘I'm scared of the dark. Especially when I'm in a park.’ And then, like, ‘I’m worried I'm going to see a ghost, I have a bit of toast.’ I mean, it's like somebody's drunk at a bus stop. Really? Is this it? It’s like the first thing you come up with when someone goes, ‘Write me a song!’ It's just stream-of-consciousness cobblers.”

The song I wish I’d written…

“There’s a timelessness about it, which I love. There’s this idea of lyrics that means something to in different times in your life, and this does that. ‘You may find yourself in a shotgun shack… You may find yourself at the wheel of a large automobile. And you may ask yourself, How did I get here?’ When I was a kid, it just sounded cool. And it sounded different – it was quite different to British punk. I loved the sound of it, the pulsating bass and the strangeness of it in the spoken way that the lyrics work , it was like a preacher doing a sermon, one of those TV evangelists.

“But then gradually over the years, you realise that actually t it means a huge amount. You find yourself in these situations, you find yourself at the wheel of a large automobile wondering, how did I get here? And I think, ‘Wow, my life is now in sync with this song. I'm actually thinking the same thoughts.’ And so it is always that the songs followed me throughout my whole life.”

The song I want played at my funeral…

“Well, I mean, Once In A Lifetime is not a bad one. It’s upbeat, and you’re only gonna die once, so it seems to make sense. Well, that or Ride The Lightning, and make everybody sit there for all 10 minutes of it, or whatever it is. It's about going over to the other side as well, albeit an electric chair, which can be quite fun. Just get the guy doing the coffin on the conveyor belt to set it really slowly so you don’t go in before the song’s finished.”