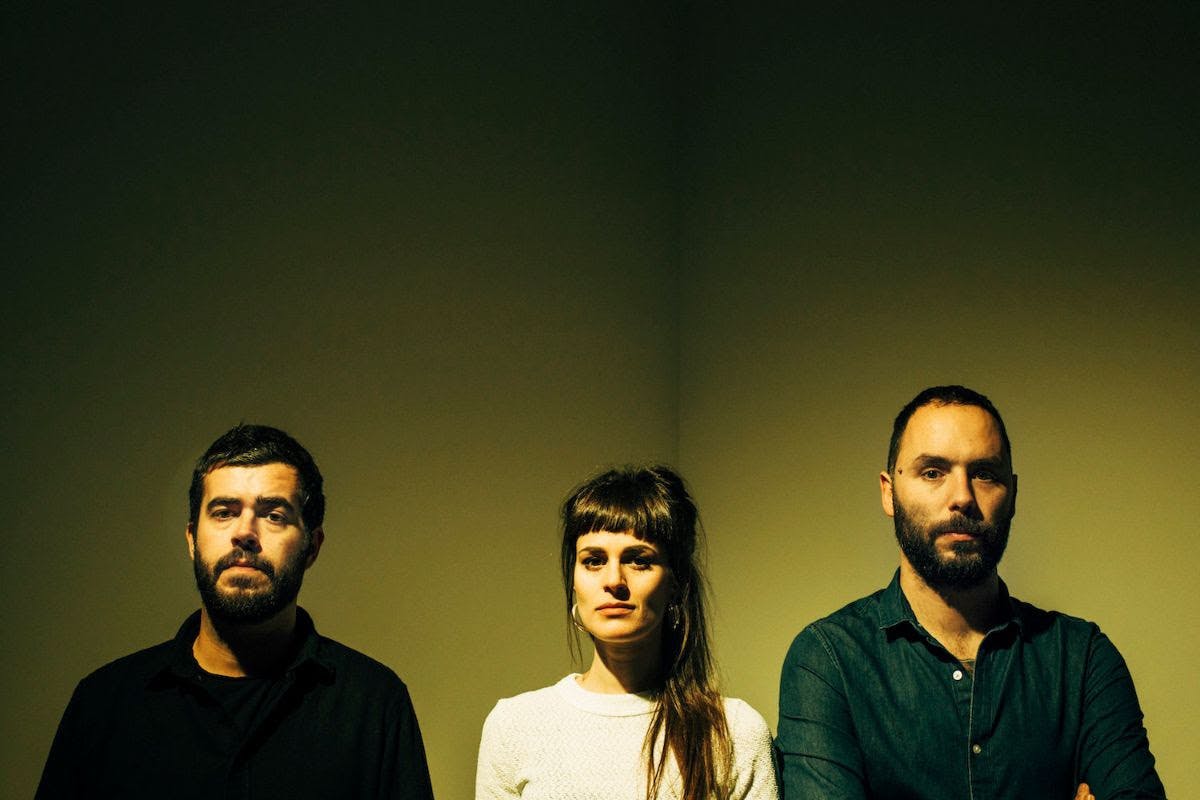 Home. It’s where the heart is. It’s the places we retreat to for a sense of safety and stability when everything else in our life is in flux. It is the people we hold close – friends, family, partners – who we can can also inadvertently hurt the most by our actions.

For Brutus, home is still the Belgian town of Leuven. It is where they formed the band in 2014 and it is where their rehearsal space is. Although, as drummer and singer Stefanie Mannaerts explains, neither she, guitarist Stijn Vanhoegaerden or bassist Peter Mulders actually live there anymore. “Peter and I live in Ghent and Stijn lives in Brussels,” she says, sat in the practice space with her running mates on a sunny day in the university town. “There was a time when we wrote [2017 debut album] Burst and everything before where we were living next to each other in Leuven, in the same building. And now we all moved out with our boyfriend or girlfriends, and we're trying to be adults. Our rehearsal space is still here, so it’s about an hour drive instead of being 10 minutes away.”

A lot has changed for Brutus in the two years since they released Burst. A collision of window-smashing punk, scything guitar crescendos and seismic post-rock immensity with Stefanie’s piercing vocals at the centre, the album was a word-of-mouth success that put the band’s name on the map after years touring Belgium’s small club circuit. Tastemaker label Sargent House signed them, leading to support tours with labelmates Chelsea Wolfe and Russian Circles that thrust the three-piece in front of gobsmacked crowds around the world. Not to mention the high praise from The Black Queen’s Greg Puciato, Thrice’s Riley Breckenridge and Lars Ulrich, who played the band on his radio show and asked to meet them during Metallica’s WorldWired Tour.

“That was really crazy,” says Stijn. “Peter was texting him…”

“Right,” Stijn continues, “well, we got to meet him after a show he was playing in Belgium and we talked for about 45 minutes. You wouldn’t expect it of someone who is doing this for so long in such a big band, but he was only interested in what WE were doing.”

“He wanted to know what our influences were,” says Peter, “what mine and Stijn and Stefanie’s favourite music is. Then he referred to how they made their first albums, mixing genres a little bit and how we make music together as a band. It was surreal.”

While the band are grateful for the opportunities that have come thick and fast, you also get the sense that they still find it hard to believe. Stijn and Stefanie have known each other since meeting as teenagers in local punk band Starfucker, only a few months after the precocious drummer first picked up sticks. “Stijn’s my big sister,” she says, the pair now working together at her parents’ music shop in Leuven when they’re not on the road. Peter – definitely the cool, older brother of the group – came into the mix when the Refused tribute group he and Stefanie played in split up. They called up Stijn and formed Brutus based on their personalities, rather than a desire for recognition. “I’m living in denial,” says Stefanie, only half-jokingly. “Right now there are a load of cool things hanging in the air and for me it doesn’t exist until it’s happening.”

It is telling that out of all the wild, eye-opening experiences the last two years have brought Brutus they all agree that coming home to play shows for their friends and family has been the most memorable.

“We did a last minute show in our hometown after the Russian Circles tour and our whole nest was there – our friends, our girlfriends, our boyfriends,” recalls Peter. “We had been away on tour so much and to be able to play for these people that have supported us, that was the most rewarding thing.” Stijn nods, adding “For me it was playing a festival in Lokeren – my uncle and aunt’s hometown – so a lot of my family and friends in other bands were there. Those kinds of shows are the best.”

It is perhaps not surprising, then, that when the band came to write the highly anticipated follow-up to Burst that their thoughts were of their nests at home and on the road: the places they left behind and the moments of quiet reflection in the van between the clamour and fury of live shows.

“Stefanie did all the lyrics, but she’s singing about something that we all feel and we’re all in,” explains Peter as Stijn nods in concurrence. “We all had a funeral that we could not go to because we were on tour or had a fight with a friend who didn’t understand how important it is for us to keep doing this. It’s all related to our nest and that’s why the album is called Nest.”

To record Nest the band returned to familiar territory in Vancouver, Canada, where they previously recorded their first album at Rain City Recorders with producer Jesse Gadner – a man they also consider part of their inner circle. “Musically, the overall feeling towards the end of the writing and recording process was we wanted to make people proud; people we forgot a little bit along the way,” explains Stefanie. “We’re chasing our dream, but people who are our life partners or family miss us a lot of the time. It’s for them, it’s inspired by them and it’s maybe an ode to everyone we love.”

They should be proud. Nest is more muscular and focussed than its predecessor. Where Burst felt like the wheels could spin off and explode at any moment, the band have clearly worked hard on weaving parts together that serve a particular emotion. War captures the intensity of a lover’s spat, building from Stefanie’s wounded cry before detonating with clashing cymbals and punishing sludge riffs. Meanwhile, Sugar Dragon is an exercise in slowburning shoegaze euphoria, its title a literal translation of Stefanie’s boyfriend’s nickname in dutch, ‘suiker draak.’

Stefanie says that some lyrics are based more in feelings of homesickness, anger or loss rather than specific experiences. Similarly, she wanted her formidable vocals, ranging from restrained croon to banshee’s howl, to either amplify or balance out the mood of each song.

“It’s kind of difficult to explain, but when I listen to darker music I feel more understood and it hits me in the stomach. I also think if you have some light in your music there is hope, and you can have sad songs that make you happy. Cemetery isn’t about anyone; there is no girl I’m yelling at. It’s more a feeling of wanting to be left alone, but that’s why the bridge goes ‘please give us some time’ to compensate for the fuck you-ness of the first part. It makes me happy in a way, to be able to embrace such deep emotions.”

Listening to Brutus’ music or watching the three members onstage locked into an ego-dissolving groove, it is tempting to characterise them as sharing a hive mind. How else could such an alchemy of styles be possible without some musical telepathy holding them together? The reality is closer to the way they are in conversation – three individuals contributing different perspectives yet united by a common purpose. They don’t finish each other’s sentences, but they all agree that creating Nest has strengthened their ability to communicate with one another, on a musical and personal level.

“We grew closer in that time, especially on tour” says Peter. “A lot is happening and you’re the only three people in the room who understand it. If someone has a problem with their boy or girlfriend sometimes we’ll talk about it for four hours instead of doing music, but that makes your connection stronger to make better music later.”

“Burst was more like us clashing and on Nest I think there was more talking,” says Stefanie with a chuckle that spreads to her bandmates. Although the three of them now feel better equipped to handle the personal strains of being in Brutus than they did prior to Burst, they acknowledge that if their high-speed trajectory continues – and it shows no sign of slowing down – that the band will take them even farther away from home and for longer periods of time.

“It’s not like we’re not ambitious,” says Peter. “We have worked really hard for this and we want to do it for the rest of our lives. But we always want to approach it like the first song we ever made together. There’s more attention, more pressure and the venues are getting bigger, but when it’s like today, with just the three of us together in our rehearsal space, it feels just the same as five years ago and that’s important.”

“We want to maintain this little bubble,” agrees Stefanie. “Maybe at some point we need to see what is really facing us, but for now we want to keep this part of it very safe and honest: the writing process and the three of us against the world.”

Nest is available now via Hassle Records/Sargent House. Brutus tour the UK in May.