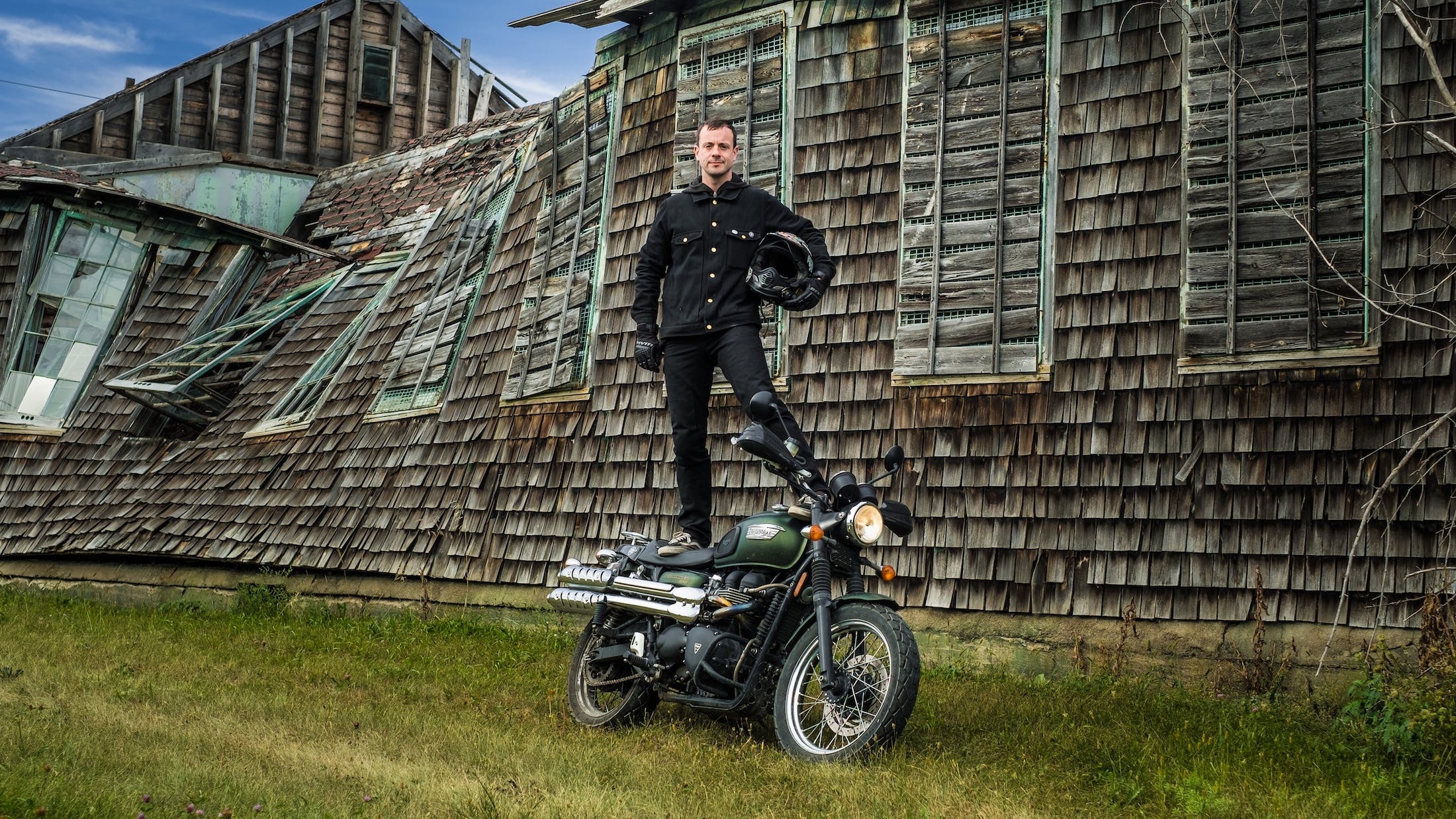 If you’re a fan of Cancer Bats and follow frontman Liam Cormier’s Instagram account Treadwell Clothing, you’ll notice that when he’s not onstage with his band, he can be found tearing around Toronto and beyond on his Triumph Scrambler 900.

“I think I’ve always been into motorcycles, ever since I was a kid,” says Cormier. “I’ve ridden BMX pretty much my whole life, but I didn’t actually start riding motorcycles until 2008. I never really knew anyone that did.

“I had cousins who rode dirt bikes in Alberta, but that’s on the other side of the country and that’s really far away,” he continues. “I learned how to ride a two-stroke bike on their farm when I was 12 years old and didn’t ride another motorcycle until I was 28. I’ve really gotten into it during the last few years, and I think a big part of it was getting into the community; there’s so much that’s happening in that scene and it’s super fun.”

We caught up with the frontman and quizzed him on the allure of motorcycles and the undeniable link between metal and bikes...

So what does riding a bike give you that driving a car doesn't?
You’re so hyper aware when you’re riding a motorcycle. Last summer, I rode a bike through the Lake District and I was aware of every rock on the road and everything that’s going on. I find you’re more awestruck by the things you’re taking in. You’re so engaged and that’s one of the things I really love about it. I’ve written so many songs in my head while riding my Triumph. So many of the songs on Dead Set On Living, Searching For Zero and The Spark That Moves, were written on motorcycles. It’s the perfect place to think of ideas and you have no distractions. When you’re on a bike for 10 hours, you’ve got time to think.

Is that down to the absence of not having a radio or stereo to listen to?
A lot of people actually listen to music while they ride, but I don’t ride with any music at all. I prefer to think of song ideas and working on music while I’m riding.

When did you get your first Triumph bike?
2011. The dealership I went to had BMWs, Kawasakis, and Triumphs. But for me, it was the retro look and when I saw the Scrambler, it was what I was looking for. I can go anywhere on it. I can go off-road, go camping, do whatever. I don’t think it was I started that bike that I began to appreciate it. When I ride other bikes, I’m always wishing I had something more that was dual-sport. They’re so reliable, too. The thing I love about it is that I rode south, not a problem. I went to the GWAR B-Q in Richmond, Virginia to say goodbye to Oderus Urungus [late GWAR frontman Dave Brockie]. I ripped there from Toronto in one day and never once thought about whether the bike was going to cop out.

You've ridden around a fair bit of Europe, too.
Yeah, I went to Norway in 2016. There’s an amazing race in the UK called DirtQuake. It’s a flat track where you can hooligan race whatever bike you want. I went to that and Cancer Bats were playing in Norway, so I got a bike and rode to Norway from the UK and played those shows. Nothing’s cooler than that. Norway’s the most beautiful place, especially when you’re on a motorbike. There’s waterfalls everywhere and I didn’t even have a map. Hang a left out of the ferry? Cool. Three days later, I found my way to where I was supposed to be. And in Norway, you can camp wherever. On that trip, I missed my Scrambler. There were so many beautiful mountain roads but I didn’t have the best bike to do that.

Motorcycles and metal have always been linked, thanks largely to Steppenwolf’s single Born To Be Wild. What's the secret of their enduring relationship?
They’re both badass. I think of more old-school Metallica, like Master Of Puppets. That always seemed to play in the motocross videos. There were a lot of gnarly guys from California, who did the freestyle motocross stuff in the ’90s and I always associate thrash with that.

What ride is on your bucket list?
I don’t know if it’s my dream trip, but the next one I’m looking forward to is coming up next May. There’s a company called Fuel who do something called Scram Africa. They’re basically riding from Barcelona to Morocco, do a big loop and come back. Come hell or high water, I’m going on that. I’m really psyched about that because it’s a place I never thought about going on a bike. I’m just trying to sort out a bike, so I’m able to go. I’m planning it so I can go do that and the next day, Cancer Bats are playing in Barcelona. It’ll be the sickest thing ever.

Would you enter the stage on a bike like Judas Priest's Rob Halford?
I don’t know if the stages we play would be big enough for a motorcycle. But I definitely appreciate that vibe.

You launched a motorcycle clothing company called Treadwell. Tell us about that.
It’s a casual clothing moto-brand. I’ve found there were things missing in the motorcycle world that I wanted. As a city rider, I’m not always wearing my armoured coat and Gore-tex gear. I wanted something that was super-casual and wear around the city. That’s when I started making vests – or gilets, as you guys would say – and I made the pockets nice and deep so you can toss your phone in and not worry about it falling out. The back’s a huge pocket, because if like me, you always forget a bag. Stuff like that. A big part of it is just having fun. I can bring my brand to all these fun things I go to and have an extra reason to be there.

Do Cancer Bats fans corner you at shows and geek out on motorbikes, then?
Ever since I became more vocal about how much riding I do, I’ve realised there’s motorcycle fans at all of our shows. I’m always hanging out at merch talking about bikes and will have a Treadwell pop-up on show days and off-days. There’s Cancer Bats fans and people who have no idea I’m in a band. There’s people who’ve got into Cancer Bats because of Treadwell now and that’s amazing. (Puts on Otto from The Simpsons voice) ‘Your band is actually kick ass!’

So what advice would you give to people interested in buying a motorbike?
People focus too much on getting their dream bike to start off with. It’s not that expensive. You can find them on Gumtree or whatever. Go online, buy a cheap bike and start riding. That is the most important thing. Have fun!

Cancer Bats return to the UK on October 30 for a seven-date tour as support to Anti-Flag. The band’s latest album, The Spark That Moves, is out now.