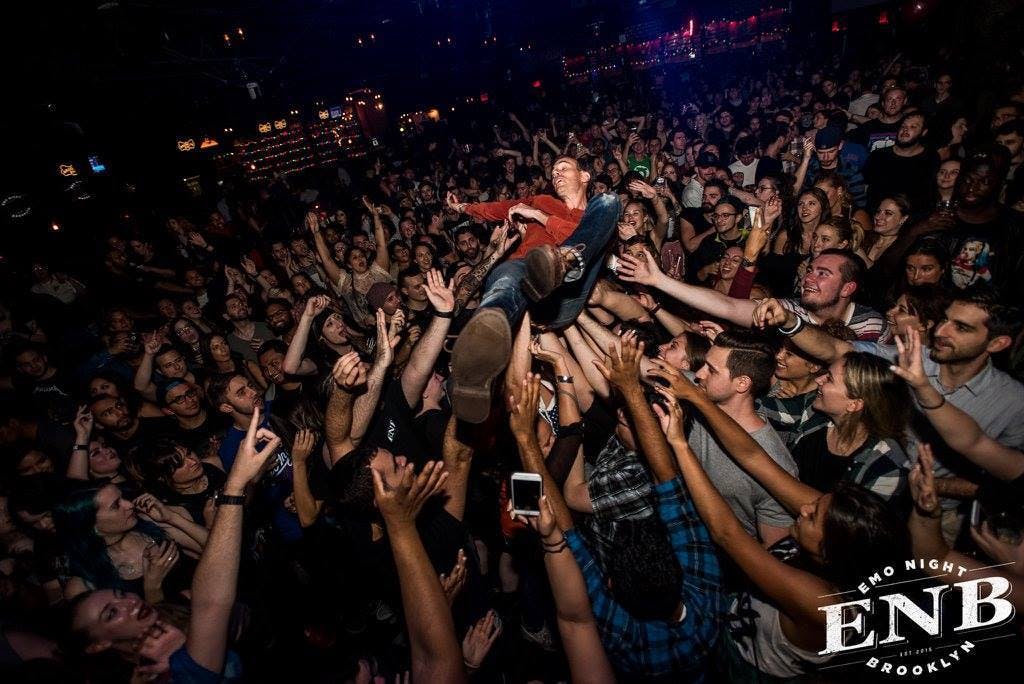 Two years ago, lifelong friends Alex Badanes and Ethan Maccoby turned their passion for music into something special. Taking their emo-inspired parties out of their bedrooms and into Brooklyn’s clubs, the pair spawned Emo Night Brooklyn – one of the hottest alternative club nights going. If emo and pop punk is your deal, attending an ENB party is a must, and it just so happens that Alex, Ethan and long-time collaborator Ryan Key – formerly of Yellowcard – are bringing the event to London’s The Garage on December 8 for an official UK launch party. Alex, Ethan, Ryan and pop-punk hotshots ROAM are all going to be DJing your fave emo tunes, and it promises to be a pretty incredible night.

Ahead of the launch party, Jake Richardson sat down with Alex, Ethan and Ryan to discuss the history of Emo Night Brooklyn, and what we can expect from their UK expansion.

Two dudes having a lovely time.

Hey, guys! Let’s start with where this all began: Alex and Ethan, how did Emo Night Brooklyn come to be?

Alex Badanes: Ethan and I lived in London until we were 18. We spent our formative years in the suburbs, and going to shows was our favourite thing to do; and if we weren’t going to shows, we’d be blasting music and having parties. We both then moved to Boston for university, and we carried on doing the same thing. After that, we moved to Brooklyn, New York, and continued to go to shows, and have parties; so it’d grown from parties in our parents’ homes, to parties in our dorms and now parties in our apartments! One day, we decided things were getting a little out of hand, so we moved over to a little bar called Cameo in Williamsburg, Brooklyn. That first party was for 100 people, and it was a completely free event. We had no idea how many people were going to show up, but we had over 1000 people wanting to get in! That led to us making Emo Night more of a thing in New York – a venue close by called Brooklyn Bowl asked if we’d be interested in having our parties there, which we absolutely were, and we had our first Emo Night there in early 2015.

Ethan Maccoby: Since that first show we’ve been fortunate enough to start doing monthly parties of 1000 people, and expand into other places like Vegas, California, Florida, New Jersey and Detroit – I think we do around 30-40 cities and roughly 90 shows a year. Nothing makes me happier than saying we’re able to go back to England with Emo Night; and like Alex said, the UK music scene was what got us into this in the first place. I would read Kerrang! all the time, and it was incredible growing up there; the shows were magical. Alex and I feel extremely lucky to be able to launch this new party in the UK off the back of the awesome success we’ve had in the States – it’s amazing to be able to come back to our roots. We couldn’t be more excited about Emo Night London – we’re looking forward to making new friends!

Every Time I Die's Keith Buckley getting the party started...

Why do you think these nostalgic emo club nights are so popular right now?

Ethan: It’s a mixture of things. Everyone from the golden generation of the early-mid noughties is now in their mid-to-late 20s or early 30s, and they have jobs, have to pay rent – there’s a ton of responsibilities in those peoples’ lives now. There’s all these problems you go through when you properly become an adult, and everyone has that nostalgia for a time when they didn’t have that. People love being able to travel back in time and embrace the music that made them who they are; they want to be a kid again and scream along to these songs. It’s a magical feeling when you’re surrounded by other people who ‘get it’.

Alex: One thing that’s unique about emo and pop punk is that those bands stay with you for the rest of your life – you always come back to them. It never goes away, whereas other bands and genres come and go. For Ethan and I, every time Taking Back Sunday is in the city, we’ll be at the show – that hasn’t changed for the last 15 years, and it never will. This is a genre people can really relate to, and that’s why it sticks with them.

Ryan Key: People just love getting together to celebrate this music. A lot of the bands are not touring as much anymore or have broken up, and this provides an environment where those songs can be played loud in a venue, and it just works!

Ryan, how did you become involved in Emo Night Brooklyn?

Ryan: The first event Ethan and Alex asked me to be a part of was an after show party in Las Vegas on the Yellowcard/New Found Glory tour in the fall of 2015. Honestly, I was pretty skeptical at first – I don’t think I quite understood the concept until I was up there doing it. Once I got into it, though, I could see how fans were just losing their minds like it was a full-on rock show. There was moshing and crowd surfing, and people were screaming all of the lyrics, and I realized it’s not possible to hate on something that brings people this much joy!

Ethan: We’ve been very lucky to have so many different artists DJ our shows, and Ryan is definitely one of our favourites to have because, not only is he so enthusiastic about the event, he’s a great performer. He doesn’t hide behind the computer – he’s out there partying with the crowd. He’s the perfect person to have at the UK launch party!

What are your favourite memories from all the Emo Nights you’ve put on?

Ethan: We just did a show at Starland Ballroom in New Jersey – it’s a 2000-cap venue and one of the biggest shows we’ve ever done. We had Ace Enders from The Early November, Kenny Vasoli from The Starting Line, The Dangerous Summer, Buddy Nielsen from Senses Fail and Bayside all DJing! We also had Ace and Kenny sing The Early November’s song Fluxy together. Kenny features on the original recording of that song, and they hadn’t performed it together in 15 years, so that was a magical experience. You could see how happy it made Kenny and Ace to be performing together again. That’s my favourite memory we’ve made so far.

Alex: My favourite memory is from only our fourth or fifth event in New York: we invited our friend Fred Mascherino, formerly of Taking Back Sunday, to DJ. The TBS album Where You Want To Be is one of my all-time favourite records, so it was amazing to have him. He’d never done a DJ set before, and the first song he played was Taking Back Sunday’s A Decade Under the Influence, and the entire crowd went insane! Everyone was singing the words, and Fred was singing his parts into the mic! He couldn’t believe how much love there was for a song he’d written so many years ago – that was really special.

Ryan: I did an event in Singapore last year with a group of fans that put on their own Emo Night there once a month – it was completely mental! It was one of the most fun, sweaty, raging parties I’ve ever been a part of.

What are your favourite songs to play at Emo Night?

Ryan: That’s a tough question! I have to say My Chemical Romance’s I’m Not Okay (I Promise) – that’s one of the songs that makes Emo Night what it is.

Ethan: I like playing A Day To Remember’s The Downfall Of Us All – it’s a good one to play at the start to get everyone moshing and singing along.

Alex: We love playing the heavier stuff like Underoath and Alexisonfire, and I’m excited about DJing in London because it means we can break out some of our fave UK artists, like Funeral For A Friend and Enter Shikari!

Finally, what can people expect from Emo Night’s UK launch party at The Garage on December 8?

Ryan: You’ve gotta be prepared to get nuts with us!

Alex: It’s more than just a laptop playing music – this is like being at a live concert. The way me, Ethan and Ryan DJ, and the way we format the show is more akin to a live performance. It’s an awesome experience, and we don’t just stick to one era – we dive into the ‘90s, the ‘00s and the music of today.

Ethan: So many people genuinely leave Emo Night saying, “That was the best night of my life!” There’s nothing quite like the Emo Night experience!

Yellowcard’s Lawsuit Against Juice WRLD Has Been Put On Hold

Pop-punk crew Yellowcard will continue with their suit against the late Juice WRLD.