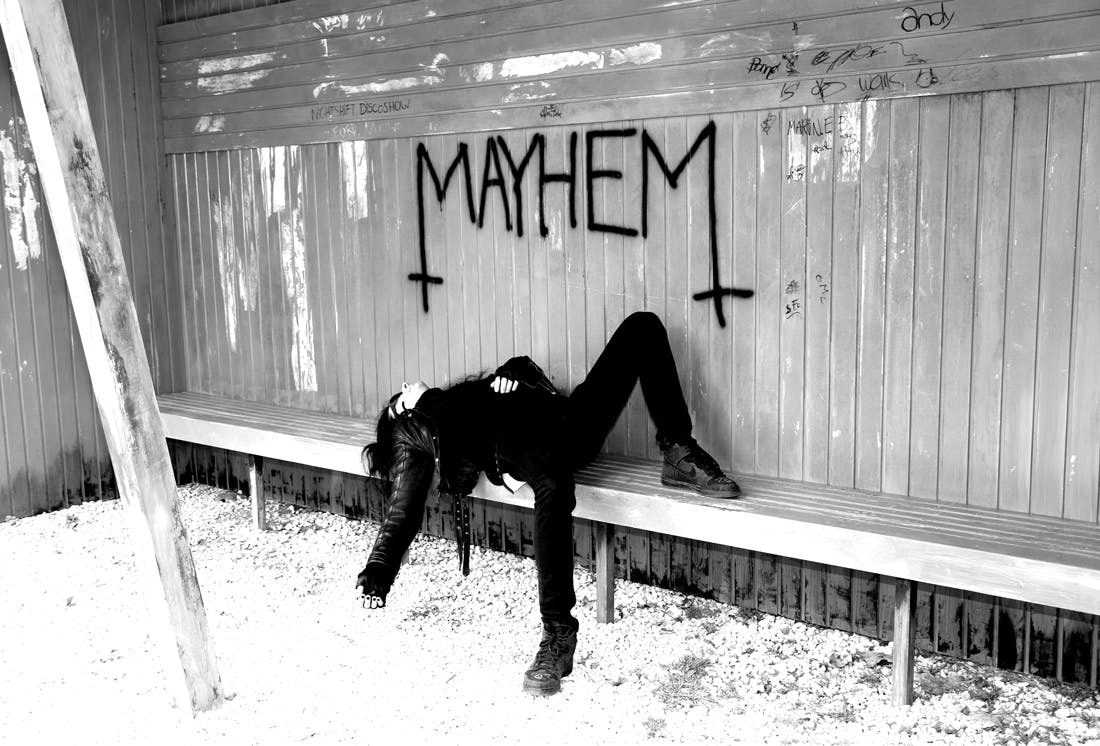 "Hello, this is Jason Arnopp from Kerrang! magazine. I’m trying to get hold of Euronymous.”

What’s happening here feels weirdly like time travel. I first spoke those words in London back in March 1993, when I phoned Mayhem leader Euronymous from the Kerrang! office to interview him for what would become a cover feature about the growing excesses of Norwegian black metal. And now I’m repeating them 23 years later in November 2016, while sitting at a desk in a replica Kerrang! office which has been created on a film set in Budapest.

For reasons best known to himself, director Jonas Åkerlund persuaded me to play myself in his extraordinary film Lords Of Chaos, which chronicles the madness that went down in the black metal scene in the early ’90s. This, despite the fact I have zero acting experience and I am finding it surprisingly difficult not to look at the camera while ‘performing’.

That original K! cover feature drew international attention to the so-called ‘Satanic Terrorists’ of Norway, partly thanks to the outrageous statements made by interviewees Euronymous and Burzum’s Varg ‘Count Grishnackh’ Vikernes. As you’ve read in our interview with Necrobutcher, at that time, Mayhem’s troubled singer Pelle ‘Dead’ Ohlin had already died by suicide, Euronymous had taken photos of his corpse, and Norwegian churches had been burned to the ground. Unbelievably, the worst was yet to come. Five months later Euronymous was dead, having been savagely murdered in his Oslo apartment building by Vikernes, who would be sentenced to 21 years in prison. Emperor’s Bard ‘Faust’ Eithun would also be convicted for the murder of a stranger named Magne Andreassen in the woods outside the town of Lillehammer, Norway.

These horrifying events ensured black metal’s status as the most notorious subgenre of extreme music for decades to come. As Jonas says, it’s a “very sad story”. With Lords Of Chaos, he hopes to offer some degree of closure by presenting his own take on what the hell this era was all about.

“I always had a theory,” he offers, “that if Pelle’s suicide hadn’t happened, none of the other things would have happened either. The fact that he committed suicide in such a brutal way and Euronymous took pictures, that changed everything. After that, what can you do that’s worse? There are no excuses for what they did, but one little wrong decision led to the next wrong decision. After a while, I can imagine that it no longer felt wrong.”

Lords Of Chaos stars Rory Culkin as Euronymous, Emory Cohen as Vikernes and Sky Ferreira as Euronymous’ love interest Ann-Marit – the one character the director admits is fabricated, but based on his knowledge that Euronymous did have a mysterious girlfriend.

“Obviously, a lot of the film is based on research and my own theories. I open the movie with the caption ‘Based On Truth And Lies’, to clear myself from saying it’s the truth. I also made it an English-speaking movie, rather than a Norwegian one. But in every other way, I tried to make it as close to the reality as possible.”

During filming in Budapest, it was indeed surreal to walk around sets like the mock-up of Euronymous’ apartment, where Jonas’ obsessive attention to detail was typified by racks of extreme metal demo cassettes. The director’s realistic approach has certainly also extended to the graphic violence, which includes slit wrists, a shotgun blast to the head and countless stab wounds. So how much of these musicians’ appalling behaviour does he attribute to peer pressure and how much to some form of pre-existing psychosis?

“That’s hard for me to say. I wish doctors had analysed all these characters at a young age, so we had the answers. We’ve seen this kind of story before, in the favelas of Rio, or in the suburbs of England or Italy, where young people do crazy stuff. But in a weird way, these boys didn’t have an excuse. They came from good upbringings and there were no drugs involved. Euronymous’ parents are fantastic, decent people. So there has to be some sort of psychological explanation, mixed up with youth gone bad.”

Lords Of Chaos portrays Euronymous (born Øystein Aarseth) as something of a shrewd entrepreneur, who runs his own record label and store, and continually has one eye on sales. Despite positioning himself as an influential and evil godfather, he’s increasingly surprised by how far his associates are prepared to go.

“In many ways, Euronymous was the one who encouraged all these people,” Jonas considers. “Whether he meant it for real, they obviously did it for real. I’m sure he was kind of serious, because it’s a fact that he made death threats and took the picture of Pelle’s dead body… but I don’t believe he was a complete psychopath.

“The thing is,” he adds, “it’s really hard to make a movie about idiots. So you have to give them a reason, or some sort of sympathy or humour. This movie is the first document of what happened in Norway that shows them not as monsters, but real people – and so young. They were children. The movie starts when they’re 17 and finishes when they’re about 22.”

All these years later, the precise motivations of these people remain unclear. Does Jonas believe they actually knew what they were rebelling against or fighting for? “It doesn’t seem like they had a clear vision, because they changed a lot. There are pictures of Euronymous’ room with posters of Stalin, but then there’s something else the next time you see it. [It] feels to me like they all picked up whatever was going on at the time. I don’t think any of them were Satanists, or even religious. I don’t even think any of them cared about the Norwegian church and all that shit. Satan had nothing to do with any of this.”

Jonas Åkerlund’s Scandinavian metal pedigree is second to none. Having grown up in Stockholm, loving the New Wave Of British Heavy Metal, he played drums in the first incarnation of Bathory. Fronted by Tomas ‘Quorthon’ Forsberg, these Swedish metal legends were arguably the first to hammer the seminal metal of Newcastle’s Venom into something even badder and blacker.

“That first Bathory line-up recorded a few things together,” Jonas recalls, “but then film-editing completely took over my life. I’ve always been a much better film editor than I ever was a drummer, and creating visuals
for bands turned out to be my true calling. I don’t ever want to take any credit for Bathory. Quorthon was obviously the talent in the band.”

Jonas went on to become an award-winning music video director. Having started out working with fellow Swedes Roxette, his first video beyond his home turf was The Prodigy’s controversial Smack My Bitch Up clip. When Madonna signed The Prodigy to her Maverick label, Jonas shot videos for her too, and from there he directed the likes of Beyoncé, Lady Gaga and Britney Spears, while keeping one foot in metal with Metallica, Rammstein and Ozzy Osbourne. “I’m still shocked that I’ve done all these things,” he says with a laugh.

In the early ‘90s, Jonas was working in Los Angeles when he saw a CNN report on the church burnings of Norway. “I’d been familiar with Mayhem since 1985, but now I was like, ‘What the hell is going on?’ It wasn’t until after I’d made my first movie Spun in 2001 that I pitched a film about Norwegian black metal. Looking back, I’m happy that I didn’t make the movie then. This story needed time to breathe.”

Jonas spent many years developing the script with co-writer Dennis Magnusson. “I knew there was a movie in this story, but it took me a long time to figure out what the focus should be. Eventually, I realised it was the relationship between Euronymous and Varg.”

Beyond getting the script right, Jonas considered it important to gain the support of people who lived through the whole saga.

“I wanted to make this story no matter what, but I wasn’t expecting the support that I got. There are obviously a lot of sensitivities involved, because a lot of people died. A lot of people are still living with a dead child or a dead brother, all the way down to the fireman who died in a church fire. Pelle’s brother Anders has been tremendously supportive, and then of course the Mayhem members Necrobutcher and Hellhammer were important for me from the beginning. I’ve understood their hesitation and frustration. Imagine someone making a movie about your life.

“Early on,” he continues, “Euronymous’ parents took a big step away from the black metal scene and would have nothing to do with it. So for them to meet me, read scripts and give clearance on music was fantastic. I’ve been in contact with everybody except Varg. Now that a lot of time has passed, this movie is becoming important. Maybe it’s closure: a chance to portray these people like human beings, not monsters.”

Despite Lords Of Chaos having the combined weight of production companies like Vice Films and Blade Runner director Ridley Scott’s own Scott Free behind it, Jonas does not necessarily expect the film to be readily adopted by mainstream audiences. “The movie’s getting great reviews, but it’s a hard sell because of its dark nature.”

Being a notably laid-back kind of gentleman, he seems unruffled by the inevitability of some disgruntled black metal fans insisting that Lords Of Chaos got the story all wrong.

“While I’m not expecting the metal scene to like the film, at the same time I want some kind of approval from them. I definitely don’t want to have fucked up by having the wrong T-shirt or shoes! But because it’s been so long, I don’t think anybody really knows what happened back then. The story’s changed over the years in interviews. Even Varg has changed his story several times, when he says what happened on the night he killed Euronymous. But since I’ve taken in all the information I could, including the police investigation, this probably leaves me knowing better than people who were there!”