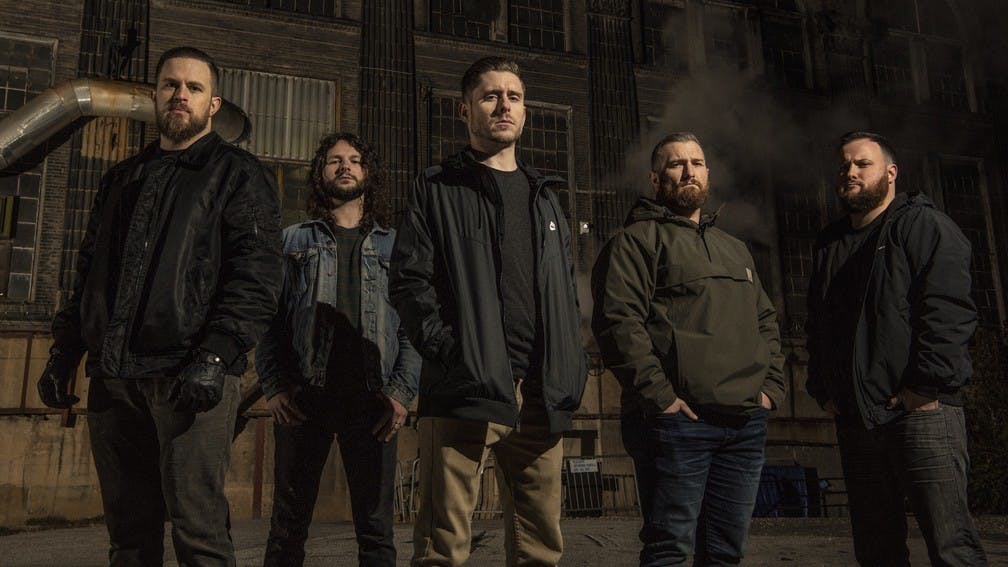 For a generation of fans, Whitechapel are the most legitimately brutal band of the deathcore movement. The Tennessee quintet’s patented combination of meteoric riffing, cataclysmic breakdowns, guts-deep vocals and blood-soaked subject matter has made them icons in a genre that swiftly seemed to move from fearsome to fashionable. While many of deathcore’s flagship bands started playing rock star and courting radio airplay, Whitechapel were always there to bring churning, pulverizing metal to fans of sonic darkness.

But brutality takes different forms, and on their latest album The Valley, Whitechapel have gone to grisly new places. While some fans might raise an eyebrow at the fact that the album is easily the band’s most melodic, and contains plenty of dulcet guitars and clean vocals, they will without question hear that Whitechapel’s penchant for the sinister remains unsullied. Songs like When A Demon Defiles A Witch and Third Depth exude a brooding hopelessness and misanthropy, while We Are One and epic closer Doom Woods are as ferocious as the band has ever been.

We reached out to guitarist Ben Savage and got his thoughts on what makes The Valley so challenging — and powerful.

What about the new album are you most excited for Whitechapel fans to hear?

Probably the songs that sound different for us. We’re excited about the album as a whole, but I’d say probably Hickory Creek or one of the songs where we definitely dove in the deep end to see what we could pull off. We went this long in our careers dabbling with more melodic vocals and singing, and we really wanted to wait until these songs were so great that we could put ‘em on a record.

Was there ever a moment during The Valley’s creation where you worried you’d gone too far in that unorthodox direction?

Not necessarily, because we all agreed on the riffs and listened to the material before we went in and constructed songs. If a riff sounded too happy, it was a no-go from the get-go. It needs to have a dark attitude — we just kind of stick to that path. I guess we also didn’t want the songs to be too long. There’s a process of just making sure we can cut off the fat, and make the songs have more impact. So there was a lot of that — trimming the fat back, rearranging, that sort of thing.

That’s rare — usually, when a band experiments with new elements, it means that they go sprawling and long-form. You went tighter.

We wanted to stick to structures, and not go off into unknown worlds, in full space cadet status. Once we had a structure in mind, we could mess with it — add a pre-chorus there, add another part to the bridge, add an intro or an outro. We wanted to make a foundation for the songs first, before adding little things here and there. You get the verse, chorus, bridge, and then after you get that you can mess around with it. We call it the cycle, kind of like what Metallica calls it. First, the parts that repeat, two or three riffs that sound good together, and then after that you can see the song work together.

As far as songs that’ll challenge fans, When A Demon Defiles A Witch and Hickory Creek. Demon will confuse people because it starts as this really brutal song, and then it goes into this whole melodic thing. It kind of shuts people up in a way: people who complain about us not being as heavy will hear these brutal parts, and be into it, but then they’ll hear this other part and not know what to think. I’m always down for that. And Hickory Creek is just kind of mellowed out, so I’m interested to hear people’s take on that — it’s still dark, so it’ll be interesting to hear diehard fans’ thoughts on that.

And in terms of old-school-sounding, keeping-the-fans-happy tracks, that’s why we chose Brimstone to be released first. It’s a super groovy song, but it’s chunky all the way through. I love bands like Morbid Angel, who create a molten lava sort of sound, just brewing from the depths of the earth. We’ve always tried to have a song like that, but I think we really nailed it with this one.

Listen to Kerrang!’s exclusive stream of Whitechapel’s The Valley in full:

Whitechapel’s The Valley comes out tomorrow, March 29th, on Metal Blade Records, and is available for preorder now. The band has live performances currently scheduled in North America, the UK, and Europe, so make sure to get tickets at one of the dates listed here.

For more about The Valley, check out our 4-K review of the album.

The opening track on Whitechapel’s new album The Valley is creepy, but its inspiration is even darker...