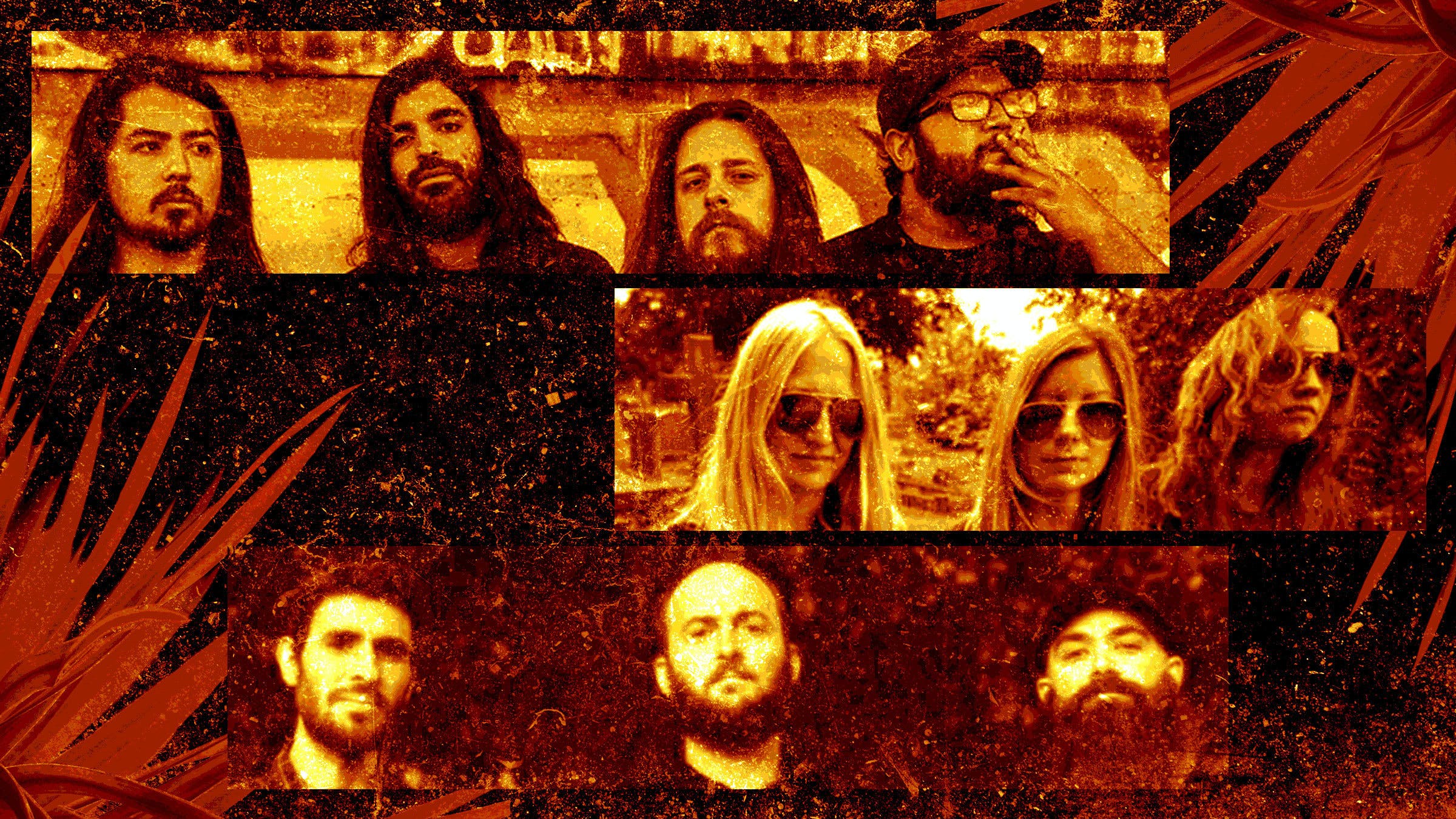 If you believe everything you see in pop-culture, Los Angeles and Southern California seem like something out of a daydream: good vibes, endless sun, and the promise of becoming a star.

But to many residents of LA, their home is inextricably tied to things that aren’t as positive and sparkling as you’d think: stark economic inequality, rampant homelessness, routine violence, and congested roadways. With traffic, it can take an hour to get anywhere. One neighborhood might be impoverished, but walk three blocks and you’ll see expensive cars shimmering in front of huge houses and manicured lawns. Look closely at any palm tree and you can see how the dirty air has seeped into its blackened trunk. Add in the collective fears of earthquakes and drought and it’s easy to understand why cathartic styles of heavy music would thrive there.

Los Angeles has played an integral role in the evolution of metal. Saint Vitus’ influence reaches so far that it’s impossible to imagine what doom would look like had the group never formed, infamously trolling hardcore kids at Black Flag shows with lumbering riffs and a biker-gang ethos. When punk and metal fans craved speed, Saint Vitus gave them a sonic middle finger.

Since then, the LA area has birthed such legendary acts as Goatsnake, -(16)-, Red Sparowes, Ides of Gemini, and many others. Transplants such as Melvins -- the group who invented sludge metal -- have long called LA home as well. With a rich musical history to draw from, not to mention its impossible-to-ignore environmental and social problems, the Los Angeles area is fostering a new generation of doom, sludge, and post-metal.

Though there are, of course, many great bands in the LA area, here are 10 up-and-coming doom, sludge, and post-metal bands you should check out now.

High Priestess reminds us that the desert and ocean sprawls further than any suburb of LA -- and that, long after the city has reverted back to dust, those things will remain. “There is a cold, deep ocean on one side of LA, a vast and arid desert on the other,” says the band. “In between is a city haunted with dead dreams. We tap into the mysterious creative energy that ebbs and flows throughout, sometimes beautiful, sometimes terrible.”

The trio’s self-titled album takes cues from SoCal desert-rock pioneers Kyuss in how it captures the desert’s heat and cosmic vastness with calming psychedelia. Mariana Fiel’s chilling screams and Katie Gilchrest’s plodding, Electric Wizard-esque riffs are more in tune with the haunted vibes of Los Angeles. Through the eyes of High Priestess, the comforts of modern society are mirages, disappearing when you look closely.

Future Usses, which features Intronaut guitarist-vocalist Sacha Dunable, guitar craftsman extraordinaire at Dunable Guitars, strides through trance-inducing atmospheres and swirling heaviness with a nimble step. The Existential Haunting puts Sacha’s dexterity as a songwriter on full display, as the record has more in common with bands like Jesu, The Life and Times, and Failure than Intronaut. Future Usses navigate complicated timings and syncopation without drawing undue attention to that musicianship, using those tools to open portals for disembodied meditation.

Trapped Within Burning Machinery hail from Moreno Valley, which can seem worlds apart from Venice, Hollywood, and Beverly Hills in both spirit and commute. “For me, Southern California’s smog-coated industrial landscapes are not only beacons of despair but also a wellspring of inspiration for doom, sludge, punk, hardcore, and metal in general,” says guitarist-vocalist Zak Morris. Trapped Within Burning Machinery taps directly into the industrialized despair Zak discusses via churning rhythms, ominous guitar harmonies, and grating screams.

Karas is post-metal in the truest sense, using elements of sludge, black metal, jazz, and post-rock to craft music that defies genre. Play the group’s self-titled record for ISIS or Deafheaven fans, jazz-heads, metalheads, and anyone between: they’ll be hypnotized by the fury and tranquility. Drummer Alejandro Aranda propels the group much like Mastodon’s Brann Dailor on Remission and Leviathan, playing with the grace of Buddy Rich and the power of Dave Witte.

“All four of us mostly grew up in suburban areas,” guitarist-vocalist Jacob Eras says. “While they were safe places for us, we can each agree that over time, they started to feel too closed off. The day-to-day flow of people began to feel a bit claustrophobic. It influences our music in the way that we want to take people who also feel stuck in this cycle away to challenging and more expansive places. It's easy to feel isolated in big cities and boring suburbs, so we imagine our music is like this giant bubble that takes you out of there, shakes the living shit out of you, and then sends you off with a hug to somewhere that's easier for you to breathe and express yourself."

Featuring members of Eyes of Fire and sludge-grind legends Dystopia, Destroy Judas has been laying audiences to waste since 2011. “Being a lifelong SoCal resident, you truly see this area as it is,” says guitarist Dan Kaufman. “Not the big lights and flashy cars, but the struggle just to survive here. All the fakeness of people trying to sell you something they are not is what really got to me and influenced Destroy Judas. No one is who they say they are. Everyone is trying to use you to their advantage and make you a stepping-stone. I guess that’s just part of living in ‘paradise,’ though.”

On their recent split with Io Apreo, Destroy Judas floats through austere calm before unleashing floods of riffs that could fill the Grand Canyon. With so much narrative movement, it’s easy to forget that To What End is just one track. Destroy Judas takes similar advantage of longform songwriting on their other releases -- particularly the one-song album Forever Like Stars…We Shine -- using that approach to let each riff breathe while also avoiding self-indulgence.

Since their first EP, Galena has traded a black-metal sensibility for crusty sludge vibes in line with Dystopia and Damad. The group hails from the dirty shores of Long Beach, a city where oil derricks churn alongside palm trees, restaurants, and residential areas. Denise Pla’s serrated riffs and Brody Cuellar’s sandpaper screams paint a very different picture of LBC than Sublime’s Summertime (Doin’ Time). Galena’s impending first LP will assuredly encapsulate all the grime of their home.

Qaalm’s debut, Reflections Doubt, consists of one gargantuan track that lumbers forth with animalistic wrath but also swirls in eerie quietude, avoiding both predictability and abruptness in its transitions. Says vocalist Pete Majors, “The drastic contrast between the rich and poor in LA couple with an unbelievable cost of living that has certainly contributed to Qaalm’s music and outlook.” Reflections Doubt shows a band that has just begun to harness their potential to transform hopelessness into crushingly heavy music.

With so much genre-blending among heavy bands these days, Cloven reminds us that, coming from the right hands, straightforward doom can pack as much of a punch as ever. Aside from its earthquake-inducing production (courtesy of Sanford Parker) and skin-eating shrieks, Graveyard of Scars sounds like it could’ve emerged from the same era as Candlemass or Saint Vitus’ best records, relying on the simple yet undeniable power of riffs that worship at the altar of Black Sabbath.

The duo’s two-track EP, II, sounds like members of Pelican and 5ive combining the metallic drive of those bands with the high energy jamming of Earthless -- because that’s exactly what INTRCPTR is. Drummer Larry Herweg is a locomotive of rhythm, hauling Ben Carr’s triumphant riffs into the smog-distorted sunset.

Originally based in Los Angeles proper, INTRCPTR now splits their time between Palm Springs and LA. Ben says, “Running 85 mph from the city into the desert, concrete sidewalks change into banks of sand. The tall office buildings morph into mountain ranges, and the echoes of traffic jams give way to the wind ripping through a canyon at night. Coyotes stare right back at you, their eyes reflecting in your headlights. "

The duo’s challenge for a full LP will be to live up to the majestic efforts of their other bands. If II is an indicator, Ben and Larry are more than ready to tackle that challenge head-on.

Previously known just as MGR, this project started as a vehicle for Isis guitarist Mike Gallagher to explore the ambience of Oceanic and Panopticon in more extreme ways. Mustard Gas and Roses has since evolved into a full band that charges forward with pummeling, sludge-encrusted rock. Featuring Ides of Gemini member J. Bennett on bass, Mustard Gas and Roses glides through the tense quiet fans would expect from these musicians while also barreling through town with unapologetically badass metal riffs.

J.J. Anselmi is the author of the book Doomed to Fail: The Incredibly Loud History of Doom, Sludge, and Post-Metal. Preorders are available now.

Exclusive: Darken Your Spring With a New Video From Trapped Within Burning Machinery