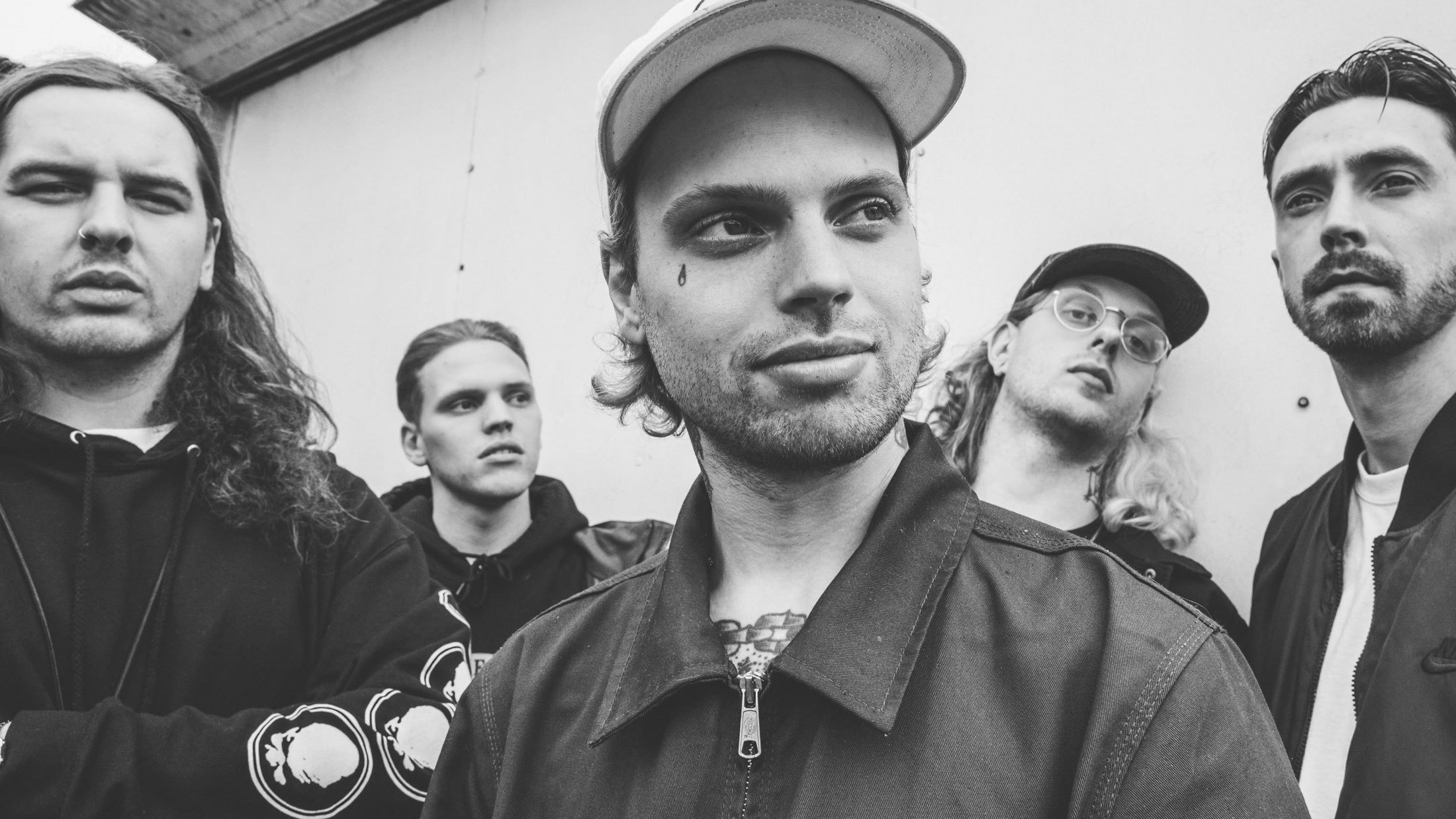 Life is an ever-turning wheel. Refreshment and reinvention are pivotal to health and survival within that – something Higher Power frontman Jimmy Wizard can see parallels with in the current hardcore resurgence. It’s a theme explored on upcoming second LP 27 Miles Underwater.

“It’s based on the seven-year-cycle theory,” Jimmy elucidates. “It posits that every seven years we essentially become new people. In that window, every cell in your body has been replaced by a new cell.” In processing that mind-bending biological truth, there are crucial ties to the past. Most obviously, it’s in the Leeds quintet’s patented sound and aesthetic, with ‘90s heroes like Life Of Agony, Leeway and Snapcase looming large. Mine deeper, though, and you’ll find the cumulative sum of every moment leading to this point.

Growing up on an isolated housing estate in the shadow of Her Majesty’s Prison Aylesbury (an area the frontman playfully refers to as “the hillbilly side of England”), Jimmy and his brother Alex – Higher Power’s drummer – were starved of any meaningful creative outlet. Without other kids around, the frontman developed introspective tendencies that have come to serve him well as a songwriter. Despite his band’s moniker, he is not a religious individual, but is fascinated by the grand cosmic machinations of the universe around us.

A move north would change everything. After years spent hopping couches around London, the concentrated scene and lower cost of living precipitated relocation to Leeds. With an active underground and vibrant events like GhostFest and Outbreak, opportunities and ideas took hold. It was only when Alex followed Jimmy up the M1 and – despite the brothers never having played together before – acknowledged a mutual desire to explore melodic hardcore that the spark caught. Outfits like Turnstile and Code Orange had broken down barriers. Anything was achievable. “It was like, ‘It’s time,’” Jimmy laughs. “‘Let’s make some magic together!’”

Things snowballed fast. Guitarist Louis Hardy jumped aboard. A handful of songs were written and demoed. Good friend Ethan Wilkinson learned bass so that he could join the band. (“He turned up at my house, having learned the whole demo.”) Max Harper of their then-label Neutral Words Records, came in as a second six-stringer. The subsequent Space To Breathe EP triggered a hype explosion.

“Our first ever tour as a band was in America,” Jimmy laughs at the absurdity. “United Blood Fest in America hit us up. We told them we’d only been a band for a year and had a five song set! Then [Angel Du$t/Trapped Under Ice mainman] Justice Tripp arranged a whole tour around that.”

2017 debut Soul Structure and a slew of tours with the likes of Every Time I Die and Knocked Loose ensued. Jimmy pinpoints their jaunt with Suffolk alt.rockers Basement as a lightning bolt moment. “[Frontman] Andrew Fisher hit me up. It was like, ‘Damn!’ Then we realised how much sense it made. It wasn’t Basement with some hardcore band. It was just a fucking cool tour.

“I wouldn’t even say that Higher Power is a hardcore band. But we’ve definitely got that sensibility. It’s very DIY. We’re all hardcore kids and we owe everything to that world, but we didn’t want to do what every other hardcore band does. We wanted to write the music that we wanted to hear.”

So, why have seasoned peers within the scene responded so overwhelmingly?

“We’re taking a lot of risks coming from where we’re coming from and making the sounds that we do. I think other bands like to see musicians pushing it like that, because they understand how scary it can be and how wrong it can go. I think that’s why they give a shit.”

Gouging sacrifices have been made. “I was in a long-term relationship,” Jimmy reflects. “I was working in a tattoo shop. I could have had a nice comfortable life, but I knew I had to leave. Everyone has lost their jobs, or just quit, hoping this works out. These are the sacrifices that you have to make.

“Higher Power is what I’ve always wanted to do, but I never had the confidence and motivation before. Now, it feels like everything is falling into place. We’re hyper-focussed.”

“Anything can happen,” Jimmy reckons. “All these ‘headliner’ bands are coming to an end – Slayer just broke up! New acts have to stake their claim. It’s a big dream, but who’s to say anything’s impossible?”