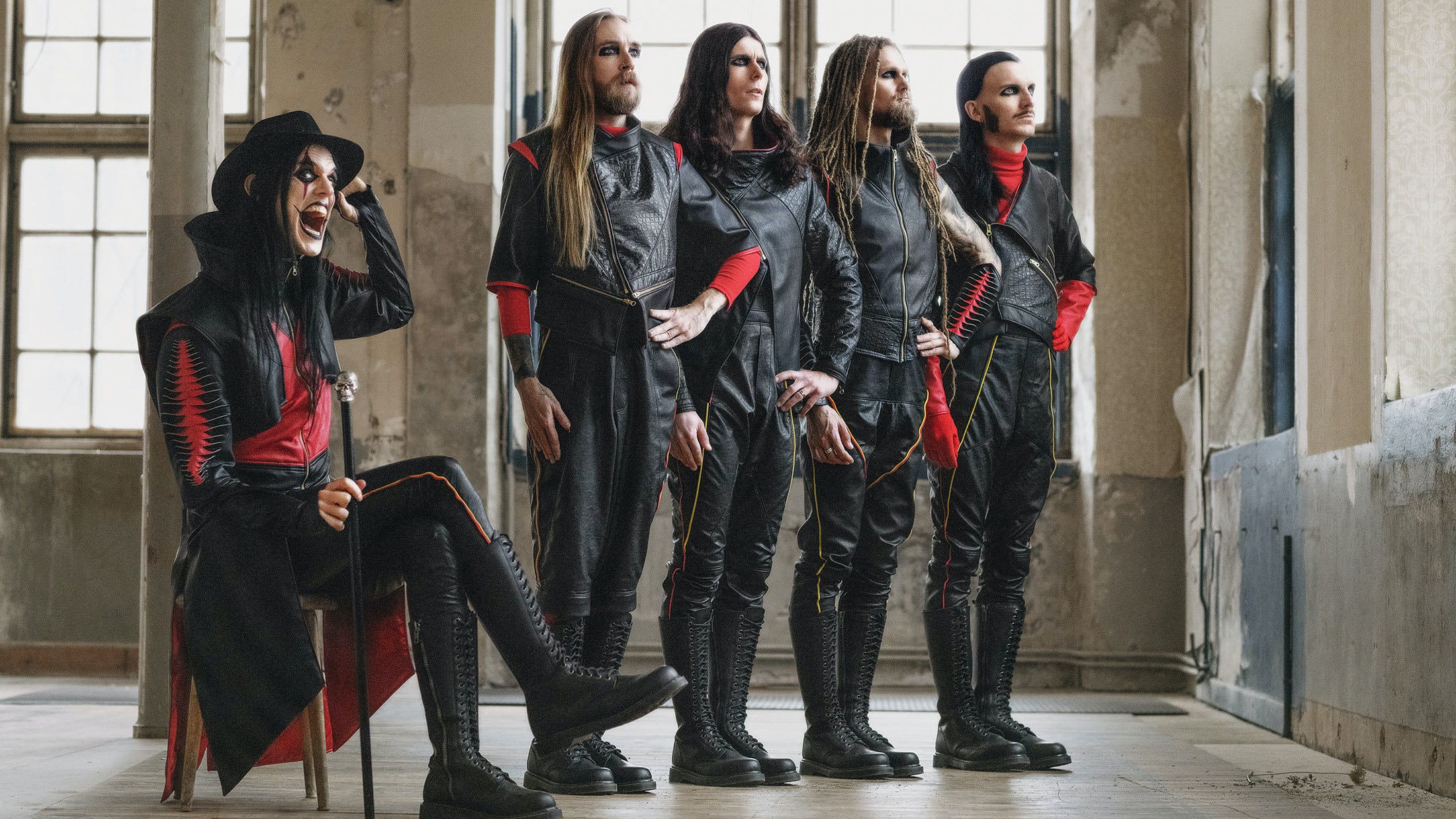 Every day, we make decisions. Thousands of them. Some mean very little once the moment’s gone – Black shirt? White shirt? Rice or pasta? Single or double? – but others have far more resonance and can change the course of our future in a way that’s hard to unpick.

Currently, says Johannes Eckerström, humans are at a fork in the road. We cannot get rid of technology, the internet, being digitally close to one another even when you’ve never met, data, massive population and massive consumption – but there are two very different futures with them. One is “Mad Max, Terminator 2, dystopia”. The other is a more hopeful place where cooperation, unity, peace, using our tech and intelligence for the greater good of all mankind. “That way is Star Trek,” he explains with a smile.

This is one of the questions Johannes ponders on Avatar’s new album, Hunter Gatherer. Elsewhere, he looks back to caveman times, and to ape societies, noting that this split in the road has popped up time and again. But it’s an idea that, as we shall see, has been working away in the back of Johannes’ mind for a long time now – not just as musical inspiration, but asking questions on how we live our lives, where it’s taking us, and where a human being can fit into a world where basic needs (food, water, shelter, heat, sex) are grinding up against an unrelenting forward motion that some call ‘progress’, and others ‘doom’.

“A lot of the album comes from a place that considers the past that brought us here, and seeing what the future holds in the sense of these urgent times, in this weird, gilded technological cage that we have built for ourselves,” he explains. “We have all this technology, and we’ve made all these advancements, but we haven’t kept up with all this change; evolution hasn’t happened to us as a species. And, in some way, that cyberpunk future from ‘90s video games and futuristic metal bands like Fear Factory, all that shit they warned us about, that is actually already happening. So a lot of the album is what it means to be human right now.”

If “right now” feels really right now, it’s not intentional. Or, at least, not that intentional. Before the word ‘coronavirus’ had entered common usage – following last year’s somewhat banterous Avatar Country record, in which the showboating, circus-tastic metallers added cowboy hats to their flamboyant, face-painted palette for a load of twangy country songs – the band “felt the pendulum swing back to somewhere darker." It was meant to be “a cosy, sci-fi” exploration of ideas, with a bit of pantomime, 2001-ish “monkeys tearing faces off”, a bit of intellectual anthropology among the visual larks. With the world now in COVID chaos, the themes and thoughts the frontman has worked into the music have taken on a far sharper focus than he ever intended, or could have imagined.

“We are a product of our time,” he sighs. “This year came out of the gates with the fires in Australia, into the COVID crisis, things blowing up… This year is a product of its own time. It would have been much nicer to have been wrong! It would have been nice to do an album that just gives you chills but you’re not living with it, like Terminator, but everything’s connected. 2020 didn’t just happen. It’s hard to see the patterns as they’re happening, but if you back up and read news headlines leading up to a big event, in hindsight all the signs were there. If you read newspapers from, like, 1910 to 1914, you’d see all the things leading up to World War One, before people at the time actually could. So, in that sense, if you put out an album that has the focus, or part of its focus, on this stuff, it’s not necessarily an accident. It’s a product of the times we live in.”

This unfortunate coincidence does, however, highlight the intelligence of our narrator. For a band as heavily disguised as Avatar, and for an album so wreathed in high-concept, Hunter Gatherer also reveals quite a lot about Johannes himself. Over the course of an hour discussing the album’s topics, questions and meanings, he’s far different that the livewire jester who acts as the band’s ring-master night after night – a well-read man who describes himself as “a science groupie” (“I’m fascinated by it, even if I don’t understand all of it”) with a curiosity to understand the world that seems to have an energy all of its own. It’s this that spilled over into the album’s underlying themes.

“A lot of thoughts were shaped by reading this book called Sapiens: A Brief History Of Humankind by Yuval Noah Harari,” he explains. “The book is a history of mankind with a mind-blowing perspective. Evidence says that we didn’t tame the wheat, the wheat tamed us. Hunter-gatherers gathered food and walked home to the cave. When they did that, they would drop seeds closer and closer to the cave, so they’d have to go shorter distances every year to find wheat. Eventually they figured it out and started planting wheat on purpose, and then we are off to the races. This was great – suddenly we could control the source of food, and as a species it was good because we could feed more. We started to give birth more, become more.”

But this all comes at a price. Johannes notes that storage meant threat of theft, meant more violent protection. Sickness rates go up. He describes the industrial revolution as “this process on steroids”, increasing food production and giving better dwellings, but forcing people to work harder than ever, in more miserable surroundings, to get on. And now?

“Now we are facing the sixth extinction, climate change, melting icecaps, boiling oceans… It’s dangerous, tense times, and now we’re at the fork in the road,” he says. “It will take a lot of cooperation and huge political will and stuff to keep things good. And there’s no turning back. We cannot climb a tree, call ourselves a monkey and think it’s gonna be fine again. We have to go forward – this is what we’re living with. And the best idea is to go full Star Trek on all of this!”

Johannes says this, and admits it’s a bummer, and apologises for that. But he also tries to be the change as much as he can, and sees one benefit of it being that you can learn so much about yourself from doing that. Using the pandemic as an example, he points to industrialised animal farming as a major problem, citing comments by Dr Michael Greger, the author of How Not To Diet, who has pointed out that many diseases and plagues have come from the effects of animal agriculture.

“Every pandemic and disease like this has come from the domestication of animals,” he says. “The author said that what we’re going through now [could be seen as] a practice run, because The Big One is around the corner, with a 40 per cent kill rate. It’s mutating in chicken cages right now in industrialised animal factories. But people keep eating McNuggets without giving it a second thought.”

So, the way Johannes tries to live can be seen as a personal solution to a global problem, a contribution to the cause. He’s been vegan for years, and is careful of what products he buys (“I’m still learning about what shampoos we shouldn’t use and stuff”), and is keen to impart to others that what might seem like a big – some still say extreme – lifestyle change, really isn’t, and it’s surprising how quickly it becomes normal.

“All this stuff, like not eating meat, feels like a huge step for people, before they take it. I learned a lot about myself in the last few years, by my diet, by workout routines and work and things. I learned how re-programmable we are. One thing is to be reprogrammed by someone else, which isn’t good, but taking steps to examine and reprogram yourself through tiny actions, in just a couple of years you can be such a different person. To an extent that’s how I feel about actions I take in my life now that I couldn’t conceive myself taking maybe five years ago. It’s a learning journey, but once you’re on that… Everyone does it without realising. It’s amazing, like, not eating meat, how quickly it becomes inconceivable how much sense it makes to before.”

And when it comes to where we are now, he has a similar view: participate, be part of the solution, make a decision to head towards the cooperative, Star Trek future where working together yields good results for everyone.

“When we share responsibility, things get done,” he ponders. “In the band, we write at a cabin in the countryside. It used to be, when we were done eating, one person cleaned up, but then they were stuck for the night. Now we all do a bit so we can all get shit-faced. If everyone does a piece, it’s not so much that needs to be done. A group sacrifice is smaller than if you do it by yourself. You don’t have to be a martyr, but then we have a society that is so Christian and fundamentally built on that one-person-saving-everyone idea. Washing away our sins. ‘Someone needs to do something!’ rather than ‘What can I do?’

“During the war, your grandparents walked past posters of Keep Calm And Carry On, with this idea of knowing why it’s important to understand buckling down and getting through things collectively,” he continues. “It can feel authoritarian, but on the other hand… look out the window! What’s going on? Be willing to play your tiny part in the big thing that needs to happen. For them it was defeat the Nazis, now we have to defeat COVID! That’s what we need to see – how we’re part of it.”

This is part of the reason why Johannes sees a light at the end of the tunnel, a Trekkie future, rather than the pandemic carrying on forever. For now, he’s happy enough at home, actually getting the chance to spend time with his wife and his dog. But that doesn’t mean he’s not getting up onstage the second he’s allowed.

“I do see a future where we’ll be able to hit the road, where there’s a vaccine,” he says. “There are times where I go, ‘Oh fuck, I need to do my thing, not just be at home,’ but I’ve come to terms with it, because I believe we will get to it soon enough. And if we don’t, it’s because other, more pressing matters are at hand. And when we do get back, it’s gonna feel really good. I guess it will be like my first concerts as a fan. I remember seeing Blind Guardian when I was 16, having been a fan since I was 12, and I think every concert is going to feel like that for a bit.”

And he’s right. Things shouldn’t be as they are right now. It’s weird. It’s frustrating. But when we get these things we love back – like gigs – we’ll know what we’ve been missing.

Avatar’s album Hunter Gatherer is out now via Century Media and eOne.