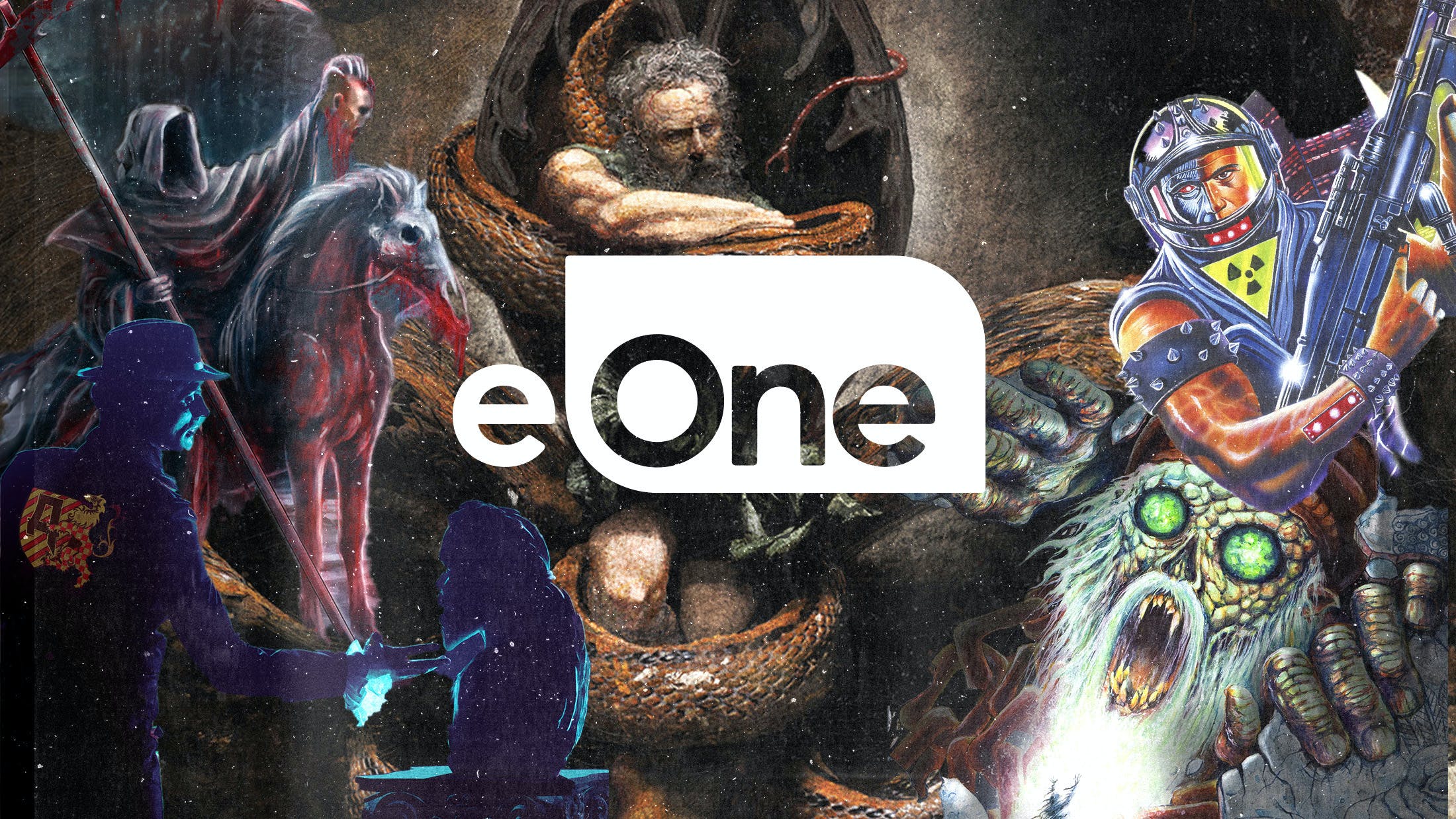 Ever since the genre became less about epic rock stardom and more about creating street-level noise, heavy metal has made darlings of those record labels dedicated to defending the faith. Label names and logos that were conceived in cramped bedrooms soon became standards that bands would give everything to raise -- from the descending ax of Metal Blade to the flatlining EKG of Relapse Records. Today, these labels are synonymous with killer riffs, backed up by catalogs and legacies that give any album they produce an instant level of cred.

And yet, in 2020, one of metal’s most interesting labels is operating outside of the traditional scene: eOne Heavy, the metal recording imprint of Canadian multinational company Entertainment One. With a diverse roster featuring both GRAMMY-winning doom acts and up-and-coming death metal talent, eOne is steadily becoming one of the most intriguing labels for heavy metal out there -- even if their logo doesn't feature dripping blood.

eOne Music started as Koch Records, changing its name in 2009, four years after it was acquired by eOne. While the label was initially known for its work with major hip-hop acts (they had an exclusive distribution deal with Suge Knight and Deathrow Records), it soon began to sign artists from all over the music sphere. On the metallic side, the label’s artists are now incredibly diverse, including High On Fire, Toxic Holocaust, Avatar, Black Label Society and Creeping Death -- each different in their own right but also united under the banner of hard work and dedication to metal.

“We look for bands that are self-motivators and self-starters,” says Scott Givens, SVP of Rock & Metal Music at eOne. “Also acts that are 100 per cent committed to their craft. That’s easily judged by touring presence, constant online presence, etc. It is excellent if they have competent management at the start, but if not, we can help pair them up with someone.”

While some lovers of heavy music might feel buried in a label that isn’t solely focused on metal, Scott thinks it’s the exact opposite -- by being part of a larger whole, eOne’s heavier side has outside influences and opportunities that can help them grow. “It’s great because we have so many divisions to draw as we market and promote our acts,” he explains. “For example, we have more people working syncs [music licensing] than any other heavy label, and they share offices with our film and TV staff, so they are right in the thick of things. Also, we get big looks for our music from the shows/movies we produce internally. The Rookie, Animal Kingdom, and Deputy have all used our music recently.”

And Scott’s opinion is shared by the artists he manages. While plenty of bands are excited to join labels with traditional metal legacies, some of eOne’s biggest names today enjoy standing out in their roster.

“We didn't want to be lumped into an ad campaign with ten other metal bands at the same time,” says High On Fire frontman Matt Pike. Last year saw Matt and his band win the Best Metal Performance GRAMMY for their album Electric Messiah, released on eOne. Previously, the band’s albums were released on Relapse, but the transition to eOne has been nothing but beneficial, according to Matt. “They were the best choice for us, which is what every up-and-coming band should weigh out and consider. They've been a great label as far as support goes, financially, creatively, and are full of ideas if you need them to be.”

“The people there are pretty hungry to keep the reputation they have going -- to be this powerhouse in metal,” says Joel Grind, frontman of old-school thrash warriors Toxic Holocaust. “They have everything from Crowbar and Zakk Wylde to High On Fire and Lord Dying. It’s all so different, but it all kind of works together in a weird way. I can only speak for my experience, but I made it very clear that I wanted to keep it where I can contact people from the label and keep it DIY. And it felt totally comfortable -- it didn’t feel like a bunch of suits that I have to deal with. I think any band would have some reservations going in, because it’s a bigger company in general.”

While Matt and Joel are more than complimentary of their label, they’re also scene veterans who have experienced the ins and outs of the music industry. But metal thrives on up-and-coming acts bringing new forms of aggression and power to the genre -- something eOne are proving they're invested in.

“We were basically playing the worst show of our lives, loading gear in the most torrential rain I’ve ever seen, and later that day someone checked our email and there was an unread from eOne,” says Reese Alavi, frontman of Creeping Death. Last year saw the Texan death metal band release their full-length debut Wretched Illusions on eOne. As a metalhead, Reese knew little about the label -- and as the vocalist of an emerging death metal act, he was surprised they knew about him.

“They reached out to us first and they really believed in what we were doing even as a super small band,” explains Reese. “We were all pretty much unfamiliar but as soon as we saw the roster we were pretty stoked. We were like, ‘Do these guys have the right band?’ We’ve had creative freedom in every aspect of the band. From designs to production we get to do what we want how we want.”

As their roster continues to expand, eOne are becoming more and more of a label metal bands both emerging and established have come to respect. And while they may not have the ‘metal’ look of some of their peers, Scott Givens isn’t bothered by standing apart from the pack.

“Definitely not,” says Scott. “I think because we have always been a label that’s had all styles of rock and metal, we don’t fit into the mold of the genre-specific labels. But look at the artists we have and how well respected they are and they all but one elect to stay with us. Black Label Society, High On Fire, Crowbar, and Pop Evil have all extended their initial deals with us. That, to me, says we are doing things right.”

For a limited time, visit eOne's newly relaunched merch store and enjoy 10 per cent off anything you buy with the promo code eOneKerrang. Shirts, vinyl, outerwear, CD bundles and more!