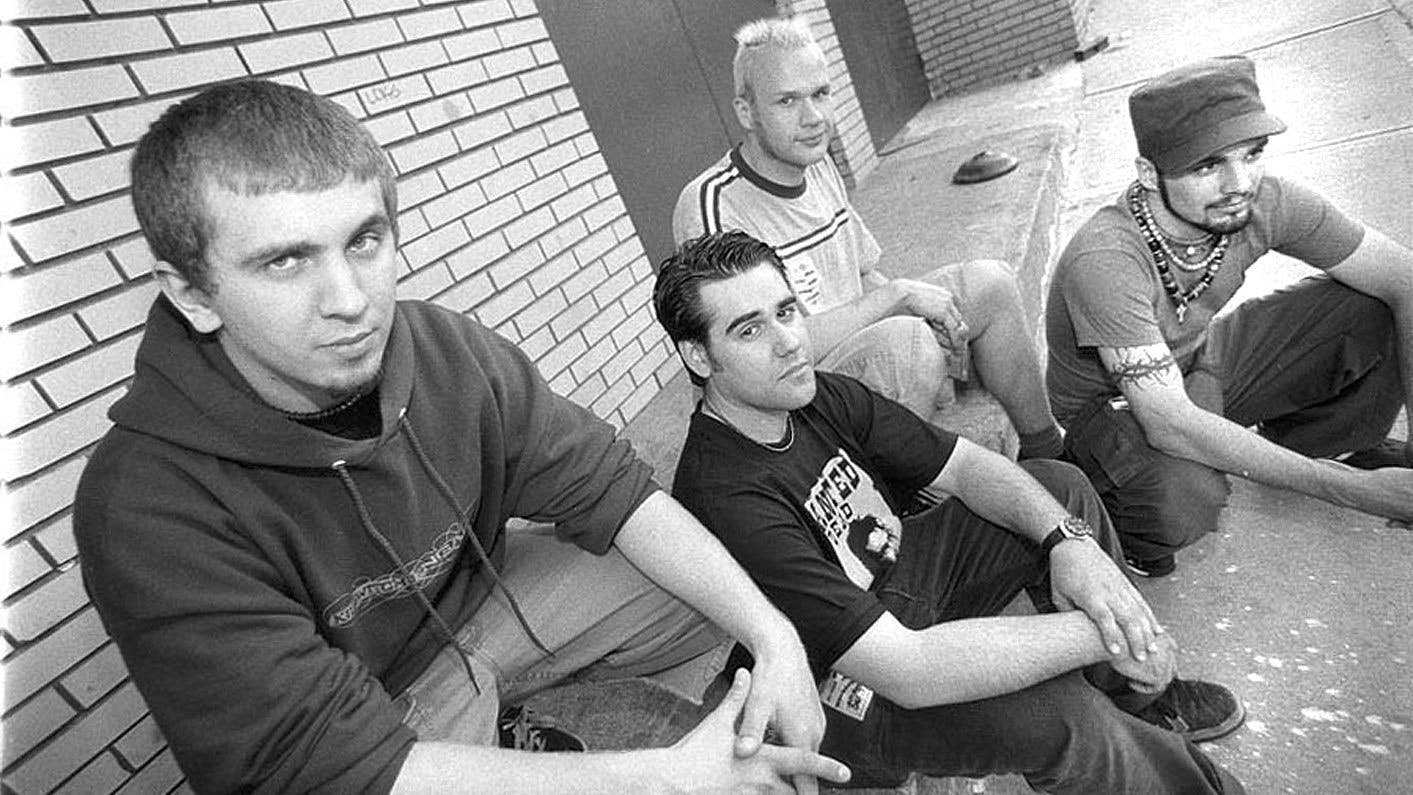 Released 20 years ago this month, Killswitch Engage’s self-titled debut is rightly seen as a major steppingstone in the then-burgeoning subgenre of metalcore (itself a style that sits within the larger spectrum of NWOAHM that rose to prominence in the mid-1990s). Fusing the destructive temperaments (see: devastating guttural grows) and techniques (blastbeats and breakdowns) of extreme metal with the impassioned social commentary and DIY attitudes of hardcore punk, the Killswitch Engage LP forged a characteristic and influential blueprint. It may not be as popular or impressive as its successors; yet, considering how far it took the band – while inspiring countless artists we love today – it’s undoubtedly one of their most important.

The Massachusetts ensemble formed in 1999, when bassist Mike D’Antonio left metalcore pioneers Overcast and joined forced with Aftershock guitarists Adam Dutkiewicz and Joel Stroetzel. In addition to incorporating aspects from those previous projects, they drew from heavyweights like Metallica, Integrity, Carcass, Disembodied, Slayer, and At The Gates. Commendably, they began writing music without a vocalist, and according to Adam, most of the “starter riffs” came from Mike as he “came up with new drum arrangements”. As a collective they had a burning desire to redefine the exclusory mentality of the hardcore scene (which openly contained yet contested ties to metal) while refuting the rising popularity of nu-metal, a genre Adam previously described as “silly lyrics and mouth noises”.

And so they set out to bring a modernised take on old-school aggression into the mainstream. Once former Nothing Stays Gold vocalist Jesse Leach entered the picture – with a “mix of insecurity and a ton of raw determination”, as he puts it – they absolutely did.

“I totally abused my voice and body for it. We knocked it out fairly quickly, [and] I wouldn’t change anything about it,” Jesse continues. The record was produced by Adam D and released on Ferret Music, for whom Mike was already working as a graphic designer (and with unwavering confidence and drive, he sensibly convinced Ferret to sign them).

True, the Killswitch Engage album is somewhat rigid and unpolished when compared to its successors, but its music and vocals ooze forward-thinking charm. For instance, Soilborn is a sludgy, hypnotic, and devilish powerhouse full of ferocious singing, agitated spoken-word interruptions, relentless blastbeats, tranquil transitions, and dynamic guitar riffs. Its “thrash/hardcore/metallic vibe” – as Jesse describes – can surely be felt within bands like Mastodon, Periphery, and Code Orange. Likewise, Irreversal merges classic heavy metal sharpness and rhythms with soaringly self-reflective hardcore defiance. Plus, the inclusion of the brief Prelude halfway in gives the record a sense of unified coherence, something that was rarely seen in metalcore beforehand.

Later, instrumental closer One Last Sunset treks a more classical, tasteful, and weightier route by using ethereal piano chords, tense acoustic guitar strums, and battle-ready syncopation to set a theatrical and multifaceted base upon which bands like After The Burial, Born Of Osiris, and Between The Buried And Me would greatly expand.

In contrast to the prevailing lyrical pessimism of metal at the time, the album’s emphasis on uplifting decrees is a major distinction, too. In particular, opener Temple From The Within begins: ‘Make me feel serenity when all is revealed / So easy to look back in life and question / But I must seek to find the strength / To push forward.’ Similarly, the next tune (Vide Infra), contains encouraging sentiments such as, ‘No-one is placed higher than another / No matter race or creed or gender / We must teach forgiveness and compassion for all life.’ Naturally, the rest of the record maintains those heartening messages, overtly tapping into Jesse’s faith while paving the way for Christian metalcore darlings like The Devil Wears Prada and August Burns Red.

Although Killswitch Engage wasn’t a commercial hit, it drew enough positive word-of-mouth to bring the group bigger touring opportunities. Perhaps more importantly, it got them the attention of Roadrunner Records. As Mike recalls, Ferret owner – and Roadrunner “web media guy” – Carl Severson championed them to other staff members.

“[They] saw more in us than we did, and the contract took forever to finalise. During that time, we honed our craft, paid our dues, and literally went for broke. We even quit our day jobs and started touring for a living. It was a scary but worthwhile risk,” Mike says. From there, they grew in every way with the more beloved and successful Alive Or Just Breathing. In turn, Killswitch Engage represents a powerful lesson on how fast and far a metalcore group can go with the proper mindset, talent, and nerve.

Twenty years on, Killswitch Engage remains satisfying in and of itself, with a captivating blend of optimistic viewpoints, hooky melodies, and invigorating arrangements. “It’s different from the other albums… it’s the birth of who we became,” Jesse reflects. Furthermore, each of those elements set the stage for not only the band’s perpetual growth, but also for dozens of exciting and novel artists to follow in its footsteps. It’s a rags-to-riches story that showcases how much success and impact can arise from humble beginnings and clear creative visions. Although Killswitch Engage – and metalcore overall – have grown in the years since, the subgenre as we know it today simply wouldn’t be the same without it.