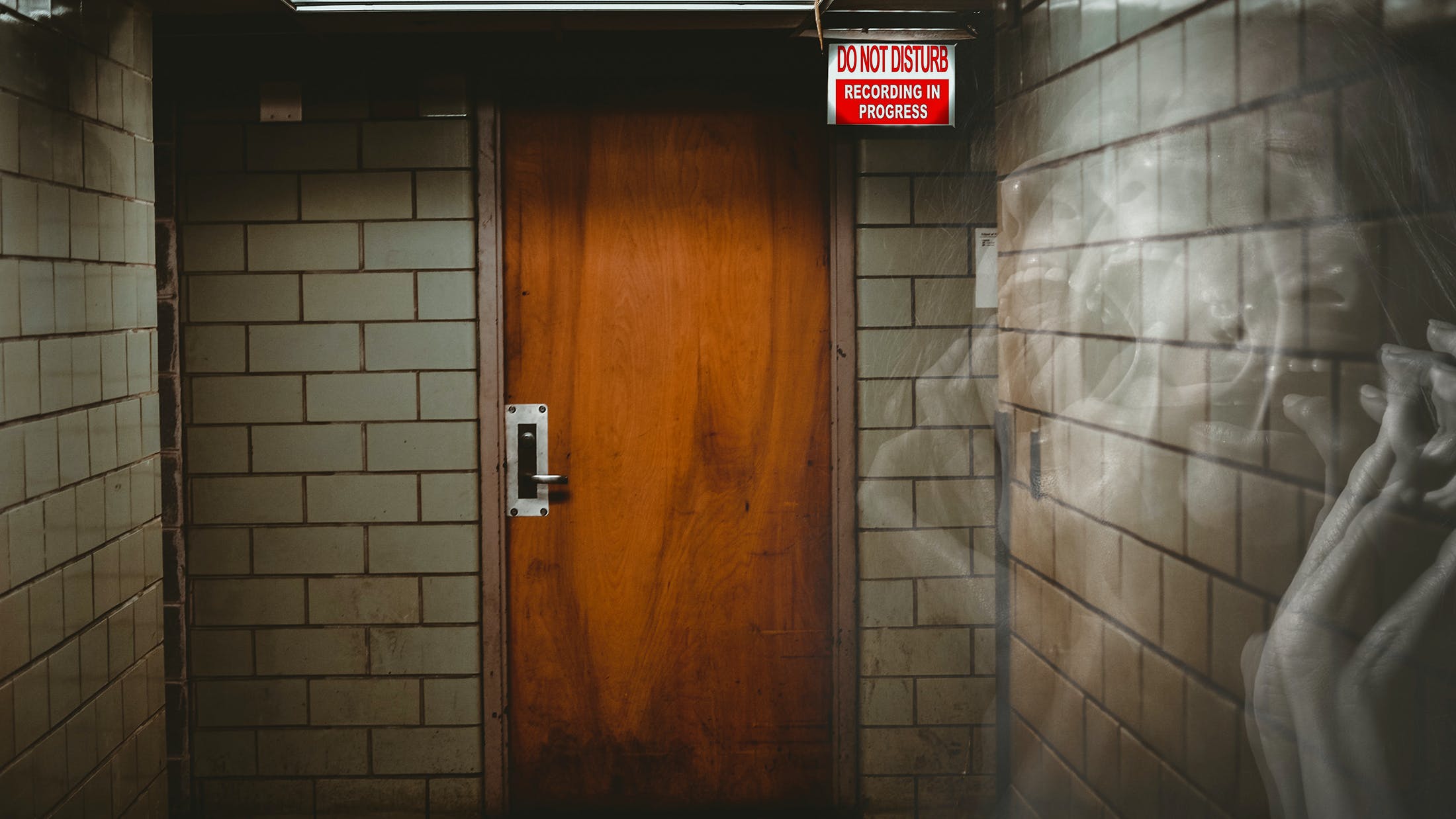 Making an album is an exhausting and emotional process, but one that can be made even more emotional and exhausting if there’s a big load of flippin’ ghosts whizzing about the place putting you off your music!

At the same time, it makes sense that rock musicians would be attracted to the sorts of places frequented by spooks. The type of person who feels compelled to spend their life creating the kind of art that so frequently deals with powerful emotions, aggression, death, history and planes of existence far beyond our own are unlikely to turn down the opportunity to interact with the spirit world.

Also, lots of them are quite drunk.

Black Sabbath have always enjoyed leaning into the spooky side of things, hence opting to work in the dungeon of a haunted castle for their fifth album. Clearwell Castle, built in 1727, had previously been used as a rehearsal space or recording studio by bands including Led Zeppelin, Mott The Hoople and Deep Purple, but Sabbath decided to up the creepy factor by decorating it in Satanic imagery and exploring its subterranean side. In between playing pranks on each other (to the extent that everyone was perpetually terrified, with Bill Ward taking a dagger to bed with him), they also encountered the castle’s resident friendly spirit. Tony Iommi later recalled: "We rehearsed in the armoury there and one night I was walking down the corridor with Ozzy [Osbourne] and we saw this figure in a black cloak. We followed this figure back into the armoury and there was absolutely no-one there. Whoever it was had disappeared into thin air! The people that owned the castle knew all about this ghost and they said, 'Oh yes, that's the ghost of so and so.' We were like, 'What!?'"

When Meat Loaf was working on his mega-selling glam-rock opera (43 million copies and counting), he had a few ghostly encounters which only became clear to him later on. When the figure of a woman in white drifted past his window, he assumed it was one of his producer’s one-night stands. “And I went, ah, man... Todd Rundgren groupie!” he recalled in the 2015 documentary The Haunting Of Meat Loaf. He later had another, less-ambiguous encounter with a spirit that slammed cupboard doors and ripped the covers from his bed. Panicked, he swallowed an amount of composer Jim Steinman’s sleeping pills, which was a dreadful idea. Meat Loaf survived the incident, although insists he continues to see ghosts frequently (greeting them with the imaginative opener “HEY HEY HEY HEY HEY”).

The Mansion – built on the site of a house previously owned by Errol Flynn, and once rented as a magic practice space by Harry Houdini – is a four-bedroom house in the California Hills. Legendary producer Rick Rubin bought it in the 1990s, and decided to record the Chilis in it, an experience he found so easy and rewarding that he went on to record a lot more albums there. However, the Blood Sugar… sessions were not without creepiness. Drummer Chad Smith refused to stay in the house with the rest of the band, saying, “I’m not scared of ghosts, but I felt a presence.” Strange orbs showed up in photographs. Flea reported seeing “a woman in black”. John Frusciante perceived the ghosts as friendly, going as far as to masturbate in front of them (there’s friendly and there’s friendly, John). The guitarist has encountered a fair few ghosts in his time, once claiming to struggle with upwards of 400 living in his head…

Recorded in: Chepstow Castle, Chepstow, Wales (well, some of it)

While most of Sepultura’s fifth album was recorded in Rockfield Studios in Monmouthshire, Sepultura opted to do one track – the ambitious, acoustic, multi-percussionist instrumental Kaiowas – live in the ruins of Chepstow Castle. Though no creepy goings-on were reported in the session, the castle is supposedly haunted by the ghost of Henry Marten, an English lawyer who died there in 1668 after choking on a chicken bone. Surprisingly intellectual for ghosts, a spectral game of chess once played out in a locked display cabinet in the gift shop, as the pieces moved overnight with no signs of disturbance. The gift shop has also had the odour of onions waft through it with no obvious source, and it turns out to have been built above what was once a kitchen. If it was the smell of apples, and it really got on Sepultura’s nerves, Max Cavalera could have shouted, “Fruits! Bloody fruits!"

Trent Reznor wasn’t unaware of the historical significance of the house he rented at 20050 Laurel Canyon; it was the site of the infamous 'Manson murders', in which a cult in thrall to a maniac murdered five people. While he never reported seeing any ghosts, he ended up leaving the place after deciding it had “too much history to handle”. He met Sharon Tate’s sister, who accused him of exploiting her late sibling’s death, and the human side of it all came to him – the realisation that it wasn’t just a historical event, but one in living memory that had left hurt people behind.

Ghostly encounters weren’t the only thing that upset Corey Taylor during the recording of the ’Knot’s third album – he accused producer (and haunted studio owner) Rick Rubin of only showing up for 45 minutes a week and spending most of that time eating smelly food – but they were up there. As he recounted in his second book, A Funny Thing Happened On The Way To Heaven, weird stuff happens in that mansion: “I was alone in our [Corey and Shawn 'Clown' Crahan's] rooms. The door to our room was shut and locked, the doors to the balcony were shut and locked, but the door to the bathroom was wide open. I was taking a shower, getting ready to hit the town with a vengeance. I was in a great mood, singing along with the Bee Gees and washing all my filthy bits that needed immediate attention. The shower curtain was open a smidge and could see the room from my vantage point. I looked up. A man in a tuxedo walked past the open door, staring right at me.” Joey Jordison also had weird experiences: he felt a ghostly form pass through him in the basement, and reported his door swinging open at exactly 9:30am every morning.

Killswitch Engage – The End Of Heartache (2004)

Guitarist, engineer and producer Adam Dutkiewicz spent huge amounts of time in the studio working on Killswitch’s third album (and the first to feature singer Howard Jones). During the hardcore three-month session, fuelled mainly by spicy food and taking only Christmas Day off, he had creepy encounters with the studio manager’s deceased father. "One night he had a séance to talk to his father because he and his dad still had some unsettled business,” he told Revolver. "He thinks ever since then that his father's ghost won't leave. It's really weird." Adam reported seeing “crazy lights” and “floating orbs”, while drummer Justin Foley saw "shadows doing things that shadows don't normally do", and guitarist Joel Stroetzel had an extremely close encounter during a series of naps. "I was laying there,” he said, “and I swear I kept feeling someone brush against me or walk through the room. Then I'd wake up and there was no-one there. It creeps you out."

During the making of System Of A Down’s companion albums, Rick Rubin’s publicist Heidi Robinson-Fitzgerald had a creepy encounter. She turned up early one day to set up for a day of press and interviews, and sat down alone facing the central staircase. She suddenly felt something behind her. “It wasn’t bad or anything, but it was obvious and it grew to where it was so intense that I felt like something was standing right behind me,” she told Fader. And then, an apparition appeared – a woman dressed all in white, walking down the stairs. “There was no breeze in the house, but whatever she was wearing was floating in the wind,” said Heidi. The woman then turned around and walked back up the stairs before disappearing. During the same recording sessions, guitarist Daron Malakian reported strange noises coming from his amp tubes at 4pm every day.

The Mars Volta are also veterans of Rick Rubin’s haunted Mansion, with singer Cedric Bixler-Zavala encountering mysteriously opening doors while recording 2003’s De-Loused In The Comatorium. Three albums later, they encountered spooky goings-on again – it seems ghosts really like hardcore-influenced prog rock – after a series of experiments with a ouija board. While initially the band merely conversed with spirits through the board, using their tales as inspiration, as the recording process began they found themselves beset with issues. Their drummer left, Cedric found himself re-learning to walk after foot surgery, and their engineer had a nervous breakdown, telling the band: “I'm not going to help you make this record. You're trying to do something very bad with this record, you're trying to make me crazy and you're trying to make people crazy." The studio flooded, audio files mysteriously disappeared, and everyone generally had a terrible time until guitarist Omar Rodríguez-López broke the ouija board in half and buried it in a never-to-be-disclosed location.

When PVRIS were nearing the end of working on their second album in a converted church in upstate New York, their engineer Anthony was working in the room previously used for wakes. He heard someone coming down the stairs, and turning to greet what he presumed would be the band, was in fact greeted by nothing. Lynn Gunn and he began setting up ‘ghost traps’ in the basement, mainly involving ping-pong balls which they invited the ghosts to move. Sure enough, they’d find the balls moved across the room. At one point Lynn, playing darts, invited any ghost present to help her get three bullseyes. It didn’t happen, and she threw “horribly”, but returning to the room an hour later – during which nobody else had been in there – she found all three darts sticking out of the bull.