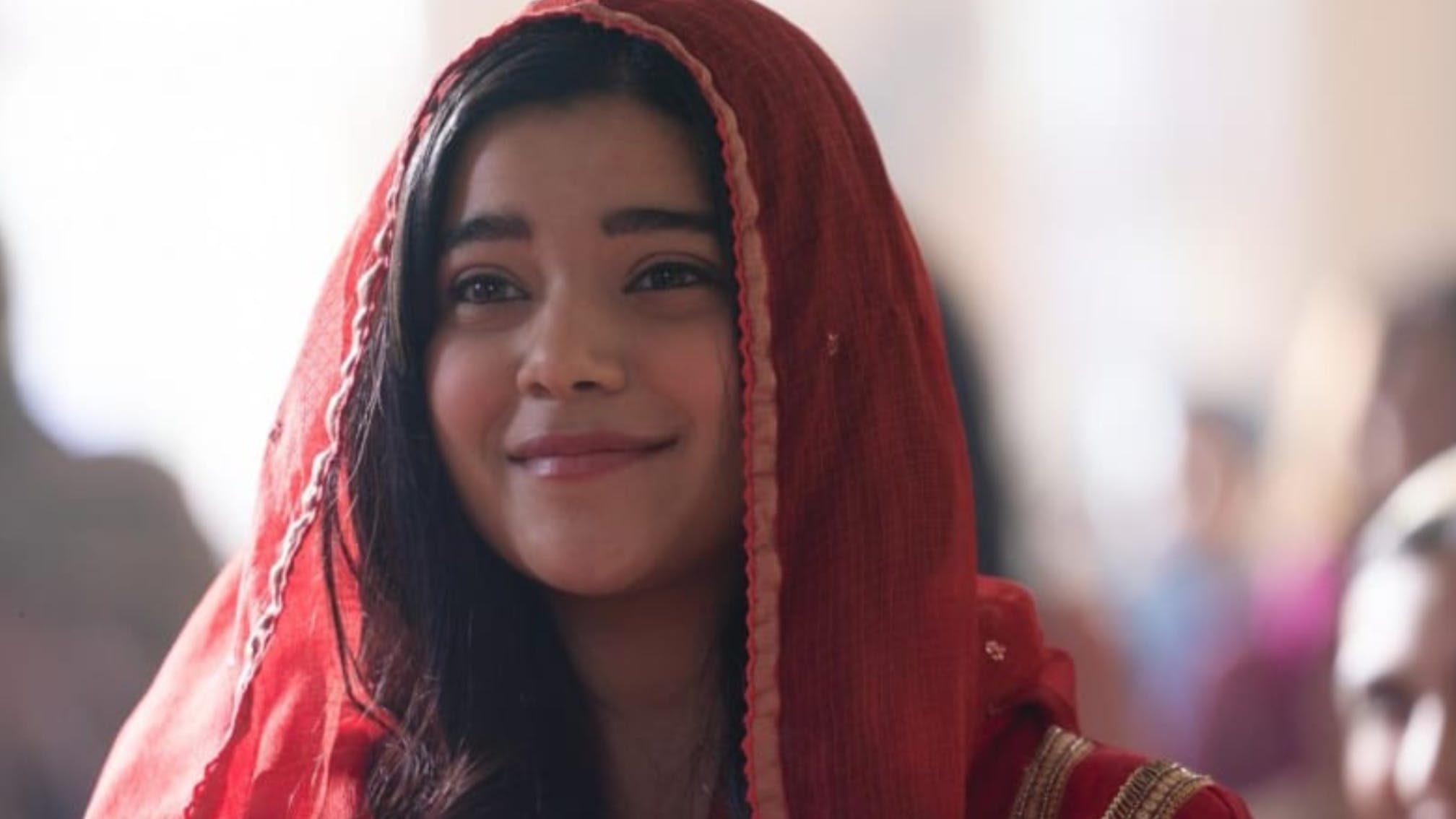 “Every Pakistani family has a partition story and none of them are good,” Kamala Khan’s older brother, Aamir Khan (Saagar Shaikh), chimes in the second episode of Ms. Marvel. An incredible mini-series, the Disney+ show follows the origin story of Marvel’s first-ever American-Pakistani Muslim superhero – played by Iman Vellani – as she navigates her newfound identity and elusive past. Throughout Ms. Marvel we see 16-year-old Kamala begin to uncover more about her cultural heritage and geopolitical events, such as the India-Pakistan partition. But, it wasn’t just Kamala learning on the go – I was too. As the credits of episode two, Crushed, rolled on, the poignant dialogue between Kamala’s family continued to play laps in my mind. It’s true: every Pakistani family has a partition story, but what’s mine? Ask me about Halsey (or my favourite superhero) and I can ramble on about their beginnings for hours, yet here I was struggling to piece fragments of my own history into a clear picture.

Now, don’t get me wrong, my heritage has played a crucial role in cementing who I am – and I’m well-versed in my roots – but the topic of partition has always felt like difficult territory. Born in the UK, I’m a second-generation Pakistani-British Asian and I’ve not had to face half the trauma or sacrifices the elders in my family would have had to make. So, watching Ms. Marvel, I felt a kinship with Kamala who, largely, seemed mystified by her own past. She knew the basics – as did I – but there was more to discover.

Growing up, I visited Pakistan twice. First as a nine-year-old, largely relishing in the novelty of travelling abroad, and then again in my late teens, with a clearer appreciation of my cultural home. The notion of home, suddenly, seemed more elastic and less physical.

Pictured above: The Sheikh family

Brought up in the multicultural working-class backdrop of Nottingham, I was never too far from a mosque or a thriving South Asian community. But still, as a teen, I had felt myself slip into the strides of assimilation, weary to claim customs that proudly made my family Pakistani. It wasn’t a question of shame, but accommodation. Too often I felt notably different when I took in homemade kebabs for lunch, or as my mum encouraged me to wear salwar kameez for non-school uniform days. Now, older, it’s easier to look back and shrug off the disaffection. The nervousness as I anticipated comments at school about my food, the clothes I wore or my religion was justified, but it was also strikingly obvious how a charmingly cool superhero show like Ms. Marvel, back then, would have made all the difference. Yes, representation matters and the latest Marvel instalment effortlessly disarmed any criticism with well-researched, beautiful portrayals of Muslim and South Asian culture. I watched on as the show unapologetically coloured scenes with indicators of Kamala’s religion – from Halal food signs to detailed, considered scenes of praying at a local mosque. This was the show I had longed for as a teenager.

Among its brilliant scene setting, Ms. Marvel encapsulates a key fixture of the South Asian community: family. While it winds down the exciting path of Kamala’s powers, the new young superhero does something many other friendly neighbourhood saviours can’t – she shares her secret with those closest to her. Early on in the series, the significance of family is not understated. After all, Kamala’s powers are kickstarted by a family heirloom (a magical bangle), passed down by her great-grandmother, Aisha. In episode four, Seeing Red, Kamala’s grandmother, Sana, reflects on how the ruling British uprooted millions of Pakistani and Indian lives: “My passport is Pakistani and my roots are Indian. And in between is a border, built with blood and pain.” Sana’s story of being separated from her father, as the family rushes to catch the last train to Karachi during partition, is regularly revisited during the series.

Partition occurred in 1947 during the British colonial rule of India, and remains one of the biggest movements of people in history, which left thousands injured, dead or as refugees. Shortly after independence from the British Raj, the subcontinent was partitioned into two independent countries: Hindu-majority India and Muslim-majority Pakistan. Disney, surprisingly, doesn’t shy away from mentioning the violent legacy of partition or how its generational trauma seeps into Kamala’s own origin story. If anything, Ms. Marvel pays homage to the interconnecting facets of her American-Pakistani and Muslim identity and this quasi-historical approach makes Kamala all the more interesting as a unique superhero.

While I’m underwhelmingly lacking any kind of, well, superpowers, Kamala’s reflective journey into her past made me consider my own. Both of my parents have connections to Pakistan. My mum, Samina, was born in the UK, while my dad, Nadeem, came from a small rural town in Jhelum, Pakistan. Born to Abdul Rashid Sheikh and Raj Begum in 1963, a good 20-something years after partition, he’s the youngest of nine siblings, some of whom are old enough to remember the devastation that partition left on the family. So, after that particularly moving episode of Ms. Marvel (and with Eid on the horizon), I found myself booking a train ticket home prepping for a big conversation.

Truth be told, there’s no easy way to redirect small talk about Taylor Swift into how the British savagely contributed to the devastation of millions, including your familial elders. And, like thousands of others, the tales of disruption were horrifyingly true. For my dad, as a child in Pakistan, conversations about partition usually surfaced on Pakistan’s Independence Day (August 14) or during light-hearted sporting rivalries between Pakistan and India.

“My mum used to bring it up because my dad never spoke about it until I was an adult. I remember vividly being told that [my parents] had to leave their home, in Azad Kashmir, at night when they realised they were in danger,” my father explains. “My parents had to leave everything behind, only picking up a few essentials because they had to walk all the way from Kashmir to the check post. They buried valuables and money in a corner of the house which apparently they never found afterwards because the house was ransacked. The most striking thing to think about is that [my family], and many others had to leave everything behind.”

The fate of Kashmir – which is now largely disputed territory – shifted and my grandparents quickly reckoned with the reality of having to migrate to Pakistan, as my dad recalls being told, “The ruler of Kashmir, at that time, decided to side with India. As there were Muslim-majority areas that wanted to go to Pakistan, the locals started an uprising, which involved a lot of young people, including my dad and some members of the family. A lot of people were brutally killed and injured, while some people had to flee the area because of their safety.”

The acknowledgement of partition in a major-budget series, like Ms. Marvel, is not to be taken for granted. While UK education systems glamorise the British Empire and the harrowing legacy colonisation left, our school-mandated lessons eagerly skip over the real-life histories that deserve to be told, notably stories from partition and the Windrush Generation. So, as I ask about the huge pop-culture moment of Ms. Marvel (and Disney) focusing on an American-Pakistani Muslim story, I’m reminded that our histories are only deemed valid when decidedly recognised by the West.

“For the people of the subcontinent, partition has always been a big topic. There were millions of people who are affected,” my dad explains. “People were displaced, people lost everything and not just Muslims. People who were living side by side, there were friends, and there were interfaith marriages as well. Lots of people lost their lives and so many atrocities happened at that time [and] that is what Ms. Marvel tries to explain with what happened during partition. A lot of people still think it shouldn't have happened, but if you look back, even now, you can see the effects of it today.”

Pictured above: Nadeem and family

At the heart of it, Ms. Marvel effortlessly crystalises the experience of navigating cross-identity experiences as a young new generation South Asian woman. Tacking on religion, culture, generational trauma and personal ancestry, finding who you are isn’t easy for a teenager or a 20-something. But, as each episode closes out with a wonderfully culturally in-tune credit track, I’m warmly reminded of the compassion imbued in each string of dialogue, on-screen scene or playful character run-in. Series creator Bisha K Ali put together a palette of episodes that unashamedly celebrate Muslim identity and an unflinchingly honest look at our collective histories. And, that alone, gave me the nudge to revisit my own origin story. I’m so grateful it did.

All episodes of Ms. Marvel are available to stream on Disney+