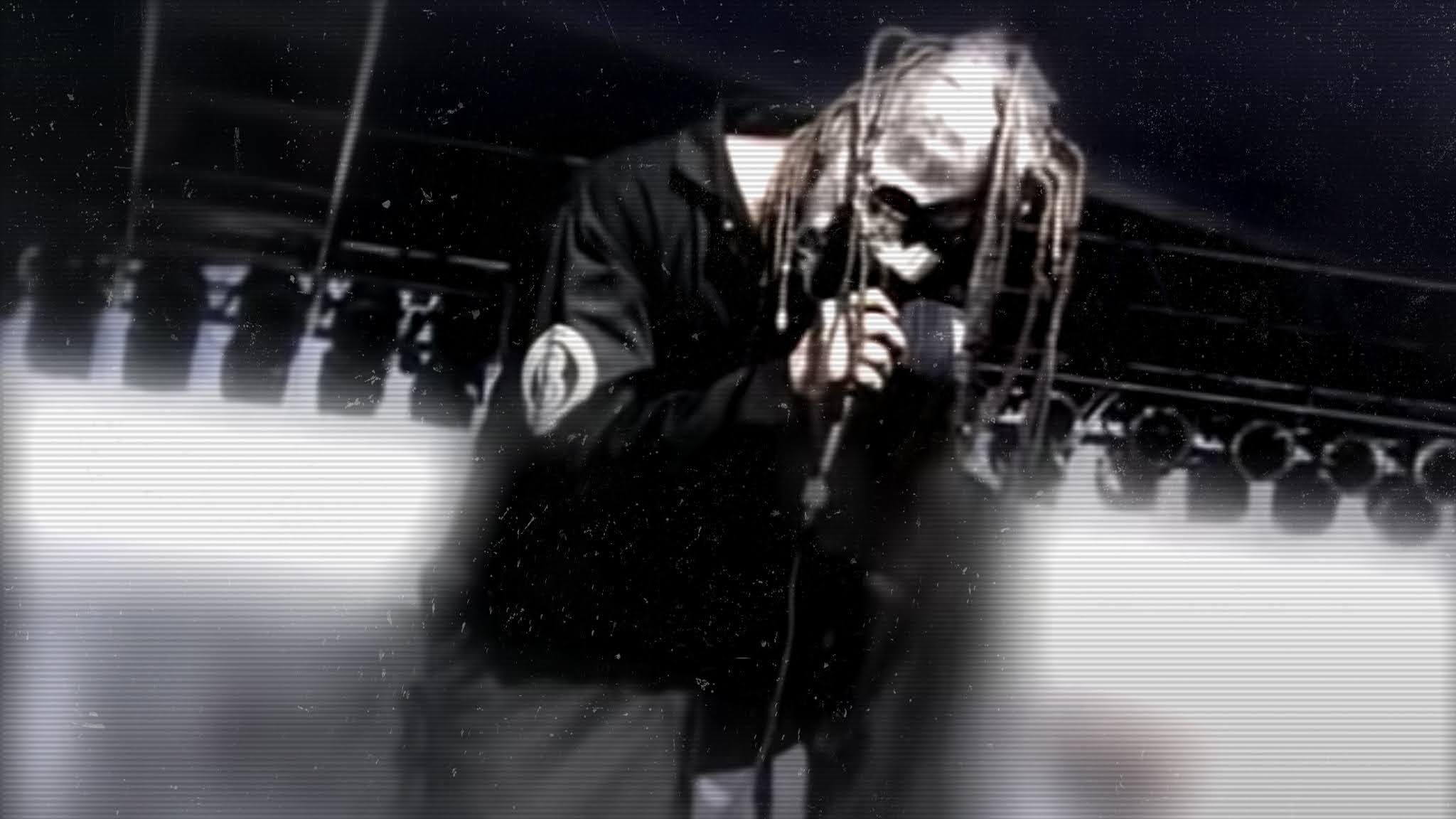 Outside the BI-LO Centre in Greenville, South Carolina, a concerned mother proudly displays a homemade sign that reads, ‘Black Sabbath promotes thrill killing, rape, murder, cannibalism, homosexuality, death and suicide’ as a small but fervent crowd are whipped into convulsions of frenzy by the fire and brimstone rhetoric of Reverend Stan Craig. In the heart of the Bible Belt, enraged by the promise of an upcoming visit by the Brummie metal legends, tensions are running dangerously high.

It swiftly follows scenes of visceral chaos as metalheads, melting in the scorching hot summer sun, discover their own something to believe in, thanks to nine freaks in boilersuits and grotesque horror movie masks, urging them release their collective pain, anger and frustration, with 30 minutes of unholy musical mayhem. Two tribes, two different churches, and more similarities between them than either side would care to admit, these were typical scenes throughout the summer of 1999, as Ozzfest bounded its way across North America in the travelling metal circus’ fourth consecutive year.

Metal and the mainstream had been on collision course for quite some time, thrust into the spotlight once more after two young students opened fire at Columbine High School, Colorado on April 20, claiming the lives of 12 fellow classmates and one teacher before taking their own. As had been the case in the country all throughout the ‘Satanic Panic’ era more than a decade ago, and again in the misjustice of the West Memphis Three trial just six years before, metal music erroneously bore the brunt of the blame for youth gone grimly astray and societal issues that had been left to fester. The world was on a precipice, feeling ever more violent and broiling with rage. Even the turn of the new millennium, it was feared, would see planes fall from the sky and nuclear disaster thanks to the mass hysteria surrounding the so-called Y2K bug. The world was rapidly changing and metal was caught up in the slipstream, about to witness a changing of the guard of its own.

All of this was captured wonderfully by serial rock movie chronicler Penelope Spheeris (Wayne’s World) in her anthropological documentary, We Sold Our Souls For Rock’n’Roll, which is now sadly lost to rights wrangling and licensing red tape, although grainy pirated copies still surface on YouTube from time to time. It was conceived of as an unofficial update to her excellent The Decline Of Western Civilization trilogy, presenting unfiltered and judgement-free fly-on-the-wall footage thanks to unparalleled access to everyone involved. This was a time before the Osbournes became reality stars on MTV. In America, Ozzy’s prevailing public image was still that of a madman who bit the heads off bats rather than the soon-to-be cuddly curmudgeon who’d chase dogs around his mansion. Long before his wife and manager Sharon reinvented herself as TV talent show queen, this was Ozzfest as revenge and reaction to Lollapalooza, which had snubbed Ozzy in 1996 for apparently being “uncool”. Taking cues from Donington’s famous Monsters Of Rock events yet predating the first Download Festival by several years, Ozzfest gave metal fans their own summer mecca in which to worship, and the documentary captures the genre celebrating its rightful place as an outsider haven. It’s the defiant roar and snapshot of a long-standing artform relegated to the margins of music history, treated with almost borderline disdain as the black sheep of the rock family. Asked what her proudest achievement was in 2014, Sharon singled its creation out for praise above all else in her career.

“When somebody tells you you can't, and you're not good enough, and then you go out and do it, it's a good feeling,” she told ET Canada.

Ozzfest ’99 was meant to mark the final-ever performances of the original Black Sabbath line-up on U.S. soil, as a kind of victory march while promoting their Reunion record, released the previous year. Time would ultimately make a mockery of that plan of course, but even without the added spice of this being the last chance to watch metal’s day-one dons, Ozzfest ’99 felt special. Landing smack-dab in the middle of the nu-metal boom, the travelling roadshow offered a springboard for burgeoning careers and a platform for classic artists alike, featuring incendiary performances from the likes of System Of A Down, Fear Factory, Deftones, Static-X, Godsmack, Primus, Slayer, Rob Zombie and more. There was one band who would stand taller than all, however, destroying every stage they stomped onto that summer. As word-of-mouth spread like a bushfire, it became increasingly clear that metal was about to be redefined entirely by the unstoppable emerging juggernaut of Slipknot, whose self-titled debut album dropped at the height of the hype on June 29, right in the middle of the tour. Footage of their impact can be seen in the live music video for lead single Wait And Bleed, capturing those anarchic, sweat-drenched Ozzfest showings, but even that pales in comparison to the reality. The world hadn’t seen weirdos quite like these before, nor had metal ever played host to such a mammoth cast of colourful characters. It’s easy to take for granted now – so familiar are we with them, so human are they, so part of our cultural fabric has the spectacle become – but in 1999, nine masked, numbered figures making a riotous noise and flailing all over stages at great danger to themselves felt revolutionary in its power. Make no mistake, Slipknot were a phenomenon, and that phenomenon was forged in the fires of Ozzfest.

There’s another clip from Penelope Spheeris’ movie that offers a hint of the feeling in the air as their presence became ever more obvious in the world. It shows a chorus line of all nine members walking in the National Mall area of Washington D.C. to the bemusement of onlooking tourists, national guardsmen and the excitement-cum-fear of fans giggling and screaming as they suddenly realise the band are in their midst. The director asks one of the kids’ parents if she knows who the band is.

“Yeah, Slipknot,” she grins, “they have taken the imagination of all the children, young people, the eighth graders who are not really human anyway…” before the camera cuts to one of such fan who can barely contain himself. “Slipknot rules and I cannot wait to go to Ozzfest!” he yells.

It was Slipknot who would ultimately make Ozzfest ’99 such a legendary event. In their emergence at the very moment the genre’s progenitors were apparently bowing out, it felt like a symbolic passing of the torch and the scene had unwittingly crowned worthy new keepers of the flame. Looking back on the experience in 2016, Slipknot vocalist Corey Taylor acknowledged its life-changing impact.

“When Ozzy hugged me for the first time, it was like being blessed,” he gushed. “We learned a lot on that tour because 1999 was the first time we really stepped onto the national stage. We had no idea that word-of-mouth was really getting around about us.

“In West Palm Beach, Florida, this sea of people came towards us and we were like, ‘What the hell?!’ and from that second, we were the band to see,” Corey added. “We didn’t really understand what was going on. We would’ve been okay with just making albums, touring, having fun, but that day we knew that there was something crazy going on – something special.”

Two days after the Ozzfest roadcrew had taken down the stages and packed up the last of the festival equipment, Woodstock ’99 kickstarted and wrote itself into the history books for all the wrong reasons. The three-day event is often regarded as a musical nadir of sorts, in large part because of infamous stories about the abhorrent things that were happening offstage. Marking the death of the ‘90s, taking with it all the promise of a decade that began with so much hope, feminist populism, and the riot grrl movement, all that idealism was suddenly left in tatters. It would be wrong to deny that Ozzfest wasn’t plagued by at least some of the same problematic issues (again, check We Sold Our Souls For Rock’n’Roll for some eye-opening evidence), but it left a far greater and more meaningful positive legacy.

Ozzfest ’99 found the world of metal and the mainstream in the grip of an oncoming collision and in the fallout, each would once more retreat from the other in the ensuing years. If it was billed and supposed to be a farewell to its originators in Black Sabbath, it also witnessed the birth of its next superstars in Slipknot. With that, a pivotal moment in metal and music history was born, as an oncoming digital reality was ushered in (file-sharing site Napster launched on June 1) and the world welcomed its ferocious new overlords with increasing devotion.

Four years later Download would launch. In 2012 Slipknot would eventually pay homage to those vital proving grounds, with the creation of their own travelling metal festival, Knotfest. So much of what we know and love today sprung from the troubled times and winds of change in 1999. What scores of conservative religious right protestors fail to recognise about metal is that artists such as Black Sabbath and Slipknot represent a force for good in the world. It gives fans young and old an outlet to focus all of their negativity, and a place to feel welcomed, seen and understood. Metal helps avoid horrors like the Columbine shooting happening. In 1999 such a force for good emerged into view and in the clamour to demonise the genre as something that several generations have proved it resolutely is not, it may be worth considering just how much worse off the world might be without it.