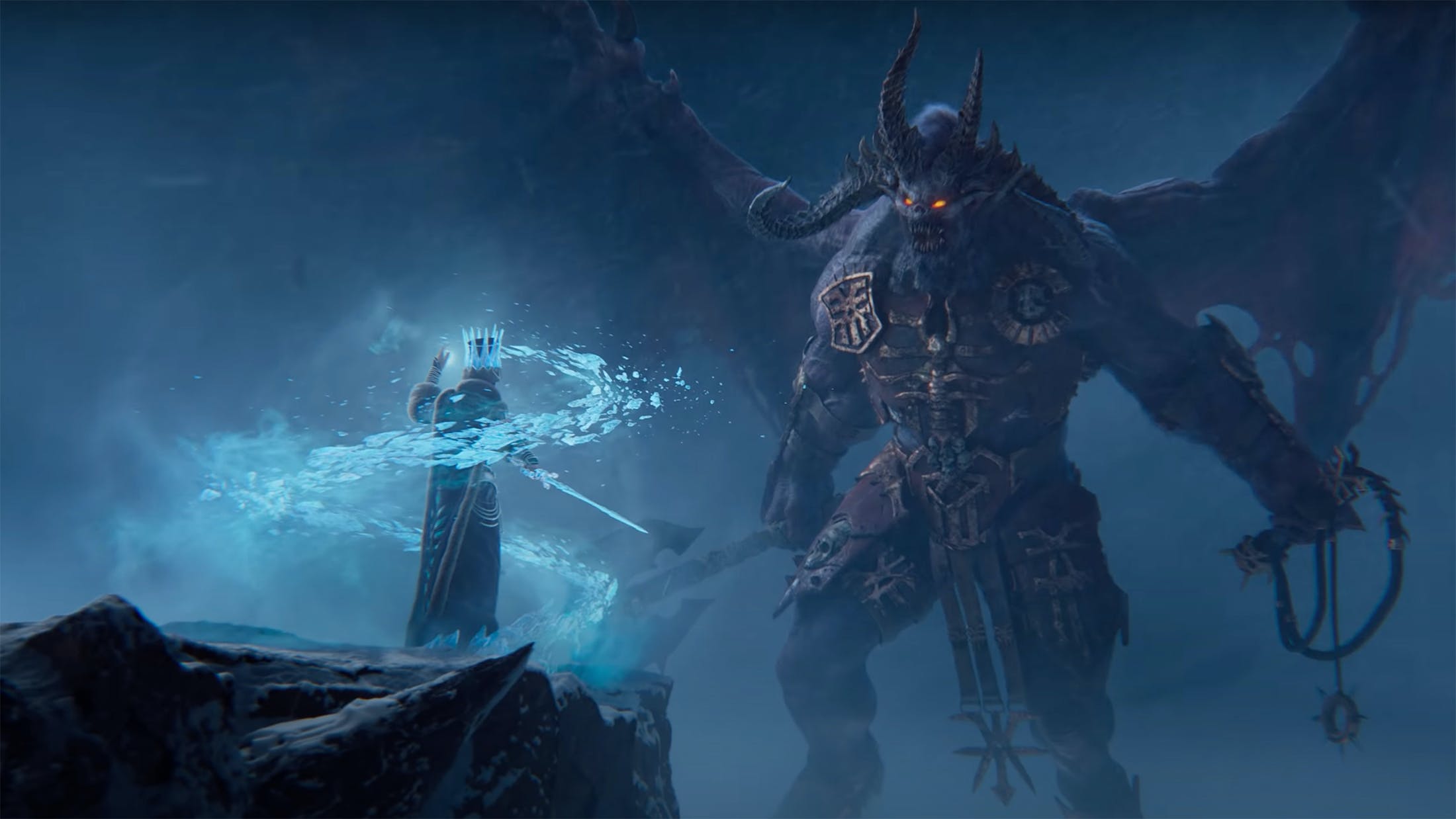 Okay, I’ll be honest with you. I wasn’t interested in Creative Assembly’s Total War games until they teamed up with Warhammer in 2016. Something about the early Total War games titles (Shogun, Rome, Spartan) were a bit too real, too historically accurate and not otherworldly enough for me. Who wants to command a bunch of humans when you could be commanding Lizardmen, Elves or Skaven? Who wants to go back to the dusty old past when you could be fighting battles at the turn of the 42nd millennium… in space?!

I digress; we cannot actually go to the 40K universe in Total War: Warhammer 3 because the game is set in the Warhammer Fantasy universe. A bit like how Metallica and Slayer both fall under the thrash metal genre, despite sounding worlds apart, 40K and Fantasy both sit under the Warhammer umbrella but are distinctly separate universes with their own pros and cons.

A simple way to distinguish between the Fantasy and 40K universes is by the weapons. Fantasy is set in a Medieval-esque time long before 40K, where Elves and Orcs use swords, bows and (ahem) warhammers to smite their enemies. Think of it as a darker Lord Of The Rings, like if the fellowship started listening to black metal and worshipping the Witch King. The 40K universe features modern tech such as guns, tanks and spaceships to crush the opposition in a grim futuristic sci-fi setting (with an emphasis on the fi, and a very light sprinkling of sci).

But what does this have to do with video games? Isn’t Warhammer played on a tabletop with dice, rulers and painstakingly painted miniatures?

Yes. The Warhammer franchise originated as a tabletop game in 1983 and was heralded as being similar to D&D (if D&D stood for Dakka and Dakka). It has since gone on to be the most popular tabletop miniature wargame in the world, and in 1995 Games Workshop concluded that the dark fantasy settings and tactical gameplay of the tabletop game would lend itself well to the video game format. And thus, the PS1 title Warhammer: Shadow Of The Horned Rat was born. Great decision, GW! The Warhammer world fits perfectly in the gaming world, with over 20 Warhammer video games now released – including the hotly-anticipated Total War: Warhammer 3 and Blood Bowl 3 set to drop in February. It’s an exciting time to be a Warhammer fan, whether you play on a tabletop or a PC.

Like many, I started my Warhammer journey by tentatively setting foot in a Games Workshop store. My eyes laid upon the swarms of ethereal creatures in the window display and I was super intrigued. One hour later, I left the store excitedly clutching a starter set of models and a small collection of paints in a snazzy, branded carrier bag. I was drawn to the less-favoured Age Of Sigmar format because the models were prettier, the game was faster and it felt more accessible. While diehard 40K fans might knock Age Of Sigmar, I think it’s a brilliant way to introduce newbies to Warhammer as it’s significantly less intimidating. Age Of Sigmar stands like a big ‘fuck you’ to the gatekeepers. Warhammer for all! Yes, even the casual player.

Another great entry point to the world of Warhammer is through video games. You don’t have to read a rulebook as thick as Gojira’s guitar tone to play the video games. You don’t have to know the lore or have dice… or even have friends! Lone gamers can enjoy the real-time strategy gameplay of the Total War: Warhammer series without the hassle of organising meeting up with people to play with. In this regard, Total War: Warhammer is pandemic-proof!

From an investment standpoint, the Total War: Warhammer games are great because you only need to buy the game to play. It’s widely acknowledged that armies for tabletop Warhammer cost a small fortune; plus there’s rulebooks, paint, scenery and dice required. Sometimes I wonder how often the hefty price tag of Warhammer miniatures puts newcomers off, so a game like Total War: Warhammer is a great way to dip your toe into the lore without breaking the bank.

While one could argue that a video game cannot offer the same creative fulfilment as assembling and painting miniatures, there are loads of mods available for Total War: Warhammer where you can really make your army your own – ranging from the Ultimate Chaos mod, which introduces different champions and heroes to the game, to immersive battle banners that enable you to customise your units. There shall be no beige banners for you, commander!

Although tabletop Warhammer is a fun way to hang out with people and a great way to make new friends, with custom online battles where up to four players can battle together against the AI, the social element is not entirely lost on Total War: Warhammer either. Two players can also play in co-op mode to campaign as the same race, so the invitation is open should anyone wish to serve under a Chaos God with me!

Speaking of races, TW:W3 will launch with a total of seven races:

There are also two races that defend the mortal realm, if good guys are your thing. There’s Kislev – a new race introduced by Total War, and Grand Cathay who are a large empire ruled by immortal dragons. Finally, the seventh race is Ogre Kingdoms – who are available as a pre-order bonus. They’ve massive, they’re mercenaries, they’re green. Think Shrek if he got really into Sabaton.

Choosing a race to play in TW:W3 is a big deal. You can pick what you think will be the most powerful faction in battle, you can pick based on diplomatic relations, or you can pick based on the story and philosophy of the race. In this regard, I am heavily drawn to Tzeentch. While the Blades of Khorne look absolutely fantastic with their flaming swords in this game, I consider Tzeentch and the way he thrives in a constant state of flux symbolic of post modernism. Yes, that’s right. I’m picking Tzeentch because he reminds me of all the great books I read for my sociology degree.

If you’re new to the Total War games, it’s worth mentioning that diplomacy, improving settlements, infrastructure and recruiting units are all integral parts of the gameplay. In this sense, TW:W3 offers a Warhammer world that’s lived in, not just a battleground.

As I previously mentioned, TW:W3 isn’t the only Warhammer game title released in February. Get your shoulder pads on for the new Blood Bowl 3, a brutal death sport game which combines fantasy American football with the latest Warhammer board game rules. There will be 12 races available to play, and I assure you Blood Bowl 3 will be as silly and fun as it sounds!

This game looks, feels and sounds like the inside of my brain. It’s so melancholy and brooding, with its gorgeous dark colour palette and sombre soundtrack. In terms of difficulty, it’s on a Dark Souls level of frustrating, but no matter how many times I keep dying in this world, it’s worth it just to spend time in it.